Accessibility links
Rosie The Robot Won't Serve Your Food, But She'll Pick It : The Salt Labor-starved farmers are now eyeing lettuce-picking robots to help with the harvest. But more robots on the farm could also spell trouble for smaller producers that can't afford them.

Rosie The Robot Won't Serve Your Food, But She'll Pick It

Rosie The Robot Won't Serve Your Food, But She'll Pick It 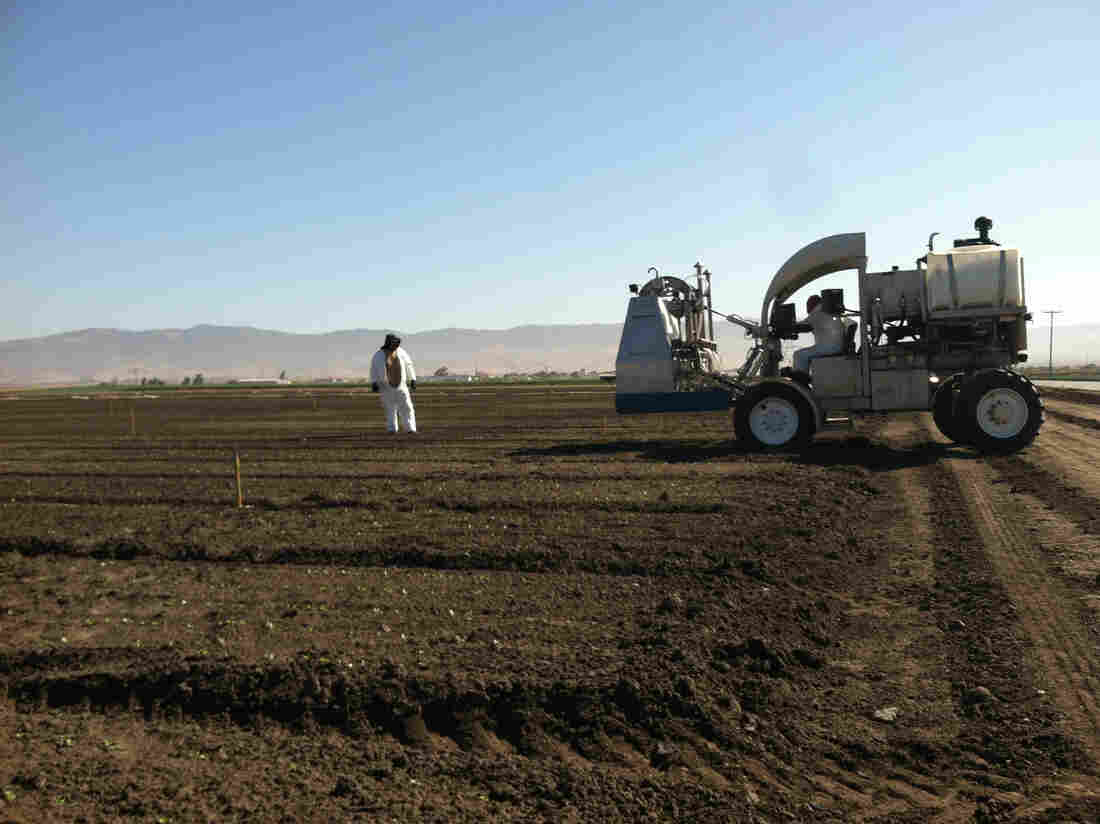 A lettuce thinner manufactured by Ramsay Highlander removes excess seedlings from the field so that others have room to grow. Just one worker is required to operate the machine. Rachel Estabrook hide caption 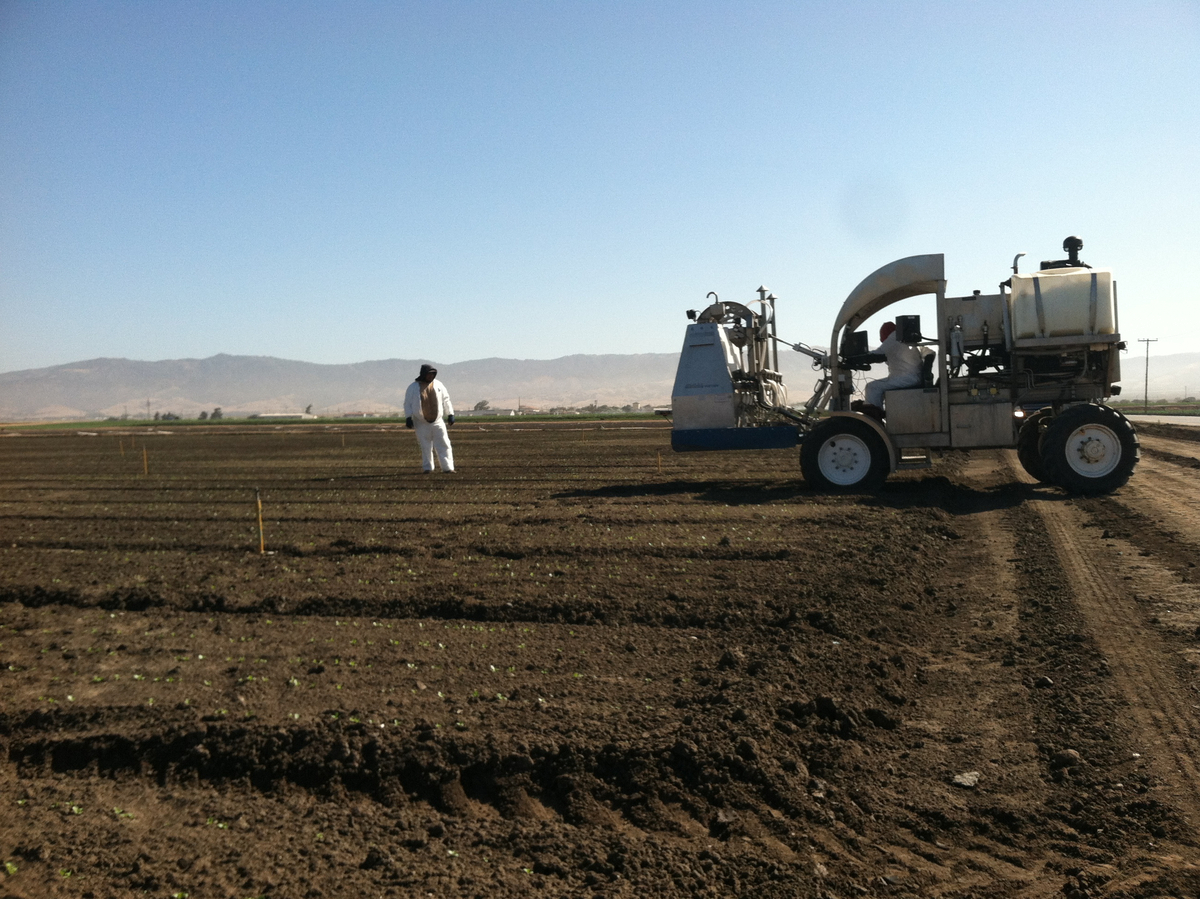 A lettuce thinner manufactured by Ramsay Highlander removes excess seedlings from the field so that others have room to grow. Just one worker is required to operate the machine.

From manufacturing to cupcake sales, companies are finding that machines can often do the job just as well, or better, than humans. But some tasks – like picking and tending to fruit and vegetable crops – have remained the territory of low-wage laborers.

But labor-starved growers are now eying machines with increasing interest.

Some 90 percent of the strawberries and 80 percent of the salad greens grown in the U.S. come from California. These crops and a lot of others have always been picked by hand because they don't ripen all at once and can bruise easily.

As NPR's Kirk Siegler reported in April, immigration policies and enforcement along the border between the U.S. and Mexico lately have meant that growers in California can't find enough workers to pick these crops.

"Over the last 10 years, there's been a new effort to restart mechanization," says Phil Martin, an agricultural economist at the University of California, Davis and curator of Migration News. 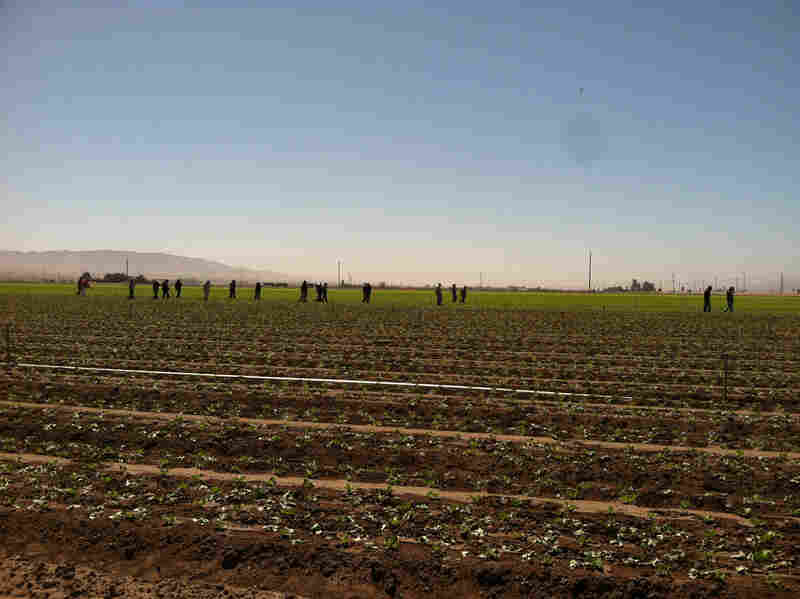 Thinning a field of lettuce without a robot requires a crew of 20 who do the same task with long-handled hoes. Rachel Estabrook/Rachel Estabrook hide caption 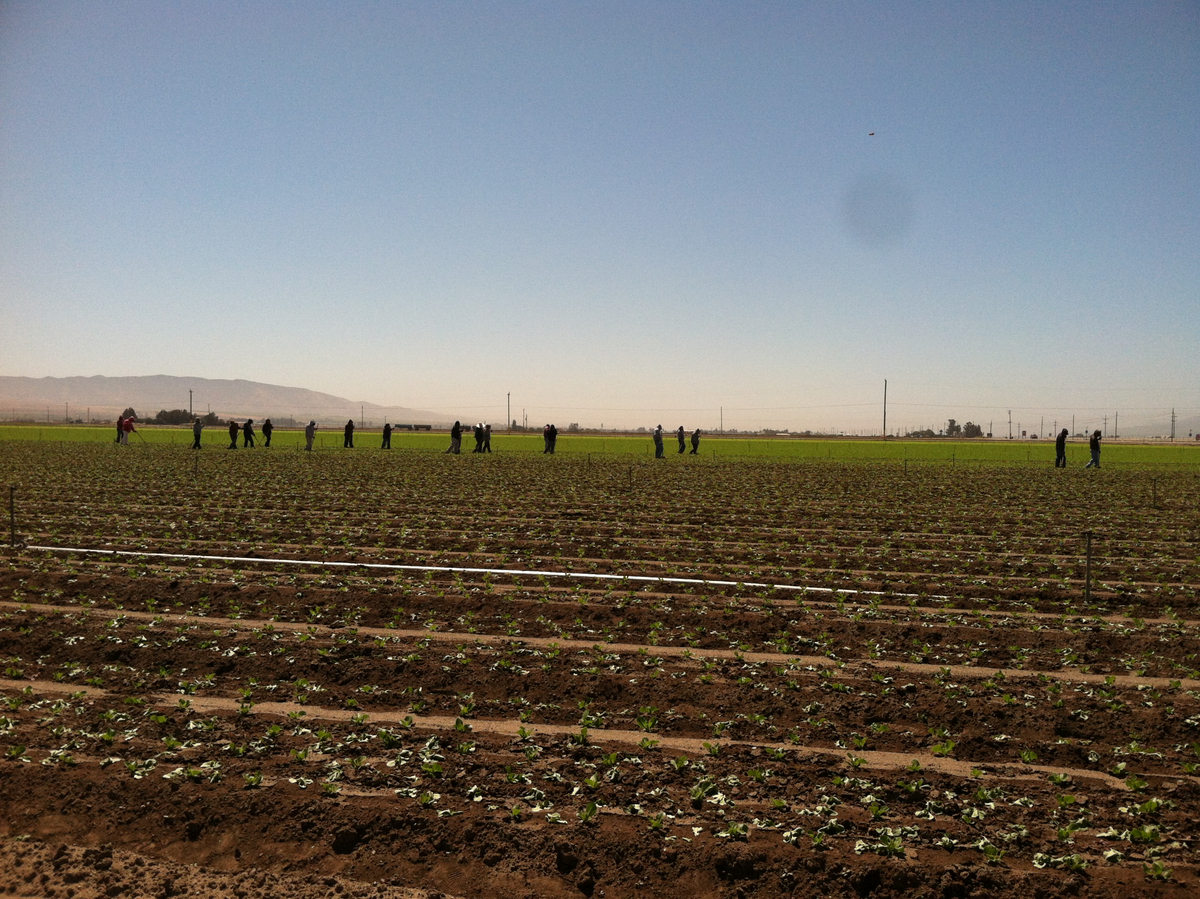 Thinning a field of lettuce without a robot requires a crew of 20 who do the same task with long-handled hoes.

That's partly because the technology has come a long way. New machines use computers and vision sensors to replicate the human ability to handle delicate crops. In recent years that technology has gotten cheaper, making it more feasible for farm use.

Consider the lettuce thinner, developed by Frank Maconachy, president and CEO of harvesting equipment manufacturer Ramsay Highlander. The machine removes excess seedlings from the field so that others have room to grow.

The Hummer-sized tractor uses a vision system to find the seedlings and sends their location to a computer on board, which uses an algorithm to determine which seedlings to save and which to eliminate. Then it zaps the unlucky ones with a concentrated shot of fertilizer, like an industrial-sized search-and-destroy robot.

The process happens very fast: a whole row of lettuce thinned in just a few minutes. And it requires only one worker, versus a crew of 20 who would do the same task with long-handled hoes.

Maconachy's company is also working on a robotic picker that seeks out a head of lettuce and then picks it — think of it as search and pick. Like the lettuce thinner, the robot picker relies on a sophisticated vision system to determine if the greens are ready for the picking. It's not quite Rosie, the TV show Jetsons' robot maid who delivers the food to the table, but it's close.

In late May, Maconachy showed the lettuce thinner to a potential buyer, Bob Thorp. He's vice president of production at Growers Express, which is a partner of the Green Giant Fresh produce brand. "The labor [shortage] is the worst that I've seen, ever since I can remember," Thorp says. "Any way we can mechanize and take labor out of the equation, we're looking at it."

But labor shortages aren't the only motivation, Maconachy says. Some producers fear new state and federal laws that require them to provide shaded areas for farmworkers during breaks, for example, or bathrooms within a certain proximity to workers. While the new requirements undoubtedly benefit workers, Maconachy says growers are worried that if they don't comply they'll be fined by the Occupational Safety and Health Administration.

More robots on the farm could also spell trouble for smaller farms that can't afford them, says Martin. The lettuce thinner starts at $250,000, and some farm machines run as much as $600,000.

"It's inevitable that if you restructure an industry, you will dramatically change who's producing and what they're producing," he says.

Martin estimates that two companies, Dole Fresh Foods and Taylor Farms, control about 60 to 70 percent of the bagged lettuce market in the U.S. "If we go to mechanization, it could go up to 80 to 90 percent." And, he says, that means "a whole lot of other guys are going to be out of business."