Accessibility links
What The Rise Of Cage-Free Eggs Means For Chickens : The Salt Promises from big food companies to switch to "cage-free" eggs have set off a supply chain reaction among egg producers. Some producers are adding more cage-free houses to their operations. But scientists are still trying to measure whether cage-free chickens are really better off. 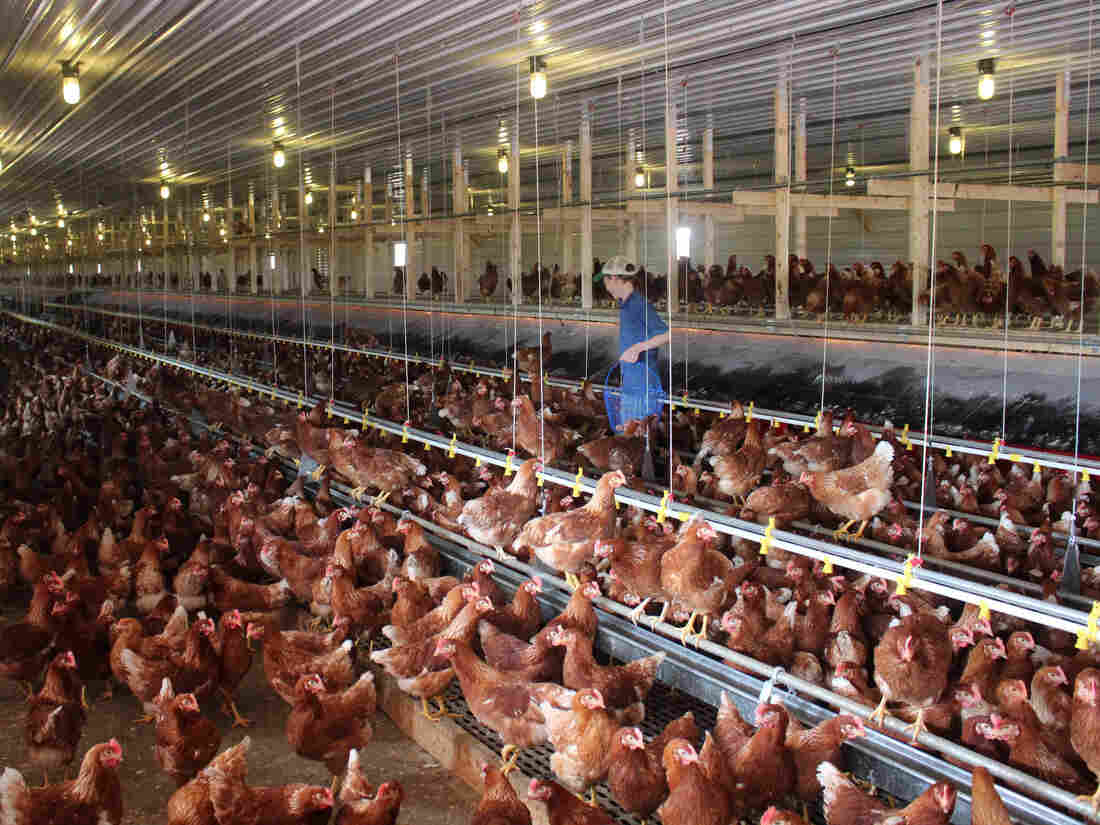 Cage-free chickens in Harold Sensenig's barn near Hershey, Pa., get to roam and perch on steel rods, but they don't go outside. Dan Charles/NPR hide caption 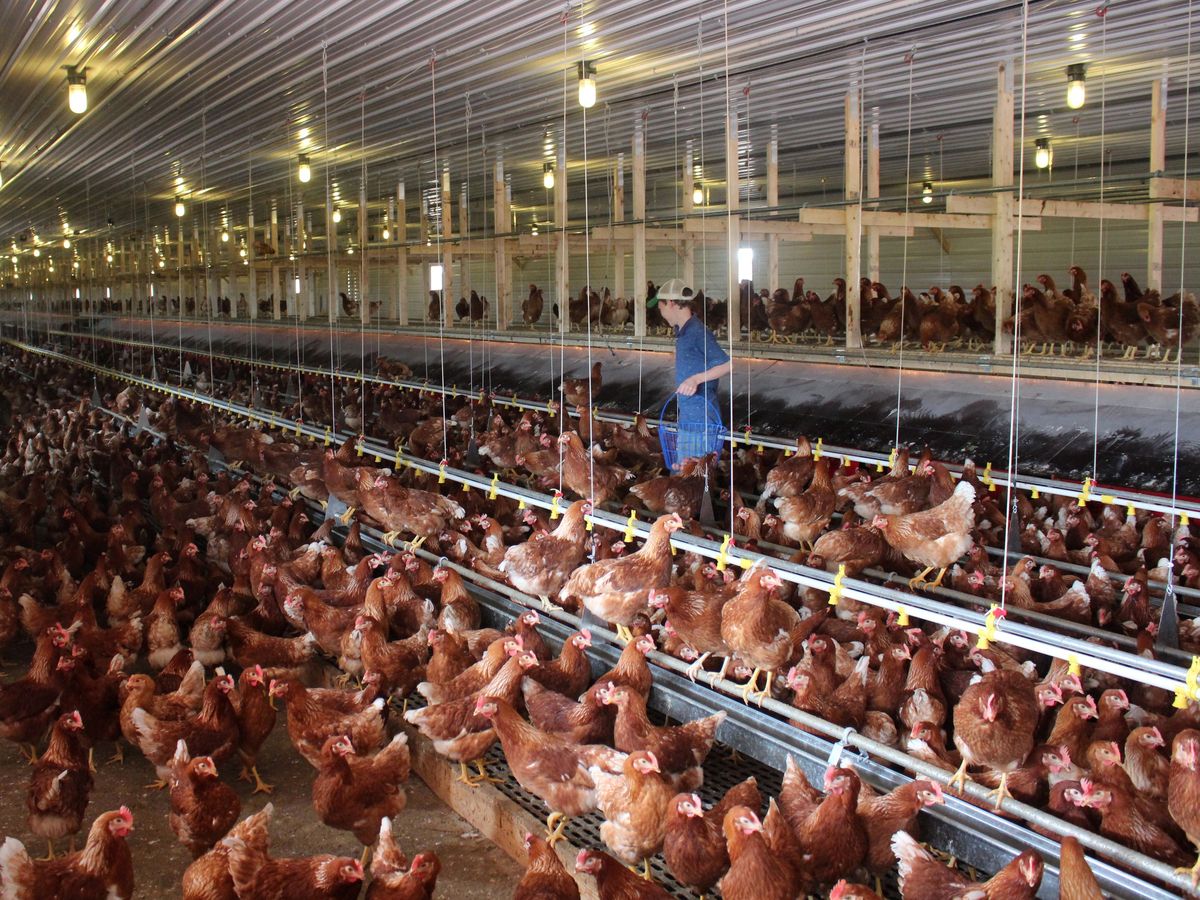 Cage-free chickens in Harold Sensenig's barn near Hershey, Pa., get to roam and perch on steel rods, but they don't go outside.

The typical life of an egg-laying chicken is beginning to change dramatically.

Ninety percent of the eggs we eat come from chickens that live in long lines of wire cages, about eight birds to a cage. Animal welfare groups have long been campaigning against these cages.

They are succeeding, and this is where the change starts. In recent years, several big food companies have promised to switch to "cage-free" eggs. They include Unilever, which sells Hellmann's mayonnaise, and Aramark, which supplies food to big companies, colleges and prisons.

Those promises set off a supply chain reaction. "There weren't enough cage-free eggs for us to do Hellmann's Light mayonnaise, initially," says Doug Balentine, director of nutrition and health for Unilever North America. "It's going to take us about five years of working with egg suppliers so that we can convert all the egg farmers, just to supply the eggs for Hellmann's mayonnaise."

Which brings us to a brand-new pair of chicken houses tucked into the rolling farmland near Hershey, Pa.

Inside one of those houses, 18,000 chickens are milling around on the floor. Some are perched on metal bars. A few are madly pecking away at the plastic covers on my shoes.

The chickens just arrived here a few weeks ago. So did the farmer, a taciturn young man named Harold Sensenig, who grew up just down the road.

"Been living here for about four weeks now. Moved in a week before the chickens came. Got married two weeks before that," he says.

These chickens aren't free-range or organic; they don't go outside. But they do get to roam around inside the house, which makes them cage-free.

Sensenig built this style of chicken house — and a bank financed it — on the strength of those promises by Unilever and Aramark. 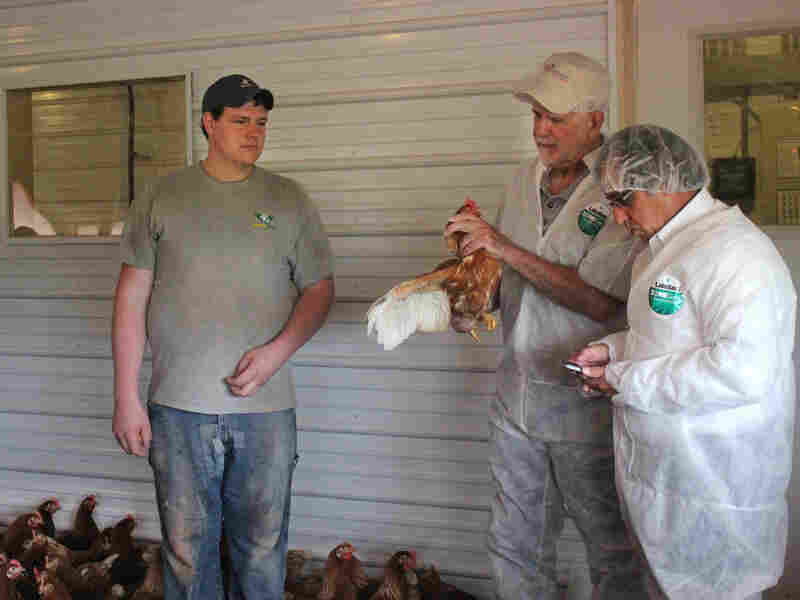 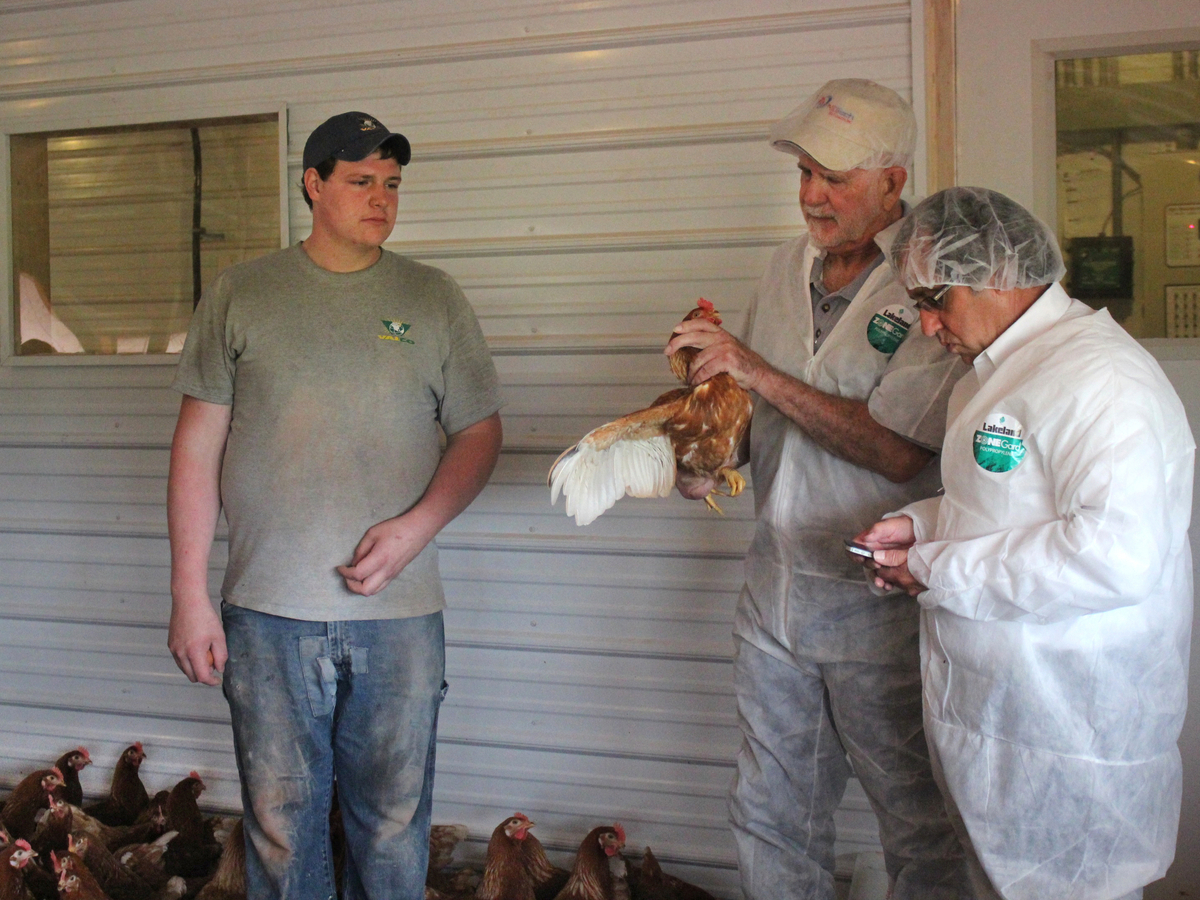 Sensenig has a deal with a local egg buyer, Sauder's Eggs, which is paying twice the going rate for cage-free eggs. Sauder Eggs, in turn, supplies those eggs to Unilever and Aramark.

"It's the demand that's driving it," says Paul Sauder, who owns Sauder's Eggs. "I mean, I wouldn't take the risk of paying double for these eggs, versus commodity eggs, if I didn't have the demand pushing on the other side."

According to the United Egg Producers, about 7 percent of all eggs now come from cage-free houses. That's up from 3 percent five years ago. For Sauder's business, it's currently 10 or 12 percent, and growing every year.

It's more expensive to produce eggs this way, Sauder says. You need more buildings for the same number of chickens, because you can't stack the birds on several levels in the same house. There's also more work involved — somebody has to walk through the chicken house collecting stray eggs that chickens laid on the ground, rather than in their enclosed nests.

But the industry, he says, is responding to "the perception that cage-free is a better product than eggs from a conventional cage house."

Sauder pauses. "From a nutrition standpoint, the egg is the same," he says.

Yet as Sauder stands amid the crowd of chickens, he does seem pleased. You're closer to the animals, he says, the way farmers were 50 years ago. You also get to see chickens acting more like chickens, dust-bathing or perching on long metal rods up near the ceiling. "You come in here at nighttime, those things are all full up there, because birds migrate to the top perches. That's where they feel safest," he says.

There's still some argument, though, about whether that means the chickens are really better off.

In Michigan, scientists are carrying out a large-scale experiment with three different full-scale chicken houses. One has chickens in traditional cages; one has so-called enriched cages that are bigger, and include nests and perches; and a third house is cage-free.

"We have over 300 cameras mounted within those systems to collect data," says Janice Swanson, from Michigan State University. She's one of the scientists in charge of the study, which is funded by a consortium of egg producers.

Swanson says they are measuring every aspect of each system: how clean the air is; how healthy the chickens are; how much it costs; how each system affects a chicken's welfare.

On the third floor of Michigan State's animal sciences building, teams of students are carefully watching videotapes, counting how often the chickens do things like spread their wings or peck each other.

Swanson says it's important to measure all of these things because there may be trade-offs between different goals.

For instance, in cage-free systems, chicken litter builds up on the floor, so chickens scratch around and dust-bathe in their own waste. "There are concerns about that, relative to egg safety," he says. "Now, for the hen's behavioral repertoire, this is cool! We can get down and dust-bathe, and so on."

The experiment has been running for a year now, and the scientists have released some preliminary observations. Here are just a few: Hens in cages were cleaner, but cage-free chickens kept more of their feathers. Cage-free hens may have had more freedom, but twice as many of them died during the year.

Swanson says it's too early to draw any firm conclusions, though, because these observations are from just one production cycle.