Accessibility links
Moonshine As Moneymaker? Eastern Tennessee Will Drink To That : The Salt Locals in eastern Tennessee have been making moonshine for centuries. But until a few years ago, it was pretty hard for most distillers to do so legally. Now, entrepreneurs have turned their moonshine heritage into a way to boost the local economy and help farmers, too. 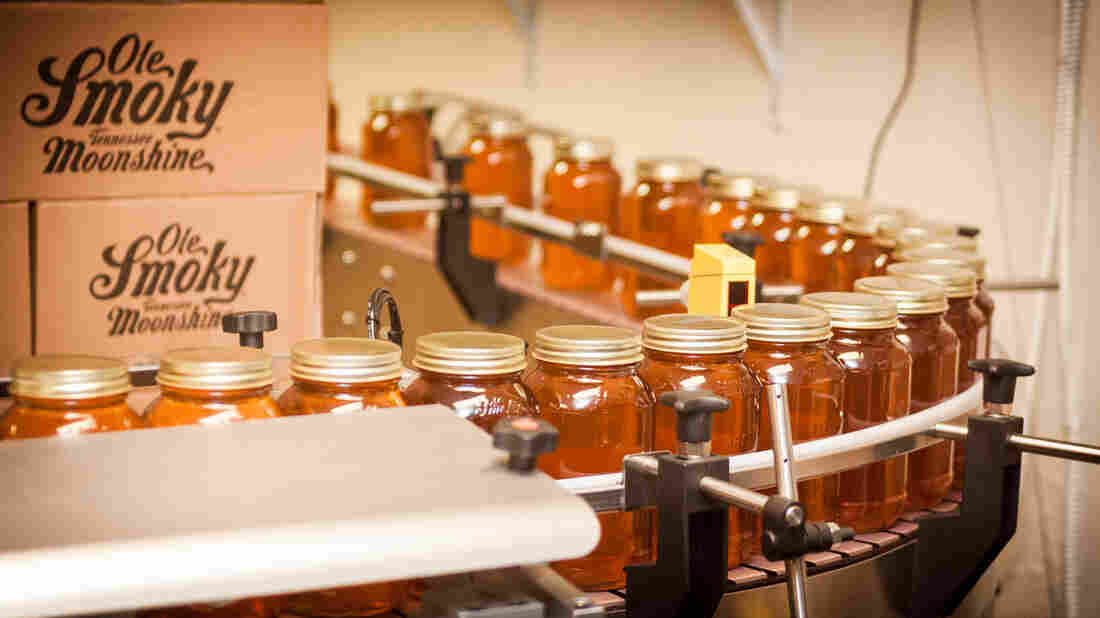 Ole Smoky has helped revitalize the local economy in Gatlinburg, Tenn. The distillery sources its corn, jars and other packaging locally, and employs more than 150 people. Van Gallik/Courtesy of Ole Smoky hide caption 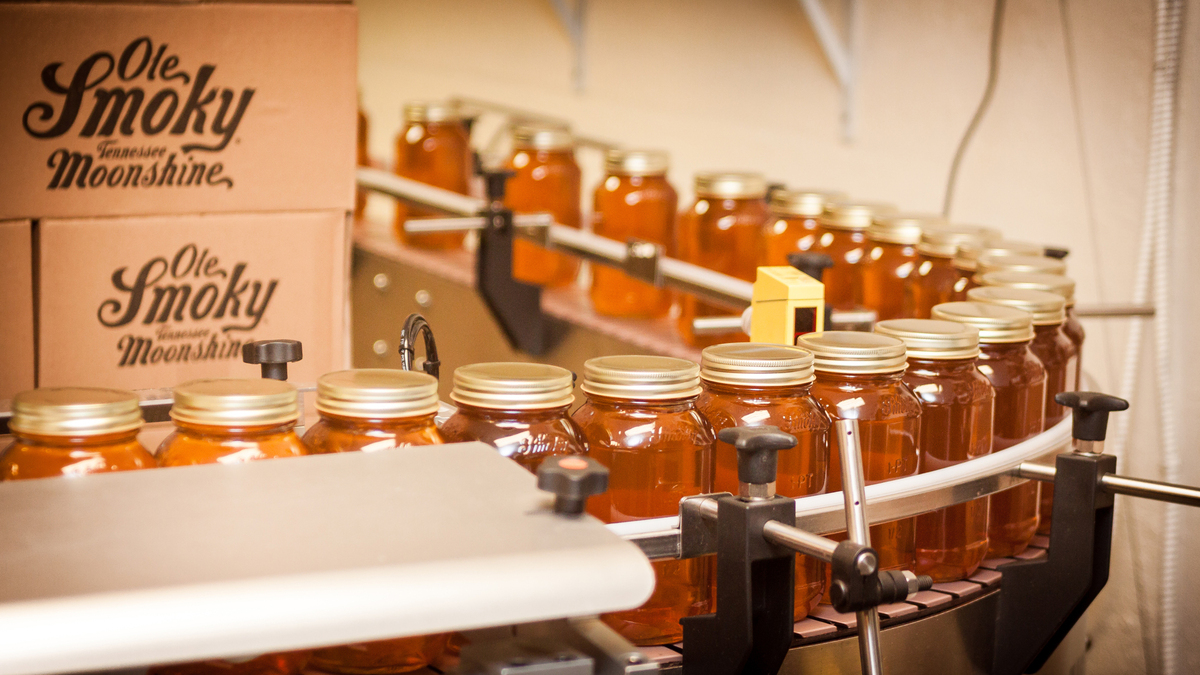 Ole Smoky has helped revitalize the local economy in Gatlinburg, Tenn. The distillery sources its corn, jars and other packaging locally, and employs more than 150 people.

Moonshine is trendy these days, with distillers large and small throughout the country offering up their own variety. But in eastern Tennessee, locals will tell you they've got the real "white lightning." Everyone seems to boast a family connection, and everyone has his or her own recipe.

"It's a local point of pride, a big part of eastern Tennessee family tradition," says Robert Cremins, a college student from Knoxville. Many in the region identify themselves with moonshine, Cremins tells The Salt. "I grew up hearing stories about moonshine."

In the land that surrounds the lush Smoky Mountains, with their towering white pine trees, hooch, white whiskey, moonshine — whatever you call it — has a rich heritage. Neighboring states also lay claim to the moonshine tradition, "but the one that centers around the Smoky Mountains is the most traditional," says author Max Watman, who grew up in Virginia and has chronicled moonshine culture.

"Some regions, like southern Virginia," he tells us, "clasped onto the historical aspect of moonshine to try to promote it, but it hasn't become as central to the character of the region as it has with the Smoky Mountains. In eastern Tennessee and the Smokies, you find people who respect the production of moonshine as a craft and its folkloric traditions. That's what's different about it."

That history has even been memorialized in "Rocky Top," one of Tennessee's state songs, which references moonshine stills hidden in the hills. But until four years ago, tough laws made it virtually impossible for distillers outside of three counties to get a license for alcohol production. Entrepreneur Jim Massey acted as an independent lobbyist to change the law in 2009, making it easier for small distillers to enter the market.

"It was less about alcohol production and more about a business we're famous for, that we have a competitive advantage in," Massey says. 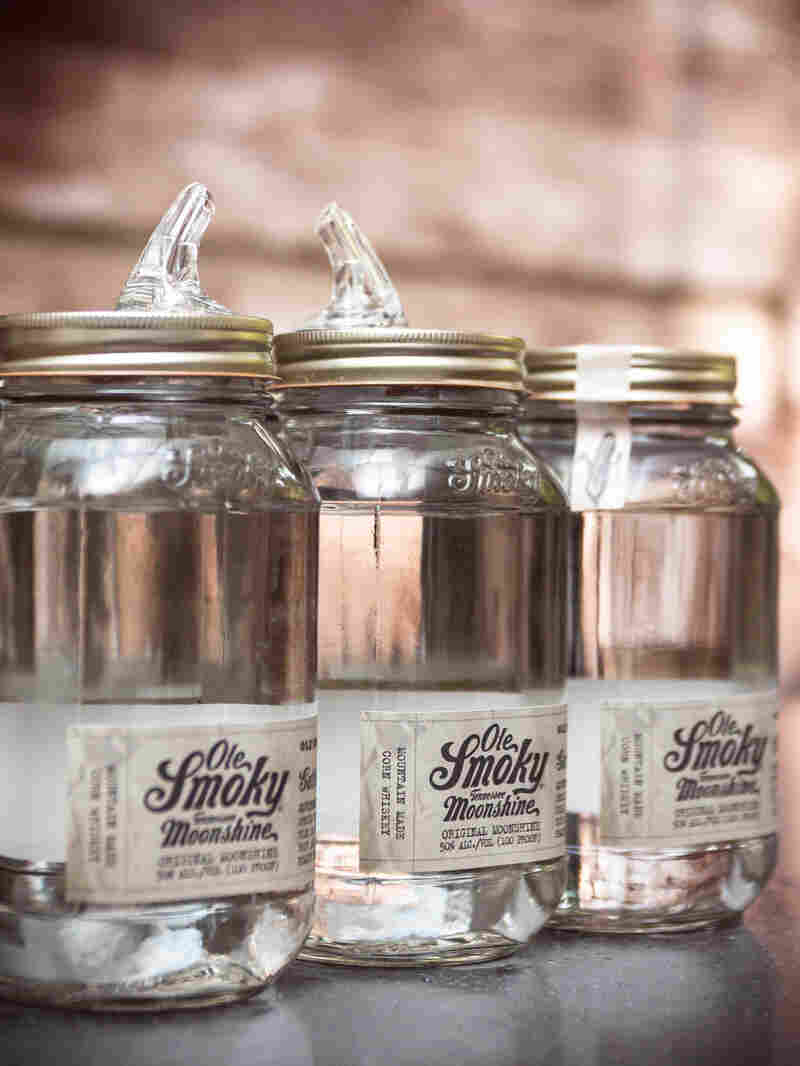 Ole Smoky's bottles are designed in keeping with the local eastern Tennessee tradition to "pass the jar." Moonshine was typically drunk out of old Mason jars. Van Gallik/Courtesy of Ole Smoky hide caption 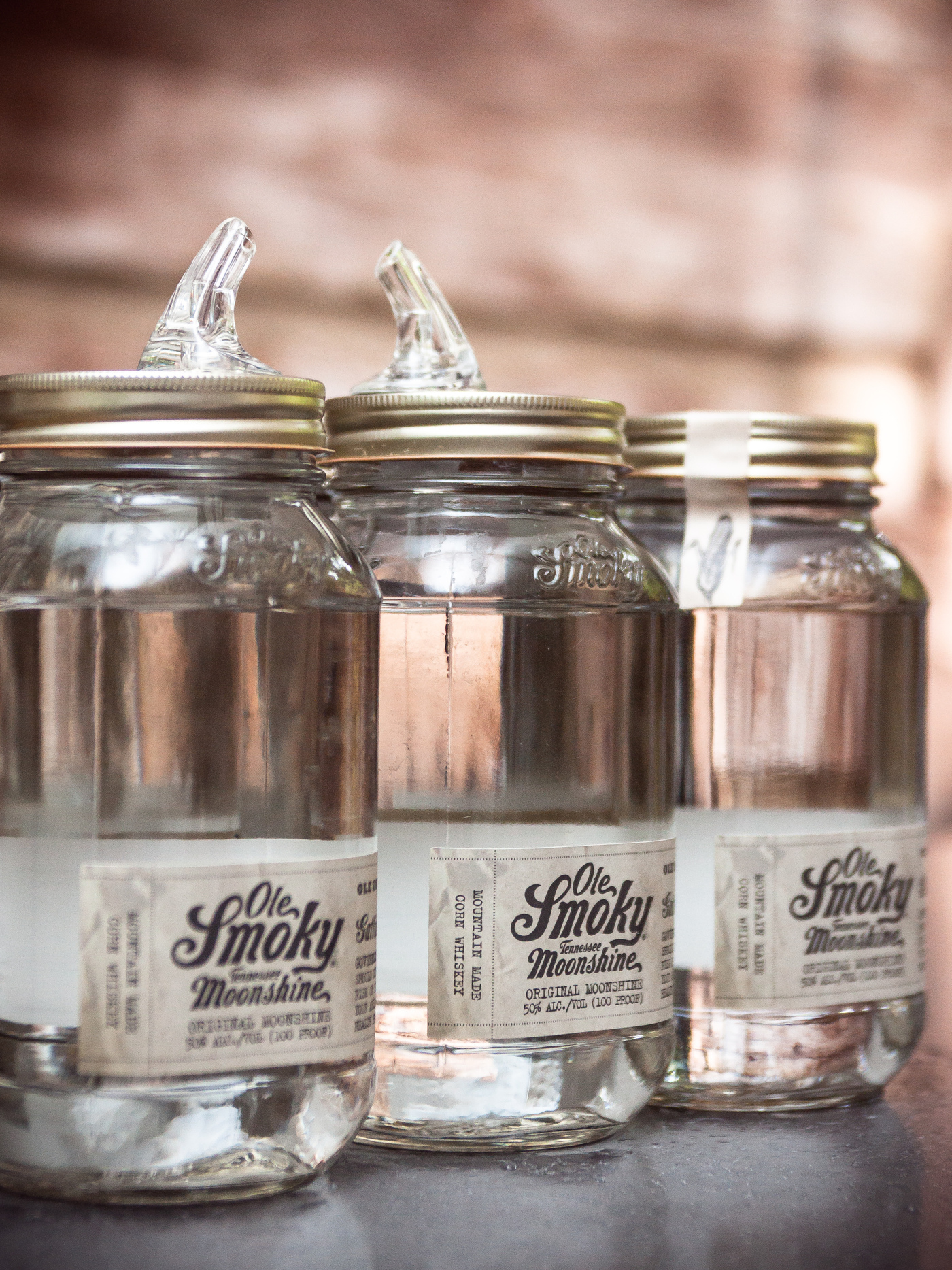 Ole Smoky's bottles are designed in keeping with the local eastern Tennessee tradition to "pass the jar." Moonshine was typically drunk out of old Mason jars.

Massey's efforts were well-timed, coming as Tennessee and other states were looking for ways to generate taxable revenue and job growth to fight the recession.

Joe Baker, a criminal lawyer who traces his roots to the earliest settlers of eastern Tennessee, corralled two lawyer buddies to open the Ole Smoky distillery in Gatlinburg. Most of the town's 4,000 residents earn their living from the throngs of tourists who come for the Smoky Mountains and the endless fudge shops.

"I thought it would be cool if we could do something involving moonshine and tourism and share this heritage," Baker says. "We have an incredibly rich history with making liquor, and a lot of it stems from the land and the geography. It's an important part of who we are," says Baker, whose own family moonshine recipe is 200 years old.

Of course, moonshine has long been important to the local economy. The forested mountains were a canopy for Baker's ancestors and other moonshine distillers who made their home in the Smokies well before the mountains were named a national park. Undocumented rumors have it that Al Capone used to store his liquor there during prohibition, before transporting it to Chicago.

"Every east Tennessean has their own version of Apple Pie moonshine, what it tastes like, what proof it is," King says.

The recipe is basically cinnamon, apple juice, apple cider and a few spices — it tastes like a sweet after-dinner drink. The flavoring extends to other locally grown fruits, like cherries soaked in moonshine, and peaches, King says.

"For Christmas, my family always used to give out moonshine cherries," he says. "A lot of people down here are poor, so to give a jar of moonshine cherries or peaches was a nice thing. ... Any fruit we could find, we would use."

That connection between farmers and distillers is still thriving, and has helped many battle the recession, says Watman.

"It's a market that's very focused on staying local," he says. "I can't tell you how many stories I've heard about peach farmers' crops being knocked down by a storm and the local distillery buying up that fallen crop, because they don't care what the peaches look like."

Baker sources his corn locally and employs more than 150 people. And there are tangential economic impacts — like the glass jars and paper labels he buys for his spirits from local producers, and the truck drivers paid to deliver the goods.

As for Baker's hopes to marry tourism with moonshine heritage, the proof is in the dozens of tourists sitting in rocking chairs outside Ole Smoky's bottle shop on Gatlinburg's main street, toe-tapping to the daily bluegrass band — no purchase necessary. Inside, hordes of people crowd the tasting room. Baker has created one of America's most visited distilleries, distributing to 49 states.

For moonshine proponents like Massey, Ole Smoky's success is the ultimate payoff.

"Just look at Ole Smoky," he says. "They have more tourists coming through their craft distillery than Jack Daniels in Lynchburg. There are over 2 million visitors to the Smokies each year, and all those people are there for the novelty culture. It's a win-win."