Accessibility links
Composting On The Way Up In New York City High-Rises : The Salt This summer, New York City is expanding food waste recycling into more neighborhoods, with an eye toward eventually making the program mandatory. Officials are hoping the changes will help improve on the city's dismal recycling rate, which remains stuck at 15 percent. 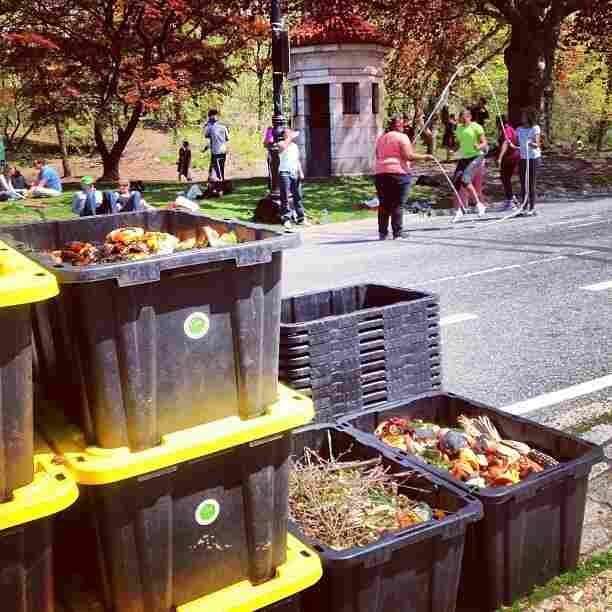 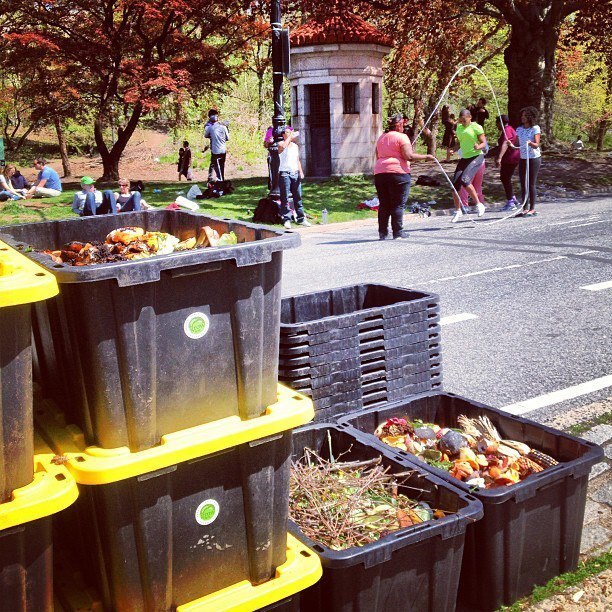 Compost bins at the Grand Army Plaza Greenmarket in Brooklyn, N.Y. are part of a pilot program to get New Yorkers to recycle their food waste.

But officials in New York want to capture and recycle more of the city's food waste — even in some of the nation's most vertical neighborhoods. They're expanding a pilot program that's also trying to encourage composting by turning greenmarkets and libraries into drop-off sites for residents' food waste.

New York's experiment with high-rise composting is already underway in a handful of Manhattan apartment buildings, and officials say they plan to reach 70 buildings in the coming year. Helena Durst is a vice-president at the Durst Organization, the company that owns a luxury rental building near the Hudson River. The city has given each household in the building a small brown plastic bin for organic waste that might otherwise go in the trash. Durst say there's a reason the bin only holds a single gallon.

"The reason we don't want this to be large container is because what organic waste can be known as it putressable waste," says Durst. "Which means it becomes putrescent if it stays in one place too long with too much of itself."

In other words: It stinks. Smell is usually the first issue that comes up when you mention compost to apartment-dwelling New Yorkers. But city officials say recycling food waste could improve the city's aroma.

Gonen says food waste represents 20 percent of what New Yorkers throw away. So if the city can divert that waste, it'll create a useful byproduct while also saving taxpayers money.

"Ten years from now, people will look back at the fact that we were exporting our food waste to landfills, and spending $100 million a year," Gonen says. "And they'll look back and wonder what were we thinking paying all this money."

New York is not the first city to turn its food waste into fertilizer. It's already required in a number of cities, including San Francisco and Seattle. In fact, when it comes to recycling in general, New York lags far behind other big cities, with a recycling rate of just 15 percent.

But Gonen says thousands of new recycling bins are about to appear on city streets.

"It becomes habit-forming," says Gonen. "People see the recycling containers on the street corners. They participate with them. They seem them, and they go home, and begin to recycle."

If the city is ever going to be a national leader on recycling, a lot of New Yorkers will also have to welcome those little brown compost bins into very small apartment kitchens.

New York's food waste recycling program is voluntary, at least for now. Mayor Bloomberg is expected to announce more details on a citywide plan in the next few months. But city officials say that if the expanding pilot program continues to succeed, they can imagine a day when the Big Apple will send all of its apple cores to a big composting facility.