Accessibility links
Avocado-Fed Pork? Why Animal Feed Is Going Gourmet : The Salt Some farmers say they are willing to shoulder the extra cost and time of specialty feed because they're turned off by conventional feed mixes. A few will even take custom feed requests from chefs and diners. 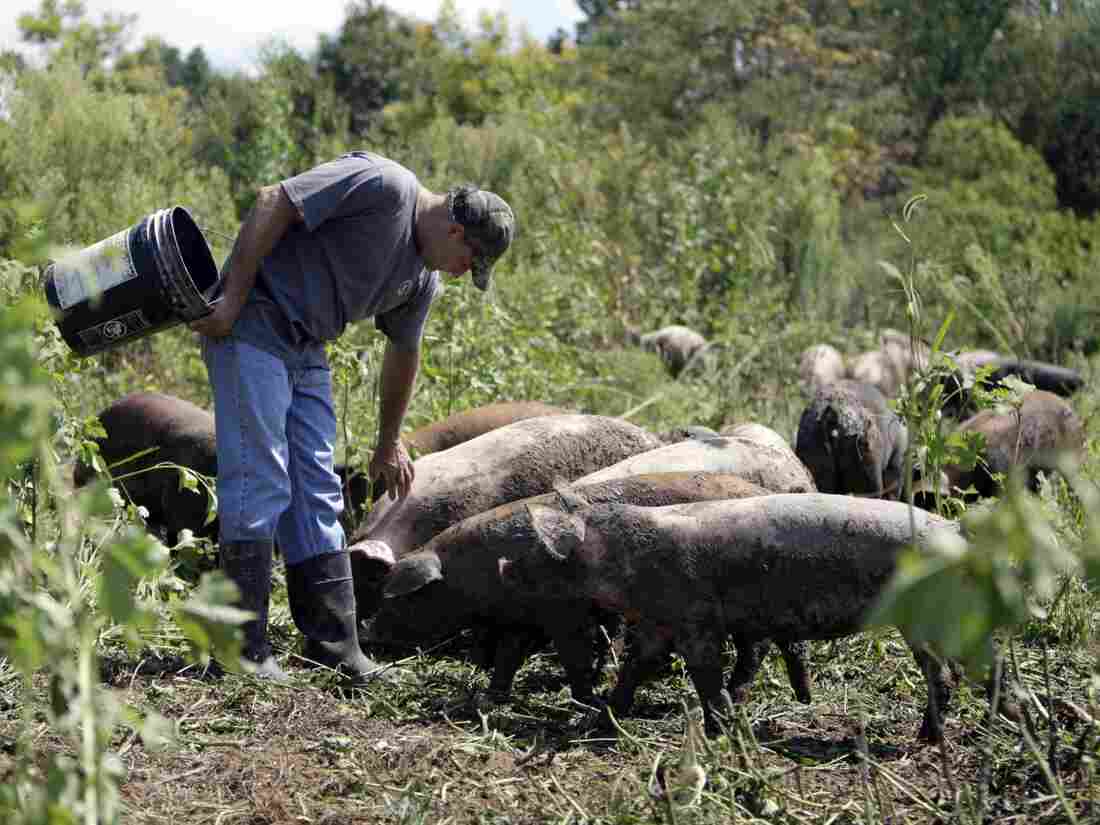 Russ Kremer with some of his hogs on his farm in Frankenstein, Mo., in 2009. Instead of buying conventional feed, Kremer grazes his hogs in a pasture, and grows grains and legumes for them. Jeff Roberson /AP hide caption 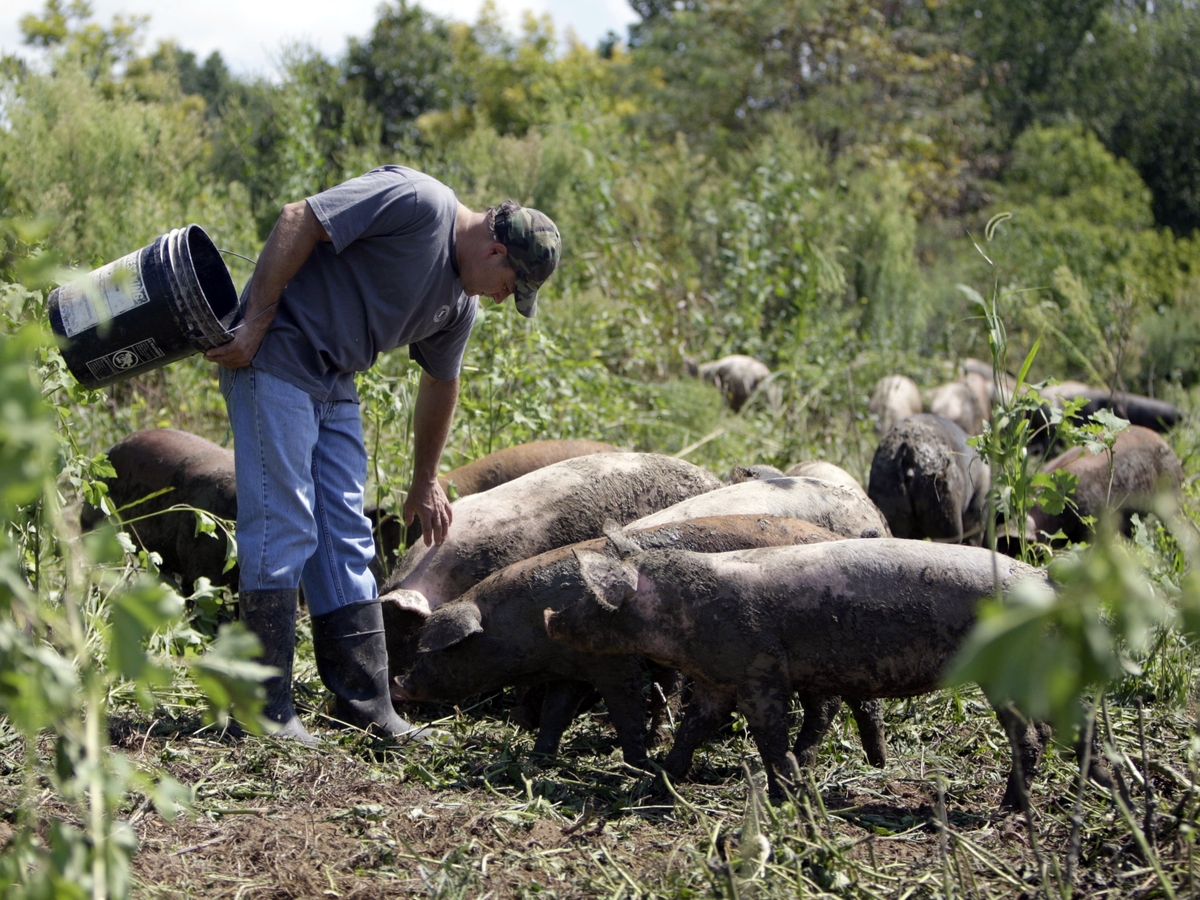 Russ Kremer with some of his hogs on his farm in Frankenstein, Mo., in 2009. Instead of buying conventional feed, Kremer grazes his hogs in a pasture, and grows grains and legumes for them.

Peanuts, flax, sprouts and avocados: It's not the menu at a health food deli, but the menu inside some barns. What's more, many farmers experimenting with these gourmet feeds are growing the ingredients themselves.

Take Russ Kremer, the Missouri pig farmer whose operation served as the inspiration for the 2011 Chipotle ad. Kremer hasn't bought commercial animal feed in 30 years. Instead, he grazes his hogs in a pasture, and grows (or buys from neighbors) grains and legumes to supplement their nutrition.

Kremer and some of the other farmers developing specialty feed say they are willing to shoulder the extra cost and time to produce it because they're turned off by conventional feed mixes. The conventional mixes are what most of the hogs in the U.S. consume, and can include commodity corn and soybeans, blood protein, animal waste and rendered fats, according to Kremer.

Kremer also runs a co-op where farmers can pool resources to mill their own feed. "We opt for grains like barley and oats as often as possible, because most corn and soy is now [genetically modified]," he says.

The scarcity of non-GMO corn and soybeans is what led hog farmers Kelley and Mark Escobedo of South Texas Heritage Pork to experiment with peanuts.

Using their own 1950s-era mill, the farmers combine peanuts, peanut hay, and oats to boost the animals' protein intake and overall health — especially important because they raise their animals without antibiotics. The resulting meat has a delicate, nutty flavor that has helped them attract a loyal customer base willing to pay a higher price for the meat. "I've never had anyone come back and say it's not worth it," says Escobedo.

She and other farmers even take custom feed requests. Case in point: One restaurant shaped a special meal around a single hog that the Escobedos fed avocados (along with the peanut-based feed) for the last 6 weeks of its life.

"The meat was soft and delicious," Escobedo recalls. "It was the most delightful dinner I've ever eaten." (Pot-fed pigs are getting similarly rave reviews in Washington state, as we've reported.)

Farmers are supplementing animal feed with other ingredients found in gourmet kitchens, too. To boost his animals' immunity, Kremer uses oregano oil. To add omega-3 fatty acids, many cattlemen are adding the superfood flax to feed. And Nigel Walker of California's Eatwell Farm not only grows his own wheat to feed his egg=-laying hens, he also sprouts the grains for added nutrition.

Even as farmers learn to market meat from animals raised on special diets, only a small percent of consumers are willing to pay extra for it. A pastured chicken fed with homegrown grains, for instance, can cost as much as $20 to 25, compared with $10 for a conventional chicken in the grocery store.

The cost to farmers, in terms of both dollars and time, also remains significant. Kremer says he can afford homegrown feed because he saves money on veterinary care since he doesn't use antibiotics. His pigs also have a higher survival rate than average (just 1 percent mortality compared to nearly 5 percent industry-wide). But his operation is also much smaller than average, so the risks are different from a large hog operation.

Jack Lazor, author of the forthcoming book The Organic Grain Grower, and owner of Butterworks Farm in Vermont, says homegrown animal feed has fundamentally transformed his farm. Lazor supplements his dairy cows' diets with homegrown grains and feeds his laying hens kelp and soybeans he grows and roasts himself, using a recipe developed by Polyface Farm's Joel Salatin. The birds gain more weight, and the eggs are yellower, but more important to Lazor is the sense of being in complete control of what he calls the "craft of farming."

"When you're feeding an animal you can tweak it one way or the other based on the herd or the season," he says. "Plus, it just adds more meaning to your life."