Accessibility links
Your Choice In Utensils Can Change How Food Tastes : The Salt Cutlery, dishes and other inedible accoutrements to a meal can alter our perceptions of taste, according to researchers. And it might be more about our brains than our tongues. 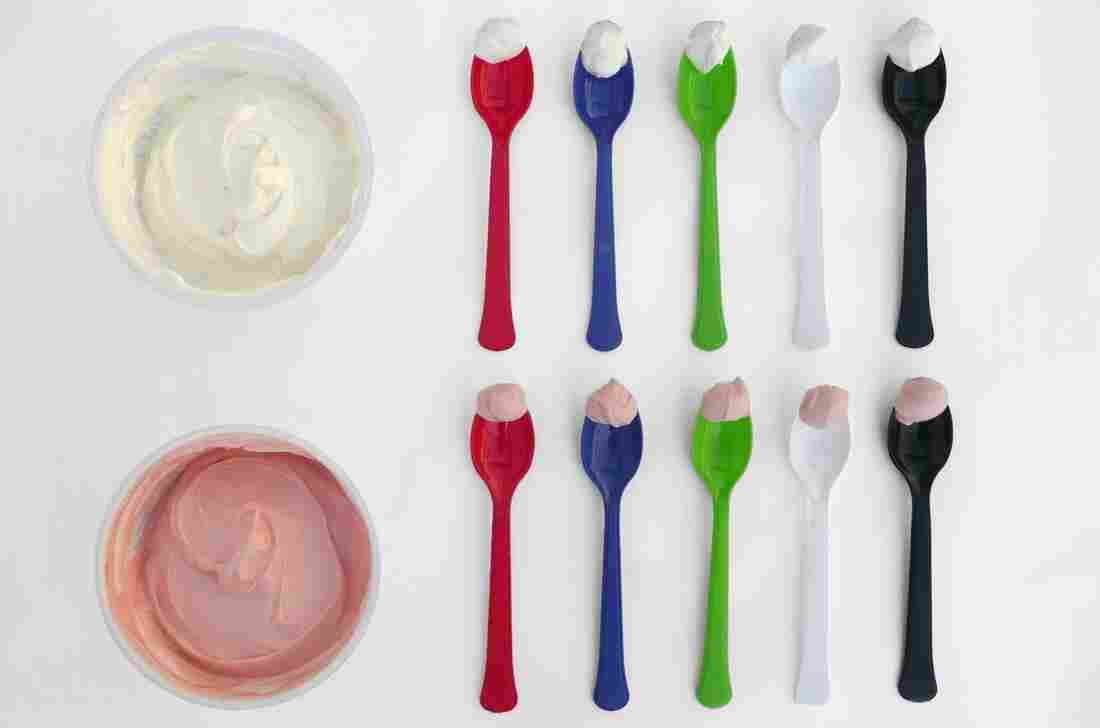 Which spoonful of yogurt looks the tastiest? Studies show people tend to eat less when their dishes are in sharp color-contrast to their food. Elizabeth Willing/Courtesy Flavour hide caption 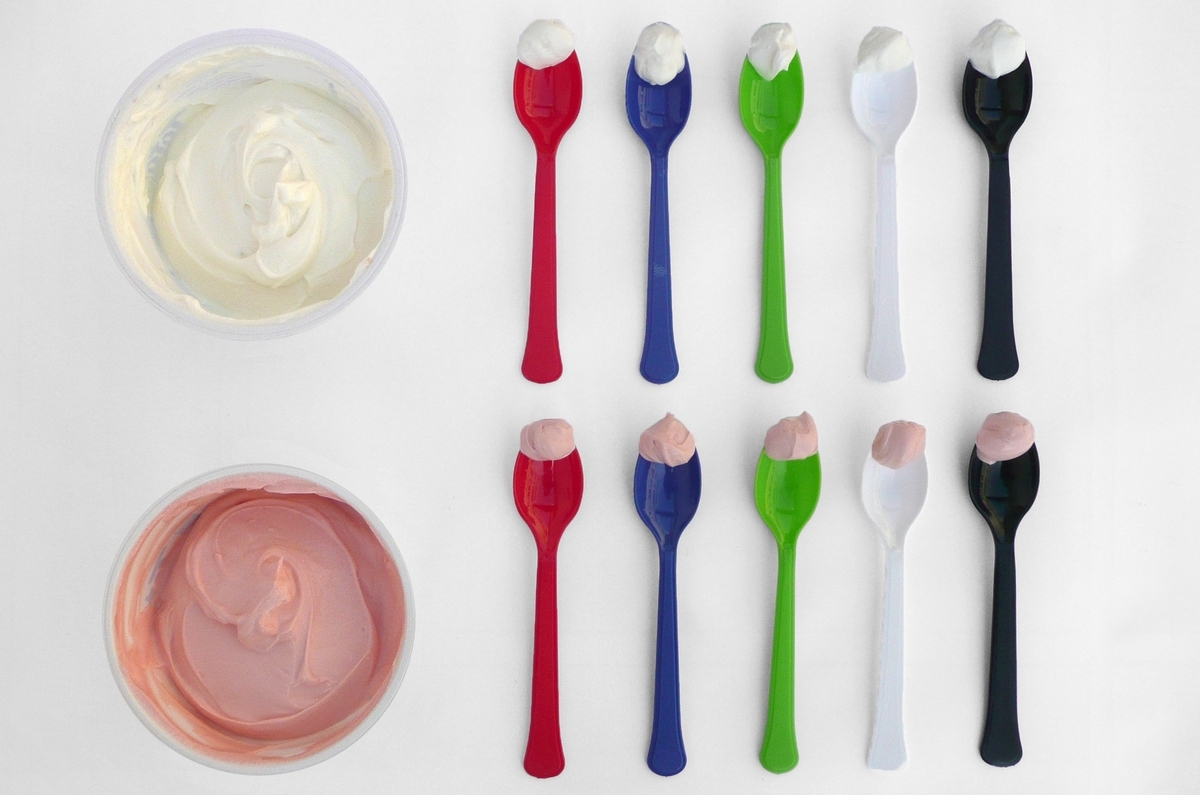 Which spoonful of yogurt looks the tastiest? Studies show people tend to eat less when their dishes are in sharp color-contrast to their food.

Being "born with a silver spoon in your mouth" has long been known to have advantages. Apparently, eating off a silver spoon also has its perks — it seems to make your food taste better.

That's the word from a group of researchers who've been studying how cutlery, dishes and other inedible accoutrements to a meal can alter our perceptions of taste. Their latest work, published in the journal Flavour, looks at how spoons, knives and other utensils we put in our mouths can provide their own kind of "mental seasoning" for a meal.

"Some of my wine-drinking colleagues would have me believe that flavor is really out there on the bottle, in the glass or on the plate," says Charles Spence, a professor of experimental psychology at Oxford University. "But I think it is much more something that we ... understand better through looking at what's happening inside the brain, and not just the mouth of the person eating or drinking."

Alterations in taste perceptions aren't necessarily the result of the cutlery itself, he says, but of the mental associations we bring to a meal. "Silver spoons and other silver cutlery, I'm guessing, are more commonly associated with high-quality food in our prior eating experiences," Spence says.

In recent years, psychologists have found that the color and shape of plates and other dishes can have an impact on the eating experience. Studies have found, for example, that people tend to eat less when their dishes are in sharp color-contrast to their food, that the color of a mug can alter a drinker's perception of how sweet and aromatic hot cocoa is, and that drinks can seem more thirst-quenching when consumed from a glass with a "cold" color like blue.

So why study cutlery? For starters, there wasn't any real scientific literature on the topic, Spence tells Linda Wertheimer on Weekend Edition Sunday. 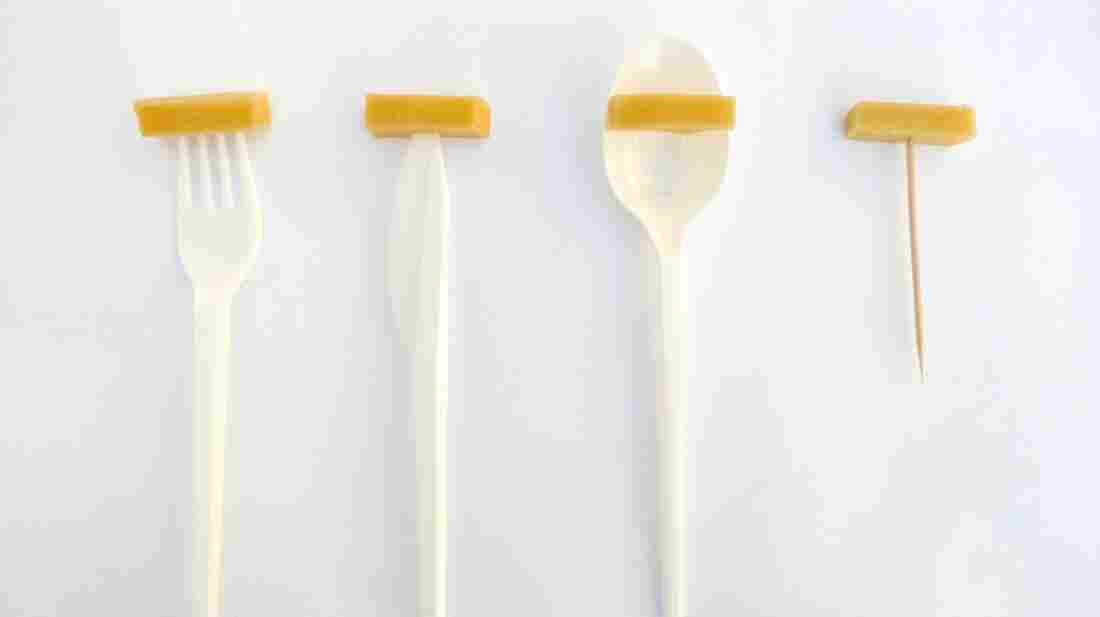 Cheese might take on a whole new flavor when you use a plastic utensil. Elizabeth Willing/Courtesy Flavour hide caption 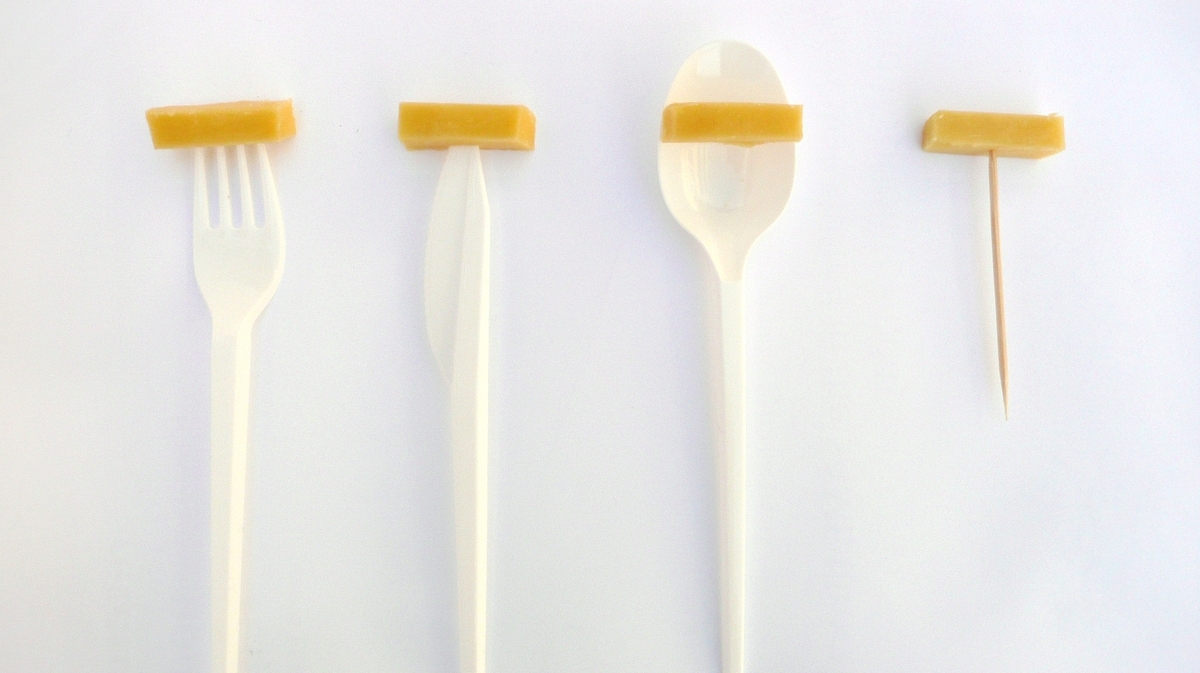 Cheese might take on a whole new flavor when you use a plastic utensil.

Or, as he put it to The Salt, cutlery is "one of the few things we stick in our mouth that others have stuck in their mouths. So it's a peculiar thing."

Among Spence's findings so far:

Such research isn't merely academic, Spence says. Food companies use these kinds of studies to inform how they package their products. And in a world where modernist chefs already pay lots of attention to how foods are arranged visually on the plate, cutlery, he suggests, presents a new frontier for fine dining.

Spence has already teamed up with some of the world's top modernist chefs, using their restaurants as real-world settings to test findings from the lab. Working with Ferran Adria, the culinary superstar behind Barcelona's now-shuttered El Bulli, Spence tells us, he learned that strawberry mousse tastes "10 percent sweeter and 15 percent more flavorful on a white plate than on a black plate." 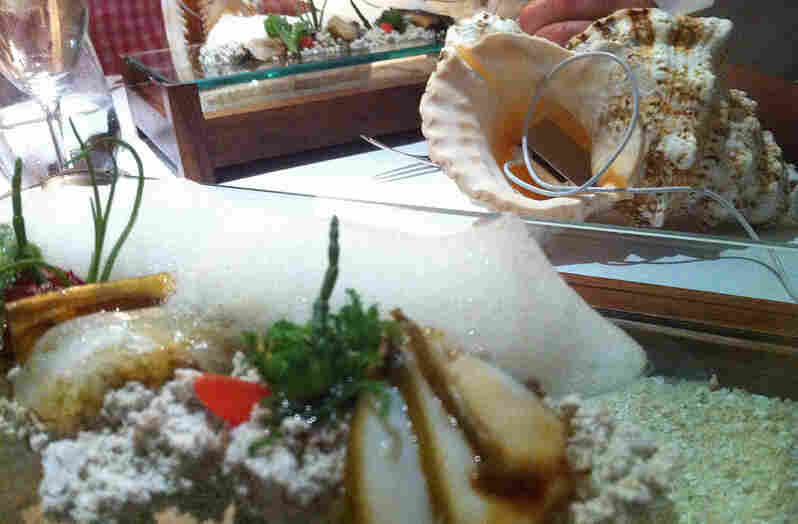 Take a bite of the "Sound of the Sea" dish and listen while you chomp. adactio/Flickr hide caption

And this summer, Spence says, he'll explore how ridged spoons impact the dining experience at The Fat Duck, the restaurant run by British celebrity chef Heston Blumenthal. A previous collaboration between the two resulted in The Sound of the Sea, in which diners eat oysters and other seafood while listening to an iPod playing the sounds of crashing waves. It's become a signature dish on Fat Duck's tasting menu.

"Maybe in a year or two," Spence tells The Salt, "we will have signature cutlery associated with this chef or that."