Accessibility links
Civil War Soldiers Needed Bravery To Face The Foe, And The Food : The Salt Tooth-breaking crackers infested with bugs. Ramrod rolls cooked on gun parts. Fake coffee made of peanuts and chicory. At Gettysburg and elsewhere, the rations faced by soldiers on both sides of the Civil War would make most of us want to surrender in dismay. 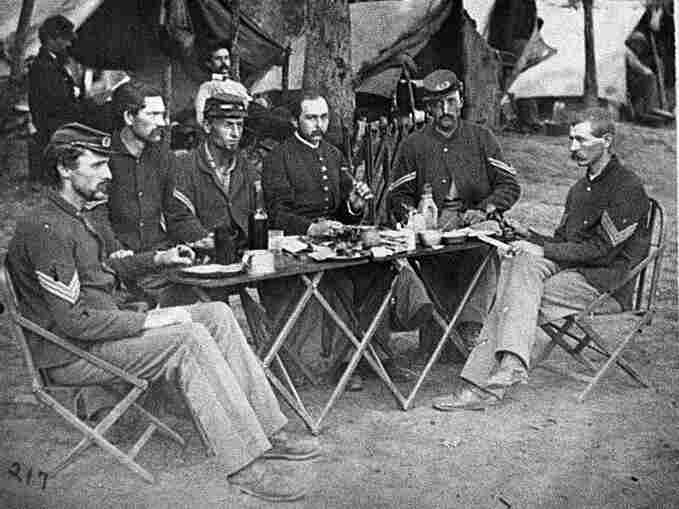 How did the food taste? These faces say it all. Photograph from the main eastern theater of war, Meade in Virginia, August-November 1863. Timothy H. O'Sullivan/Library of Congress hide caption 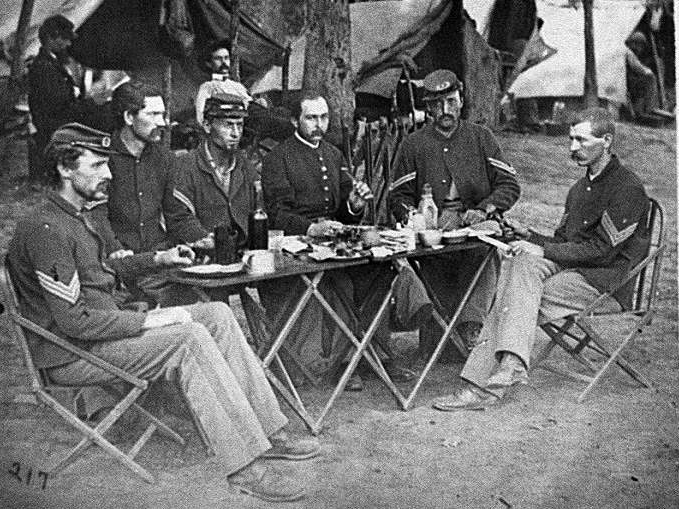 How did the food taste? These faces say it all. Photograph from the main eastern theater of war, Meade in Virginia, August-November 1863.

War is hell, Union Gen. William Tecumseh Sherman is famously said to have uttered.* And the food, he might as well have added, was pretty lousy, too.

As the nation marks the 150th anniversary of the Battle of Gettysburg — a turning point in the Civil War — it's worth remembering that the men who fought on that Pennsylvania field did so while surviving on food that would make most of us surrender in dismay.

Insects and other critters commonly made it into Union soldiers' meals in the form of hardtack — a stiff, flavorless cracker that could cost you a tooth if you bit it into it. (The biscuit was meant to be softened by dipping it in stew or coffee.) Along with salt pork or beef, hardtack — which the soldiers called "worm castles" or "teeth dullers" — was a staple of soldiers' rucksacks. Yum. 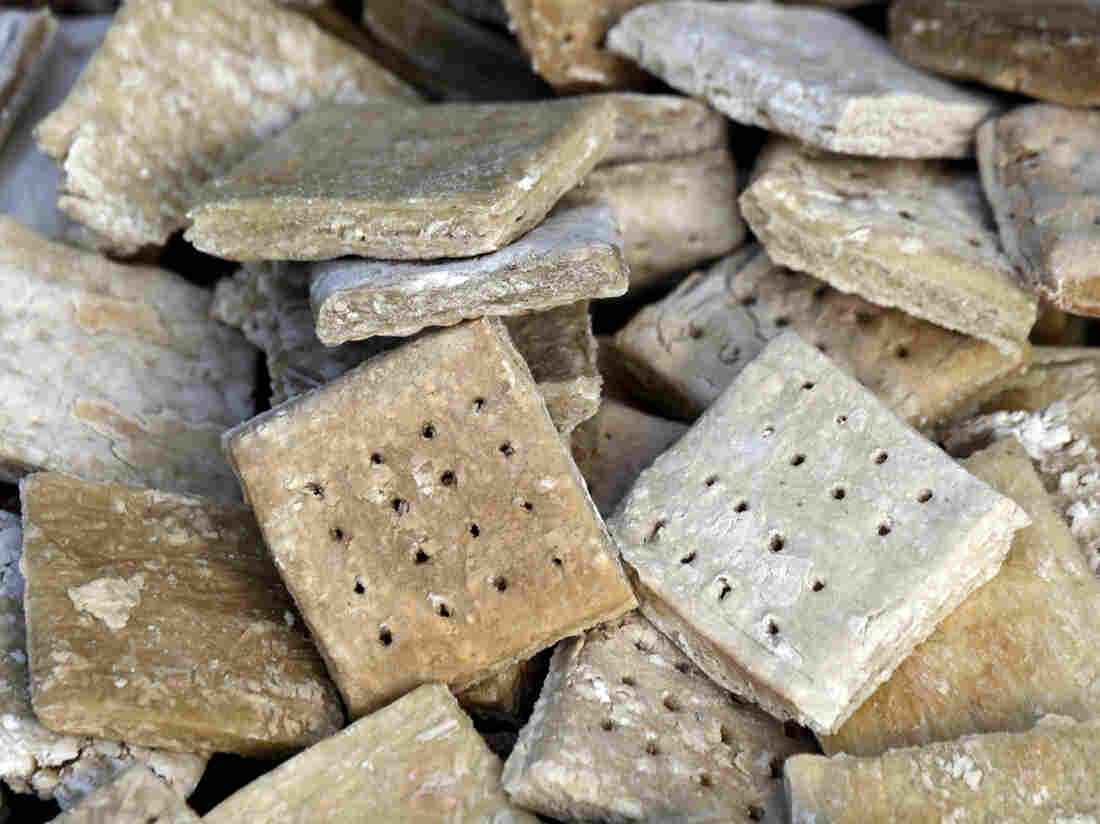 Hardtack was made to last — not to taste good. Here's a re-created ration at Bushey Farm in Gettysburg, Pa. Matt Rourke/AP hide caption 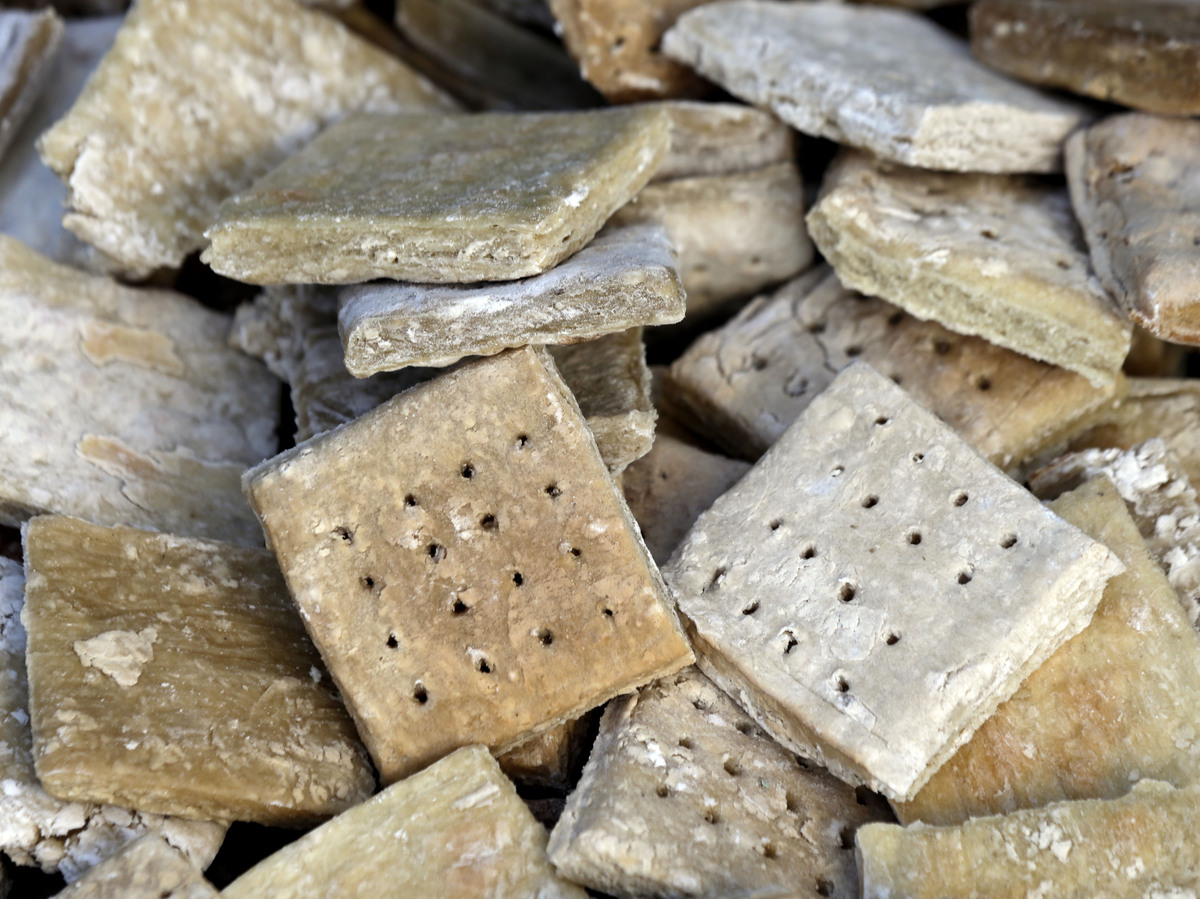 Hardtack was made to last — not to taste good. Here's a re-created ration at Bushey Farm in Gettysburg, Pa.

"They were," jokes Sandy Levins, who re-creates historic foods for museums, "the Spam of the era." (Or, perhaps, the Twinkies: A century and a half later, this bit of hardtack still looks intact — complete with embedded bug.)

The boys in Union blue also got dried navy beans and, occasionally, a "treat" of sorts: dehydrated potatoes, fruit and other items the soldiers jokingly called "desecrated" vegetables (perhaps because their flavor violated the laws of nature?). At least the North had coffee — though it was a brew "you probably wouldn't recognize in New York," as 16-year-old Union soldier Charles Nott wrote home. "Boiled in an open kettle, and about the color of a brownstone front, it was nevertheless ... the only warm thing we had." 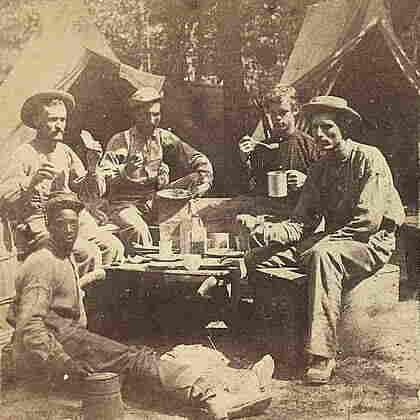 At Least They Had Real Coffee: Union soldiers eat and drink in front of tents. E. & H.T. Anthony (Firm)/Library of Congress hide caption 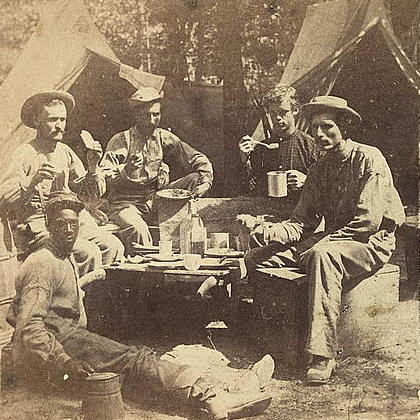 At Least They Had Real Coffee: Union soldiers eat and drink in front of tents.

Confederate soldiers weren't so lucky: Union blockades kept coffee, flour and other goods from reaching the South. Those jonesing for a cup of joe had to make do with substitutes brewed from peanuts, chicory, rye, peas, dried apples — pretty much anything they could get their hands on. 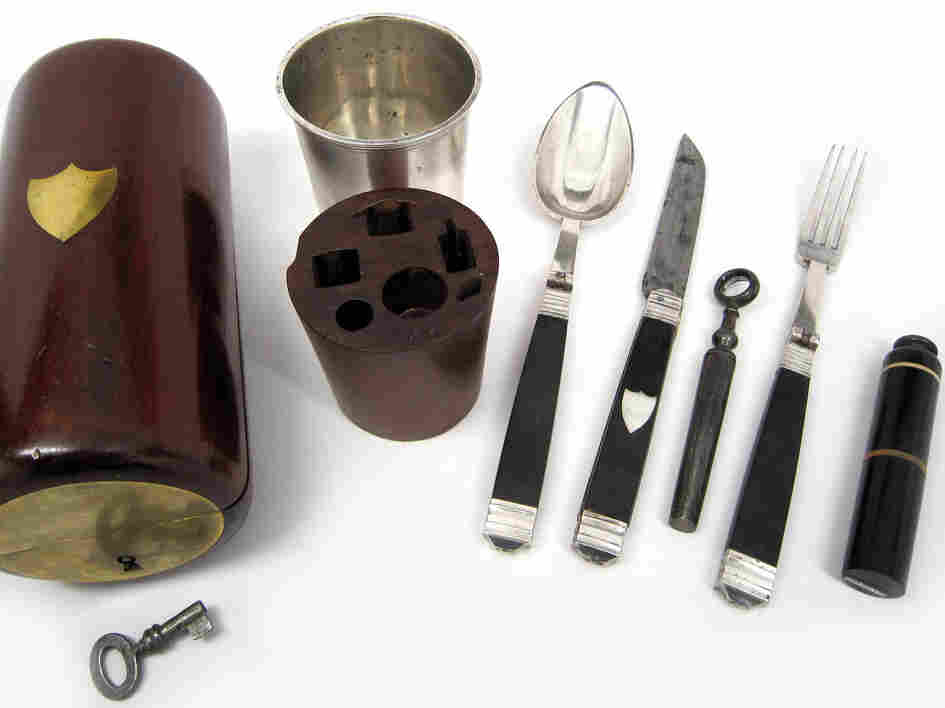 Dig In: This nonregulation Civil War mess kit features a fork, knife, spoon, corkscrew, salt and pepper shaker, and cup enclosed in a mahogany carrying case. The typical kit was much less fancy and looked more like this. Minnesota Historical Society/Flickr hide caption 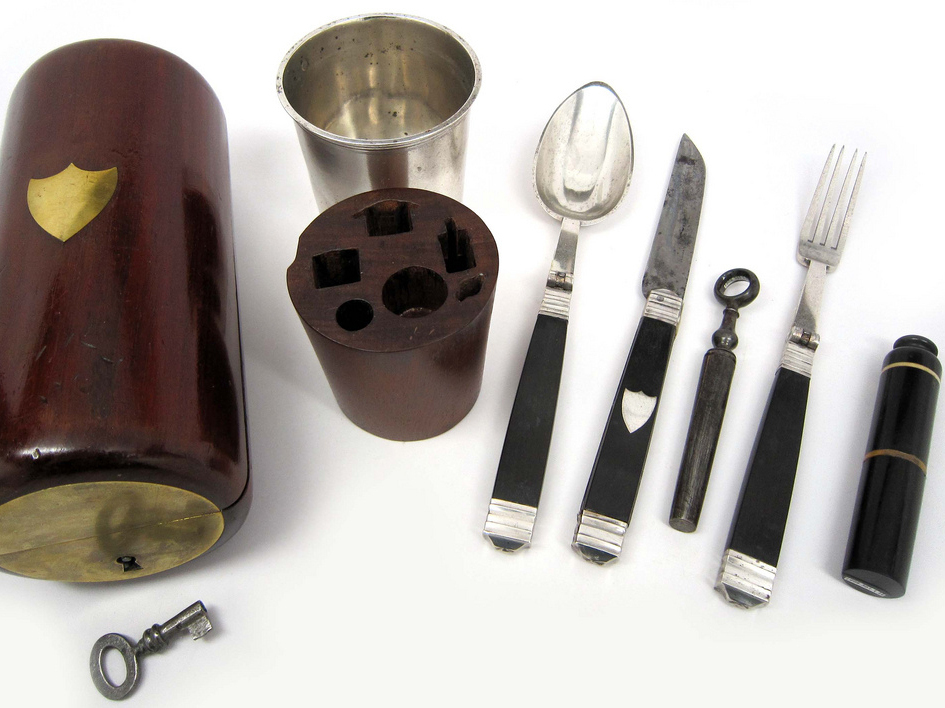 Dig In: This nonregulation Civil War mess kit features a fork, knife, spoon, corkscrew, salt and pepper shaker, and cup enclosed in a mahogany carrying case. The typical kit was much less fancy and looked more like this.

Cooking can be pretty tricky when you've got no pots or pans, so soldiers on the move on both sides had to get crafty. They would turn their flour or cornmeal rations into dough, coil it into a long rope, then wrap it around the ramrod of a musket (that's the rod used to "ram" the charge down old firearms). Cooked over an open fire, the resulting "ramrod" roll came out blackened but edible. Just barely.

As Scarlett O' Hara opined after sampling a piece on a dare from a Confederate soldier in Gone With The Wind, "How can they go on fighting if they have this stuff to eat?" 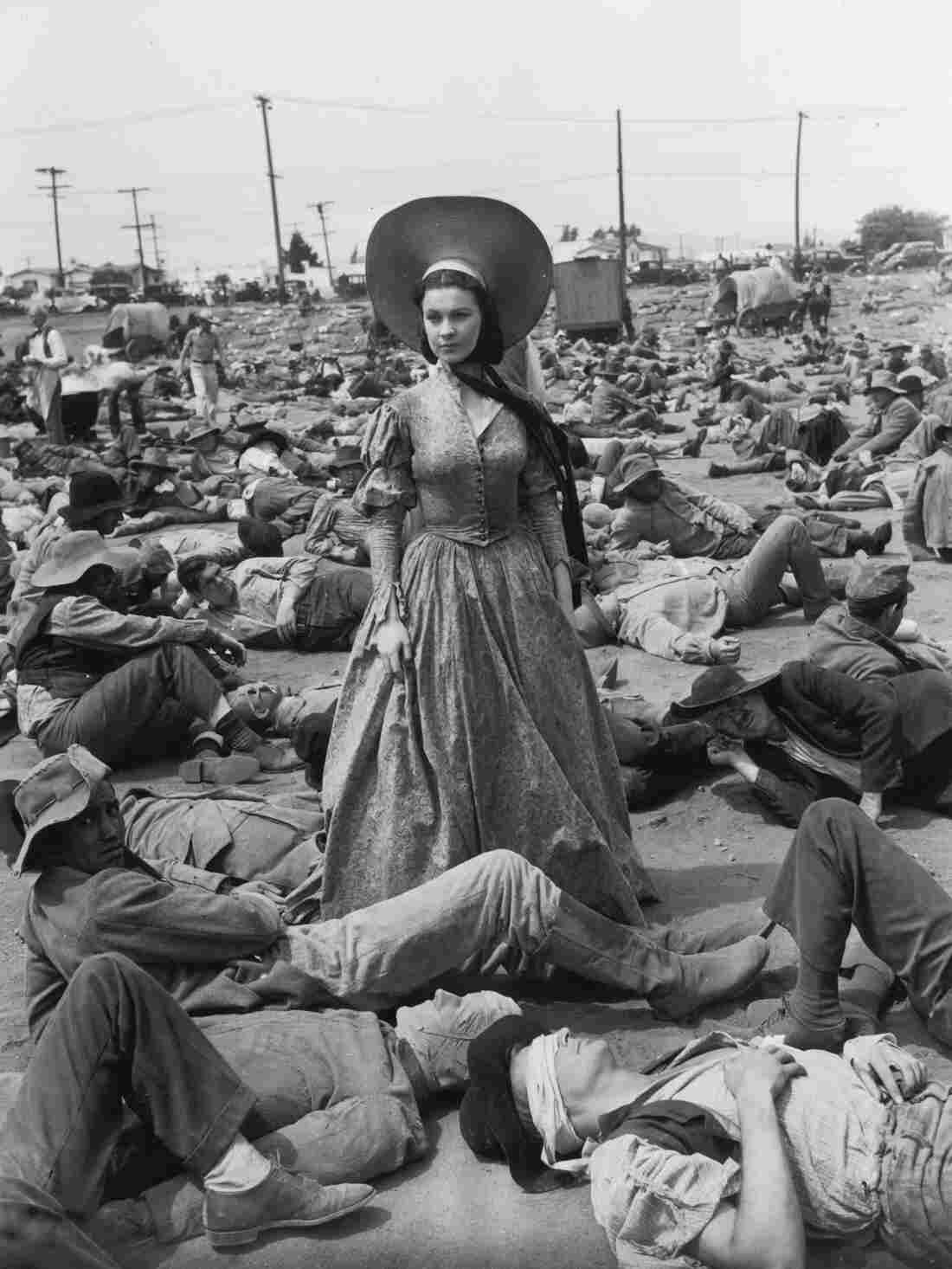 On The Set Of Gone With the Wind: If I have to lie, steal, cheat or kill, as God as my witness, I'll never eat ramrod rolls again! Fred Parish/Getty Images hide caption 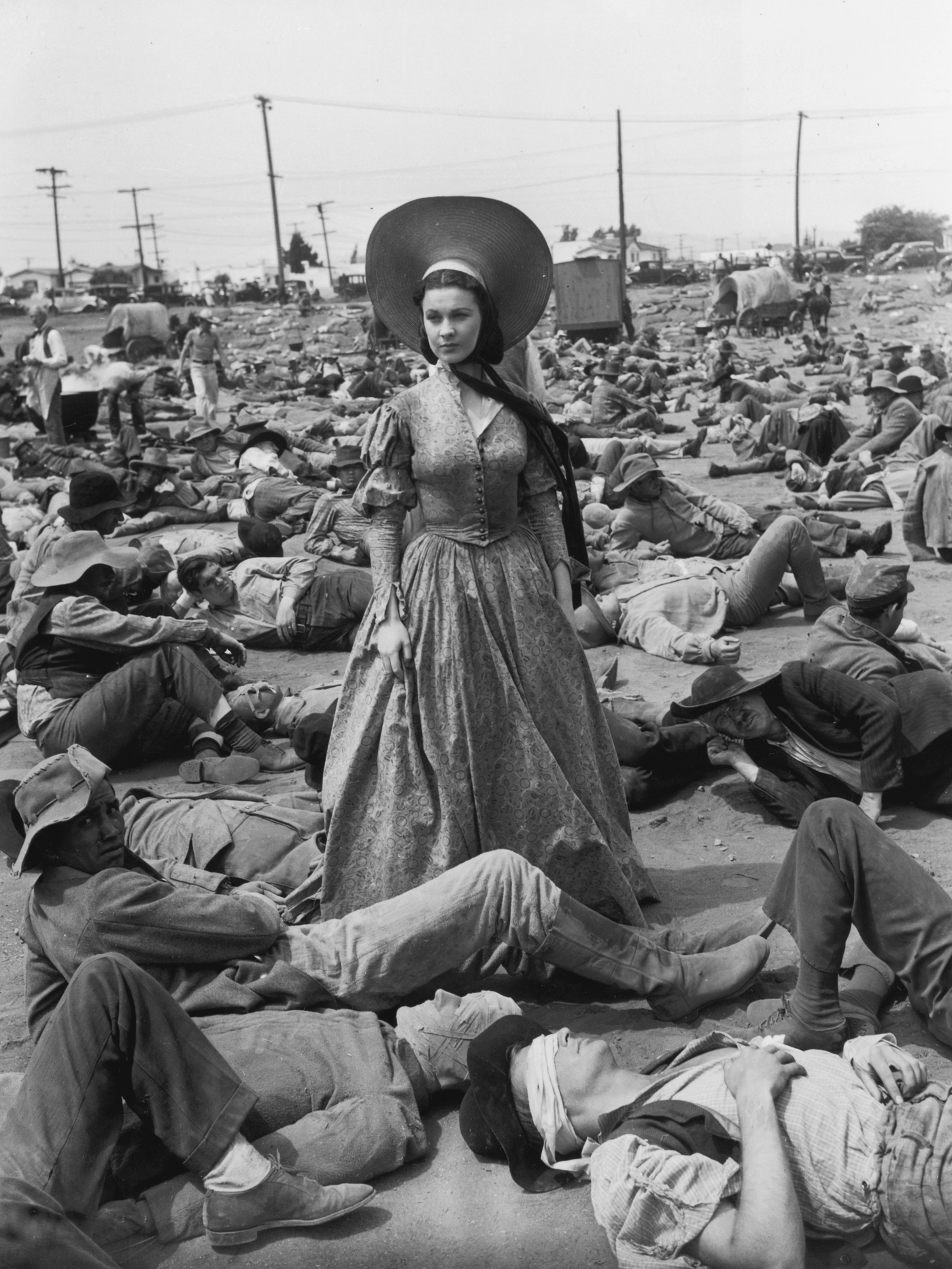 On The Set Of Gone With the Wind: If I have to lie, steal, cheat or kill, as God as my witness, I'll never eat ramrod rolls again!

Scarlett was right: Confederate soldiers got the short end of the stick throughout the war when it came to food. And that was a crucial factor that helped the North to victory, says food historian Andrew F. Smith, a faculty member at The New School and author of Starving The South.

"From the beginning to the end of the war, food played an important part in what happened at virtually every battle," Smith tells The Salt.

Food, he says, was even "significant to an extent at Gettysburg."

In early 1863, Smith explains, Robert E. Lee's Army of Northern Virginia was growing hungry, so Lee sent about a quarter of his men down to the southeastern part of the state to fetch food for the rest of the troops. But that split Lee's forces, delaying his march north against the Union. The full army wasn't reunited until the end of April 1863 — at which point they clashed with Union forces in a battle that saw Lee's forces suffer 13,000 casualties, including his right-hand man, Stonewall Jackson.

"If Lee had been at Gettysburg with ... more troops and had Stonewall Jackson," Smith says, "I think he could've won."

Instead, Lee lost as many as 28,000 men — dead, injured, captured, or missing — in three days of bloody battle, by some estimates. An additional 23,000 men were casualties on the Union side. Tending to the wounded at Gettysburg, nurse Cornelia Hancock wrote of trying to comfort the men with wine, lemonade, bread and preserves. "For they need it very much," she wrote, "they are so exhausted."

Update: Some of you have commented on the figures I listed for the dead at Gettysburg. Those numbers – 28,000 dead on the Confederate side, 23,000 on the Union side — came from this U.S. Army site listing statistics of Gettysburg "deaths." However, several other sources – including the Gettysburg Foundation – cite the same figures as casualties, which includes the wounded, missing or captured, as well as the dead. I've updated this post to use the term "casualties."

* Postscript: Smith tells me that's he never been able to find a primary source for Sherman's "war is hell" quote. "The closest I found," Smith writes, "was 'Madam, war is barbarity' (1865)."

If you want to try your hand at Civil War cooking, there are recipes for items like beef jerky and Confederate biscuits here, which Smith helped adapt from Civil War era cookbooks. Recipes for hardtack abound online, including this one from AmericanCivilWar.com.