Accessibility links
France Battles Scourge Of Ready-To-Eat Meals In Restaurants : The Salt French dining is world famous, but it has a dirty little secret: Many restaurants rely on microwavable, premade meals. A bill that's already cleared one big hurdle in the French National Assembly would force restaurants to label when their food is made in-house from scratch – and penalize those who lie about it. 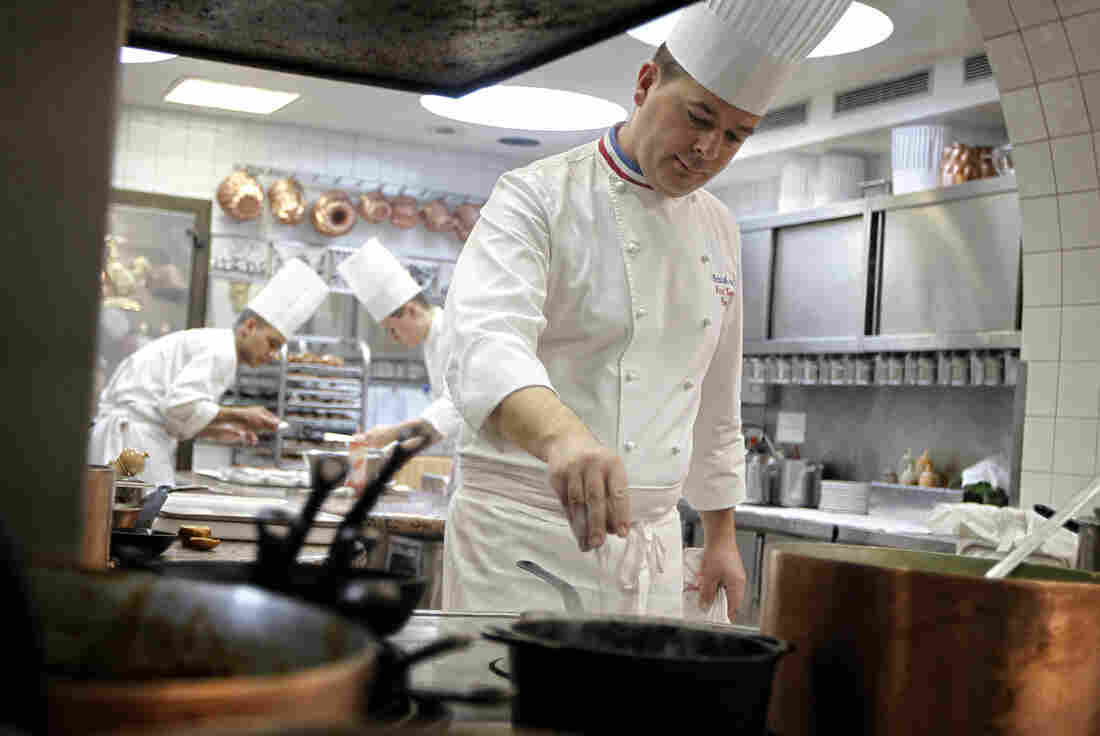 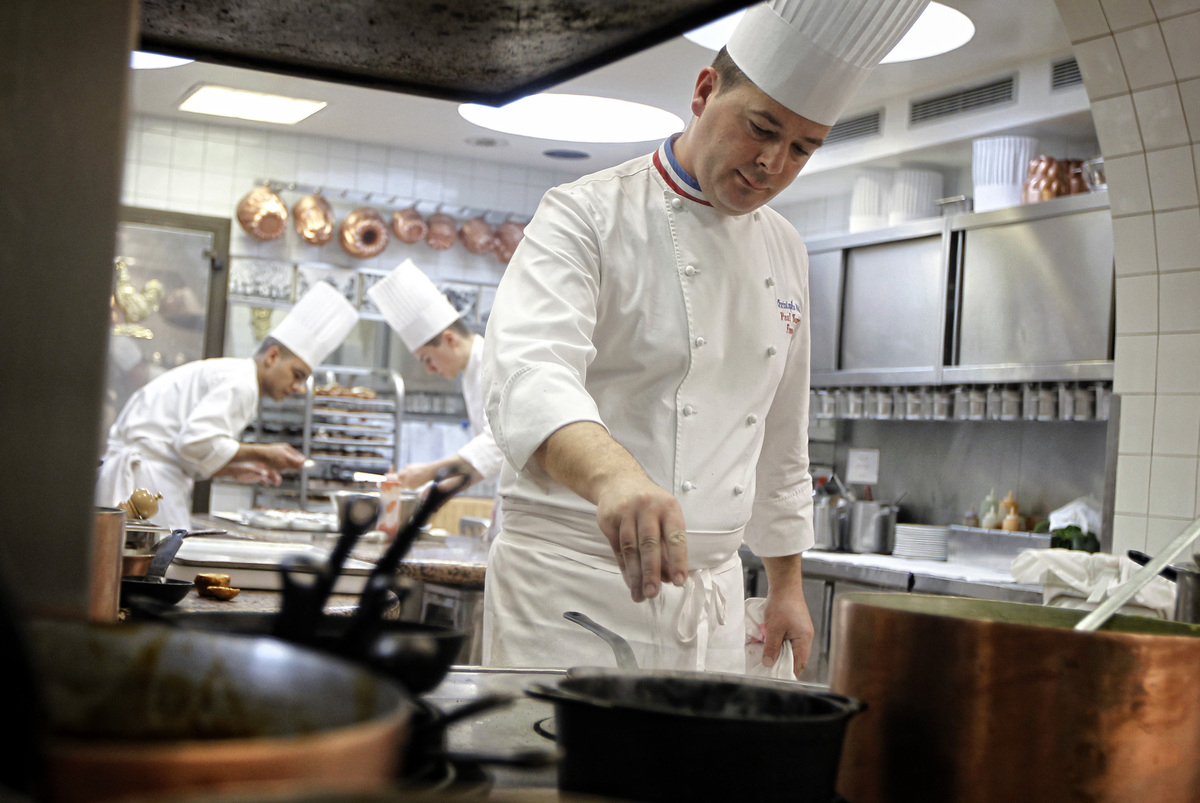 We're guessing microwavable, premade meals are not an issue in this kitchen, at the three-Michelin-star restaurant L'Auberge du Pont de Collonges near Lyon, France.

France's vaunted culinary culture has been taking it on the chin lately.

First came the news, which we told you about in April, that the majority of France's restaurants are now fast-food joints.

And now, another blow. In a recent survey of French restaurants, more than a third fessed up that they serve industrially prepared, and often frozen, food. Fast-food outlets, mind you, weren't even included in that poll, which was conducted by Synhorcat, a French restaurant trade group.

But fear not, foodies: The French National Assembly is taking action. After all, gastronomy is a cornerstone of French culture, and its restaurants are a prime tourist attraction. So France's lower Assembly has approved a bill that would force restaurants that make their food on site to use the label "fait-maison" – or homemade.

The bill still needs to pass the Upper Senate to become law. But if it goes through, any restaurant that boasts that "homemade" label but uses shortcuts — like buying pre-chopped onions — will be fined.

"Seventy percent of French restaurants rely on companies to deliver ready-made meals that only require the ding of a microwave," says Xavier Denamur, who owns five restaurants in Paris' Le Marais neighborhood.

Denamur tells The Salt that French restaurants have long had a dirty little secret: Many of them — from fast-food places to brasseries to high-end restaurants — use "ready-to-serve" meals made by industrial food manufacturers. (The website of one such company, Brake France, promotes several of these meals as "grandmother-style" recipes.) Often, Denamur and others contend, eateries will mix these premade meals with freshly prepared dishes.

Some of France's leading chefs — like Alain Ducasse, Joel Robuchon and others — are calling for the new labeling efforts to go further: They want to limit the use of the term "restaurant" to only those eating establishments that make their food in-house from scratch. Under that scenario, "restaurant" would become an "appellation" — a label that serves as a symbol of quality, similar to those given to particular wines and cheeses.

But UMIH, France's main association of restaurant owners, opposes this new "restaurant" label, arguing it will create confusion among the public and have "drastic consequences" for the industry. Instead, UMIH suggests a new category of "artisanal" restaurants for those making everything from scratch.

UMIH claims that it's virtually impossible for small-restaurant owners who do make everything by hand to compete economically with those who don't. Denamur counters that the new labels will level the playing field, so that only the best survive. Other restaurateurs maintain they've had to resort to labor-saving techniques to turn a profit on tight margins.

If the new "homemade" label rules do become law, interpreting them could be a minefield, says London-based catering and restaurant consultant David Read. For instance, does "homemade" allow restaurants to use deboned fish or premade butter? What about frozen vegetables?

"Sometimes fresh vegetables don't taste as good as vegetables that have been picked exactly when ripe and frozen properly," he notes. "I love fresh vegetables, but you can't run a chain of restaurants like that."

Restaurants, he notes, will sometimes outsource the "extras" they lack the resources or expertise to make. "Often, a bakery can provide much better bread and pastries than a restaurant can make themselves," he says. "It doesn't make it a bad restaurant."

Label-proponent Denamur agrees it's important to draw the line.

"Anything that has not been altered by industrial means is acceptable," he says. "A fish freshly filleted has not suffered alteration apart from being cut. Equally, a restaurateur cannot be expected to buy a whole beef to serve a steak."

For Denamur, the main issue is transparency for the consumer, ensuring diners know what they're getting. The country's gastronomic reputation, he says, "enables unscrupulous restaurateurs to sell whatever they want. Tourists are probably the first victims."