Accessibility links
As Biotech Seed Falters, Insecticide Use Surges In Corn Belt : The Salt Across the corn belt, farmers are pulling out all the stops in their war on the corn rootworm. They're returning to chemical pesticides, because the weapons of biotechnology — inserted genes that are supposed to kill the rootworm — aren't working so well anymore. 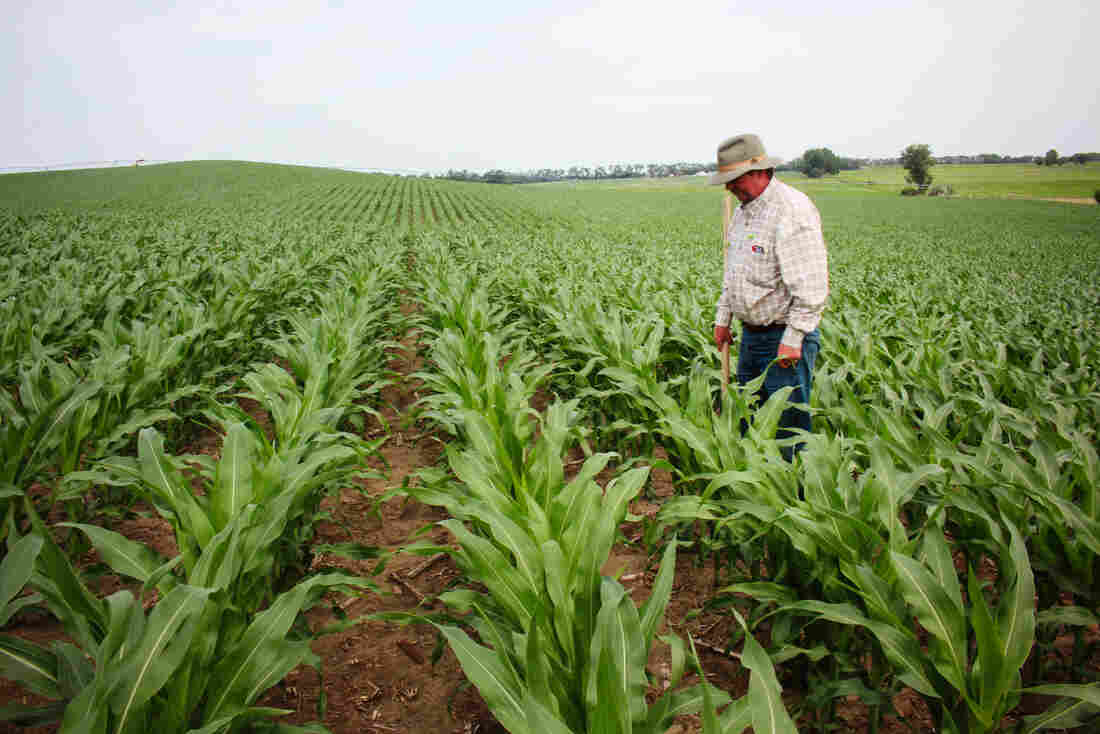 Across the Midwestern corn belt, a familiar battle has resumed, hidden in the soil. On one side are tiny, white larvae of the corn rootworm. On the other side are farmers and the insect-killing arsenal of modern agriculture.

We've reported on earlier phases of this battle: The discovery of rootworms resistant to one type of genetically engineered corn, and an appeal from scientists for the government to limit the use of this new corn to preserve the effectiveness of its protection against rootworm.

It appears that farmers have gotten part of the message: Biotechnology alone will not solve their rootworm problems. But instead of shifting away from those corn hybrids, or from corn altogether, many are doubling down on insect-fighting technology, deploying more chemical pesticides than before. Companies like Syngenta or AMVAC Chemical that sell soil insecticides for use in corn fields are reporting huge increases in sales: 50 or even 100 percent over the past two years.

This is a return to the old days, before biotech seeds came along, when farmers relied heavily on pesticides. For Dan Steiner, an independent crop consultant in northeastern Nebraska, it brings back bad memories. "We used to get sick [from the chemicals]," he says. "Because we'd always dig [in the soil] to see how the corn's coming along. We didn't wear the gloves and everything, and we'd kind of puke in the middle of the day. Well, I think we were low-dosing poison on ourselves!"

For a while, biotechnology came to his rescue. Biotech companies such as Monsanto spent many millions of dollars creating and inserting genes that would make corn plants poisonous to the corn rootworm but harmless to other creatures.

The first corn hybrids containing such a gene went on sale in 2003. They were hugely popular, especially in places like northeastern Nebraska, where the rootworm has been a major problem. Sales of soil insecticides fell. "Ever since then, I'm like, hey, we feel good every spring!" says Steiner.

But all along, scientists wondered how long the good times would last. Some argued that these genes — a gift of nature — were being misused. (For a longer explanation, read my post from two years ago.)

Those inserted genes, derived from genes in a strain of the bacterial Bacillus thuringiensis, worked well for a while. In fact, the Bt genes remain a rock-solid defense against one pest, the European corn borer.

In parts of Illinois, Iowa, Minnesota and Nebraska, though, farmers are running into increasing problems with corn rootworms.

"You never really know for sure, until that big rain event with the strong wind, and then the next morning the phone starts ringing [and people ask]: 'What's going on out there?' " says Steiner.

Entire hillsides of corn, with no support from their eaten-away roots, may be blown flat.

Monsanto has downplayed such reports, blaming extraordinary circumstances. But in a half-dozen universities around the Midwest, scientists are now trying to figure out whether, in fact, the Bt genes have lost their power. 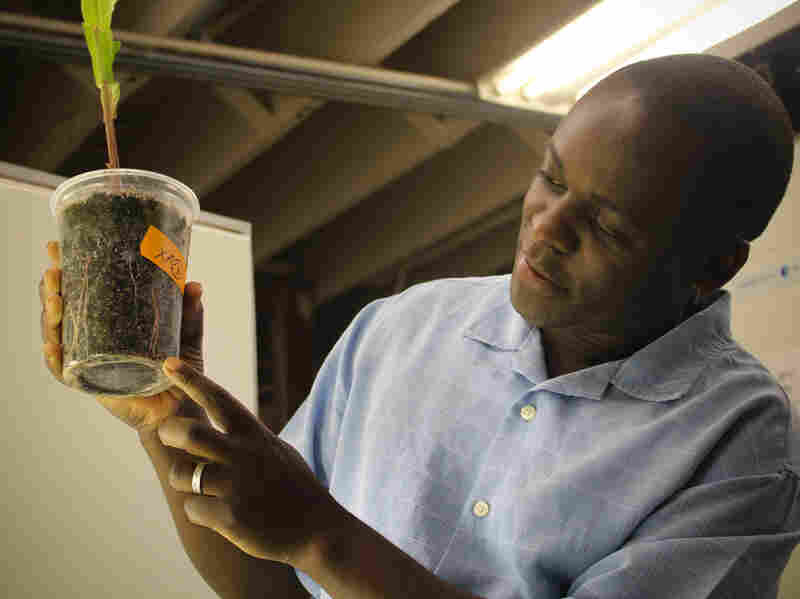 David Wangila points to a tiny rootworm larva in the soil surrounding the roots of a corn plant in his laboratory. Dan Charles/NPR hide caption 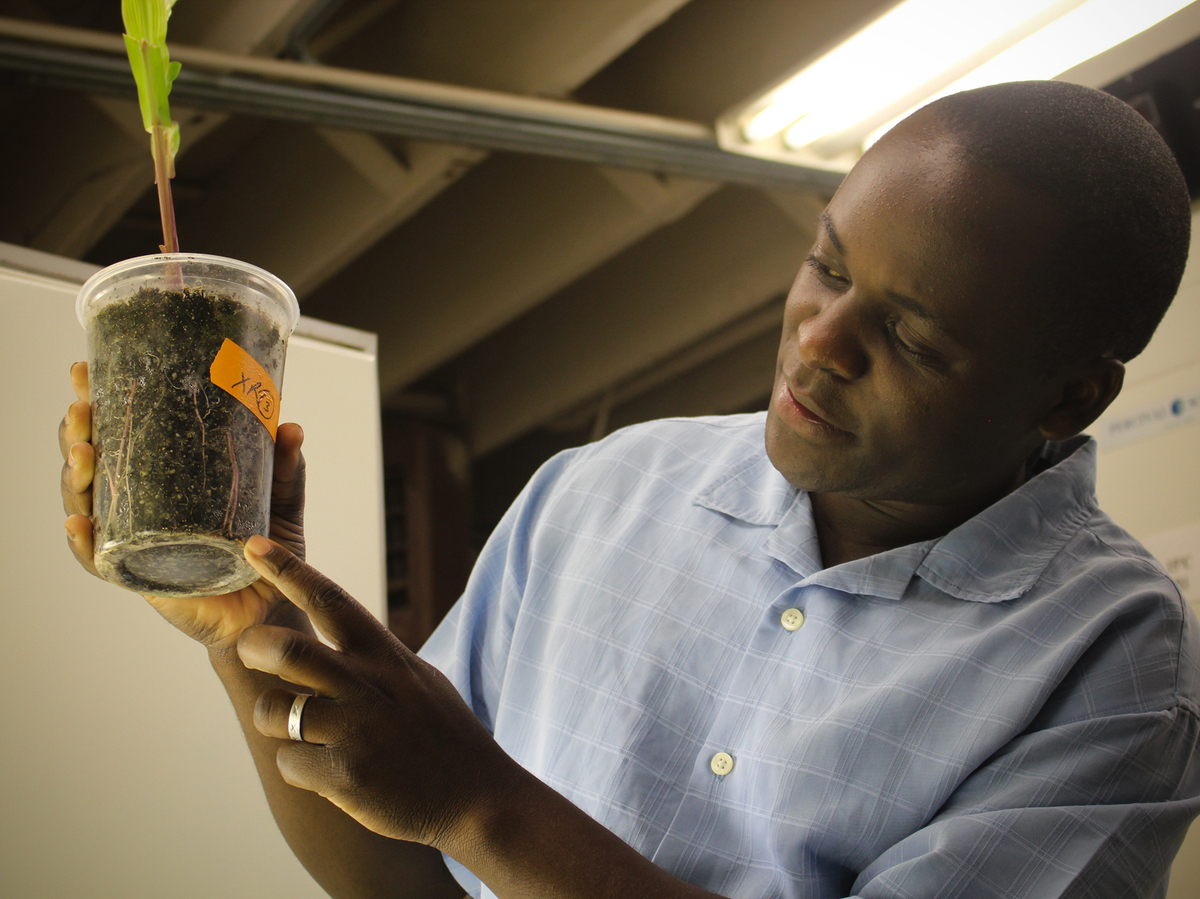 David Wangila points to a tiny rootworm larva in the soil surrounding the roots of a corn plant in his laboratory.

At the University of Nebraska, entomologist Lance Meinke is turning colonies of rootworms loose on potted corn plants that contain different versions of the anti-rootworm gene, to see how well they survive.

The larvae get to feed on the corn roots for about two weeks. The soil from each pot then is dumped into a kind of steel container. If the larvae are still alive, a bright light will drive them into little glass jars filled with alcohol. "They try to escape from the heat," says David Wangila, a graduate student who is managing this experiment.

If the rootworm-fighting genes in the corn are working well, no larvae should emerge.

But some have. Wangila points to one of the little glass jars. Inside, there are three nice plump corn rootworm larvae.

This is not good. Those insects, originally collected from a cornfield in Nebraska, were feeding on corn that contained the first rootworm-fighting gene that Monsanto introduced ten years ago. Technically, it's known as the Cry 3Bb gene.

Meinke and Wangila will compare the survival rate of these rootworms with others that have never been exposed to Bt. They're looking for signs that rootworms in the corn fields of Nebraska have evolved resistance to genetically engineered crops. 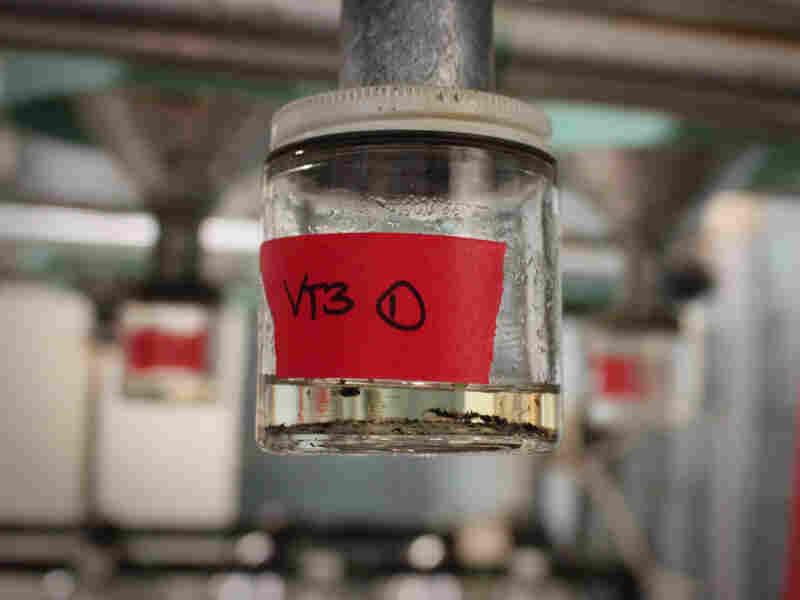 The corn rootworm larvae in this glass jar survived on the roots of genetically engineered corn plants that were supposed to kill these insects. Dan Charles/NPR hide caption 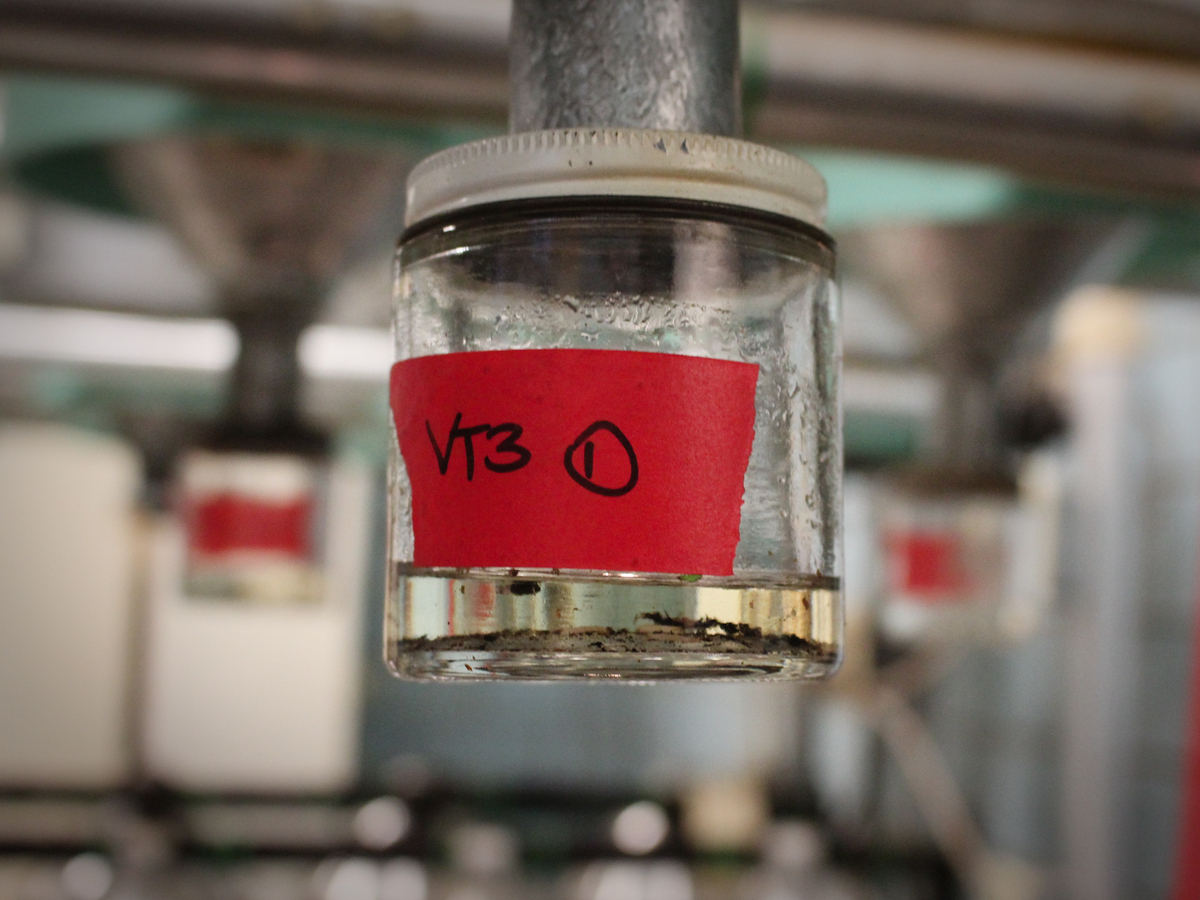 The corn rootworm larvae in this glass jar survived on the roots of genetically engineered corn plants that were supposed to kill these insects.

An identical experiment in Iowa, carried out more than a year ago, found corn rootworms resistant to the Cry 3Bb gene.

Nobody knows how widely those insects have spread, but farmers aren't waiting to find out. Some are switching to other versions of biotech corn, containing anti-rootworm genes that do still work. Others are going back to pesticides.

Steiner, the Nebraska crop consultant, usually argues for another strategy: Starve the rootworms, he tells his clients. Just switch that field to another crop. "One rotation can do a lot of good," he says. "Go to beans, wheat, oats. It's the No. 1 right thing to do."

Insect experts say it's also likely to work better in the long run.

Meinke, who's been studying the corn rootworm for decades, tells farmers that if they plant just corn, year after year, rootworms are likely to overwhelm any weapon someday.

The problem, Meinke says, is that farmers are thinking about the money they can make today. "I think economics are driving everything," he says. "Corn prices have been so high the last three years, everybody is trying to protect every kernel. People are just really going for it right now, to be as profitable as they can."

As a result, they may just keep growing corn, fighting rootworms with insecticides — and there's a possibility that those chemicals will eventually stop working, too.