Accessibility links
What Is Farm Runoff Doing To The Water? Scientists Wade In : The Salt Across the Midwest this summer, scientists are wading into 100 streams to collect water samples and check cages for fish eggs. It's part of a large study to understand how pesticides and agricultural chemicals from farms are affecting the nation's streams. 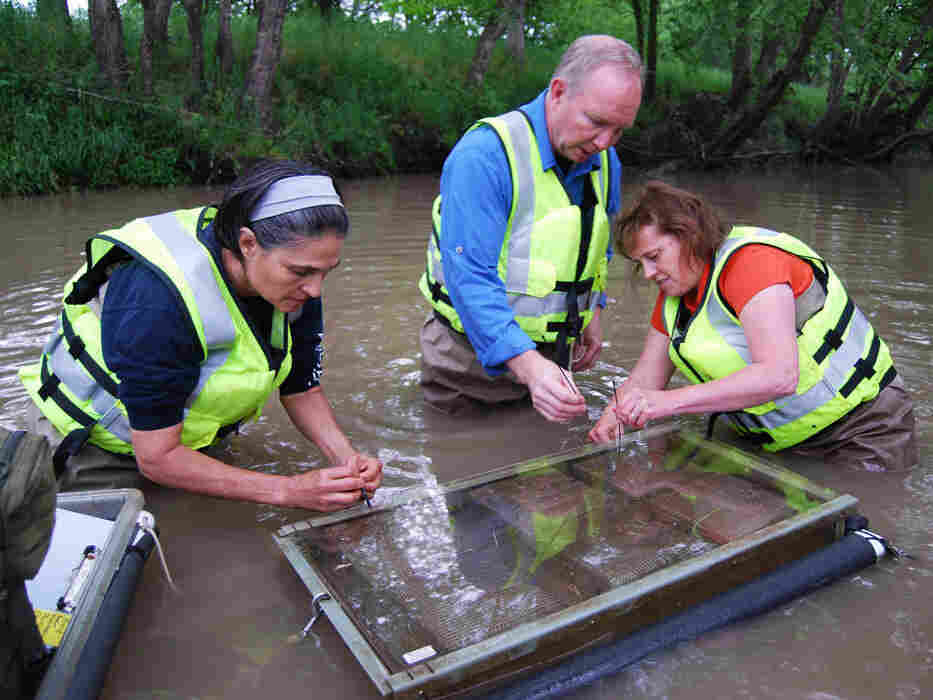 Scientists with the U.S. Geological Survey sample water in Goodwater Creek, Mo., for pesticides and other chemicals that may have run off from the surrounding land. Abbie Fentress Swanson/Harvest Public Media hide caption

America's hugely productive food system is one of its success stories. The nation will export a projected $139.5 billion in agricultural products this fiscal year alone. It's an industry that supports "more than 1 million jobs," according to Agriculture Secretary Tom Vilsack.

But all that productivity has taken a toll on the environment, especially rivers and lakes: Agriculture is the nation's leading cause of impaired water quality, according to the U.S. Environmental Protection Agency.

Scientists want to get a better sense of how all that agricultural runoff is affecting water quality. So this summer, three dozen scientists from the EPA and U.S. Geological Survey are wading into some 100 streams, from Ohio to Nebraska. Their mission: Test for hundreds of pesticides and nutrients used in farming, and check for possible effects on what's living in the streams.

This is the first time scientists have tested for so many chemicals in a whole region's waters or considered the impact of agricultural runoff on fish, frogs, bugs and algae at this scale. The study is costing the USGS $6 million and the EPA $570,000.

"These aren't the kinds of studies that are done routinely, because they are pretty difficult to do," says USGS biologist Diana Papoulias. "But we know that some of these chemicals that we're finding in the runoff from the ag fields can affect [aquatic] reproduction and egg production. Whether they are at the concentrations that can do that or not — we don't know yet."

Some tests being conducted can measure even the tiniest amounts of mercury, livestock hormones and pesticides, including the weed killer glyphosate — better known by its trade name, Roundup.

Farm runoff has become an even more pressing concern this year because of the Midwest's extremely wet spring. In between the frequent storms, farmers had only brief stretches of weather dry enough to apply pesticides and fertilizers.

"Whether we want to blame it on climate change or just variability in the weather conditions, anytime you have these heavier rainfalls during the spring, after a drier period when you could have got something put in the field, you're going to see, in most cases, a large amount of runoff," says Bob Broz, a water quality specialist with the University of Missouri Extension.

"It's been happening for years," he says. "The problem is now we seem to be seeing more of these more intense rainfalls. And that, in turn, creates a huge amount of nutrient loss."

Nutrients like nitrogen and phosphorus are essential for growing crops, but they can also trigger algal growth in rivers, lakes and bays.

Because last year's drought prevented some parched fields from absorbing fertilizers, an extra load of nutrients is flowing into Midwest waterways and will end up in the Gulf of Mexico. Once there, the chemicals can threaten aquatic life, says Bob Lerch, a USDA soil scientist.

"There's the direct impact on the aquatic ecosystem," Lerch says. "And then there's the downstream impacts on say, drinking water, or a reservoir, or a recreational [body of water]."

Agricultural runoff flows into the lakes and rivers that hundreds of towns draw their water from. For example, herbicide runoff from a farm in Centralia, Mo., might end up in Goodwater Creek, which empties into the Salt River, which then flows into Mark Twain Lake. That lake provides drinking water for 70,000 residents. Water treatment plants spend millions on chemicals to clean up that surface water.

In northeast Missouri, for example, the Clarence Cannon Wholesale Water Commission treats 1.5 billion gallons of water each year. On a walk through the plant, Mark McNally, the commission's general manager, points out a massive, 900-pound bag of powdered activated carbon being funneled into untreated water.

The powder is used to remove atrazine, a herbicide widely applied to cornfields in the spring. The chemical alone costs roughly $130,000 a year, McNally says. The plant passes that bill on to customers.

"Aunt Agnes, you know, on Third Street, has to pay more for her water because we have to recoup our money," McNally says. "I mean, we're not in the business to make money. But we can't go broke."

"Our concern, obviously, is that once you shake customers' faith in the safety of tap water, you turn them to other sources like bottled water, which is ... certainly a competitor," Stowe says. "It changes our business model and puts us at risk in the long term as a viable utility."

Scientists say they'll have results from their Midwest stream study after the fieldwork is completed in August. Over the next several years, the U.S. Geological Survey plans to replicate the study in other regions.

Abbie Fentress Swanson is a reporter for Harvest Public Media, a public radio reporting collaboration that focuses on agriculture and food production.