Accessibility links
The Science Of Twinkies: How Do They Last So Darned Long? : The Salt When Twinkies hit the stores again on July 15, their shelf life will be nearly twice as long as it used to be: 45 days. (We were surprised it wasn't longer.) There's a whole lot of food science employed to help the creme-filled cake defy the laws of baked-good longevity. 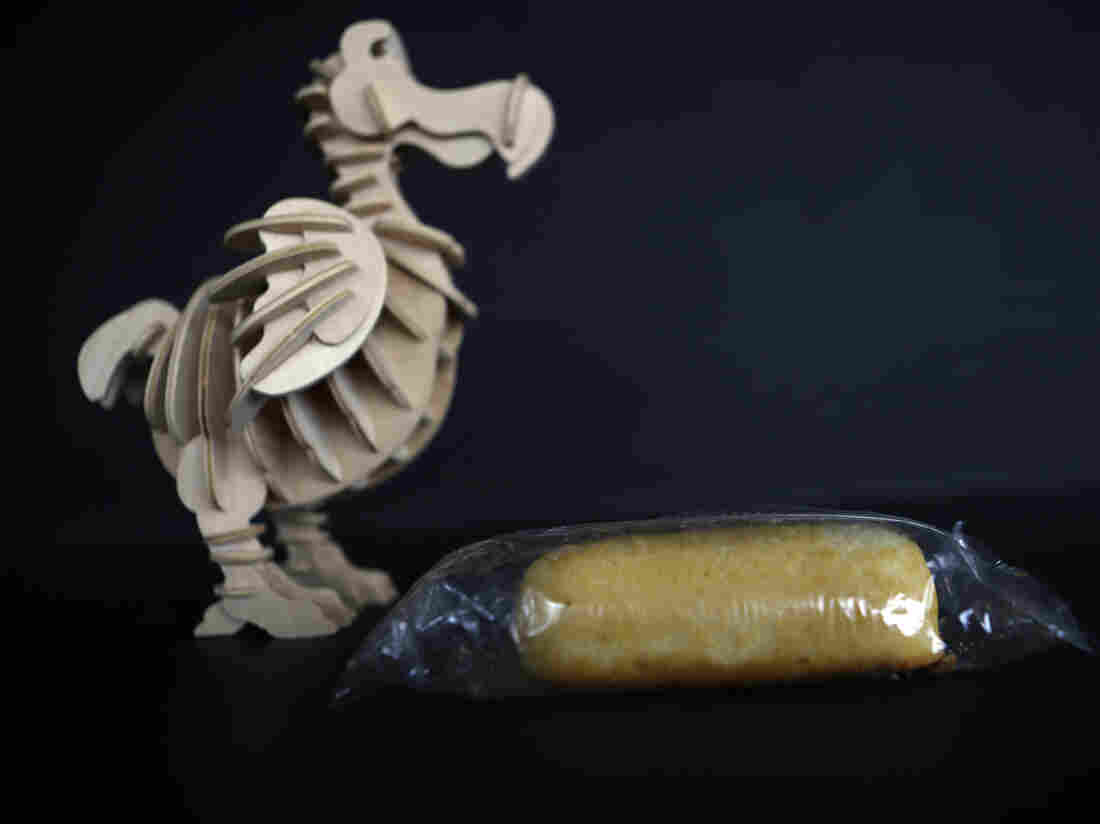 Unlike the dodo that sits next to it on an NPR Science Desk shelf, this year-and-a-half-old Twinkie is still around — but that doesn't mean you want to eat it. Heather Rousseau /NPR hide caption 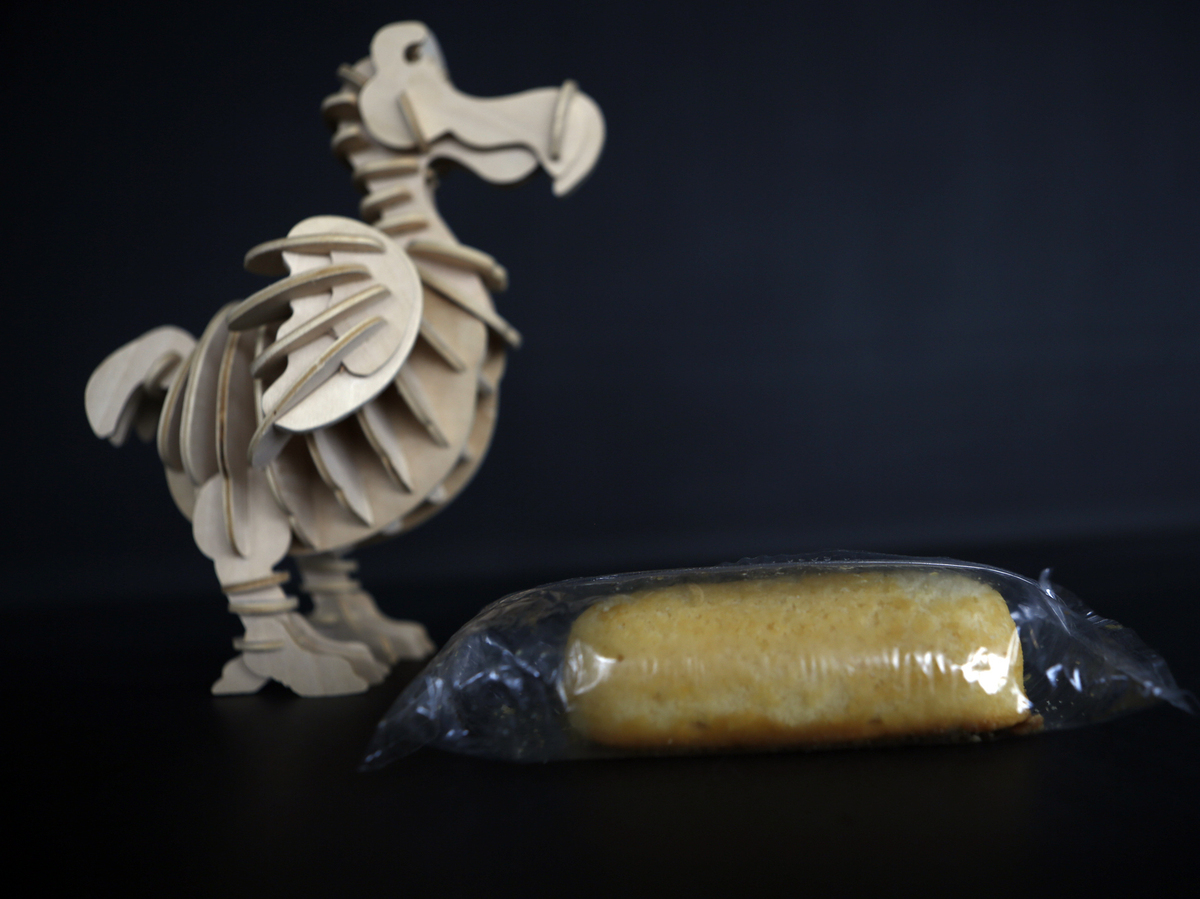 Unlike the dodo that sits next to it on an NPR Science Desk shelf, this year-and-a-half-old Twinkie is still around — but that doesn't mean you want to eat it.

We have to confess: When we heard that Twinkies will have nearly double the shelf life, 45 days, when they return to stores next week, our first reaction was — days? Not years?

Urban legend has long deemed Twinkies the cockroaches of the snack food world, a treat that can survive for decades, what humanity would have left to eat come the apocalypse. The true shelf life — which used to be 26 days — seems somewhat less impressive by comparison.

While the Twinkie is indeed a highly processed food — its three dozen or so ingredients include polysorbate 60, sodium stearoyl lactylate and others that could only come from a lab — it isn't any more so than thousands of other food products out there.

"It is absolutely typical of all processed foods," says Steve Ettlinger, who spent five years tracing the origins of ingredients in many processed foods for his book, Twinkie, Deconstructed.

"Perhaps disappointing to foodies, it's mostly flour and sugar," he tells The Salt.

So why does the Twinkie persist in the popular imagination as a paragon of delicious, unnatural food creations? Perhaps it is the way the snacks seem to override our senses. Unwrapped from their plastic packaging, these sponge cakes appear impossibly soft, their filling so creamy — not rancid, as logic tells us that any milk product left out for days must surely be.

Indeed, most of the items on Twinkies' long list of ingredients go into pulling off that hat trick. Normally, you need butter, milk and eggs to give cakes their moisture and tenderness. 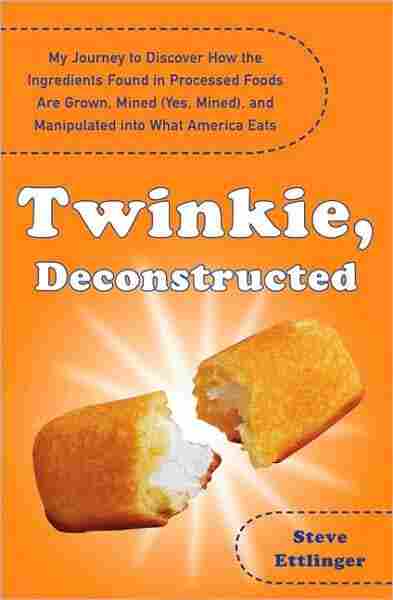 My Journey to Discover How the Ingredients Found in Processed Foods Are Grown, Mined (Yes, Mined), and Manipulated into What into What America Eats

Title
Twinkie, Deconstructed
Subtitle
My Journey to Discover How the Ingredients Found in Processed Foods Are Grown, Mined (Yes, Mined), and Manipulated into What into What America Eats
Author
Steve Ettlinger

But butter, milk and eggs spoil, so Twinkies needed a way to defy the laws of baked-good longevity. That job is filled by ingredients like monoglycerides and diglycerides, emulsifiers — also found in real milk — that love to bind with oil, and sodium stearoyl lactylate, which likes to bind with water, Ettlinger says.

The butter flavor comes from diacetyl, the same compound food scientists use in microwave popcorn and "buttery" chardonnays.

Eggs get a culinary understudy: polysorbate 60, an emulsifier derived from oil palm trees, corn syrup and ethylene oxide (which, Ettlinger says, is "derived from an oil well"). With polysorbate 60, he says, "you can get this wonderful goo that resembles egg yolk, only more powerful." There is the teensiest bit of real egg in Twinkies — about 1/500th of an egg in each cake, by Ettlinger's calculations. "I could never fathom why," he says.

Interestingly, though all these ingredients help extend the Twinkies' shelf life, the only proper "preservative" used is sorbic acid, he says.

So yes, there's a lot of food science packed into the yellow baked snack, though the exact proportions of the recipe remain top secret. (Ettlinger says he was once jokingly told by a Twinkie bakery in Maine that "if I knew the actual recipe for the creme, they would have to kill me.")

And though we're dying to know just what changes Hostess Brands LLC has made to keep Twinkies "fresh" nearly twice as long — from 26 days to 45 days — when they return to shelves on July 15, that, too, is likely to remain a mystery. (A representative for Hostess, which is under new ownership, told the Associated Press that the longer-lasting Twinkies were actually introduced by the old company shortly before it was liquidated.)

Of course, we've all heard of people who've kept their Twinkies around for much longer — including a Maine school that's held on to one snack cake for nearly 40 years, part of a very long-running science experiment. (That Twinkie hasn't crumbled yet, but in photos, it appears a ghastly ash gray.)

Heck, at NPR's Science Desk, we even started our own experiment a year and a half ago, after hearing of Hostess' financial woes. Our findings? So far, the subject shows no signs of disintegrating — or of still being edible: It's now hard as a rock.