Accessibility links
Taste Of Grandma's Kitchen: We Hack An Old Ketchup Recipe : The Salt Jim Ledvinka grew up outside of Chicago watching his grandmother make ketchup from scratch once a year. As a kid, he hated the stuff. As a man — and now a grandfather — he became desperate to re-create it. That's where All Things Considered's Found Recipes project comes in. 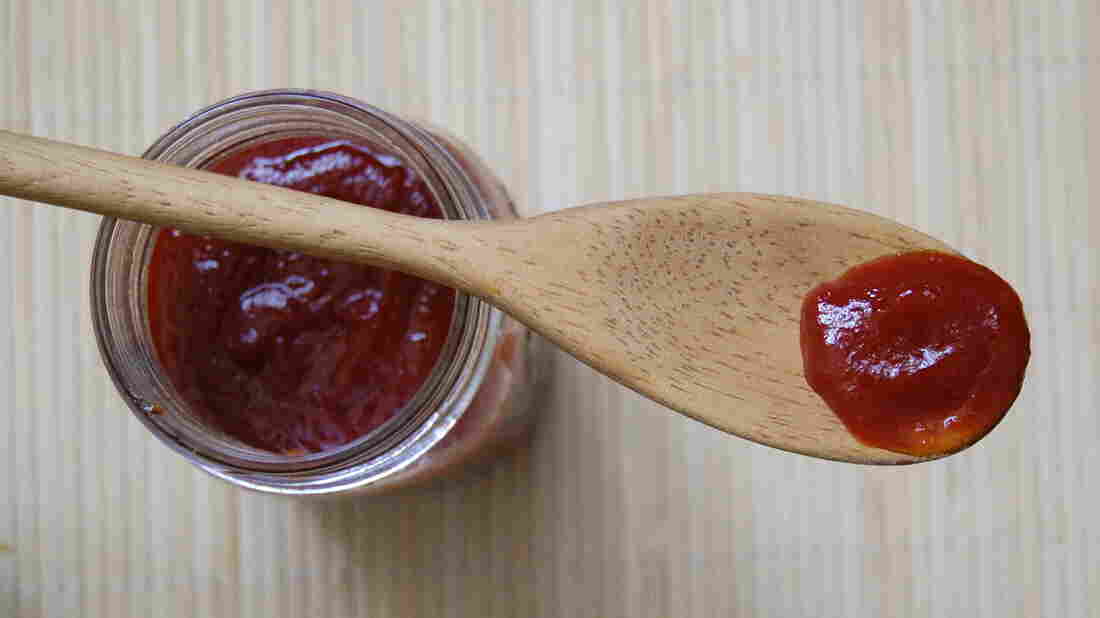 Editor's Note: This post is part of All Things Considered's Found Recipes project.

Although Heinz may dominate the ketchup scene, 100 years ago it wasn't uncommon to make your own at home. So why bother doing so now, when you can just buy the bottles off the shelf? At least one man, Jim Ledvinka, was motivated by nostalgia.

"Oh, yes — we remember my grandmother making ketchup. And it was quite a sight to behold," Ledvinka says.

Ledvinka now lives in Athens, Ga., but he grew up outside of Chicago with his younger sister Joanne in the 1940s and '50s. Every year their grandmother Antoinette Ledvinka would commandeer the kitchen for a marathon, no-nonsense ketchup-making session that lasted several days.

"I remember the huge pot of ketchup simmering on the stove," Joanne Ledvinka says. "The coloring was a little bit different; it was more of a brown, not a red."

The color wasn't the only thing that made grandma's homemade ketchup "special."

Have you been longing to recreate a food from your past, but don't have the recipe? Send your "Lost Recipe" story to All Things Considered here and put "Help With A Lost Recipe" in the subject line.

Unraveling The Mystery Of A Grandmother's Lost Ravioli Recipe

In A Family's Lost Cookie, Lots Of Love, And Molasses

"We hated it," Jim says. Joanne also was not a fan. "That ketchup did not come anywhere near the meatloaf," she says.

Jim says his grandma's version didn't taste nice and sweet. It was thin, a little runny, and it had a strong taste that was both spicy and vinegary — at least, that was their impression as children. But when Jim grew up a little bit, he had a very different reaction.

"Mother opened a jar of my grandmother's ketchup. I tried it, and I said, 'This is great! [Was I] crazy or something?' It was sort of like, all of a sudden, a revelation that comes when you have adult taste buds," he says.

Unfortunately, his appreciation came too late. It was Grandma Ledvinka's last batch of ketchup — canned in 1958, shortly before her death.

Jim Ledvinka is now himself a grandfather. Thinking about his grumpy grandma — and her spicy ketchup — he wrote to NPR's Found Recipes project for help re-creating the ketchup of his memories. We connected him with Kaela Porter, who writes the Local Kitchen food blog.

She notes that ketchup is technically a fruit butter. The name "butter" comes from the fact that is spreadable, like butter.

"I have made dozens and dozens of fruit butters, and they're simple recipes. You take some fruit, and add some sugar, and cook it way, way down," she says.

Porter says the recipe for ketchup hasn't changed in a long time; all versions use the same basics of tomatoes, vinegar, sugar and some spices. But it's the spices that can vary the most.

After chatting back and forth with Porter over email, the first big break in Ledvinka's "ketchup quest" came when she asked him a very basic question: Did his grandmother have any cookbooks that she used? In a flash, it came to him — The Settlement Cook Book (The Way to a Man's Heart).

He then bought several pounds of ripe, beefsteak tomatoes, cooked them down to a thickened sauce, and did experiments with various combinations of spices. Over the course of two weeks, Ledvinka made five different batches and took meticulous notes.

He invited friends over to taste test — most preferred the milder and sweeter versions he made early on. But his sister, Joanne, loved the spicy final result.

"It's very robust," she says. "You can taste the tomato and you can taste these wonderful spices, particularly the clove and the cinnamon. I just enjoy the heck out it."

Joanne said it was even better than grandma's. Jim dubbed his adapted recipe "Bohemian Ketchup" in honor of Antoinette Ledvinka's Bohemian ancestry.

Jim says the tart and heavy clove flavor might not be anyone else's ideal ketchup, but he still loves it — though he remembers grandma's version having an even more intense clove flavor.

He's since poured his homemade ketchup over meatloaf and hamburgers — anything with ground beef. But now he needs more. This summer, as tomatoes turn red, ripe and juicy, Ledvinka will be back in the kitchen making ketchup, just like his grandma used to do.

This is Jim Ledvinka's take on his grandmother's recipe, adapted from The Settlement Cook Book (The Way to a Man's Heart), 1903. Canning is optional if you won't use it up right away.

1. Remove bad parts from the tomatoes. Wash and quarter them and add them to a very large stock pot, along with the onion, garlic, and cayenne pepper. Crush that mixture a bit to provide some liquid. Bring to a slow simmer for 30 minutes. Let cool.

2. Run the contents of the stock pot in batches through a food mill. The old-fashioned kind of food mill with a fixed fine disk works best.

3. Return the milled mixture to the stock pot and simmer very slowly (to keep the tomatoes from burning), until the volume is reduced by about one-half. It should have the consistency of thick tomato sauce. This step may take six to twelve hours, maybe more, depending on the tomato variety. Let cool.

4. Run the contents of the stock pot in batches through a blender.

5. Return the mixture to the stock pot and bring to a simmer until the mixture is the consistency of commercial catsup. This step may take six hours or more.

6. Add the remaining ingredients, bring to a simmer, and reduce to the desired consistency.

7. Prepare a canner with jars and and lids sufficient for about 8 - 10 pints of catsup: Fill canner with water to at least 1 inch above tops of jars, and add a little vinegar. Bring to boil for 15 mins. Place lids, funnel, tongs, and ladle in saucepan with water, bring to a low simmer.

8. Use the tongs to remove the jars and lids one at a time from the canner, pouring the jar water back into the canner. Fill each hot jar with catsup, leaving 1/2-inch of head space. Wipe the rims of the jars, affix the lid, screw the band on finger tight, and return to the canner. Replace the lid on the canner and process in boiling water bath for 15 minutes. Remove jars from canner, listen for a ping as the catsup cools and the lid pops into place. Test the seal by pressing down on the lid; it should not give. Let the jars rest until cool. Store in a dark place.