Accessibility links
Are Antibiotics On The Farm Risky Business? : The Salt Farmers give antibiotics routinely to pigs, beef cattle and poultry. They say the drugs help keep animals healthy and get them to market faster. Others say this practice practically guarantees that bacteria will develop resistance to these antibiotics more quickly, endangering human lives and the long-term viability of the drugs. 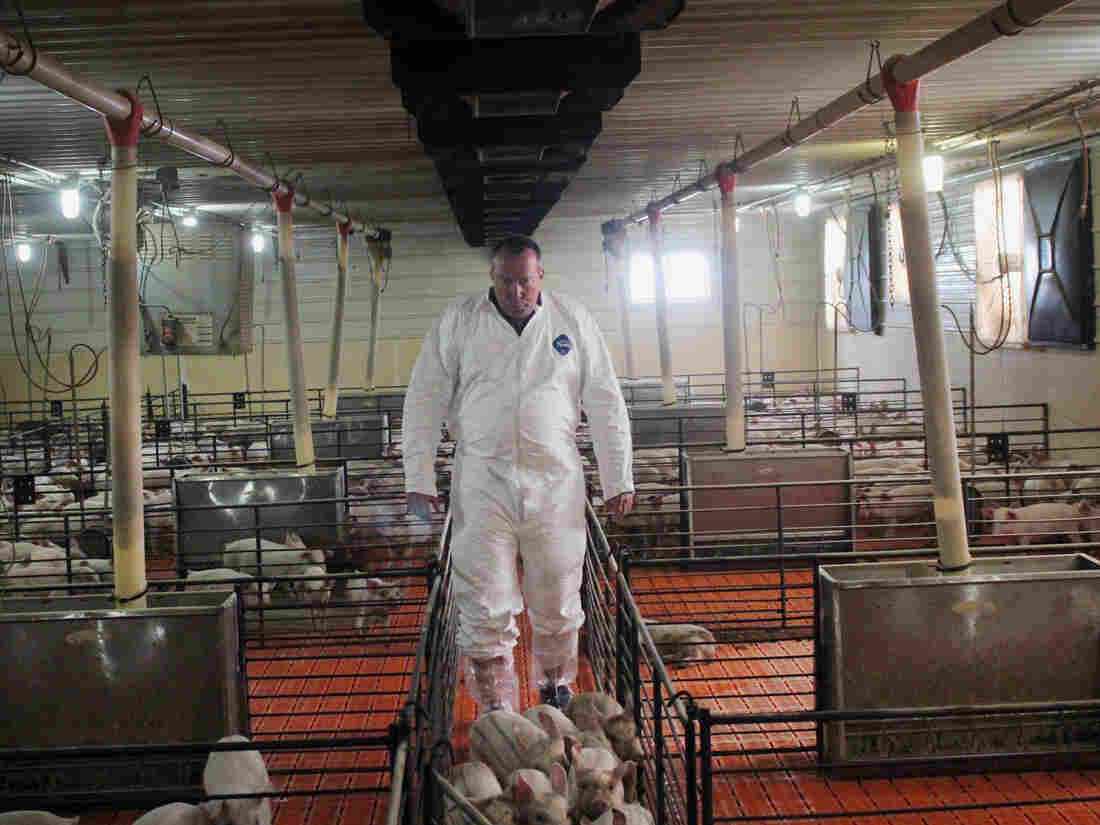 Craig Rowles tends to his pigs in a barn near Carroll, Iowa. Dan Charles/NPR hide caption 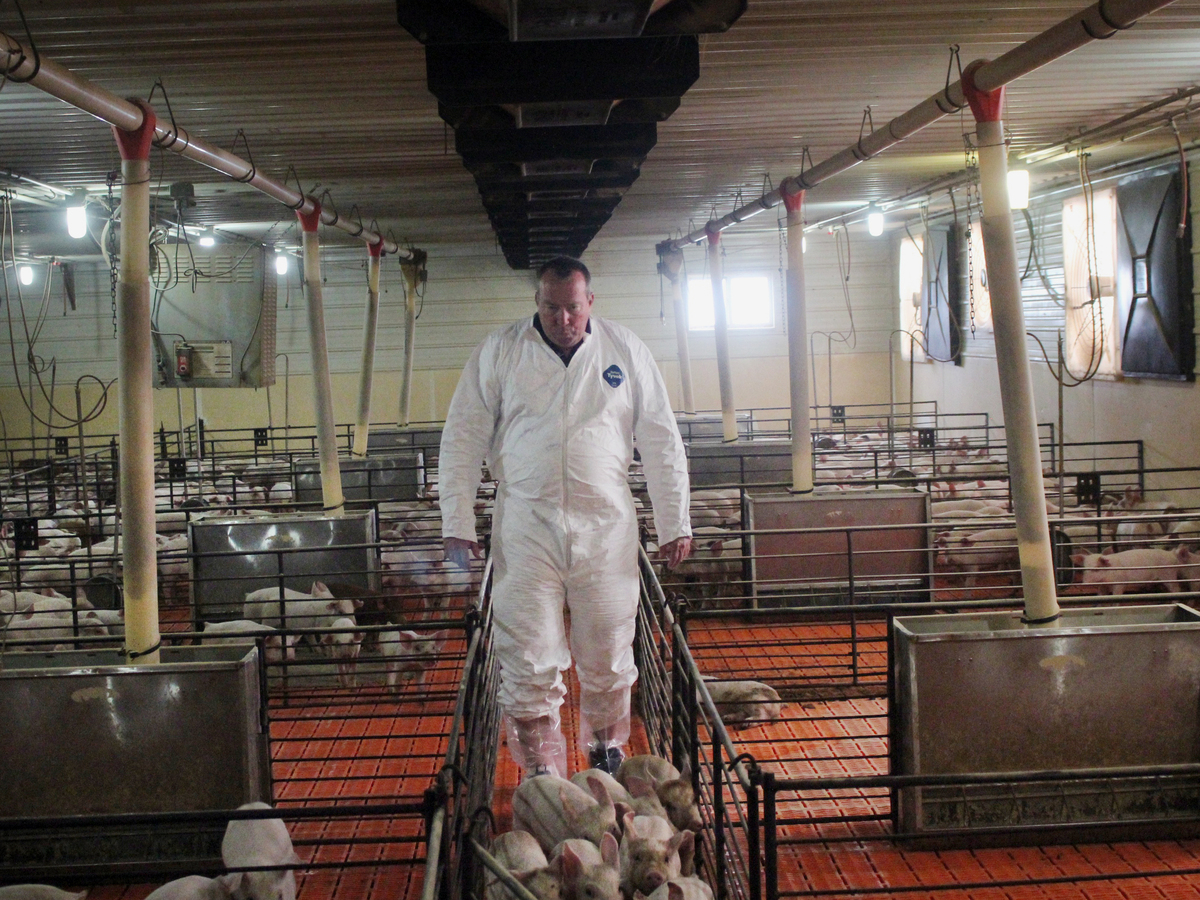 Craig Rowles tends to his pigs in a barn near Carroll, Iowa.

You've probably seen the labels on meat in the store: "Raised without antibiotics." They're a selling point for people who don't like how many drugs are used on chickens, turkey, hogs and beef cattle.

Activist groups, as well as prominent medical organizations, are calling for stricter rules on how these drugs are used. At the moment, there are few restrictions on agricultural use; farmers can buy most antibiotics for the animals over the counter.

There's a passionate but often confusing debate about this. Here at The Salt, we've decided to spend some time digging into this issue to provide more clarity. (To be honest, we needed a little clarity ourselves.)

Today, we're starting with one very narrow question: What exactly is the danger of antibiotic use on the farm? Also, why do scientists disagree about how big that danger might be?

He takes me into a large room, the nursery, filled with 1,000 little pigs. They're a month old, just weaned from their mothers a week earlier. This is when they're most likely to get sick. And Rowles tells me that some are sick with the flu.

He won't try to treat the flu directly, but he does try to keep it from leading to more deadly bacterial infections. So he's giving all the pigs in this barn two different antibiotics in their drinking water: tetracycline, which is an older antibiotic; and tylvalosin, a newer drug, part of the class of antibiotics called macrolides, which includes the human drug azithromycin.

They'll get those drugs for seven to 10 days — or maybe longer if they still seem in danger. "When they need it, we treat them. If they don't need it, we don't," Rowles says.

A couple of months from now, when these pigs leave the nursery, they'll start getting another antibiotic in their feed, even if they're healthy. This drug, virginiamycin, is supposed to help pigs grow faster, or use feed more efficiently.

This pattern of antibiotic use is fairly typical. Most chicken farmers, pig farmers and beef producers use antibiotics to treat disease, prevent disease and promote faster growth. The percentage of antibiotics used for growth promotion is a matter of dispute, because the Food and Drug Administration's annual report on antibiotic use in farm animals doesn't provide that data. Some critics have claimed that it makes up most antibiotic use on the farm. A survey of antibiotic use in the pork industry found that the share was about 20 percent.

It all adds up to a statistic that shocks many people, and it's quoted often by critics of antibiotic use on the farm: 80 percent of all the antibiotics in the United States go into farm animals.

But this is where the big argument starts. Scientists disagree about whether this is something that we should worry about.

The worry is not so much that antibiotics will be in the meat we eat. By the time an animal is slaughtered, those residues are supposed to be gone. According to the Department of Agriculture, almost all of the time, they are.

The concern is around a different risk: That using antibiotics on the farm will mean that these drugs won't work when we humans need them, because in theory, the more an antibiotic is given to animals, the more quickly bacteria will adapt and become resistant to it. 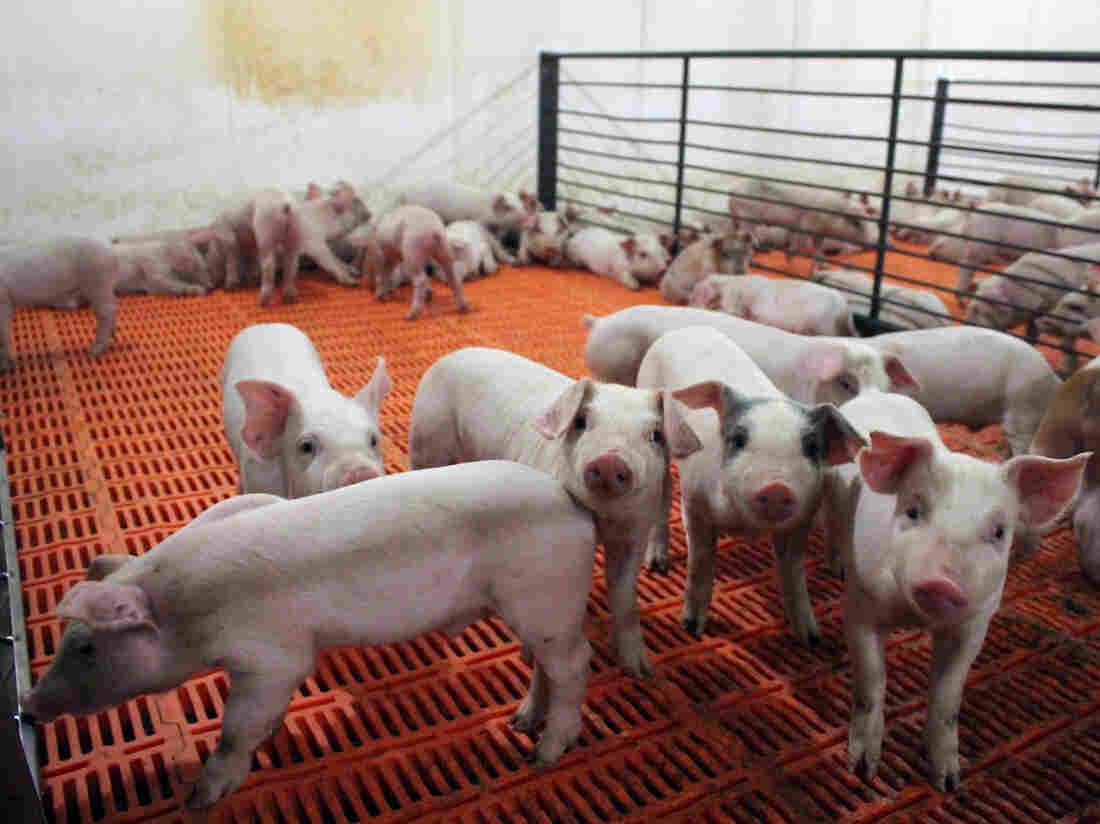 These pigs, newly weaned from their mothers, are at their most vulnerable stage of life. They're getting antibiotics in their water to ward off bacterial infection. Dan Charles/NPR hide caption 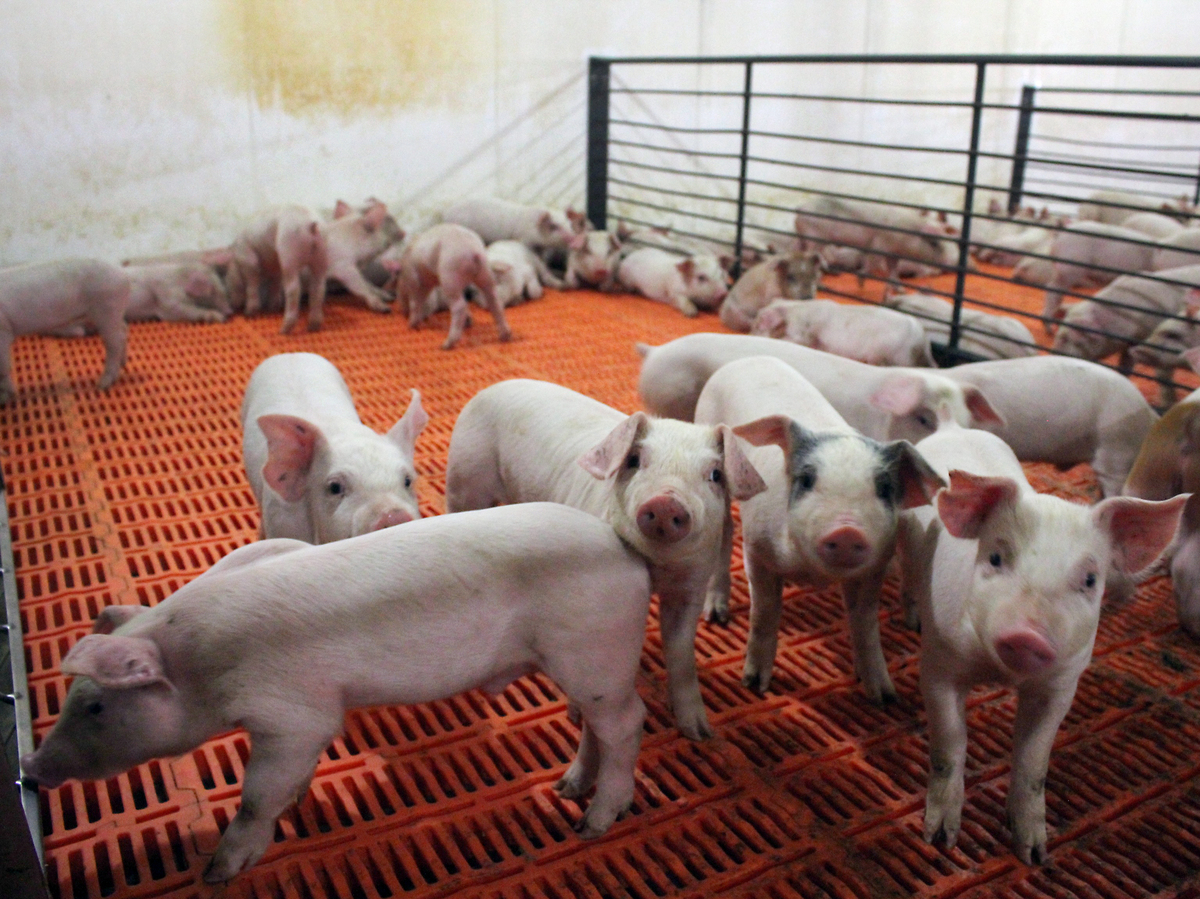 These pigs, newly weaned from their mothers, are at their most vulnerable stage of life. They're getting antibiotics in their water to ward off bacterial infection.

Here's an example: A few months ago, a patient was going through chemotherapy at the National Institutes of Health near Washington, D.C. He came down with a terrible case of diarrhea. "He constantly needed to be rehydrated. We moved him to the ICU for a little bit of monitoring for a while," says Elise O'Connell, a physician in training at the NIH, who was caring for the patient.

Tests revealed that the man was infected with campylobacter, a bacteria that you usually pick up from contaminated chicken or turkey. This seemed odd, until the physicians realized that this patient's family had brought in some food from home, and that another member of the family who'd eaten that dish also had gotten sick for a couple of days.

The choice of treatment seemed obvious. "We started him on an antibiotic called azithromycin," recalls O'Connell.

At first the patient got better — and then he got worse again. Azithromycin wasn't working.

O'Connell switched to a different antibiotic, and that one did work.

So why didn't azithromycin work?

Possibly, because on a farm somewhere, chickens were getting treated with macrolide antibiotics — very similar to azithromycin. Campylobacter in the chicken may have become resistant to these antibiotics, then hitched a ride aboard meat to O'Connell's patient.

That's the risk many people working in public health say is very real. But there's passionate disagreement about how worrisome it is, and what we should do about it.

On the one hand, we have Scott Hurd, a veterinarian at Iowa State University who's generally sympathetic to meat producers. He points out that it's not enough just to show that something can happen. "In order to make effective, science-based decisions, we have to move beyond the 'cans' to actually calculating the probabilities," he says.

Think of all the things that have to come together before this actually would happen, he says.

First of all, bacteria have to become resistant to an antibiotic that's actually used to treat people. But, in fact, around three-quarters of the antibiotics that farmers use on animals are not used at all by humans or are used infrequently, such as tetracyclines or virginiamycin. So only a small portion of farm use could create bacteria that are resistant to drugs that you'll use.

"And then you've got to get those bacteria off the farm. And then someone has to get sick with those bacteria," he continues. This also shouldn't happen very often, he says, if people are careful about cooking and handling meat.

Finally, you have to get so sick from the contaminated meat that you need antibiotics. That doesn't happen very often, either. O'Connell's patient needed treatment because he was in chemotherapy; his immune system was compromised.

The point is, this whole chain of events is rare, Hurd says. It's not a big danger to the public. "All published, peer-reviewed scientific articles to date have demonstrated negligible risk from on-farm antibiotic use," he says.

Gail Hansen, a veterinarian who is now working with the Pew Health Group and a critic of antibiotic use on the farm, is unimpressed by Hurd's analysis. "If you just look at — does this antibiotic, given to this animal, make this person sick, so we can't treat them with that same antibiotic — that's such a very narrow piece of this whole interconnected puzzle," she says.

First of all, this kind of case may not happen often, but it's a big deal if it happens to you, she says.

But there are other risks that can't be so easily calculated.

For instance, bacteria have the peculiar ability to share genes, including genes that make them resistant to particular antibiotics. So there can be drug-resistant bacteria on meat that don't make us sick. Once in your gut, they could pass along their drug-resistance to bacteria that can make us sick.

It's spread on fields; it can go into waterways. There's not much research on this, but it probably increases the number of antibiotic-resistant bacteria everywhere.

When and how might some of those bacteria make us sick? We don't really know, Hansen says, but it's not a risk we should take. "If we don't have all the information we need to know for sure whether something is bad or not, let's give the environment and the people and the animals the benefit of the doubt, and not continue to do something that might be harmful," she says.

So this is where the argument ends up: When risks are uncertain, what do you do?

The Food and Drug Administration is working on rules that would stop antibiotics from being used just to help animals grow faster. The rules may also require farmers to get a veterinarian's approval before using most of these drugs.

Hansen wants the agency to go further and allow antibiotic use only when animals are sick or clearly in danger of getting sick. Scott Hurd disagrees; he says if farmers can't use antibiotics to prevent disease outbreaks, they'll end up with more sick animals. And that's not good for farmers or consumers.

Some of the antibiotics used on the farm are very similar to the drugs prescribed by doctors to treat people. Critics of antibiotic use in food animals say this is one reason why farmers should be more careful about how much and which drugs they use — they could be jeopardizing human health if bacteria become resistant to the drugs over time. But bacterial resistance to drugs doesn't always develop the same way or at the same rate. And some drugs given to animals aren't important for humans — for example, ionophores. Below is a table showing where animal and human antibiotics overlap. It includes the classes of antibiotics (cephalosporins, fluoroquinolones, macrolides and lincosamides) health authorities are most worried bacteria will develop resistance to, which could put human lives at risk. — Eliza Barclay