Accessibility links
How Much Arsenic Is Safe In Apple Juice? FDA Proposes New Rule : The Salt The FDA's proposal would set a threshold of 10 parts per billion for inorganic arsenic in apple juice — the same standard used for drinking water. In 2011, a pair of investigations raised alarms about the levels of inorganic arsenic, a carcinogen, in the juice. 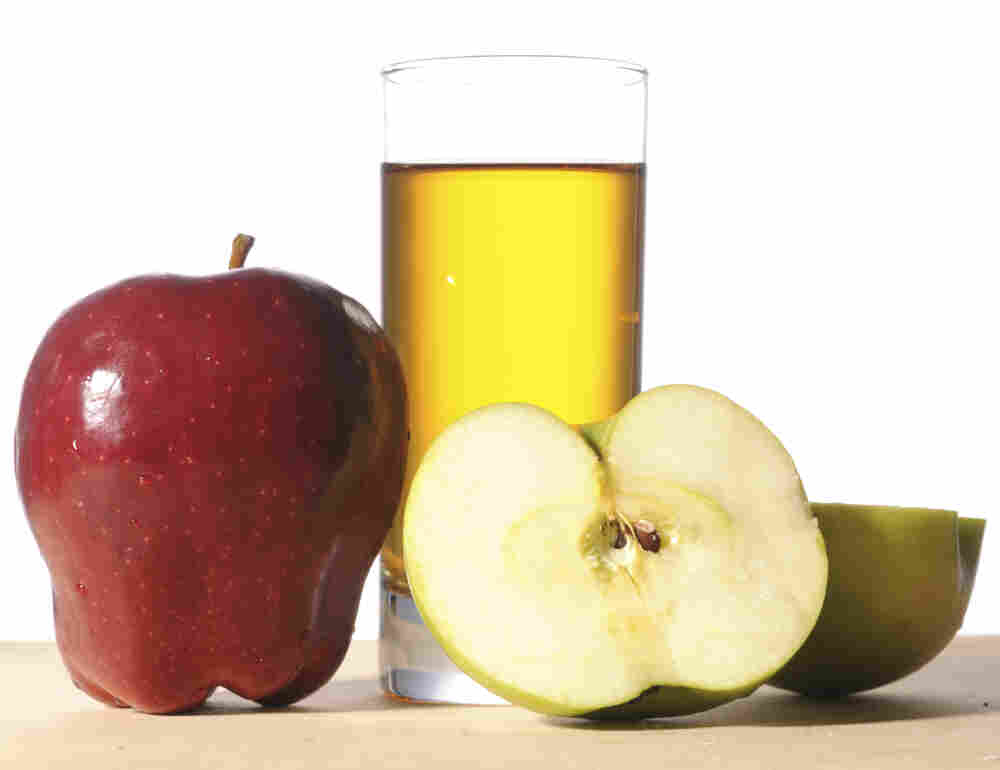 Here's some news for parents of the sippy-cup crowd: The Food and Drug Administration has proposed a 10 parts-per-billion threshold for levels of inorganic arsenic in apple juice. This is the same level set by the EPA for arsenic in drinking water. Right now, there is no FDA standard for apple juice.

Now, we've told you about the brouhaha over trace levels of arsenic commonly found in apple juice before.

Back in 2011, after Dr. Mehmet Oz released the results of an investigation that found that some of the nation's best-known brands contained arsenic, he was criticized for needlessly worrying parents.

As we reported back then, Dr. Richard Besser, former acting head of the Centers for Disease Control and Prevention, took on Dr. Oz in a heated exchange on Good Morning America, calling the report "extremely irresponsible," since the study only looked at total levels of arsenic. In other words, the study did not distinguish between organic arsenic, which occurs in nature and passes quickly through the body, and inorganic arsenic, the carcinogenic form.

Since arsenic is present naturally in the environment, lots of foods, from rice to chicken, include trace levels. And past use of arsenic-containing pesticides has also led to concentrations of arsenic in soils. Additionally, much of the apple juice sold in the U.S. is made with apples from China.

But Oz was not alone in raising alarm bells. A few months after the controversy surrounding Oz's study, Consumer Reports published the results of its own investigation that found roughly 10 percent of juice samples in its testing had total levels of arsenic that exceeded federal drinking-water standards — and most of that arsenic was the toxic kind.

In proposing the new arsenic threshold, FDA Commissioner Margaret Hamburg said in a release, "We have been studying this issue comprehensively, and based on the agency's data and analytical work, the FDA is confident in the overall safety of apple juice for children and adults."

The FDA has been monitoring levels of arsenic in apple juice for 20 years. In its latest analysis, released last year, of 94 samples of apple juice, the agency found that 100 percent of the samples fell below 10 ppb for inorganic arsenic.

Concerns have also been raised about the levels of arsenic found in rice. An FDA spokesperson told us by email that the administration is following the same process it used with apple juice to assess arsenic levels in rice. "Once we complete our analysis, we will begin our risk assessment" and determine the next steps.

Consumer Reports was quick to weigh in on the FDA's announcement.

"We are pleased to see the Food and Drug Administration taking this action," says Urvashi Rangan, director of consumer safety and sustainability at Consumer Reports. "Proposing a 10 ppb guidance for apple juice — the same level set for water — is a reasonable first step in protecting consumers from unnecessary exposure to arsenic."