Accessibility links
In Argentina, Coca-Cola Tests Market For 'Green' Coke : The Salt Argentina is the site of the global kickoff of what Coke is describing as a "natural" and "green" lower-calorie cola. Coca-Cola Life contains stevia instead of sugar, and comes in a bottle that's made partially from plants. 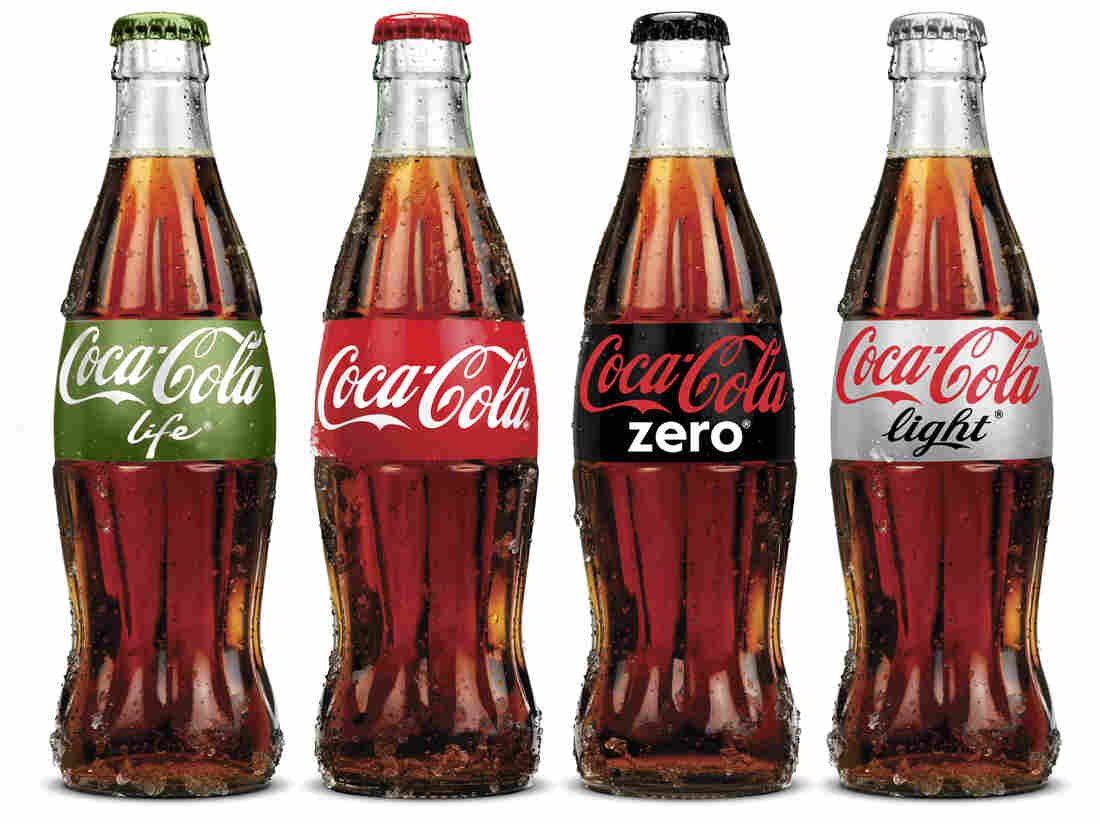 The new Coca-Cola Life that is popular in Argentina is being marketed as a "natural" and therefore "green" lower-calorie cola. ©coca-cola hide caption 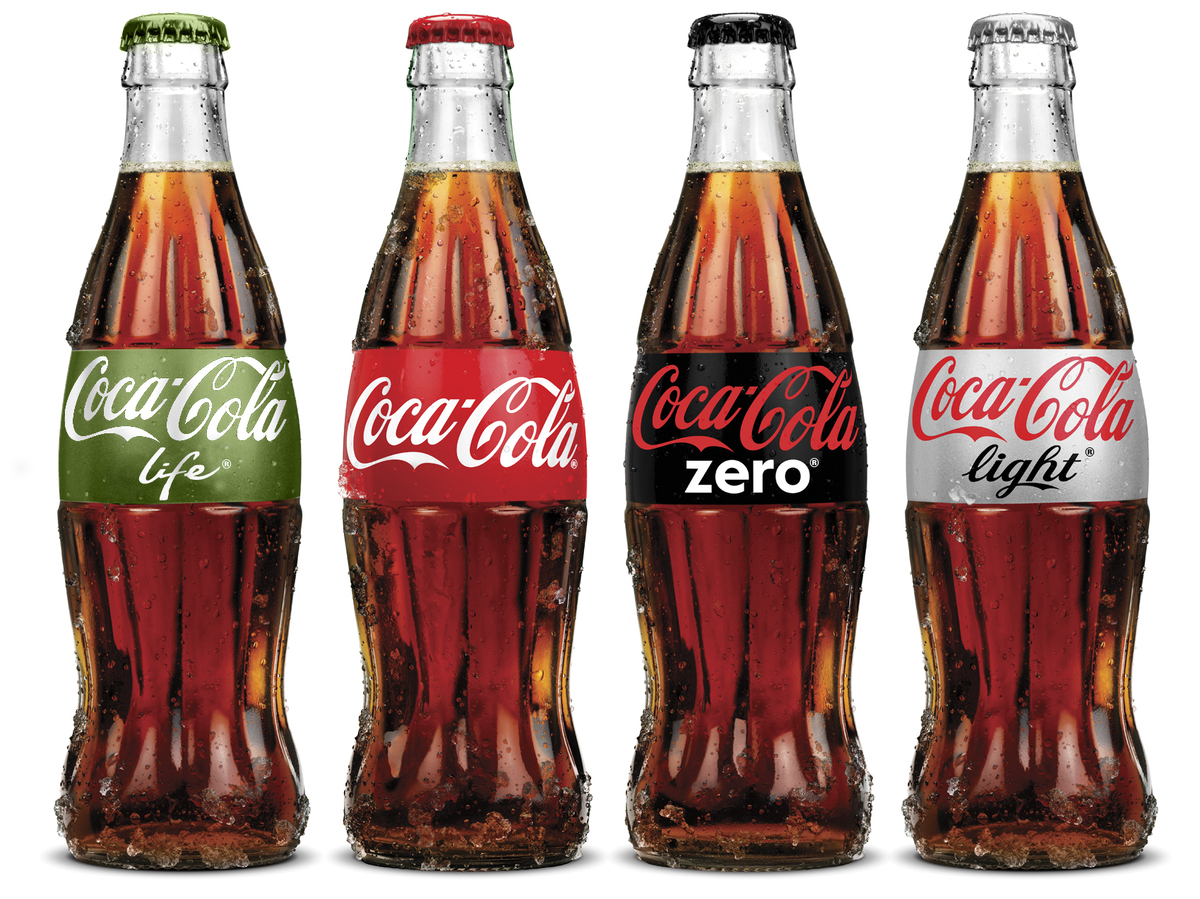 The new Coca-Cola Life that is popular in Argentina is being marketed as a "natural" and therefore "green" lower-calorie cola.

To escape Washington's summer's swelter, I've flown to Argentina and discovered that there's one big surprise among the many things that set this part of the world apart at the moment.

Yes, the steaks are great, the tangos catchy, and the weather here in Buenos Aires cool in July. But who'd have expected that the Coca-Cola logos would often be green?

I used to collect Coke memorabilia, and red is what I've always associated with Coke — a specific, blazing, eye-catching shade of red, in fact. The company does have a rainbow's worth of product packaging these days: blue and green for Sprite; silver and gold for caffeinated and non-caffeinated Diet Coke; black for Coke Zero.

But the colors in the basic Coca-Cola logo — ornate white letters on a red background — haven't changed in over a century. But here in Argentina for the past three weeks, the words Coca-Cola are spelled out in those same ornate white letters on a green background. It's everywhere from a giant electronic billboard in the heart of downtown Buenos Aires, to the sides of delivery trucks, to supermarket shelves, and a TV commercial where a first sip from a green soft-drink can is being likened to a first kiss.

It's the global kickoff of what Coke is describing as a "natural" and therefore "green" lower-calorie cola called Coca-Cola Life. You have to pronounce that word carefully when you order it in Buenos Aires because Diet Coke here is called Coca-Light. This is Coca-almost-Light — right in the middle between Diet Coke and regular Coke at 108 calories for a 600 milliliter bottle (regular Coke has 250 calories, and Diet Coke has no calories.)

What they're claiming makes it "natural" is that Coca-Cola Life is sweetened with a mix of sugar and stevia, an extract from the leaves of a shrub in the chrysanthemum family that grows here in Latin America. You may have seen it sold in packets under names like Truvia in the U.S.

It's said to be as much as 400 times sweeter than table sugar, without the calories, which means soft-drink companies are falling all over themselves to use it. The Coca-Cola company is currently using stevia in 45 products worldwide.

So how does it taste in this one?

I bought a bottle of Coca-Cola Life at a local supermarket along with a bottle of regular Coke, poured them over ice, and tasted them side by side. To my taste buds, they're almost indistinguishable; Coca-Cola Life may be a tiny bit sweeter. Which may account for why the cashier at the store says that two weeks into the multimillion-dollar rollout, the green bottles and cans are selling pretty well, if not quite leaping off the shelves.

Should Coca-Cola Life become a substantial hit in Argentina, it could expand to other markets. If not, it can disappear without the fallout that accompanied the scuttling of New Coke in the 1980s.

The greening of this "natural" product extends beyond the color green in its packaging. It's sold in a "PlantBottle" made of a plastic that's 30 percent vegetable fiber. Coke says it's 100 percent recyclable.

But that's nothing compared to the recyclability of bottles being marketed by the company elsewhere in South America. In Colombia, right on the equator, Coke is being sold at the beach in bottles made entirely of ice.

Though the Ice Bottles are selling for almost twice what a regular bottle of Coke costs at the beach, vendors can barely keep them in stock. They come with a thin plastic band printed with the Coke logo to make them easier to hold. The company, spying a possible logo-fashion opportunity, notes hopefully that the plastic holder can be used as a bracelet once the bottle has melted away.