Accessibility links
Can Oysters With No Sex Life Repopulate The Chesapeake Bay? : The Salt Scientists and watermen have joined forces to plant underwater farms in the Chesapeake with a special oyster bred to be sterile. Instead of using energy to reproduce, these oysters use it all to grow — twice as fast as normal. 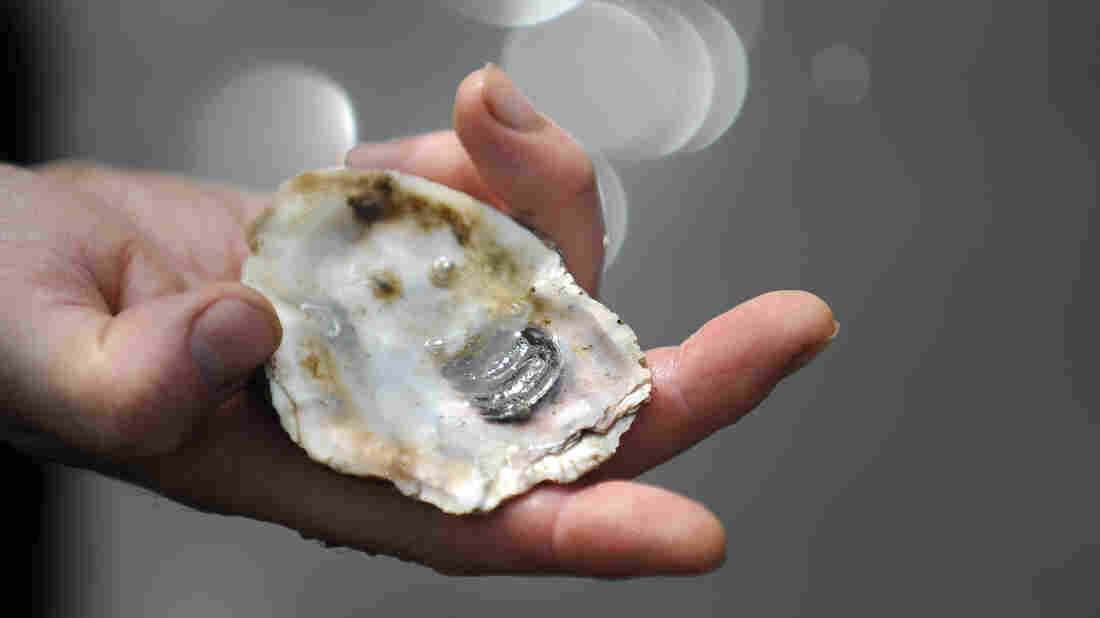 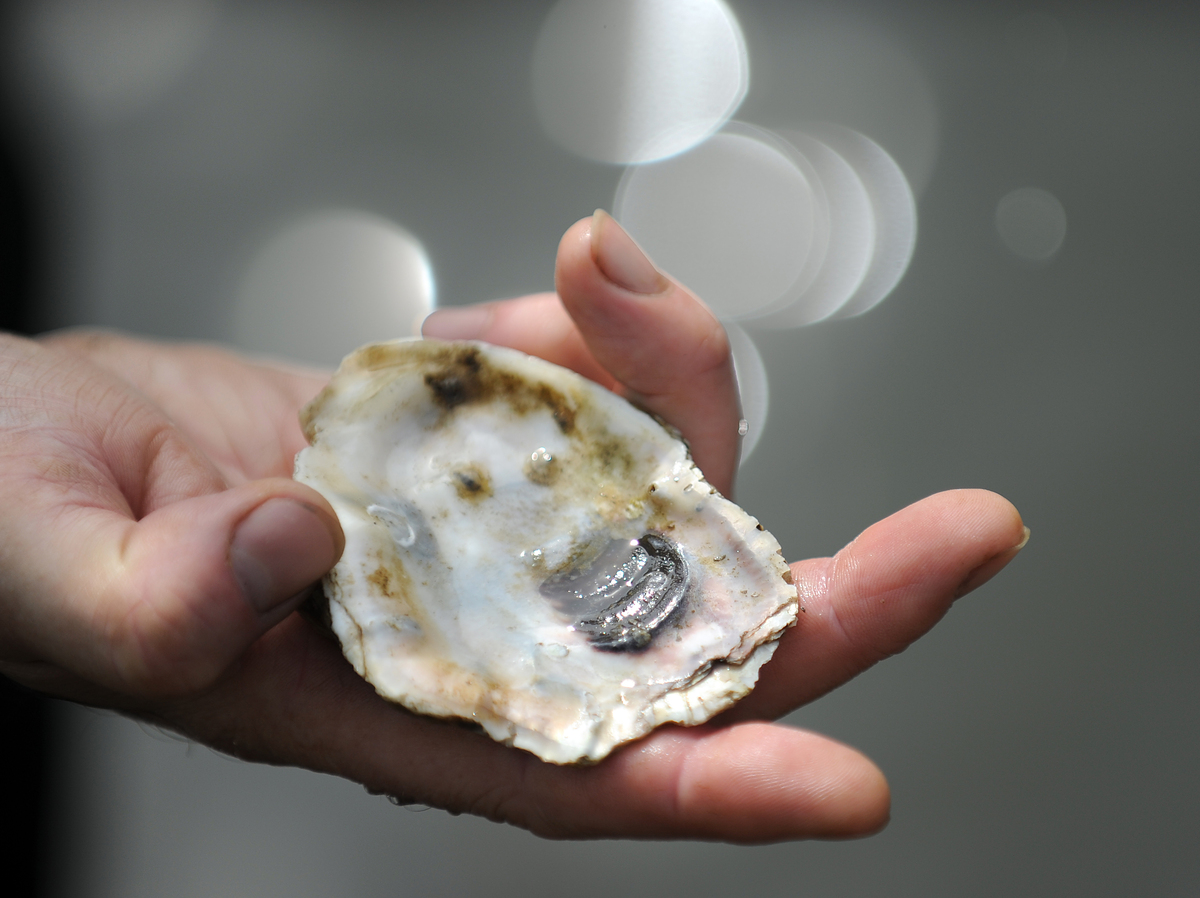 The Chesapeake Bay once supplied half the world's oyster market. But pollution, disease and over-harvesting have nearly wiped out the population. It's a dire situation that's united former adversaries to revive the oyster ecosystem and industry.

Scientists and watermen have joined forces to plant underwater farms in the bay with a special oyster bred in a lab. Called triploid oysters, they have been selected for attributes like disease tolerance and fast growth.

The oysters are sterile, which means that instead of using their energy to reproduce, they use all of it to grow. That allows them to reach market size twice as quickly and be harvested year-round.

"It stays fat all the time," notes Tucker Brown, one of about two dozen oystermen collaborating with scientists on the project.

And when it comes time to plant these lab-bred oysters, says Dave White, a Maryland state biologist, "the watermen have a great input in it, because they're more familiar with the bottom than most of the researchers."

A few years ago, scientists like White might have found themselves fighting with watermen over the best way to manage the oyster. And indeed, decades ago, watermen used to be able to harvest hundreds of thousands of bushels of oysters a year from the Potomac River. But these days, they're lucky to harvest a few thousand, says Jim Wesson, the lead scientist on the project from Virginia.

That's led to collaborations like this underwater farm, one of several ongoing projects that officials in Virginia and Maryland hope will help restore Chesapeake Bay oyster populations. As NPR has previously reported, some projects have focused on using man-made reefs to attract wild baby oysters; others have created oyster sanctuaries where harvesting would be banned. 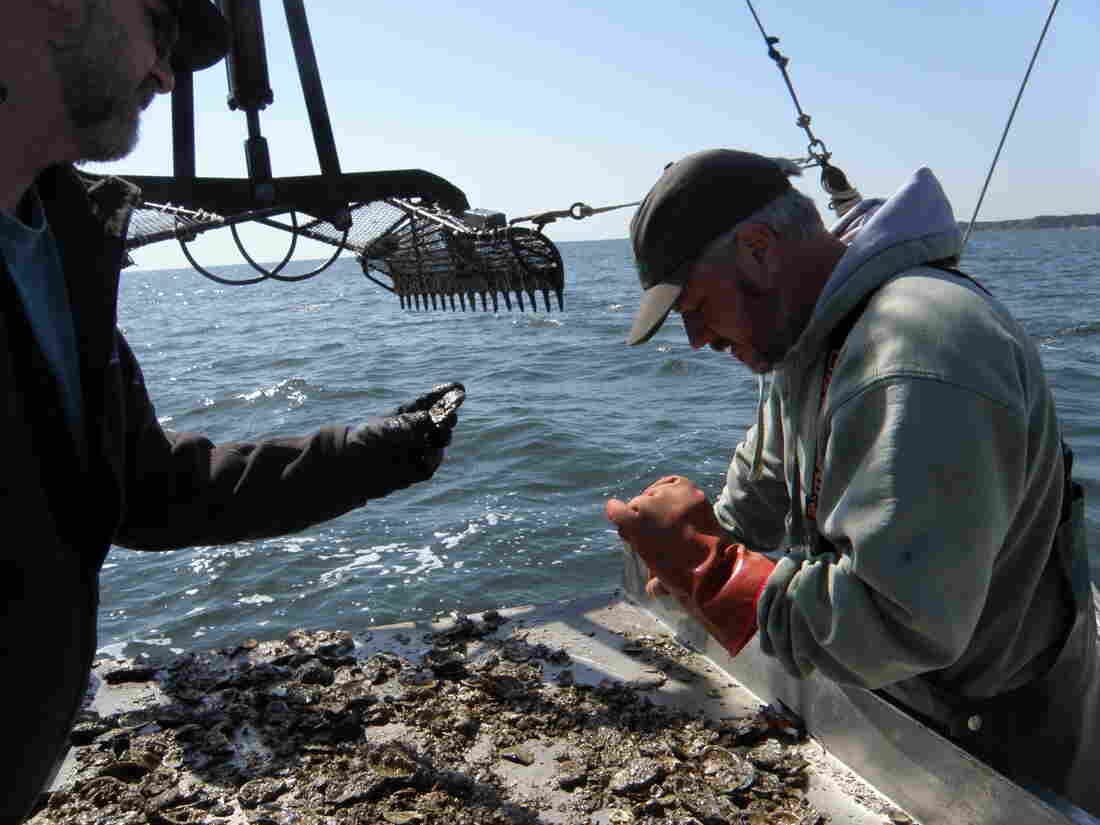 A scientist and a waterman examine oysters hauled up from the Potomac River, which flows into the Chesapeake Bay. Pamela D'Angelo/for NPR hide caption 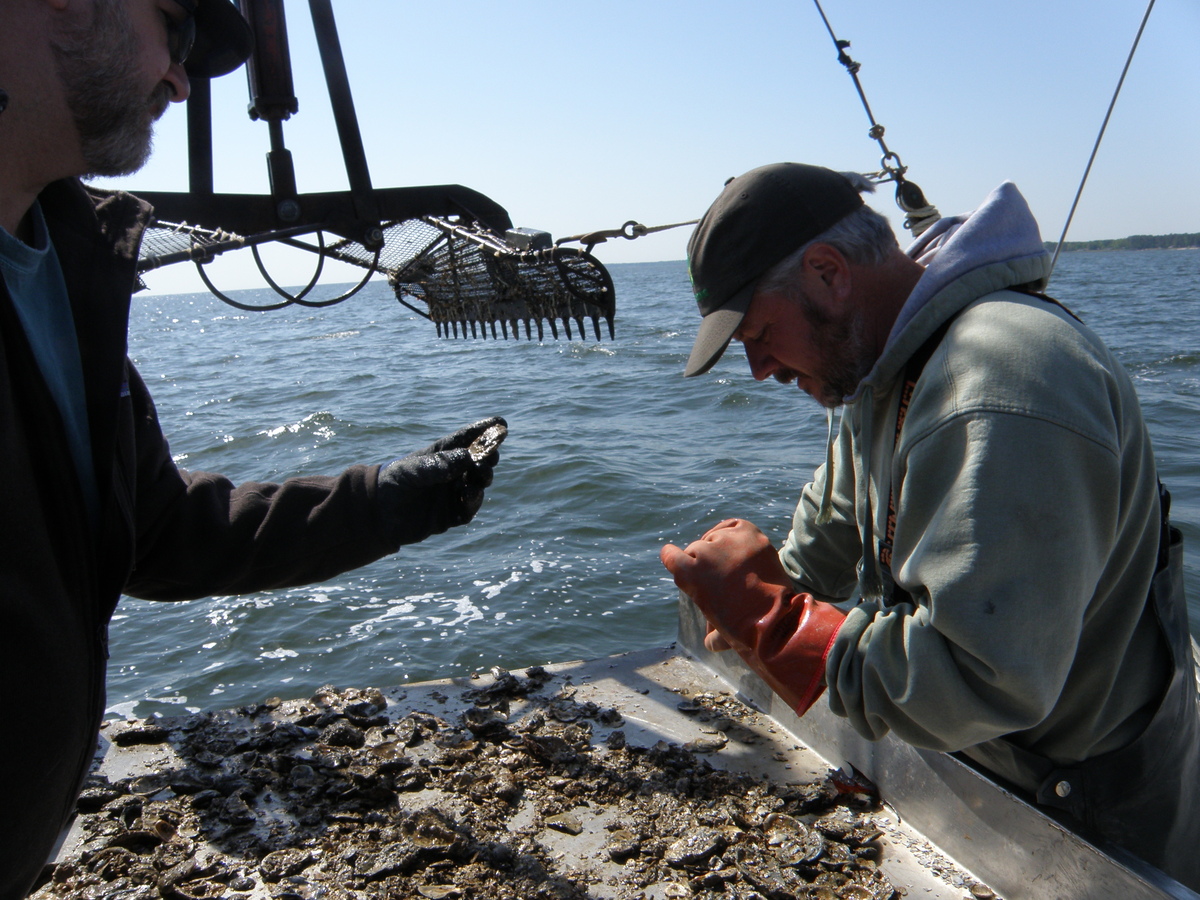 A scientist and a waterman examine oysters hauled up from the Potomac River, which flows into the Chesapeake Bay.

Brown and other watermen are each paying $1,500 to participate in the project. The money goes to pay for things like equipment and oyster larvae — since the triploid oysters can't reproduce, new ones need to be grown each year in giant tanks before they can be planted in the bay. The Potomac River Fisheries Commission kicked in another $150,000.

It took about a year for 20 watermen to commit to the three-year project. They planted the first four acres of river bottom last year. "Once all of us got to the table," Brown says, "and everybody looked at one another and when we started talking, everybody knew, nobody had to say a word, that we were going to be a team."

On a recent morning, Brown and other watermen joined White and Wessel as they navigated the Potomac River, looking for a good spot to plant this year's baby oysters. When they anchored their research vessel at one spot, they lowered a giant claw-like scoop to check on oyster populations below. The spot proved to be a graveyard — nothing but empty oyster shells came back up.

"There's not a single live oyster in it," Wesson says, shaking his head. "Nothing's going to happen here if you don't do something like this."

The shells are a reminder of the bad times that have struck oysters, but they also offer hope: Oyster babies need old shells to anchor themselves as they grow.

The scientists selected five acres where they will plant their specially bred oysters. But the site won't be marked in any way on the water. "We don't want anybody poaching on these oysters," explains Ellen Cosby, who oversees the project for the Fisheries Commission. "We know where it is with the GPS coordinates."

With a bushel — roughly 300 to 325 oysters — wholesaling for about $40, Cosby says "oyster pirates" can be a "real problem down in Virginia. We're hoping that everybody is kind of keeping an eye on things up here."

The scientists also checked on last year's oyster plantings: A majority survived but aren't market size. Still, as the group headed to shore, they remained optimistic.

If all goes well, the oysters will be ready in time for the big demand of the holidays. Until then, the team will worry about predators, poachers and weather.