Accessibility links
Howard Buffett Battles Hunger, Armed With Money And Science : The Salt Warren Buffett's son, Howard, is using his foundation, stocked with $2 billion of his father's money, to address hunger in the U.S., as well as globally. He's trying to use his farming experience to help farmers be more productive and to get more food into the hands of those who need it most.

Get Howard Buffett into the cab of a big ole' farm tractor and he's like a kid — albeit a 58-year-old, gray-haired one. He's especially excited when it comes to the tractor's elaborate GPS system, which he describes as "very cool."

He says that the tractor has been automatically set to plant 16 perfect rows of seeds, "so it makes everything more efficient. And it's going to give you a better crop in the end." 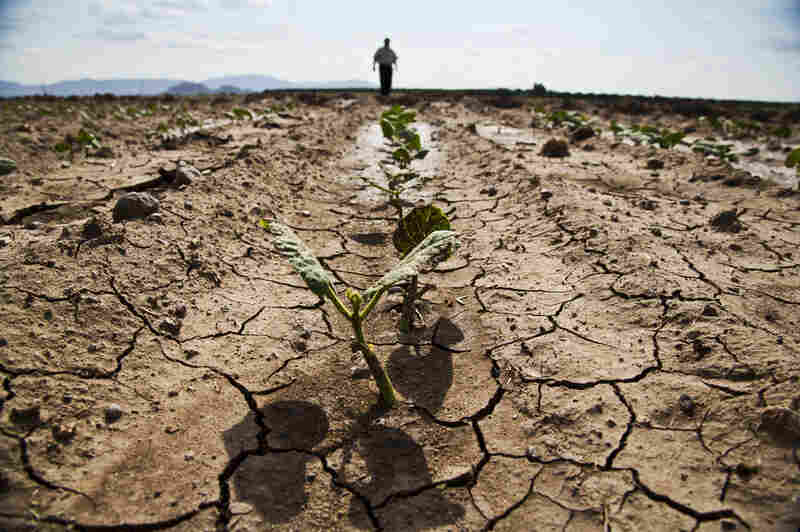 At his 1,400-acre research farm in Wilcox, Ariz., Howard Buffett is trying to make drought-prone land more productive, and then figure out how to get that information to struggling farmers in Africa and elsewhere. Nick Oza for NPR hide caption 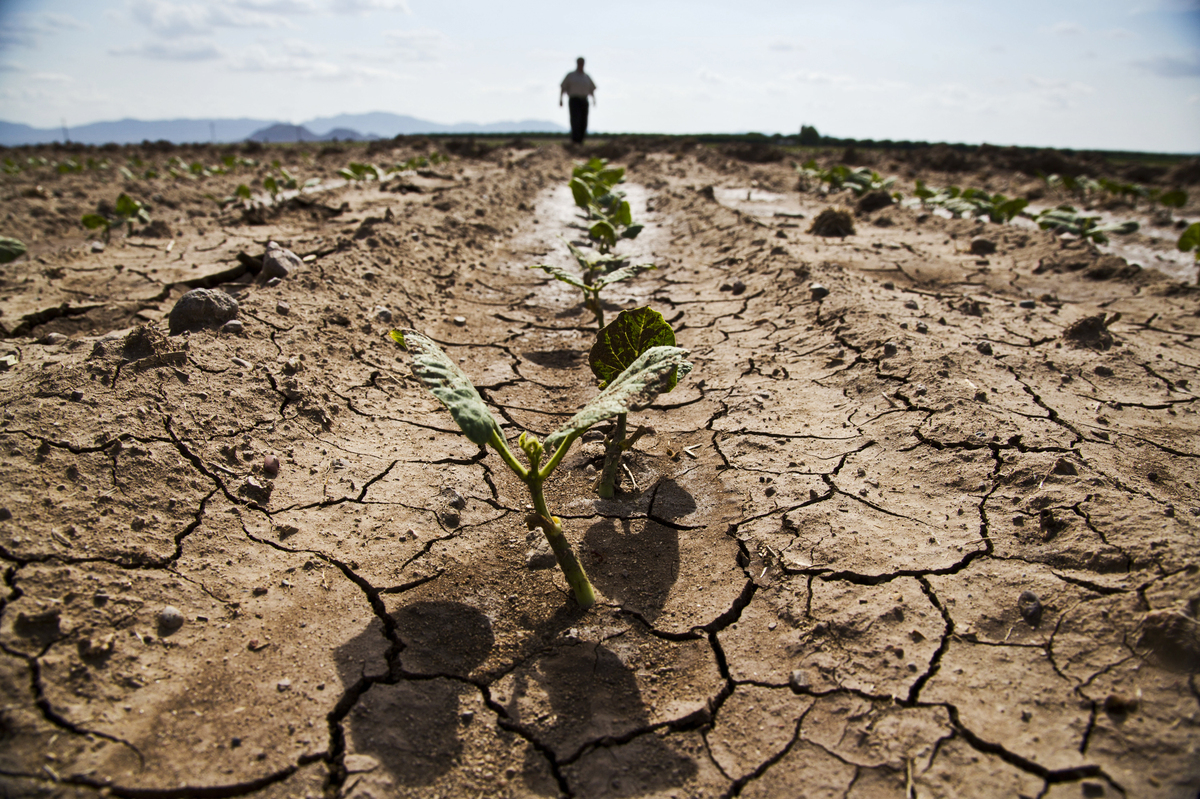 At his 1,400-acre research farm in Wilcox, Ariz., Howard Buffett is trying to make drought-prone land more productive, and then figure out how to get that information to struggling farmers in Africa and elsewhere.

What Buffett hopes to get out of his 1,400-acre research farm in southern Arizona, about an hour east of Tucson, are better crops and more efficient land use, for poor subsistence farmers and also for large corporate farmers. It's part of the work he and his charitable foundation, the Howard G. Buffett Foundation, are doing to try to reduce hunger around the world.

When Buffett was a kid, he loved to play in the dirt, and he grew up to be a farmer. So, when his father gave him money to run his foundation — about $2 billion so far — it wasn't hard for him to figure out what he wanted to do.

Buffett says it makes no sense that millions of small farmers around the world have trouble feeding their own families, and that millions of Americans struggle to get enough nutritious food to eat.

That's why Buffett has this research farm and two others like it, in Illinois and South Africa. Driving around the hot Arizona desert, he checks in with one of his managers on how things are going. What makes Buffett so unusual for a rich philanthropist is he's down to earth, totally hands on.

They test a lot of things here: soil content, planting techniques and irrigation. They're trying to learn how to make drought-prone land more productive and then figure out how to get that information to struggling farmers in Africa and elsewhere. 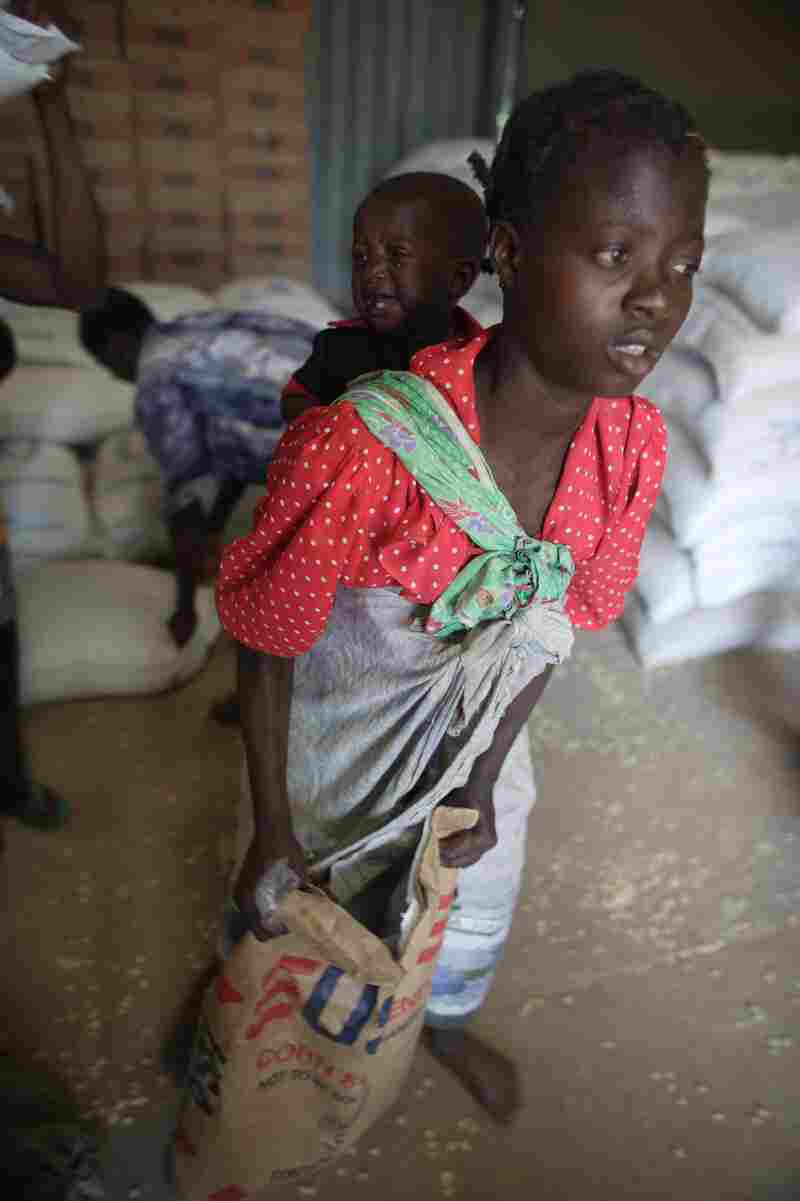 Along with his foundation and his farm, Howard Buffett uses photography to raise awareness of hunger issues. In 2006, he photographed a girl receiving food aid at a World Food Program distribution site in Malawi, where 5 million people needed emergency food assistance. Howard G. Buffett hide caption

Buffett says they're even testing two oxen — named Ike and Earl — to see what farm implements they can carry and for how long, to help poor farmers use the animals more efficiently.

Buffett has received many awards — including one from the U.N. World Food Program — for the global work of his foundation.

But recently he's decided to turn more of his attention to domestic hunger. He says it didn't make sense to ignore what was going on in his own backyard. And while it might not be as obvious as elsewhere, he says, hunger in the U.S. does exist.

So last year his foundation teamed up with Feeding America, a network of U.S. food banks, to set up a program called Invest an Acre. It encourages farmers to donate an acre or more of their crop proceeds to local food banks.

Buffett is also experimenting with a plan to let farmers use land for free, if they donate half the crop to a food bank. Last year, he grew 60,000 pounds of pinto beans for the Community Food Bank of Southern Arizona, based in Tucson.

Bill Carnegie, who runs the food bank, says Buffett came by one day and asked how he could help. Carnegie told him that protein-rich pinto beans were an important staple for his clients.

"He probably saved us somewhere around $100,000 on this one contribution. So we're just very happy," Carnegie says.

He's also happy that Buffett has such a holistic approach to hunger: that it's not just about getting a bunch of food and giving it to those who need it, but figuring out how to make them more self-reliant in the long run.

Carnegie says the economy might be recovering for some, but the lines outside his doors continue to grow. Buffett says it doesn't have to be like that.

"Eliminating hunger in America is doable, because we have the resources to do it," he says.

Buffett recalls visiting a school in his hometown of Decatur, Ill., where 92 percent of the students get free or reduced-price meals. He says the irony is that the school is near the world's largest corn plant, which processes hundreds of thousands of bushels of corn each day.

"The trains go out of town past kids that don't get to eat every day," he says.

Buffett says he'll never forget a couple he met at a food bank in Fresno, Calif. — an unemployed accountant and her husband, an out-of work aerospace mechanic.

Certainly not the one he grew up with, in his wealthy family. Buffett knows he's been given a huge gift. He says that's why he's trying to do something that will have a lasting impact on those who aren't so lucky.