Accessibility links
Texas Pit Masters Bask In Moment Of Barbecue Glory : The Salt When Dallas barbecue restaurant Pecan Lodge opened three years ago, there was no line of customers waiting to taste the brisket. But that all changed when Texas Monthly barbecue critic Daniel Vaughn rated the Pecan Lodge barbecue among the very best in the state. 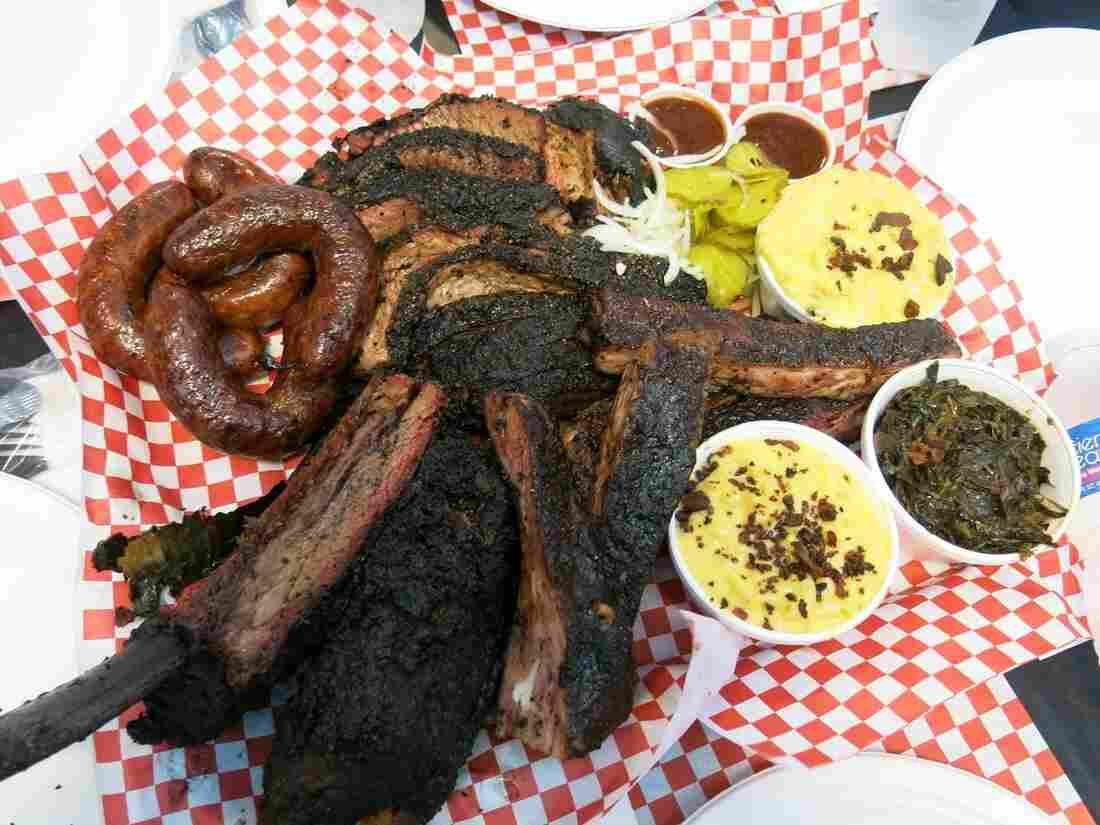 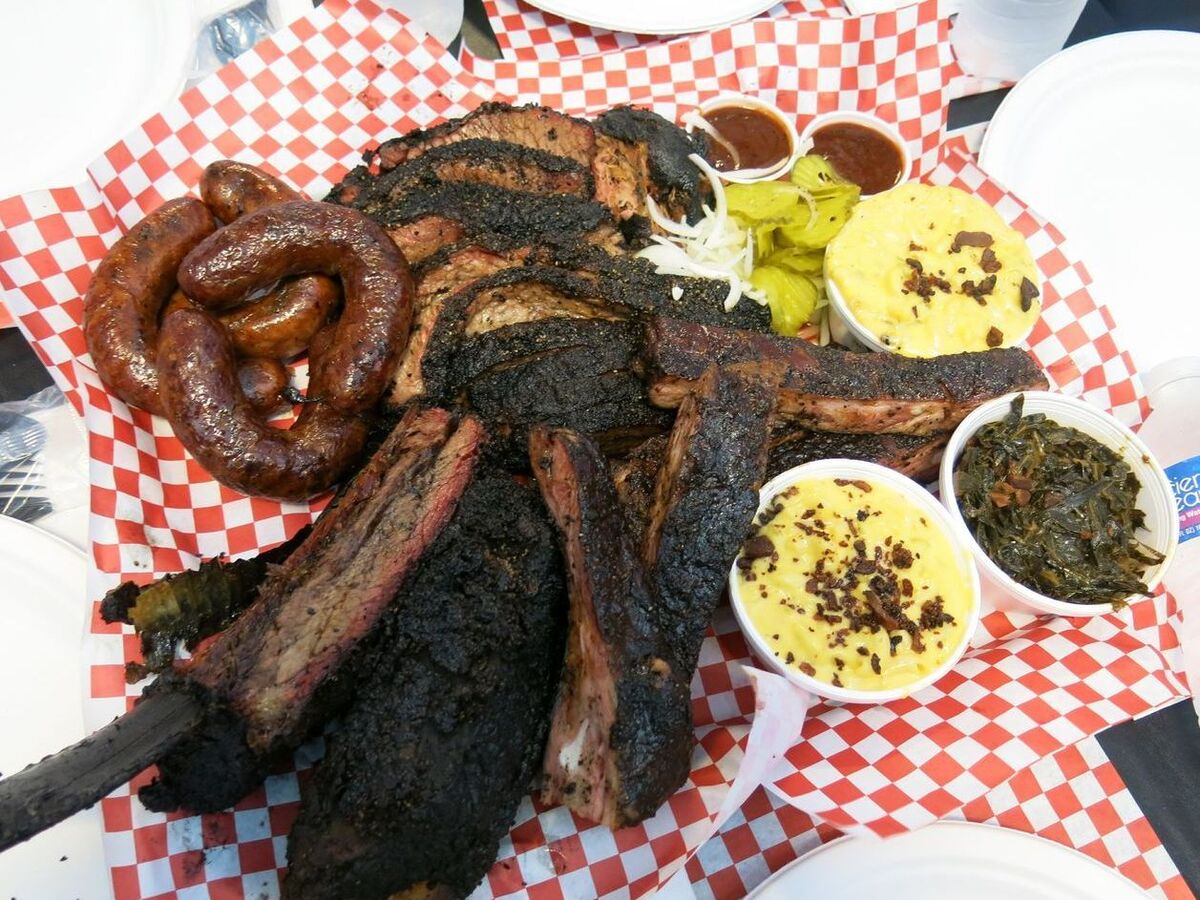 It's not even noon yet but every table out front of the Pecan Lodge in downtown Dallas is filled with veterans with barbecue heaped on their plates, smirking at the gobsmacked newbies. First timers are easily discernible by the stunned looks on their faces when they walk in and see the line.

Half the people standing in line are not even going to get barbecue; it's going to run out before they can order. A little after noon, owner and pit master Justin Fourton comes out, gauges the line and then tapes a sign warning that barbecue supplies are dwindling.

When Fourton and his wife, Diane, first opened Pecan Lodge three years ago, it was nothing like this.

"In the beginning, you know, it was just the two of us and a couple employees," says Diane Fourton. "On Sundays, we'd roll the TV out and watch the Cowboy game back here in the kitchen and we had a sign that we'd set up on the counter that said, 'Ring the bell for service.' So in case a customer came up, we wouldn't miss them."

But that was before the sage of Texas barbecue, Daniel Vaughn, discovered them. Vaughn is barbecue editor at Texas Monthly, and he rated the Fourtons' restaurant as the fourth best barbecue joint in Texas in the magazine and in his book, The Prophets of Smoked Meat, published in May. 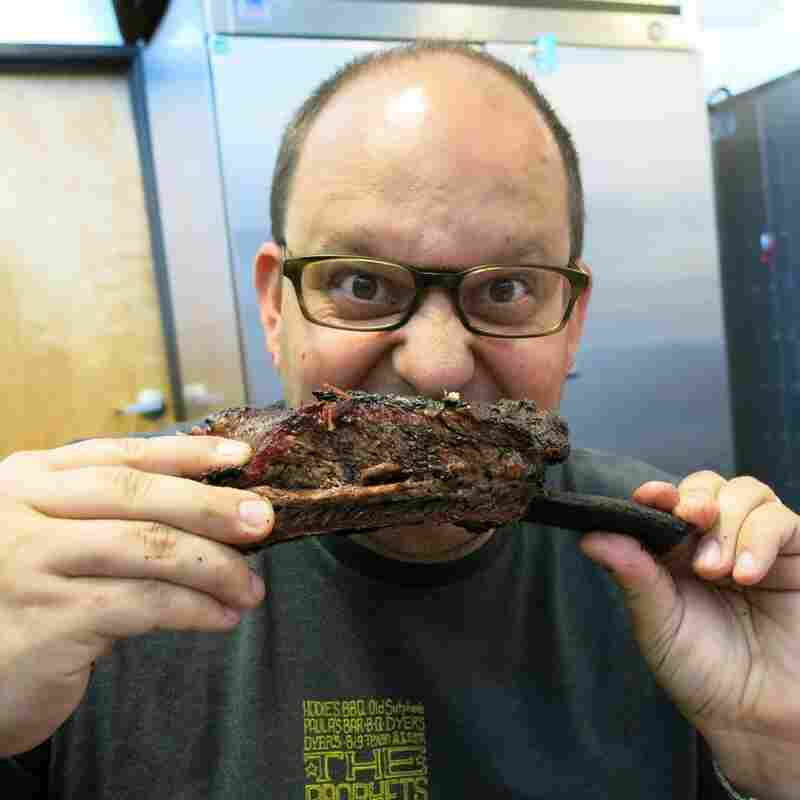 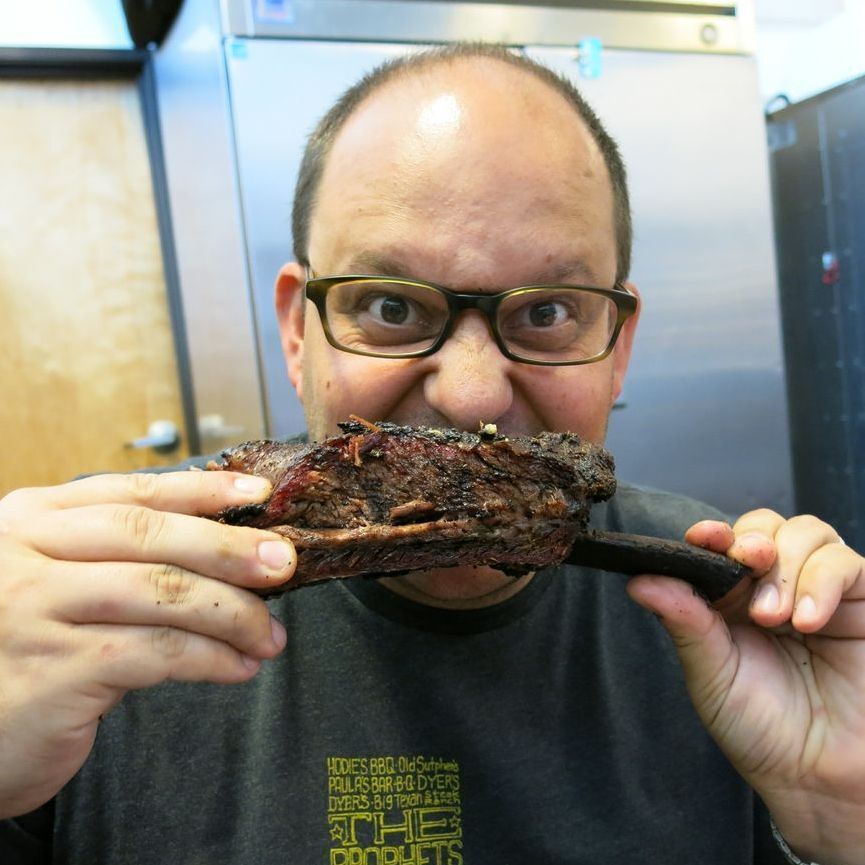 Daniel Vaughn digs into some expertly smoked ribs at the Pecan Lodge.

Diane Fourton remembers the exact moment they heard they were number four on the list.

"It was like winning the lottery — we just leapt in the air," she says. "We were screaming, there was champagne popping ... it was like crazy, crazy awesome joy."

Vaughn is not even from Texas — he's a transplant from Ohio. But after traveling more than 10,000 miles and eating at more than 600 barbecue joints, there's few on the planet who've put such a wide variety of Texas barbecue to the test.

Vaughn often traveled with a photographer, which would invariably attract attention. The owner, upon finding out Vaughn's mission, would ask, "So what do you think?"

"Well, if the barbecue is not any good and they ask what I think, I'll just find something that I liked about it and I'll say, 'The potato salad was really good' and leave it at that," Vaughn says.

But of course some owners really want to know. Vaughn recalls one joint in East Texas where the owner pressed him about the quality of the brisket.

Vaughn told him it was incredibly tough. "I could barely pull it apart; it just really wasn't that good at all," Vaughn recalls. "And of course he comes back out, he's got these little nuggets of brisket, they're nice and tender, really good. It's just like, 'Well, why aren't you serving this to everybody?' "

Vaughn's motto is "I eat the lousy barbecue so you won't have to." And he says it's brisket that is the pinot noir of Texas barbecue.

Chicken and ribs and sausage and pork all have their important places. But if you want to be considered one of the great pit masters, your brisket is what gets you admitted or not into the barbecue Hall of Fame, he says. This is because it's so labor-intensive and so difficult to make tender, juicy brisket with just the right sublime smoky flavor.

This little nugget of wisdom is Texas gospel. Pecan Lodge attracts some of the most knowledgeable customers in North Texas, like Dixon Wiles. He says anyone can learn to make good pulled pork or ribs.

"But the real trick — and I've been working on this for 20 years myself — is cooking brisket and doing it right so that it doesn't dry out and that it turns out tender and that it's great," he says.

This is why the restaurant owners are almost always the pit masters, too. It takes Justin Fourton 15 hours on average to cook a brisket. This means he's up at 2 a.m. to make sure the pit fire is just right.

A huge barrel-like barbecue pit holds dozens of briskets. It's stunning to think that all this meat will be gone in just a couple of hours — there's only lunch at Pecan Lodge.

"It's all manual. It's just basically the wood and the meat and the seasoning that we put on it, and that's pretty much it," says Fourton.

Before he became a pit master, Fourton was a consultant at Accenture who regularly worked 60 hours a week. He says this is much harder — it's 130 degrees in the smokehouse in the summer and he says he never gets enough sleep. And while he's ready for a bigger restaurant, he says there never will be more than one, because he doesn't think he can keep the quality the same.

"This is hardest work I've done for the least amount of money that I've ever made," he says.

From Lockhart to Driftwood to Taylor to Austin and now in Dallas, too, a new generation of pit masters are making their mark. You can tell just how good they are by the length of the lines outside their barbecue joints.