Accessibility links
The FDA Doesn't Want Chickens To Explore The Great Outdoors : The Salt The FDA's new proposal aims to reduce the risk that chickens will pick up salmonella from wildlife and lay contaminated eggs. But some farmers worry that the guidance could make it much harder for them to let their birds range freely on pastures. 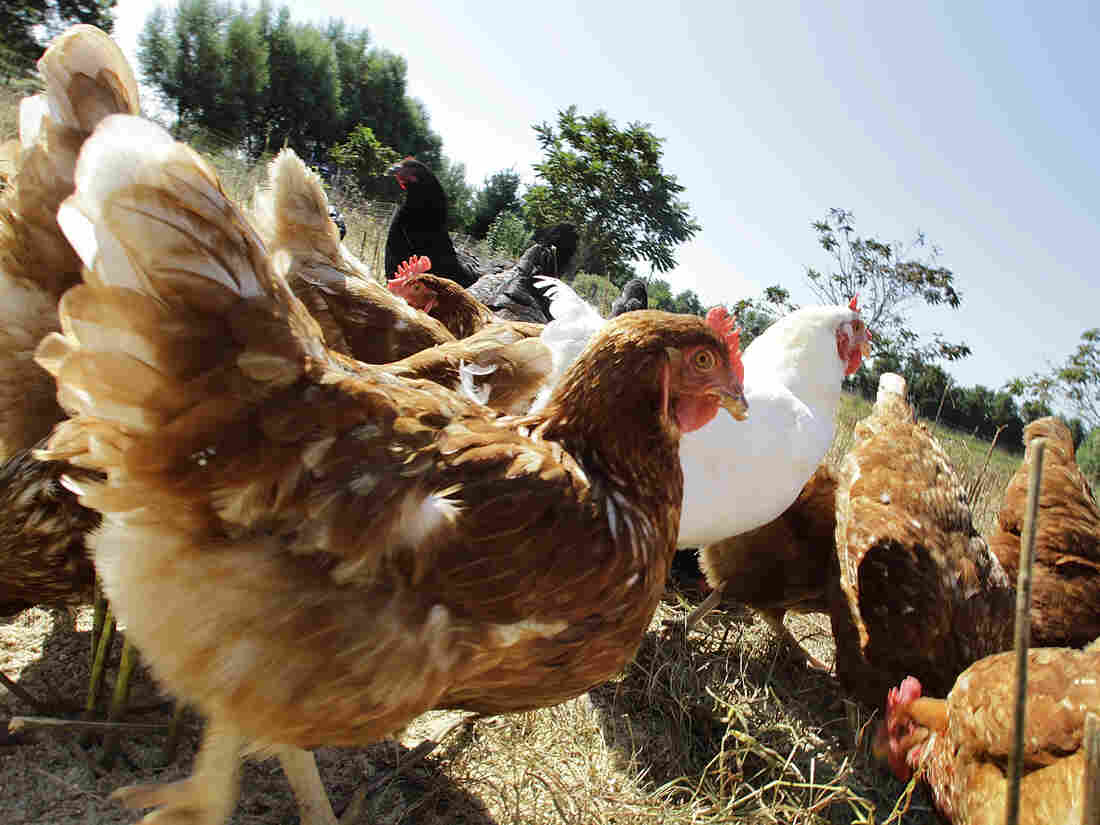 Free-range chickens feed in a pasture on an organic farm in Illinois. Seth Perlman/AP hide caption 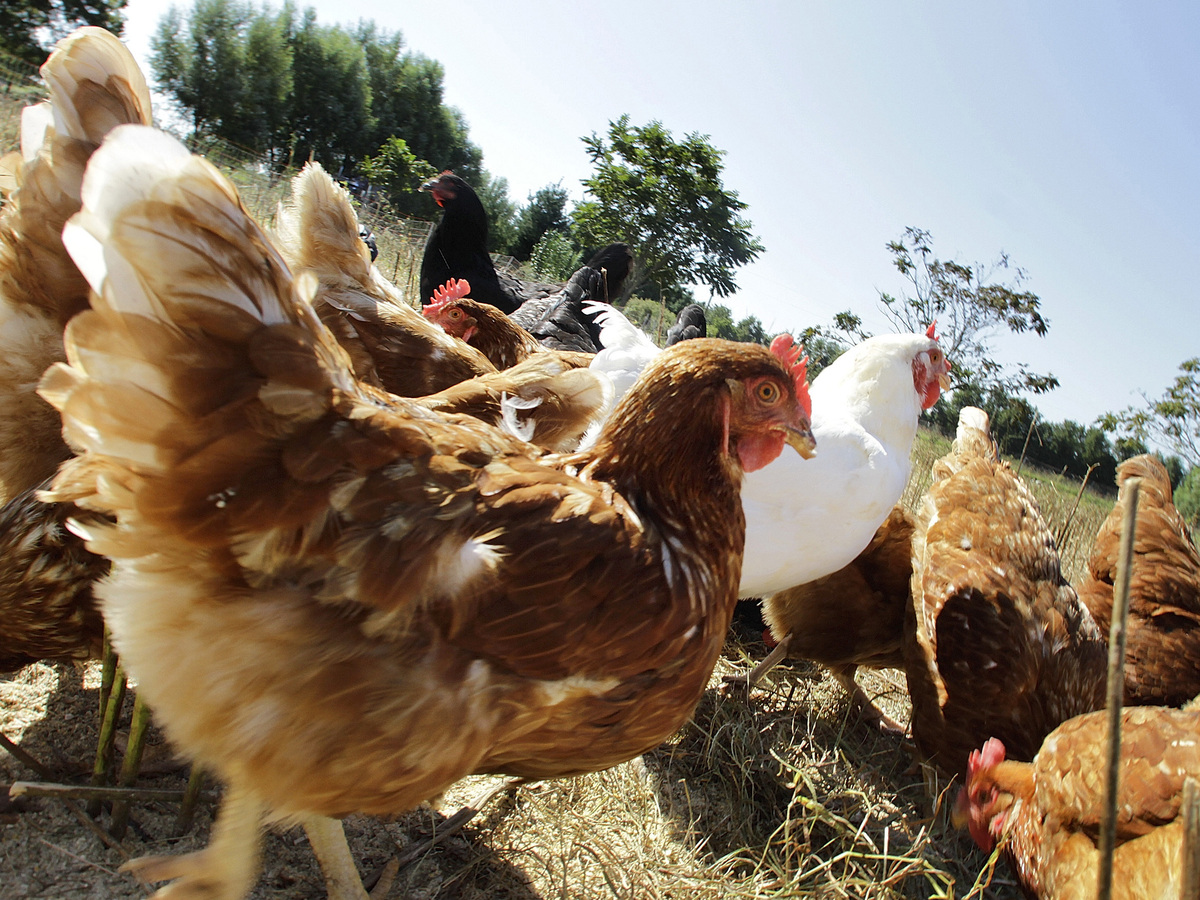 Free-range chickens feed in a pasture on an organic farm in Illinois.

Organic egg farmers are divided in their reaction to a new FDA proposal that's intended to reduce the risk of salmonella infection among free-roaming chickens. They even disagree about what the document, called "Guidance for Industry," actually requires.

On the face of it, the document seems to demand that egg producers keep their chickens strictly separate from any wildlife. That's because studies show that wildlife and their droppings often carry salmonella bacteria. For that reason, the FDA issued rules back in 2009 ordering farms to keep all mice, rats and wild birds out of chicken houses. The rules now apply to all farms with more than 3,000 laying hens.

That puts organic producers in a bind because the rules for organic production require egg-laying chickens to have "access to the outdoors" whenever the weather allows it. Inevitably, those chickens will encounter wild birds or mice.

So what's an organic producer supposed to do? The FDA guidance proposes a number of answers: Fences to exclude cats and other animals, traps or bait to control mice and voles, and roofing or netting to keep out wild birds. Egg producers also could confine their chickens inside during times when migratory birds insist on entering grazing areas.

How onerous is this requirement? The Cornucopia Institute, which has been campaigning to keep organic farming true to its alternative roots, called the draft regulations a plot by the FDA and the USDA to "eliminate true organic production," with chickens grazing on pastures.

Cameron Molberg, general manager of egg production at Coyote Creek Farm in Elgin, Texas, says the rules could even destroy his business. At Molberg's operation, called World's Best Eggs, 10,000 egg-laying chickens graze on 60 acres of pasture, where they scratch in the dirt for worms and bugs.

Building a canopy over the pasture, Molberg says, isn't financially feasible. Even protecting a small part of it "would cost 10 times more than our entire profit last year." Also, any structure that cuts off sun or rain would quickly turn a grass-covered pasture into dry dirt. "It kind of defeats the purpose of pastured eggs, to be honest," he says.

Molberg is convinced that the new rules aren't necessary. He tests his farm's eggs for salmonella and has found none. "A hen in a natural environment is less stressed, and she's less likely to get sick," he says.

On the other hand, David Bruce, who's in charge of egg production at Organic Valley, doesn't think that the FDA guidance will create any problems at all.

According to Bruce, the FDA's "guidance" document is simply a recommendation, but it does not have the legal force of an actual regulation. "It's not something that they're going to enforce," he says. "What they're trying to do is make sure that you aren't being sloppy. That you have a plan" to manage the risks that wildlife can pose.

Some large-scale organic producers have their chickens go "outdoors" by moving to "porches" or "runs" that are next to chicken houses. These areas often are much smaller than the houses, and frequently are covered and enclosed by screens.

Bruce says that such hen houses make up only a small portion — less than 10 percent — of Organic Valley's egg production. The rest of the hens, he says, do graze outside. Bruce says the company has no plans to enclose them.

There's little solid evidence that eggs from chickens on pasture are more likely to carry salmonella. A study in Great Britain, in fact, found less salmonella contamination in eggs from non-caged chickens. (Many cage-free chickens, however, are kept indoors.)

As it happens, the release of the FDA guidance coincides with a related dispute that has divided organic egg producers.

The Organic Standards Board recently considered a proposal, backed by the Cornucopia Institute, that would have required organic egg producers to provide at least 5 square feet of outdoor space per hen. The institute has put together a rogue's gallery of organic henhouses that offer chickens only limited access to the outdoors.

Large-scale organic producers, however, succeeded in defeating the proposal, arguing that it would have driven some of them out of the organic side of the egg business.