Accessibility links
If It Crawls, It's Canned: Eating In The Alaskan Wilderness : The Salt On Alaska's Prince of Wales Island, where a latte costs $6 and a fresh watermelon runs $15, canning is a survival skill. Locals aren't shy about preserving the fat of the land — from salmon to seals to bears and some vegetarian treats, too — in a jar.

If It Crawls, It's Canned: Eating In The Alaskan Wilderness

If It Crawls, It's Canned: Eating In The Alaskan Wilderness 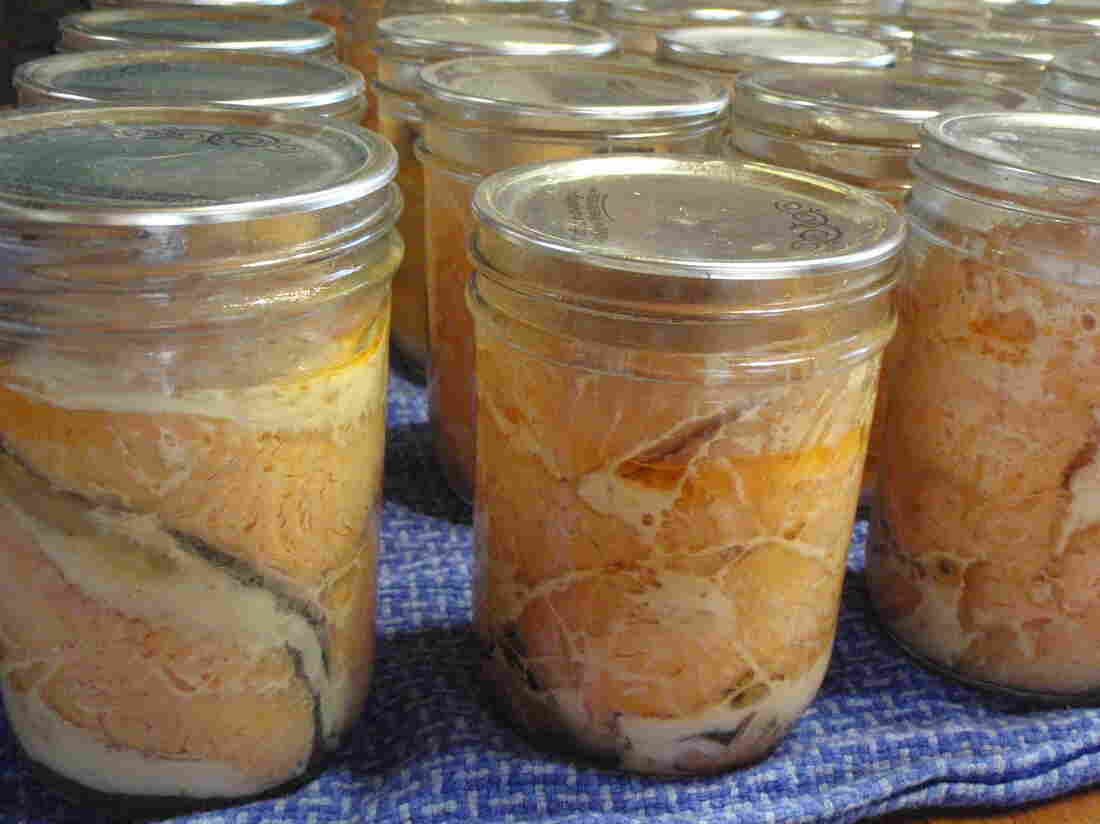 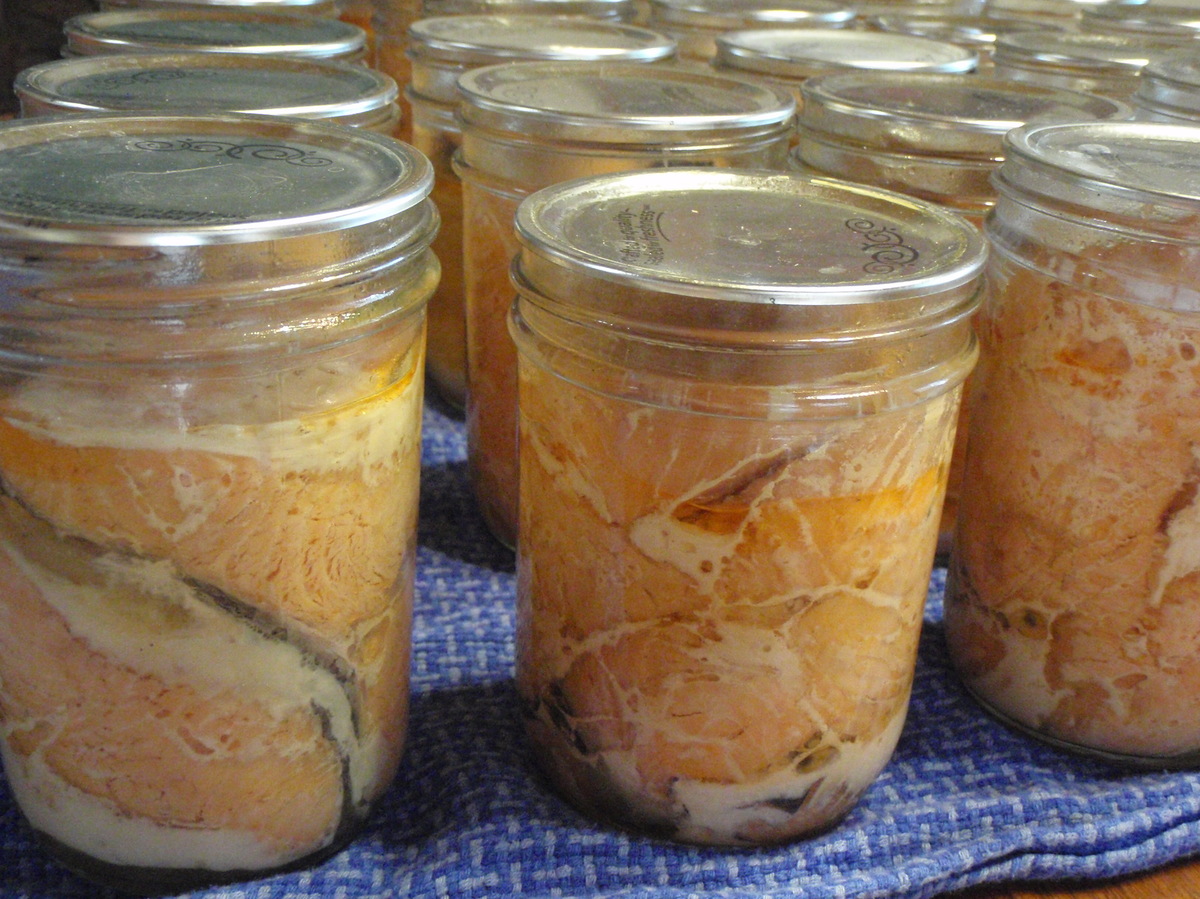 Nobody throws away a mason jar on Prince of Wales Island. On this rugged mass of mountain, forest, river and sea in southeast Alaska, most of the several thousand year-round residents subsist at least partially off the generous fat of the land. And much of the bounty is pressure cooked, preserved and stored away for the future.

"If it stops crawling long enough, we'll put it in a jar," says Jon Rowan, a schoolteacher in the town of Klawock, on the island's west side.

Rowan hunts, harvests and cans nearly every sort of creature that lives in the diverse, rain-drenched ecosystem of the region. His cellar is crammed with hundreds of jars of salmon, halibut, rockfish, lingcod, deer and even seal, which Rowan can legally shoot because he — like many of the island's several thousand people — has Native American roots.

Seal blubber, Rowan says, is cooked for hours before going into the jar. It may be used for cooking or simply melted over rice — "kind of like how you use soy sauce at a Chinese restaurant," Rowan says. The meat of local seals is also canned.

Mary Anna Murphy is one of only two permanent residents of the small Wadleigh Island, which flanks the west central shore of Prince of Wales (locals call it POW) just two miles from Klawock. On her 17-foot Boston Whaler, Murphy regularly makes the two-mile commute to town — often to bring jars of home-canned goods to her friends. Murphy — who has been certified as a "master canner" through a weeklong course in Juneau — keeps her pantry stocked with jars of salmon, halibut and deer, which Murphy says she usually shoots from her bedroom window. 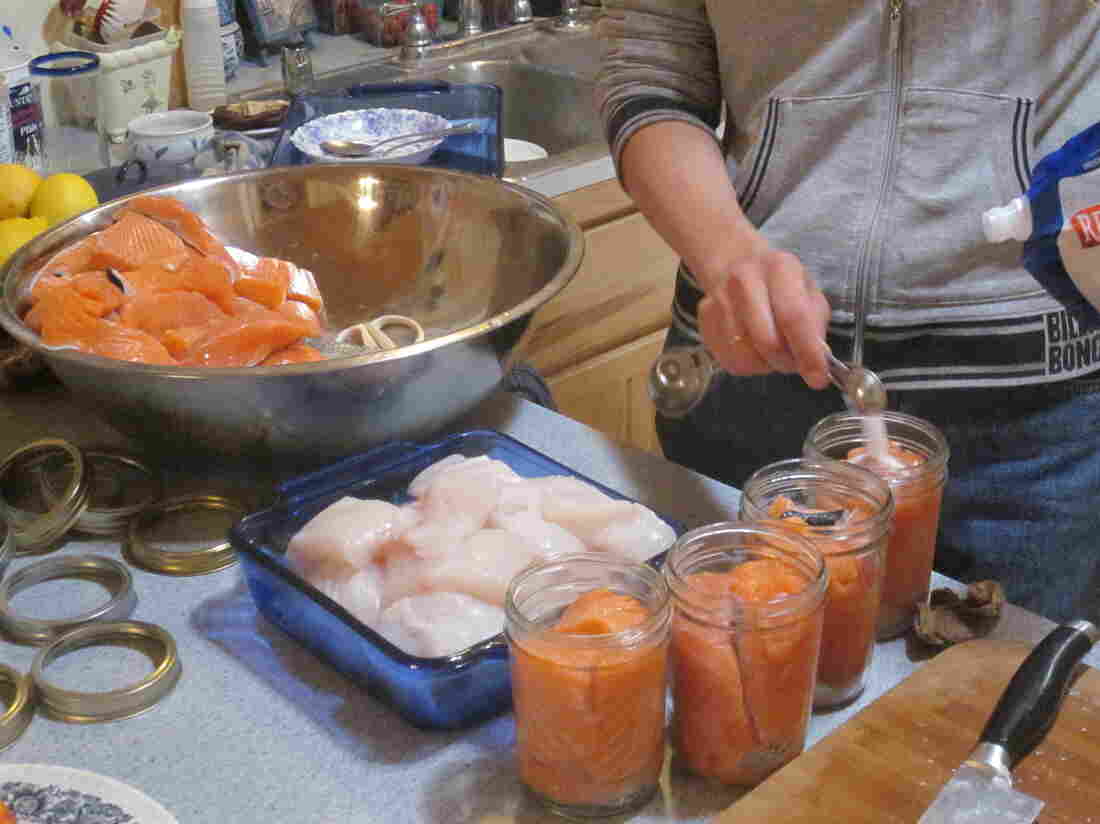 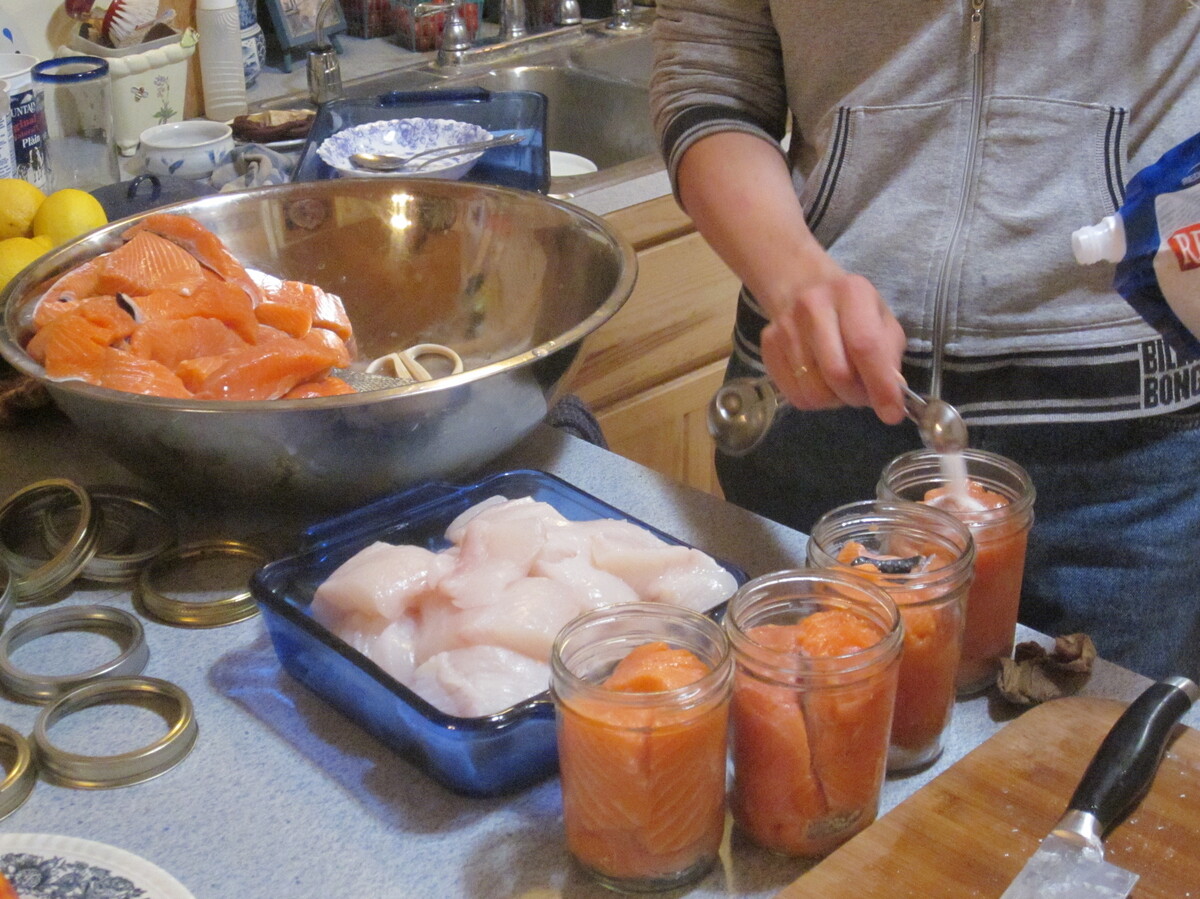 "I still have shells on the floor," she deadpans.

Murphy has at times cooked and jarred black bear. She says bear meat can cause flatulence but otherwise is delicious.

"You can render down the oil, too," she says. "I fry shrimp in it, and you'd swear it was olive oil."

Vegetarians — if any exist on and around Prince of Wales Island — may also find themselves in a land of plenty here. Many of the local fruits and veggies are seasonal. But locals can make sea asparagus, kelp, fiddlehead ferns, spruce tips, wild mushrooms, huckleberries and salmonberries last all year by boiling jars full of these and other goodies in giant stove-top pressure cookers, which cause the containers to vacuum seal as they cool.

Of course, such foods can also be dried or frozen, but canning offers unique benefits. The foods can last years without deteriorating or developing freezer burn, and they are ready to eat upon opening. And on an island where a latte costs $6, a fresh watermelon $15, and a can of salmon $10, residents may pinch pennies when they're able and can their own foods to save on the cost of a freezer.

For most locals, the canning season begins in the spring, when the mighty Chinook — the biggest, greasiest and most succulent of the salmon clan — swarm local coves and seaward channels. In June and July, 3- to 5-pound pink salmon arrive by the millions, gathering in schools near shore before surging up almost every river, stream, brook and crick (outsiders say "creek") to spawn. Sockeye salmon, chum salmon and Coho salmon arrive in succeeding waves. 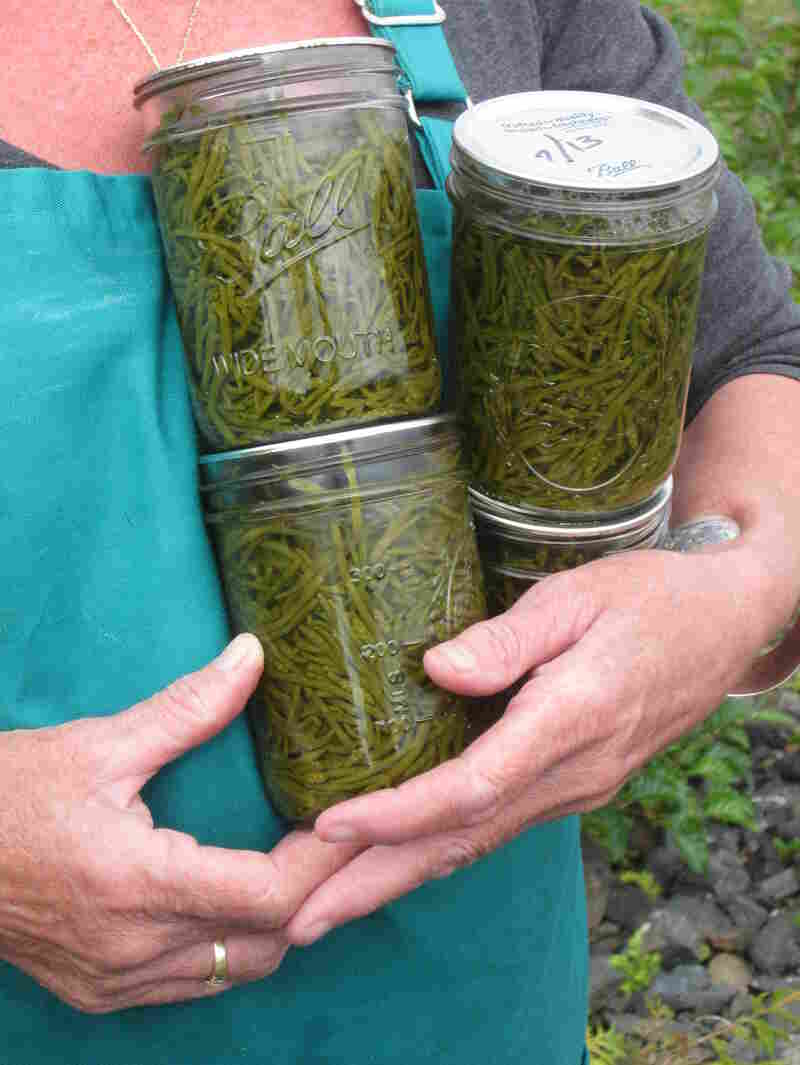 Mary Anna Murphy, one of only two year-round residents on Wadleigh Island, holds jars of sea asparagus she canned.

Sitka black-tailed deer can be hunted several months of the year, and state law allows residents to take four annually. Mushrooms like porcini, chanterelles and shaggy manes burst from the mossy rainforest floor in late summer. Coral-like sulfur shelf mushrooms, called chicken-of-the-forest by islanders, balloon out of tree trunks and stumps in the fall. Kelp thrives in the almost everlasting sunlight of summer.

All the while, countless mason jars make their own migrations within the small communities of Prince of Wales, cycling repeatedly from sink to pressure cooker to pantry, and back again. Lids cannot be reused, and islanders know where the best deals can be found on canning accessories.

In South Thorne Bay, on the northeast side of the island, Tony and Jenny Wise own an idyllic home and garden on a hillside, replete with goats, chickens, veggies and one of the loneliest apple trees in the world. Like so many Prince of Wales residents, the Wises pack away almost countless jars of edibles for storage each year. They use a model 921 All American pressure cooker, which can fit 16 one-pint jars at once.

The total time it takes to jar fish is about three hours, including 120 minutes of high-pressure cooking. Jenny adds nothing to a jar of salmon except salt.

"That way, you can do whatever you want with it when you open it," she says. The Wises often eat jarred salmon with mayonnaise and bull kelp relish — another popular item in the stocked pantries of Prince of Wales Island.

But even local subsistence hunters and gatherers may answer to the temptation of modern foods.