Accessibility links
Where In The World Are There No McDonald's? : The Salt McDonald's may seem to be everywhere, but there are still 105 countries without the fast food giant, from Ghana to Jamaica to Yemen to Tajikistan. In six countries, McDonald's once had a presence, but due to economics, and sometimes politics, the franchises closed.

Where In The World Are There No McDonald's?

Where In The World Are There No McDonald's? 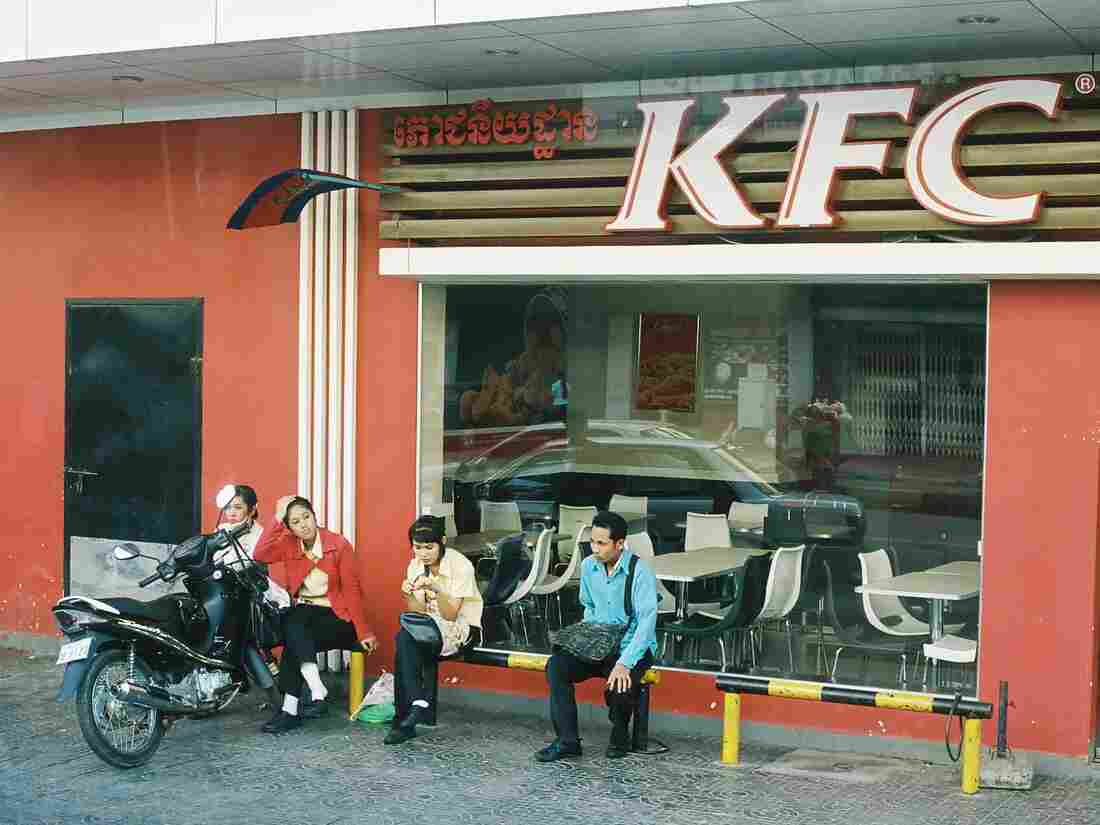 Countries like Cambodia still have yet to gain their own McDonald's franchise, but other American fast food chains, like KFC, have done well here. bo.peter/via Flickr hide caption 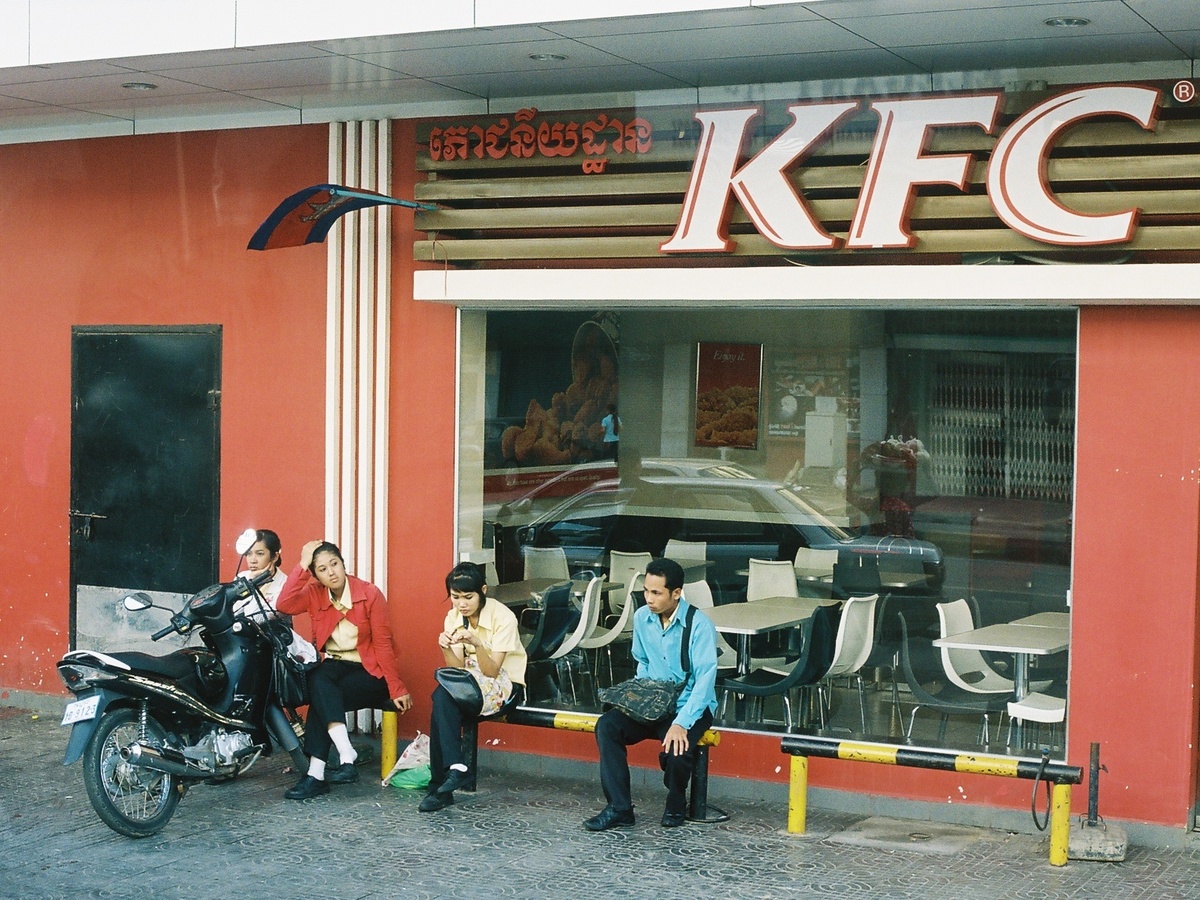 Countries like Cambodia still have yet to gain their own McDonald's franchise, but other American fast food chains, like KFC, have done well here.

Recent news out of Vietnam intrigued us here at The Salt. Ho Chi Minh City is set to get its first McDonald's sometime in the next year, according to the company.

It seems Vietnam is ready for the iconic American food, and McDonald's is confident that Vietnamese consumers now have enough disposable income to get hooked on shakes, burgers and fries.

That got us thinking about the global reach of one of the world's most iconic food companies. 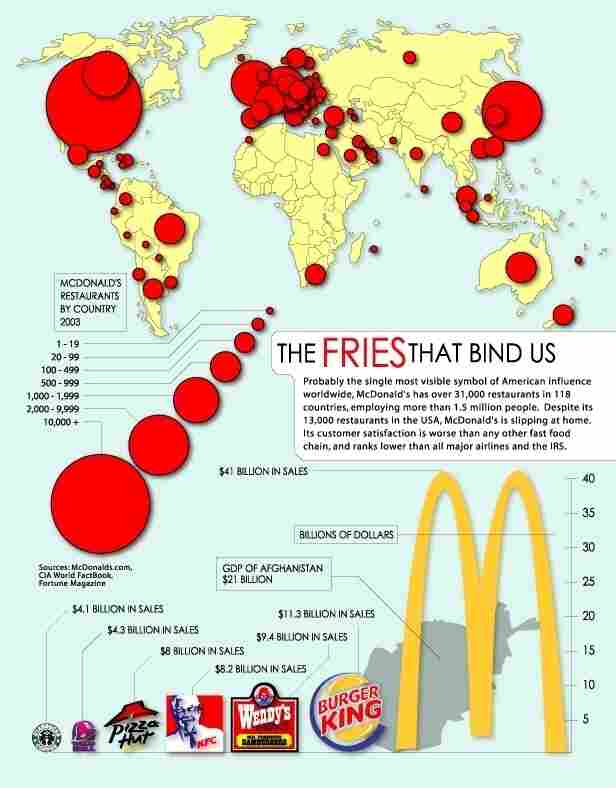 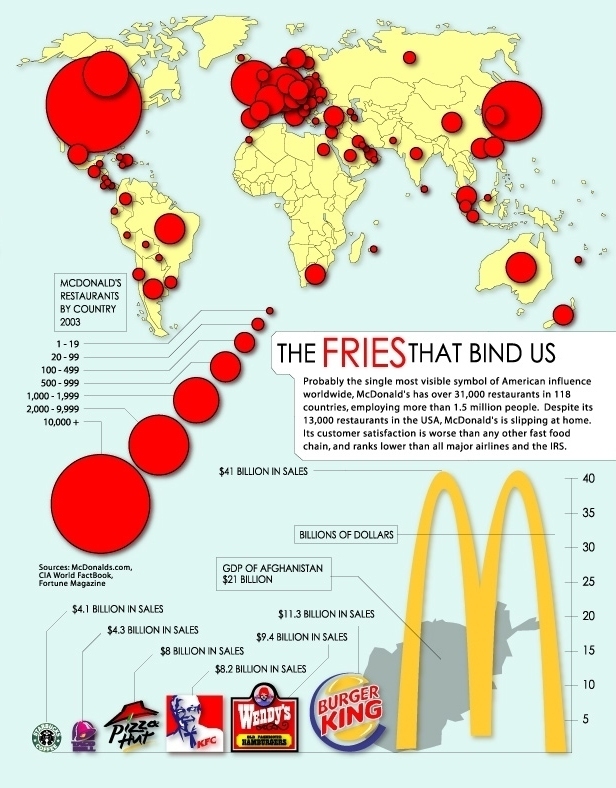 McDonald's may seem to be everywhere, but there are still 105 countries without the fast food giant, from Ghana to Jamaica to Yemen to Tajikistan. And in six countries, McDonald's once had a presence, but due to economics, and sometimes politics, the franchises closed.

"Two-thirds of their total revenue is outside of the U.S.," Russo says.

The company has 34,480 restaurants in 119 countries, including Cuba and France, where it's especially beloved, even by foreigners.

You won't find a Big Mac if you visit the Vatican City. And if you are one of the rare foreigners to make it inside North Korea, you won't find one there, either.

Miguel Centeno is a sociologist at Princeton University. He was part of a team that created maps to track globalization; one of them is called "The Fries That Bind Us," a colorful look at McDonald's and its reach worldwide.

"If you want a definition of what the rich world and the poor world are, well, if you can get a McDonald's, you are in the rich world," Centeno told The Salt. "If you look at where these restaurants are located, it doesn't map on to culture; it maps on to money."

It also sometimes maps onto politics. One of the most recent closures this May was in Macedonia after disputes between a franchisee and the American headquarters. And in the case of Bolivia, the government said they'd rather not have fries with that in 2002, when all McDonald's franchises there were closed.

Just listen to Bolivian President Evo Morales talk about his lack of love for fast food, and you might begin to understand. He recently railed against Western fast food chains during a speech in February:

"The major multinational food companies seek to control the production of food and to dominate global markets by imposing their customs and foods. The only goal of such producers is to generate profits. So they standardize food and drinks, turning them into global foods produced on a massive scale with the same formula. They are not interested in the health of human beings, only in their earnings and corporate profits."

But as Tanya Kerssen, a food policy analyst with the Institute for Food and Development Policy tells The Salt, Bolivians eat fast food, too.

No McDonald's In These Locales

Here are a few countries out of the 105 in the world where you won't find McDonald's fries or burgers.

* Denotes countries that have had at least one McDonald's restaurant, since closed.

"Many people have suggested that Bolivians rejected McDonald's out of a cultural preference for traditional, healthy, local and 'slow' foods," Kerssen says. "But a beloved snack is the salchipapa — french fries topped with slices of hot dog, slathered in ketchup and mayonnaise. Most Bolivians, as far as I can tell, love burgers and fries."

In the isolated island nation of Iceland, their McDonald's departure had more to do with economics.

Jon Gardar Ogmundsson owned what was one of only three McDonald's restaurants in the country for about six years before he had to shut his doors after 18 months of financial struggle in 2009.

"When we were importing goods, it was doubling and tripling in price," he says. "We always thought in Iceland our currency would recover, but it hasn't, even until today."

People stopped buying burgers at his McDonald's franchise. But the financial crisis didn't keep him out of the burger game. Now, he owns a locally sourced "green line" fast food restaurant called Metro.

And, Ogmundsson says, with his newfound ability to price his products as he chooses, and offer more health-conscious meals for discerning Icelanders, Metro "is actually doing quite well."