Accessibility links
Is The Way To Tech Workers' Loyalty Through Their Stomachs? : The Salt Google's extensive and delectable food offerings have long been part of the company's perks. Now startups in other cities are hiring chefs who prepare fresh, creative food to attract and keep top talent. 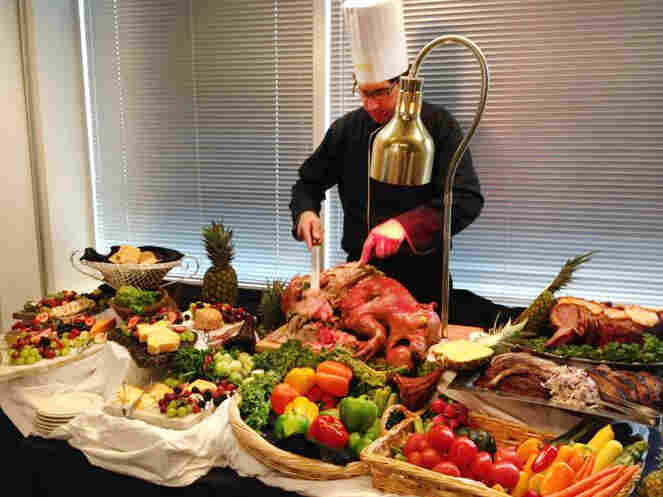 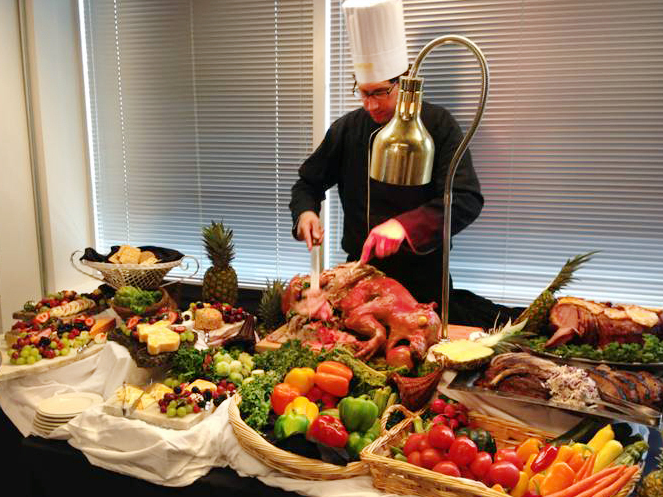 Ari Dvorin was hired in May as the first corporate chef at SpareFoot, a startup in Austin, Texas. Here, Dvorin cuts suckling pig for a mockumentary SpareFoot made.

The dazzling array of food options at the Googleplex campus in Mountain View, Calif. — 25 cafes at last count — is the much-cited example of tech world food perks. And you can peruse the menus at Airbnb and Facebook to get a taste of an equally high bar for not just free food, but worldly food that is designed to delight and fuel employees to work better and harder.

The envy-inducing dishes Facebook's culinary team recently served up include hazelnut peach cheesecake and house-smoked buffalo quail with buttermilk blue cheese. Over at Zynga, employees are spoiled with pickles, yogurt, beef jerky, beer, kombucha and bread — all house made. That's just the tip of the spread prepared by executive chef Matthew DuTrumble and team.

J Sider, founder and CEO of BandPage, a music platform startup in San Francisco, says that when people come for an interview he shows them the BandPage food program and introduces them to corporate chef Callie Waldman. "They walk in the office, which is pretty open, and they can see and smell her foods being made," Sider tells The Salt. "Sometimes she'll put out fresh cookies or granola bars."

The corporate chef trend may have started in California, but it's now spreading to other cities with startups that are competing with each other for engineers, product developers and sales mavens. They're going way beyond fresh doughnuts, as Grub Street's recent list of the best food and drink perks at New York startups shows.

Take SpareFoot, a fast-growing company in Austin, Texas, that's an online marketplace for consumers to find and reserve self-storage units.

"I had heard about Silicon Valley companies having chefs, yes, but more recently many Austin tech startups were doing it, too," Chuck Gordon, founder and CEO of SpareFoot, tells The Salt in an email. "I got a chance to check some of those out and figured we could probably pull off something pretty great at SpareFoot."

In May, after several months of searching, SpareFoot hired Ari Dvorin, who had been the head chef at Facebook's Austin office and also ran his own catering company. Before Dvorin came on board, SpareFoot's 90 employees could count on the company to buy tacos on Mondays and keep a snack shelf fully stocked. But otherwise, it was basically "fend for yourself," says Dvorin.

Rachel Greenfield, a marketing manager who's been with SpareFoot for 2 1/2 years, says she used to go out for lunch, but got burned out on the nearby options. Now that Dvorin cooks lunch every day for her and her colleagues, Greenfield says, "lunch has become a fun social moment, a gathering space with a lot of intermingling. It reminds me of school lunch, except that we're all beyond the clique part. People don't linger too long — they want to get back to work, so it's very time-efficient for us." 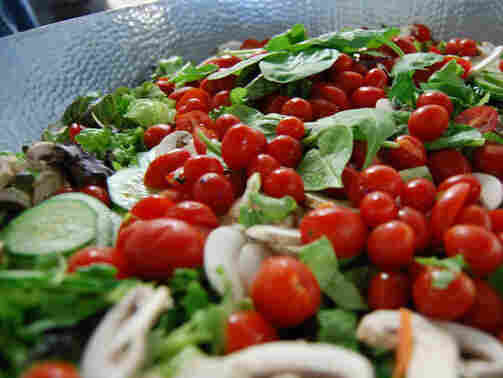 One of Dvorin's salads, which he prepares daily for SpareFoot's 90 employees. Jenny Zhang/Courtesy of SpareFoot hide caption 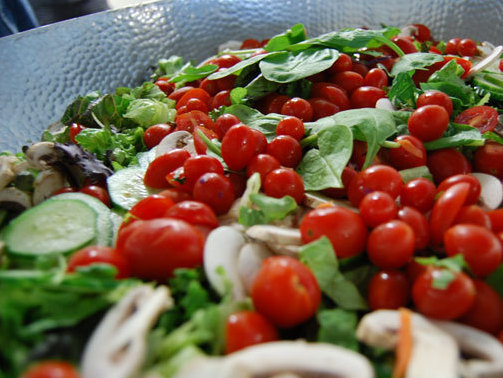 One of Dvorin's salads, which he prepares daily for SpareFoot's 90 employees.

When SpareFoot moved into its current space, it had no need for a chef or a kitchen. So Dvorin has to cook the lunch early in the morning at a kitchen he rents across town and transports it to the office, where he has a small space with an oven to finish cooking.

It's tough work to get the timing right, especially since the menu changes every day for two months, he says. But he far prefers it to working in a restaurant, where "the menu was the same and you are stuck working in a 4-by-4 foot area."

Like a lot of tech startup chefs, Dvorin is big on themes. On Monday, he serves comfort food, then it's Taco Tuesday and International Wednesday. And every day there are fresh salads and vegetarian options. "Everyone is so appreciative of the food and dining experience," he says.

That's exactly what the CEOs hope to get out of investing in a chef who caters directly to employees. According to Sider of BandPage, food programs drive a lot of value to tech companies.

"What we've seen is that it's certainly worth the cost; the chef and the food program yield productivity, stronger culture, stronger community," he says. "We can really see the benefits." Eating together every day, he says, is a team building exercise: "Instead of doing trust falls we have a chef."

Young chefs coming out of the top culinary schools also seem to be drawn to these new opportunities, according to Jan Smith, spokeswoman for the Culinary Institute of America. "We have had a steady flow of externs at Google, and ... at least one grad who worked at Facebook," she says.

"It's really important to me that I'm able to cook a variety of meals so that the employees don't feel as if they're eating at the same restaurant every day," she says. "The challenge ... of constant innovation feeds my creative side and keeps things interesting for everyone, myself included." Recently, that meant playing around with variations on Taco Tuesday: Japanese sushi tacos and Indian-style tikka masala tacos.

And, Waldman adds, it's a lot more rewarding to cook for colleagues whom you know and respect.

"I couldn't imagine switching to the restaurant industry, cooking from the same menu every day where meals go through the double doors having no idea who's on the other side."