Accessibility links
Fast-Food Strikers Demand A 'Living Wage' : The Salt Picketers in seven cities say McDonald's, Wendy's and other fast-food chains should pay employees $15 an hour. But the restaurant industry says that would force those companies to cut jobs. 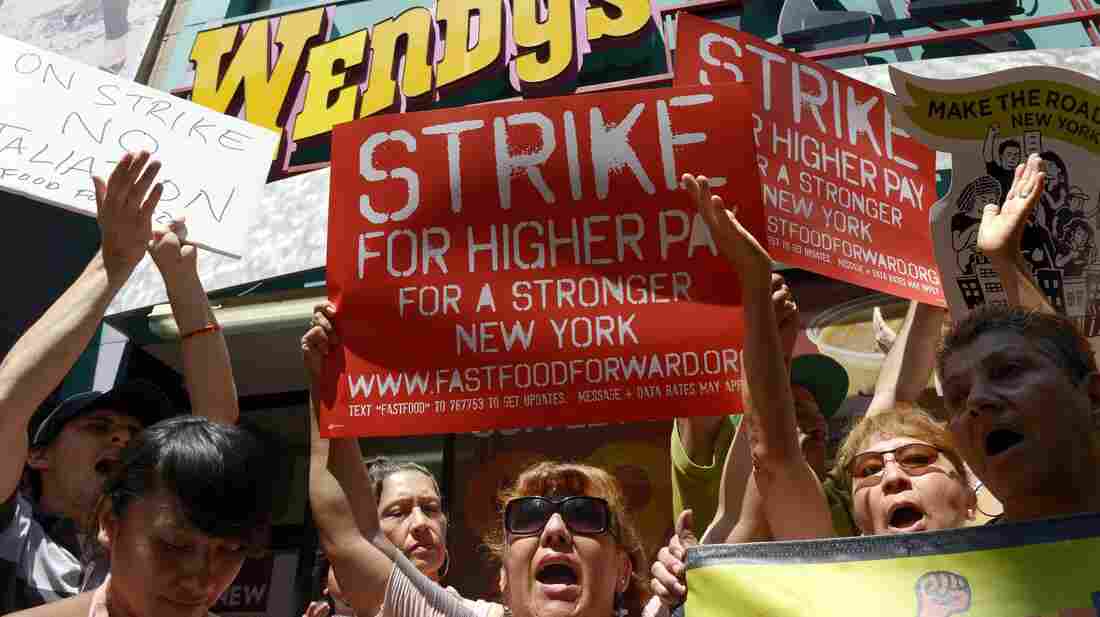 People gathered outside a Wendy's restaurant in New York City on Monday as part of a one-day strike calling for higher wages for fast-food workers. Justin Lane/EPA/Landov hide caption

At a Wendy's restaurant in Lower Manhattan on Monday, protesters urged the lunchtime crowd to skip the Value Menu for one day. They blocked the sidewalk and half of the street.

Shanell Young held a red strike sign over her head. Young earns the minimum wage, $7.25 an hour, at another Wendy's in New York. She says that's not enough to support her and her 5-year-old son.

"It's horrible," says Young. "Everything goes up. It's unfair. You can't find an apartment. You can't pay for children's school uniforms. Everything is unfair. We can't live off this."

Fast-food workers are walking picket lines across the country this week. They're staging a series of one-day strikes in seven cities, including New York, Chicago and St. Louis. The campaign is aimed at pressuring McDonald's, Wendy's and other fast-food chains to pay a so-called living wage of $15 an hour.

The walkout at the Wendy's in Lower Manhattan did not force the restaurant to close, although it did seem to persuade a few potential diners to go somewhere else.

Wendy's would not give an interview for this story. Nor would any of the other fast-food chains targeted in the strike. But the National Restaurant Association did. Spokesman Scott DeFife says profit margins in the restaurant business are typically tight — and labor costs are among the industry's biggest expenses.

"There would be a severe impact on the ability to create jobs if the minimum wage was doubling to $15," says DeFife.

Michael Saltsman, research director at the EPI, says a higher minimum wage could push fast-food companies to invest more heavily in automation instead of hourly workers.

"There are a number of chains here in the U.S. who are experimenting with electronic menus where you can order on an iPad-type device; you can pay on that device," says Saltsman. "These are changes that happen in direct response to higher labor costs."

Critics of raising the minimum wage say it might also affect the kind of people who can get hired. Diana Furchtgott-Roth, a fellow at the Manhattan Institute and a former chief economist at the Department of Labor, says many of the people making the minimum wage are teenagers or other part-time, entry-level workers.

But these arguments haven't convinced the protesters in New York. And they haven't persuaded Rep. Jerrold Nadler, D-N.Y., who stopped by to encourage the picketers outside the Wendy's in his district.

"The history is every time that there's been a debate over raising the minimum wage, people have said this'll cost jobs," says Nadler. "It has never happened. If they pay a higher wage, they'll make a slightly smaller profit margin. They're making huge profits now."

The fast-food protests continue this week with walkouts scheduled in Chicago, Milwaukee, Flint, Mich., and Detroit.