Accessibility links
Bringing Home The Woolly Bacon From Hungary : The Salt The Mangalitsa pig was born out of a 19th-century Austro-Hungarian experiment in cross breeding, with a wild boar and a lard pig. In the past few years the succulent pork has gained devotees in the U.S., too. 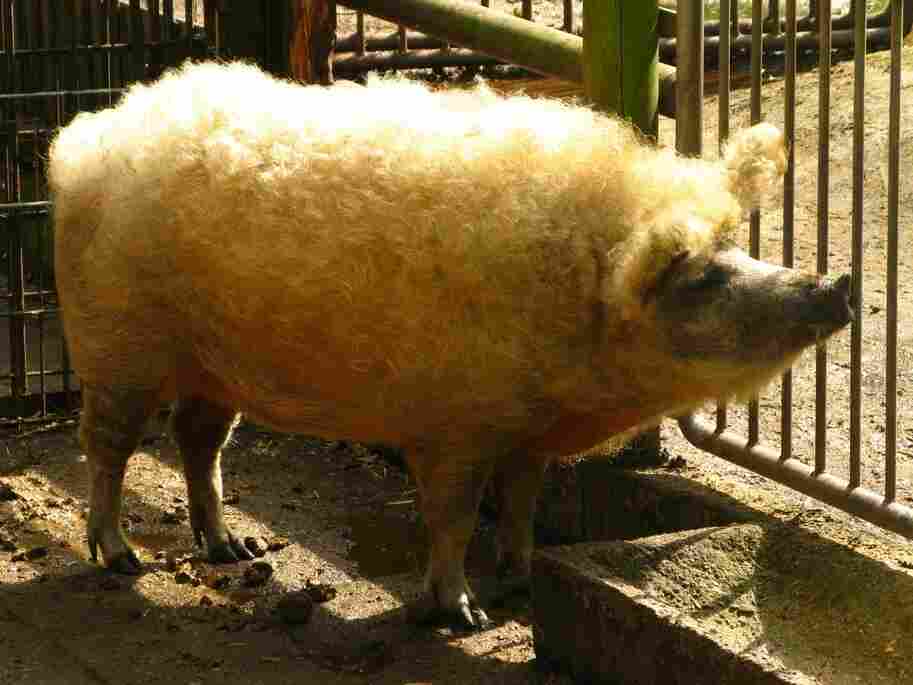 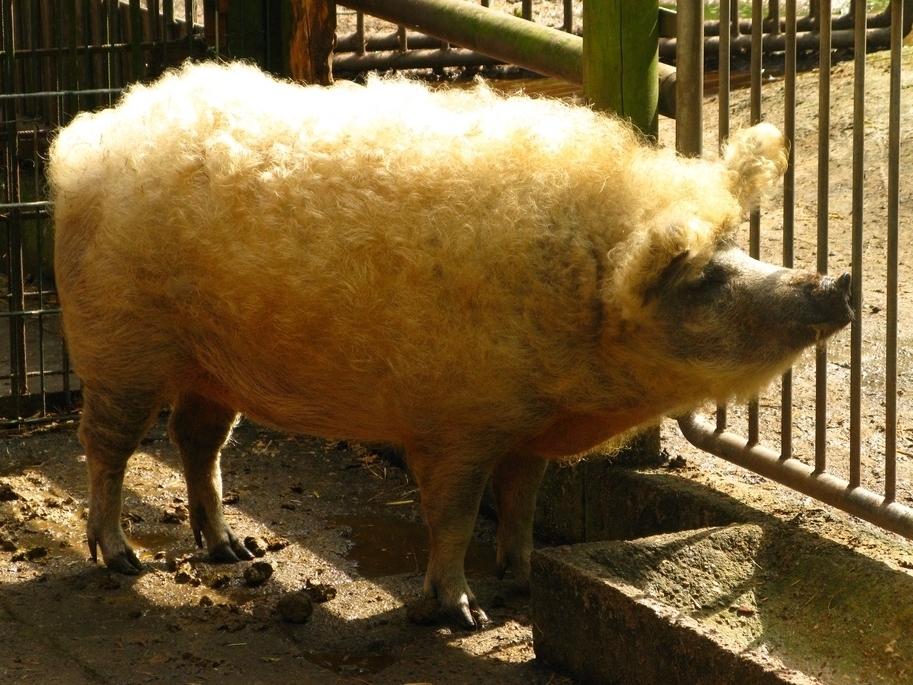 On a cold February evening in Budapest a few years ago, I was invited to go to a small festival on the edge of the city's main park. There, I was told, I would eat pig.

This was not unusual: In Hungary, the word for barbecue, szalonnasütés, means bacon cooking, whereby a piece of bacon is held over an open fire as the fat drips onto an awaiting slice of bread.

But this pork came from pigs unlike any others I knew. They were big, fat and curly haired. These were Mangalicas, or Mangalitsas in English. They have paunchy bodies covered in tight curls, like the product of a hog and sheep romance. And, as I learned upon biting into my homemade sausage at the festival, they are delicious.

The Mangalitsa pig was born out of a 19th-century Austro-Hungarian experiment in cross breeding with a wild boar and a pig bred especially for lard. The result was one of the fattiest, tastiest and strangest-looking pigs around.

The meat is a luscious red, more akin to beef than pork. It's 50-percent fat content gives it a coveted marble and buttery flavor. They've been nicknamed woolly pigs and curly haired hogs for their blonde, red or black locks. 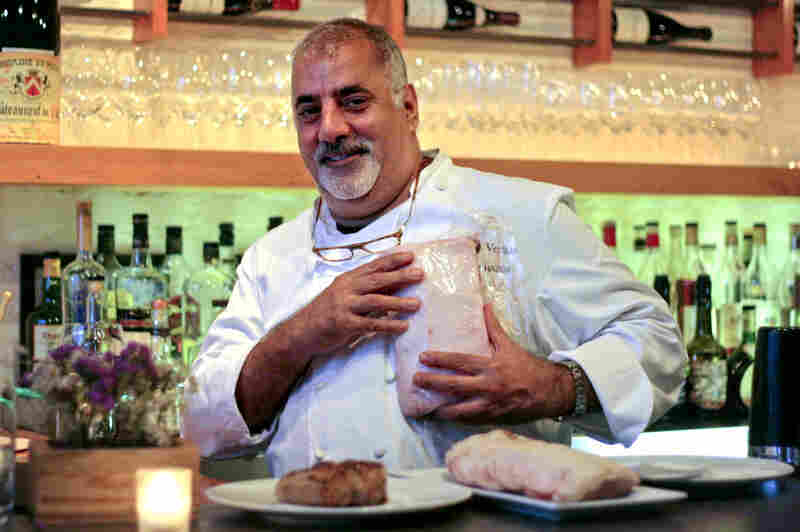 Sam Hazen, executive chef at Veritas in New York, with a fatty Mangalitsa sirloin. Hazen says the pork is the best he has tasted. Adee Braun /for NPR hide caption 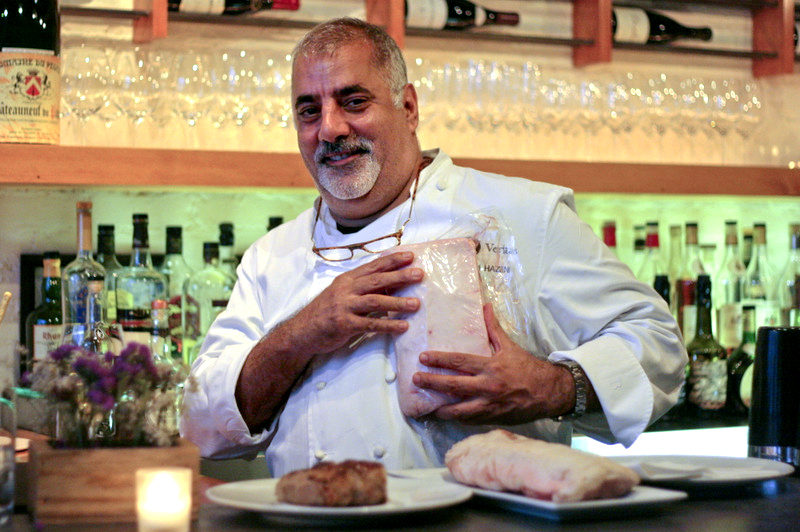 Sam Hazen, executive chef at Veritas in New York, with a fatty Mangalitsa sirloin. Hazen says the pork is the best he has tasted.

The breed nearly died out during the push for leaner and faster growing hogs. But in the early the 1990s it was revived by a Hungarian breeder. Today there are 60,000 purebred Mangalitsas worldwide, with about 50,000 in Hungary.

In the past few years the succulent pork has gained devotees in the U.S. as well.

Charles Krausche, owner of the Mangalitsa Ranch in upstate New York, got the woolly pig fever after reading a 2010 New York Times article about the breed. "I walked around with it my head for a while," says Krausche, a practicing lawyer who had been considering starting his own farm.

He tracked down some pork shoulder and made a Mangalitsa feast with his friends. "That dinner sealed the deal," Krausche says. Today he raises his Mangalitsas at two farms in the Catskills and sells to a few restaurants and specialty stores in the region. He's one of a small band of Mangalitsa farmers sprinkled across the country.

Others may be hestitating because Mangalitsas are even more expensive to produce than other heritage breeds such as Berkshire and Ibérico pigs. They take a long time to grow to a hefty 300 to 350 pounds — about one year, versus six months for most commercial breeds. As they grow, the pigs roam around munching on acorns and shrubs and then produce 5 to 8 piglets per litter.

Still, some are willing to pay the price. Mangalitsa pork has been featured on the menus of such exalted eateries as The French Laundry and Blue Hill. "For me, it's the best pork in the world," says Sam Hazen, executive chef at Veritas in New York, who uses only Mangalitsa for his pork dishes. "It's got incredible texture and it's consistent; it's never dry. It's very, very special."

Chefs are also easily excited by the other 50 percent of the animal — pure unprocessed fat. As Nancy Shute reported in 2012, lard is making a steady comeback in many larders.

Mangalitsa lard is no Crisco, as evangelists will tell you. "Chefs have always known that fat equals flavor," says Michael Clampffer, a Culinary Institute of America graduate and vice president and resident chef of Mosefund Farm.

The New Jersey farm has been selling their free range Mangalitsas to mostly local high-end restaurants since 2009, including Aquavit and Veritas. "There is a push to use good quality lard and today chefs and customers are a little more open to using it," says Clampffer, who claims that the only way he can get his own kids to eat broccoli is by braising it in lard. "If I use olive oil they won't eat it."

Mosefund is close to getting a Mangalitsa Breeders Association off the ground so that the heritage breed can get its official U.S. Department of Agriculture certification.

Back in Hungary, the little Mangalitsa festival has since outgrown its old location and moved to the city center.

The pork is still hard to come by in the U.S. outside of some specialty stores, farmers markets and top-end restaurants. But if the Mangalitsa evangelizers get their way, more Americans will get a taste of the fatty, woolly pig.

Adee Braun is a freelance writer in New York City.