Accessibility links
Long Awaited Lab-Grown Burger Is Unveiled In London : The Salt Rarely has a single food gotten such star treatment as the hamburger that made its debut in London on Monday. But the burger — grown from stem cells taken from a cow — represents a technology potentially so disruptive that it has attracted the support of Google co-founder Sergei Brin. 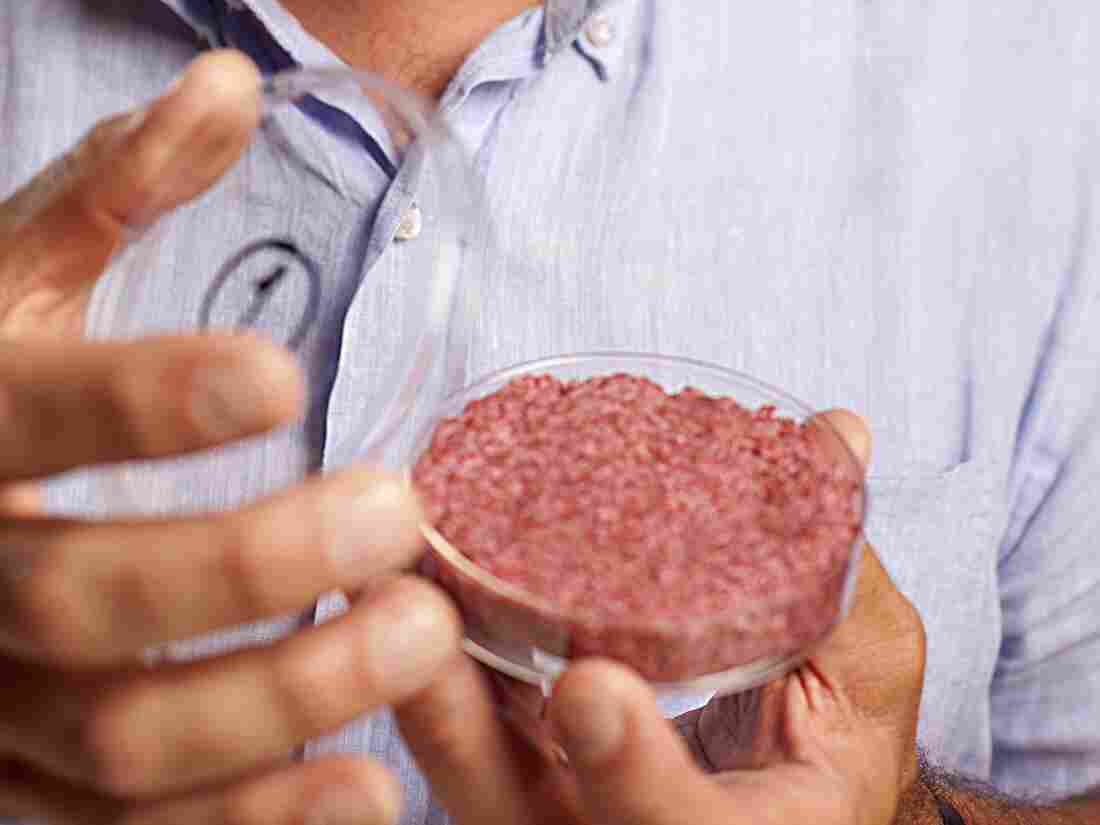 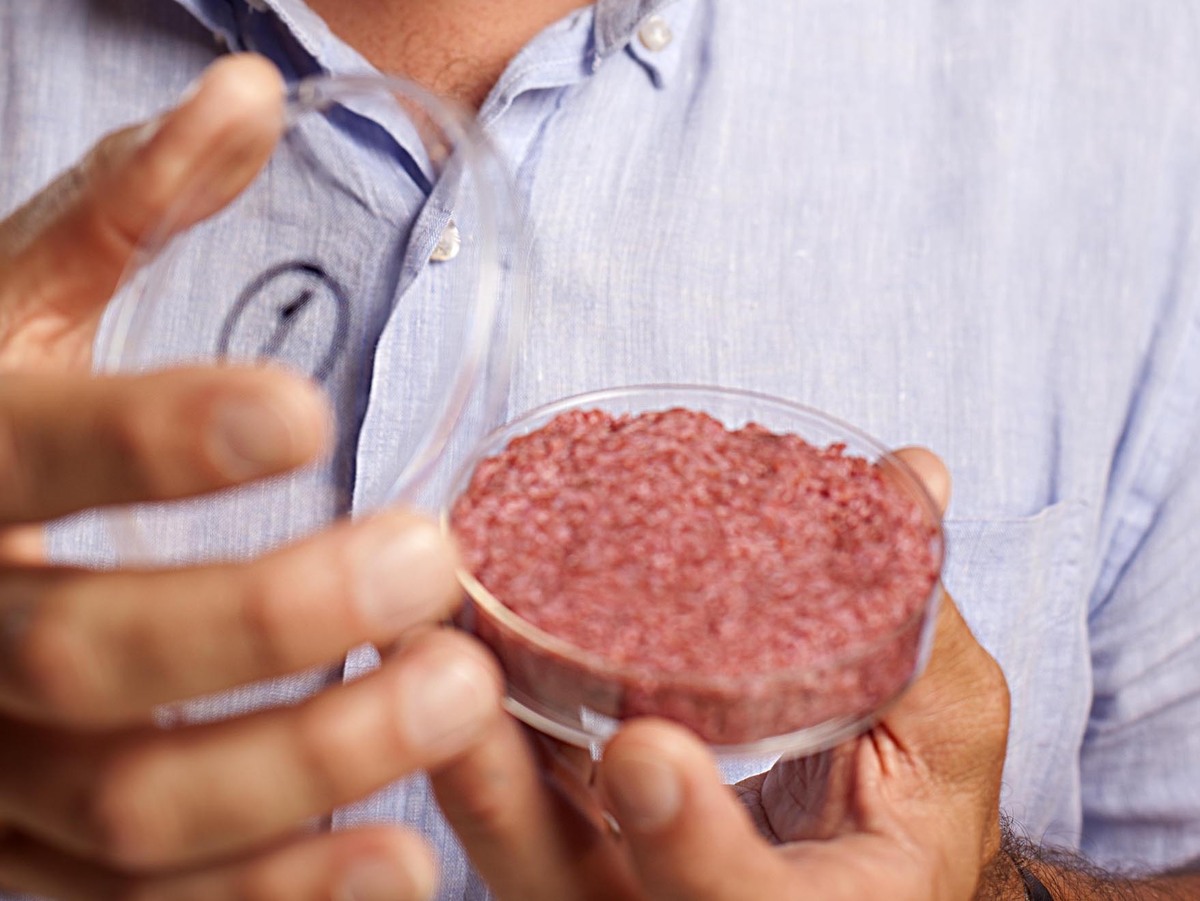 The burger developed by Professor Mark Post of Maastricht University in the Netherlands.

After three months, $330,000 and a high-profile media blitz, the world's first hamburger grown in a lab made its worldwide debut Monday.

The unveiling of "cultured beef," as the burger is branded, was a production worthy of the Food Network era, complete with chatty host, live-streamed video, hand-picked taste testers, a top London chef and an eager audience (made up mostly of journalists). Rarely has a single food gotten such star treatment.

But this was no ordinary food launch, of course. The burger, which began as just a few stem cells extracted from a cow's shoulder, represents a technology potentially so disruptive that it has attracted the support of Google co-founder Sergei Brin.

"Sometimes a new technology comes along and it has the capability to transform how we view the world," Brin says in a promotional video released Monday, the same day he was unmasked as the anonymous donor who ponied up money to grow the burger.

It took three months to culture the 20,000 individual muscle fibers that make up one single patty. But the technology behind this burger builds upon a decade of research by Dutch scientists, who applied some of the same techniques used to develop artificial livers and windpipes. In the last few years, Mark Post, a vascular physiologist at Maastricht University in the Netherlands, has taken the lead. And it was Post who presented the burger at the launch event. 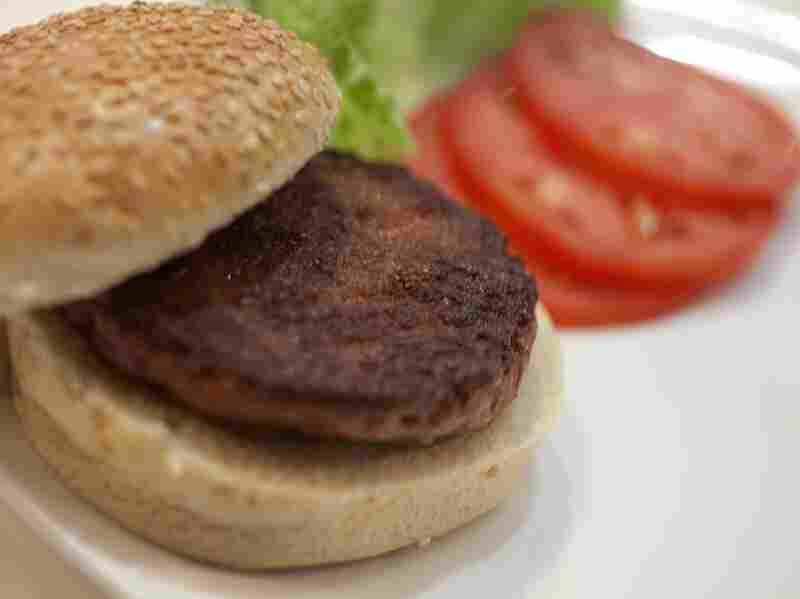 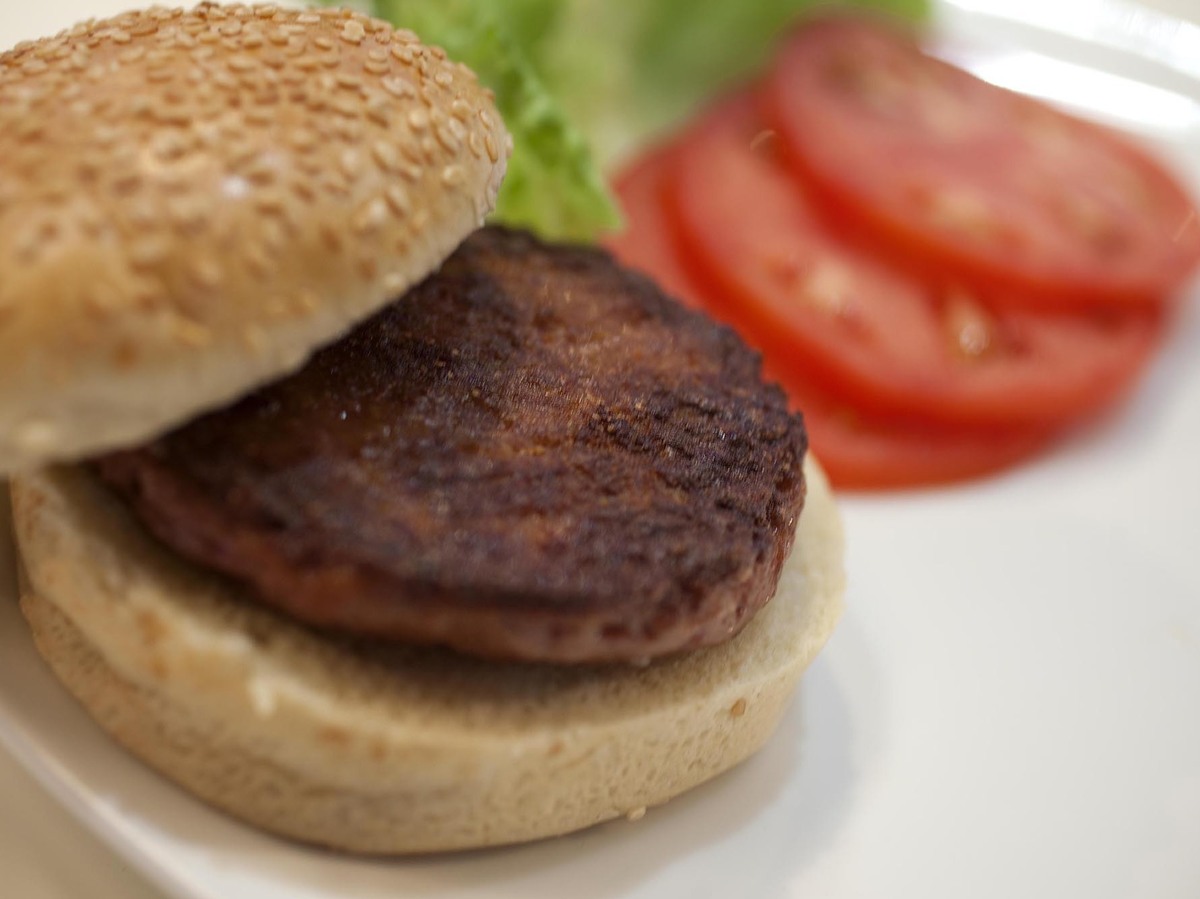 Scientists say commercial production of cultured beef could begin within 10 to 20 years.

The chosen tasters, who appeared to be supportive of the technology, were Austrian food scientist Hanni Rützler and Josh Schonwald, a Chicago-based journalist and author of The Taste of Tomorrow: Dispatches From The Future of Food. No one on stage seemed to see the food before them as "inherently creepy," as New Yorker writer Michael Specter called it on Fresh Air in 2011.

Chef Richard McGeown of London's Couch's Great House Restaurant praised the patty's nice color as he browned it in sunflower oil and butter. It was up to Rützler and Schonwald to describe the taste of this burger, composed entirely of muscle and served without salt, pepper or condiments. The verdict?

"The texture, the mouthfeel has a feel like meat," Schonwald put it. "The absence is ... fat. It's a leanness. But the bite feels like a conventional hamburger. It's kind of an unnatural experience [without condiments]."

Rützler agreed the burger was edible, but not delectable. "It has quite some intense taste, it's close to meat," she said. "I thought it would be softer."

But flavor, at this stage, is almost beside the point.

Monday's demonstration was really more of a proof of concept that meat can indeed be grown in a petri dish. The idea that humans might one day be able to produce large quantities of meat from very few animals is potentially game-changing, especially for those deeply worried about the environmental and animal welfare costs of industrial meat production.

"Our current meat production is at a maximum and it's not going to be sustainable," Post said. "We need to come up with an alternative."

To create his alternative, Post first removed tissue from a cow with a syringe. Then he separated out the stem cells that specifically make new muscle when the cow is injured. He put those stem cells in a growth medium with antibiotics (to prevent contamination from bacteria). Over time, the cells divide, and with the help of some scaffolding provided by the researchers, "the cells will self-organize into muscle fibers," Post explains in the promo video.

This was no small feat. As synthetic biologist Christina Agapakis pointed out in a blog post for Discover in 2012, "Cell culture is one of the most expensive and resource-intensive techniques in modern biology. Keeping the cells warm, healthy, well-fed, and free of contamination takes incredible labor and energy, even when scaled to the 10,000-liter vats that biotech companies use." Hence this burger's hefty pricetag.

And while the technique for growing cow cells avoids animal slaughter, it still requires animal inputs that raise ethical concerns. As Agapakis notes, the burger cells are grown in a medium "supplemented with fetal bovine serum—literally the blood of unborn cows." Post says he is working on a non-animal based growth medium.

It will be a longtime yet before the average consumer gets to sample an in vitro burger. First, Post says he has to bring down the price tag — currently about $31.50 a pound – as well as the time it takes to grow one burger.

"We need to show that we can make it more efficient," he says, "but we think we can have a more affordable price and have this in supermarkets in 10 to 20 years."

For that, Post and his colleagues will need more research funding – they're hoping to attract the interest of food companies. Agapakis is among those who question how scalable the technology can really be.

And there's another major hurdle: Researchers are still figuring out how to grow fat to mix in with the muscle to improve the flavor and texture.

So will an in vitro steak also be on the menu? Post says it's theoretically possible, but even more technically challenging than a burger and not a priority for the moment.

Also not on Post's to-do list: in vitro chicken, pork or fish – he's focusing on replacing conventional beef because it requires more resources than any other meat to produce.

Still, science alone can't address what is possibly the biggest hurdle facing in vitro meat: the perception that food grown in a petri dish is gross.

For now, Post and others are betting that as consumers becomes more aware of meat production practices, they'll be more open to trying an alternative with fewer ethical or environmental strings attached. In vitro meat advocates like to say, "If you visited a slaughterhouse and visited a lab, the cultured meat would be the obvious choice."

And Brin of Google seems to think that some opposition to a new idea is natural, and even encouraging. "If some people don't see this as science fiction, it's probably not transformative enough," he said.

What do you think? Would you try or buy a lab-grown hamburger if you could?