Accessibility links
The Cotton Candy Grape: A Sweet Spin On Designer Fruit : The Salt Grapes that taste like cotton candy? No, it's not a GMO experiment but rather the result of good old-fashioned plant-breeding techniques. One scientist has already brought these sweet treats to the market and hopes our grape choices will one day be as varied as our apple choices. 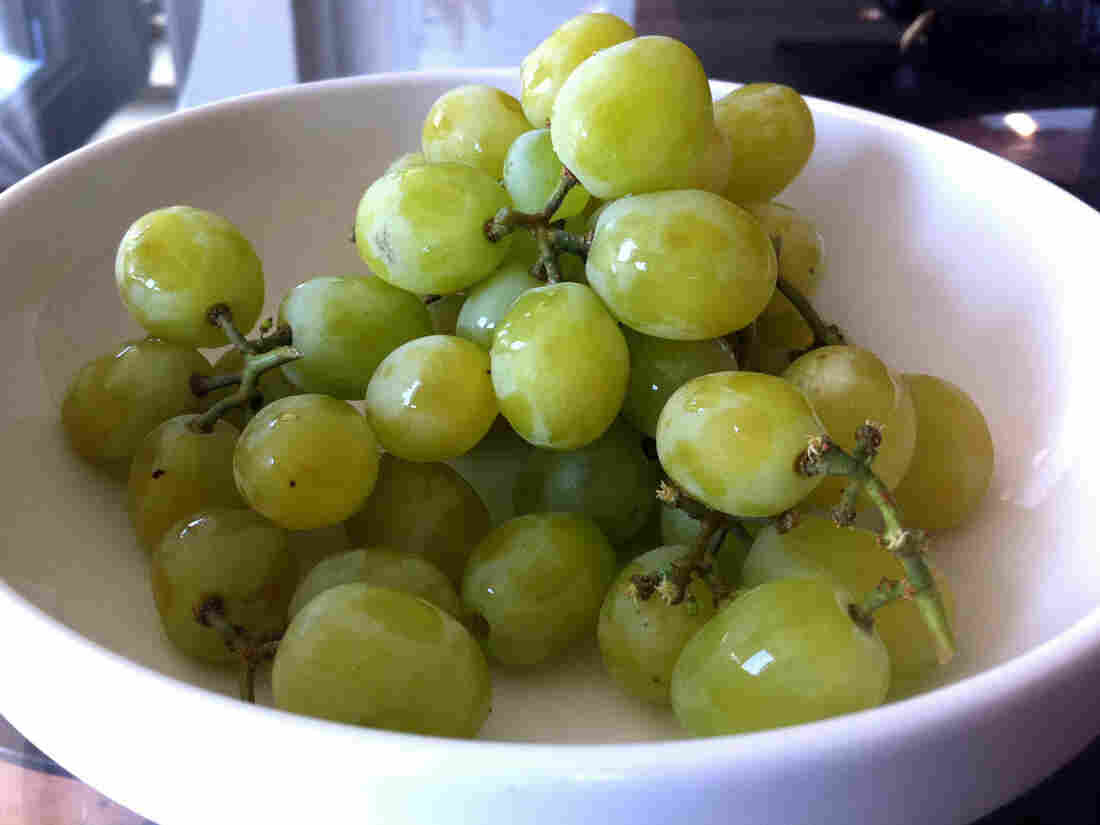 The Cotton Candy grape looks and smells like a regular green grape. But the taste will evoke memories of the circus. Courtesy of Spencer Gray hide caption 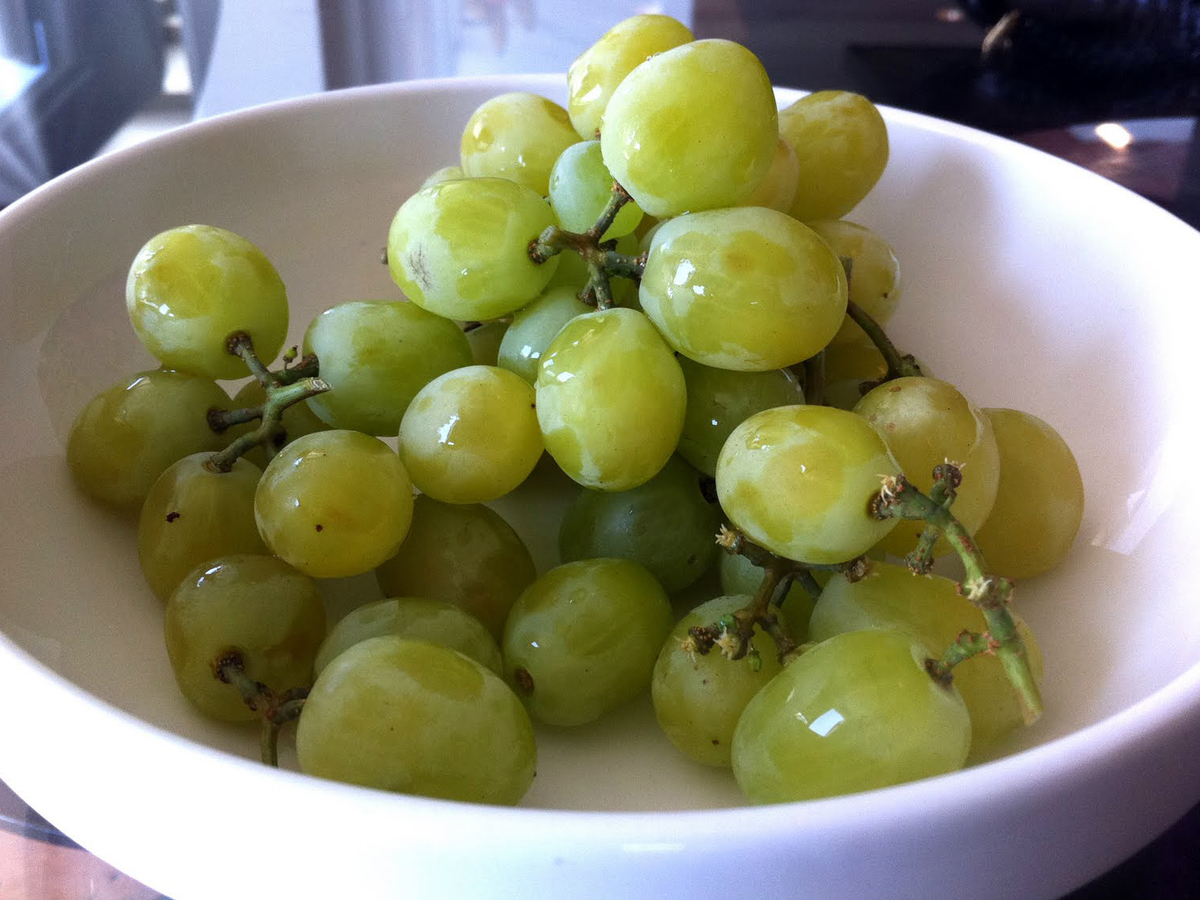 The Cotton Candy grape looks and smells like a regular green grape. But the taste will evoke memories of the circus.

Last year, apple farmers were soaking their fruit in grape flavor to make them more attractive to kids. Now, plant breeders in California have created a grape that tastes like — well, spun sugar and air. 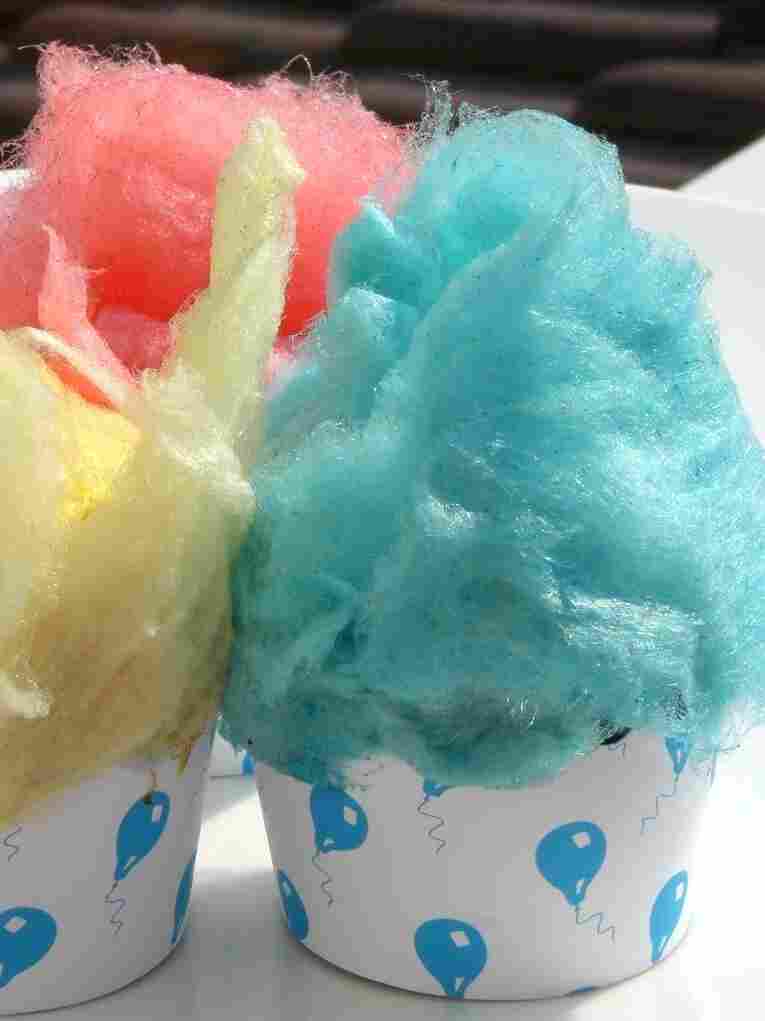 What exactly is cotton candy flavor anyway? Well, the blue is suppose to be raspberry. The yellow is lemon, and that ubiquitous pink puff ball has vanilla in it. seelensturm/Flickr.com hide caption 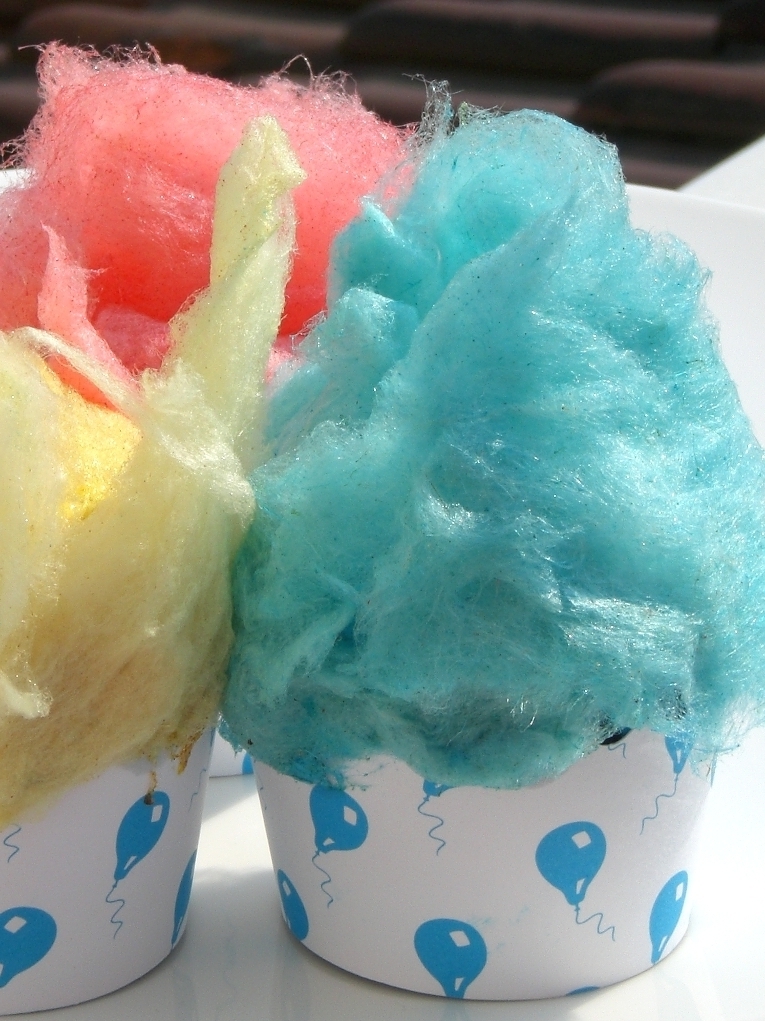 What exactly is cotton candy flavor anyway? Well, the blue is suppose to be raspberry. The yellow is lemon, and that ubiquitous pink puff ball has vanilla in it.

"When it pops in your mouth, the first impression is a rush of cotton candy flavor," says Spencer Gray, a personal chef in Culver City and blogger at Omnivorous who has sampled the grapes. "The green grapes don't look or smell like cotton candy," he tells The Salt, "but they will remind you of a circus." His son, he says, loves them.

At about $6 per pound, this sounds like a lucrative gimmick that takes a perfectly pleasant fruit and jazzes it up into junk food. But when we dug deeper into the grape's origins, we found that its creator is actually trying to do the opposite.

Horticulturalist David Cain wants to bring back the natural flavors of our grapes, which have been stripped away by decades of breeding fruit to withstand shipping and storage — not to please our taste buds.

"When you go to the supermarket, there's like 15 kinds of apples — Fuji, Pink Lady, Gala, Braeburn. The list goes on," Cain tells The Salt. "We want to give consumers the same array of flavors for grapes."

Cain and his team at International Fruit Genetics in Bakersfield, Calif., made the Cotton Candy grape by hybridizing two different grape species. So the designer fruit is actually a hybrid — like pluots, peacharines and cherums.

"We already have other varieties that taste like strawberry, pineapple or mango," he says. "We're still testing those out to see if they're commercial viable."

The Cotton Candy grape has already cleared those hurdles — it has been commercially available in limited quantities since 2011. In fact, sales have been so good that the fruit's distributor, The Grapery, bumped up its production from just two acres to 100 acres this year, with 200 acres planted for 2014. 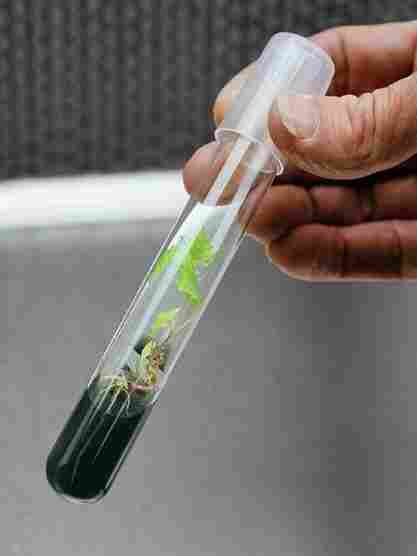 Breeding seedless grapes isn't easy. Scientists have to remove the baby embryos from the plant and grow them in a test tube before later planting them in a field. Courtesy of David Cain/International Fruit Genetics hide caption 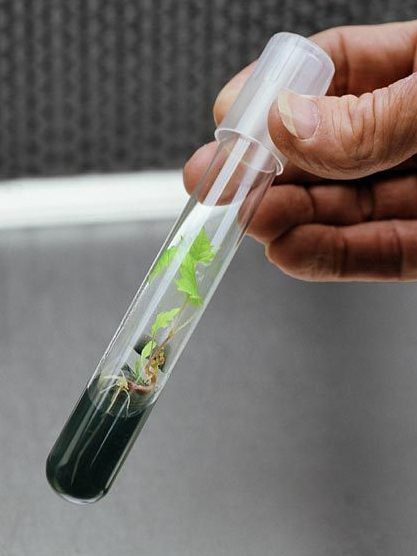 Breeding seedless grapes isn't easy. Scientists have to remove the baby embryos from the plant and grow them in a test tube before later planting them in a field.

Weighing in at about 18 grams of sugar per 100 grams of grapes, the designer fruit isn't cloyingly sweet. It has about 12 percent more sugar than regular table grapes but far less than raisins, which have more than three times the carbs.

So just how do these green grapes conjure up the sensation of spun-sugar melting on your tongue?

The fruit has very little tartness, chef Spencer tells the Salt. "It's like there's nothing to stop the sweetness. It just lingers on your tongue."

There are also hints off vanilla, Spencer says — and vanilla, it seems, is a key flavor in the archetypal "pink" cotton candy that makes your dentist cringe.

To get that vanilla flavor into the table grapes naturally, Cain and his team had to widen the plants' gene pool, mixing in genes from less common grape species.

Almost all of the table grapes in America belong to the species Vitis vinifera. There's nothing wrong with that. V. vinifera is a noble grape. It's used to make all of our wines.

But the world has dozens of grape species, and restricting the fruit in grocery stores to just one species also limits their flavors, Cain says.

Take, for instance, the Concord grape. It's used to make Welch's juices, jams and jellies. The dark-purple berry is packed with exotic flavors and aromas, including one known as "foxy." But the Concord grape has seeds and its skin tends to fall off — not great qualities for a table grape.

So Cain decided to put all the flavors of a Concord-like grape into the firm, crisp and seedless Vitis vineferia by crossing the two species. (He couldn't say exactly which Concord-like grape he used because it's a trade secret).

Breeding seedless grapes isn't easy, because they can't reproduce on their own. After fertilizing the plant, Cain and his team have to take out the baby embryos from the plant, then grow them in individual test tubes in the lab before they ever make it to the field.

Cain painstakingly created around 100,000 of these test tube plants before he stumbled upon the cotton-candy flavored grapes.

"The whole process takes at least six years and sometimes up to 15 years," Cain says. But he thinks it's worth it.

"A lot of fruit becomes tasteless by the time somebody buys it," Cain says. "We want to change that."