Accessibility links
Bring Home The Bacon Or Put It In A Meat Locker? : The Salt If you're suddenly the proud owner of 25 pounds of pork or chicken, your freezer may feel the hurt. So marketers at the Cornell Cooperative Extension in Ithaca, N.Y., are piloting a community meat locker where consumers can store large quantities of meat purchased through meat shares. 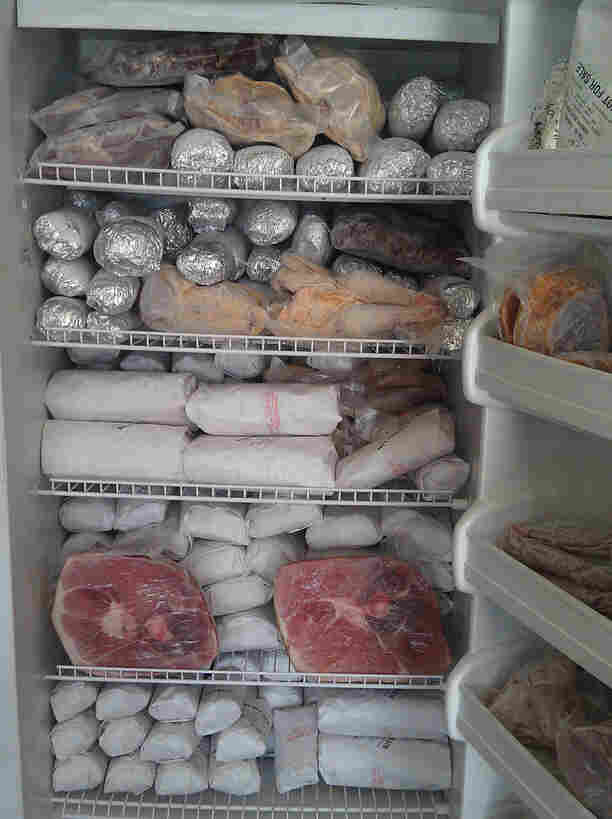 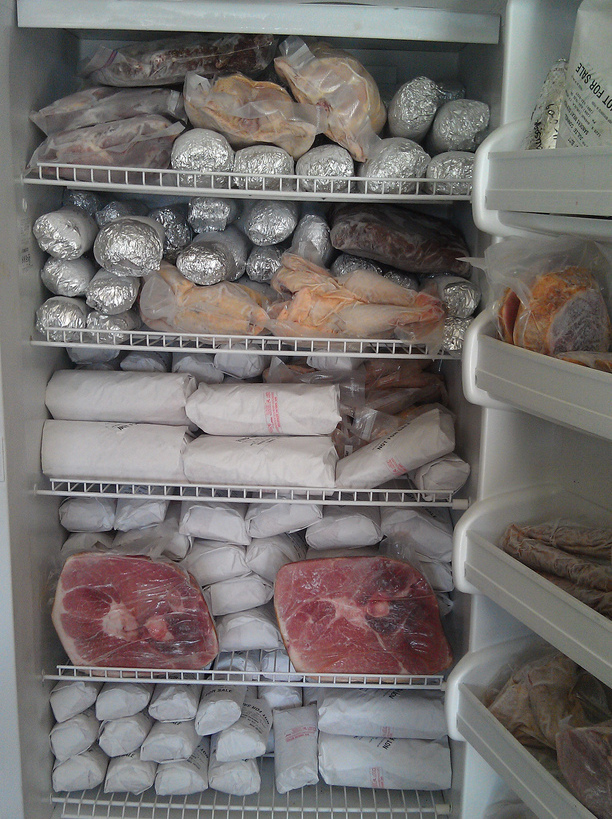 Time for a meat locker? One Flickr user's freezer after purchasing a large share of a pig.

Why buy 1 pound of hamburger meat from a local farmer when you can buy 5 pounds — plus another 20 pounds of stew meat, steaks and roast — for as little as half the price of what it all goes for at the market?

That's part of the logic behind meat shares — plans for buying meat in bulk that are cropping up around the country. Farmers are keen on these schemes, similar to meat CSAs, because it gives them the chance to sell whole, half and quarter animals (broken down into individual cuts). Selling this way allows them to move a lot of meat quickly, at a desirable price.

But if you're suddenly the proud owner of 20 pounds of frozen beef, pork or chicken, your freezer may be feeling the hurt.

Matt LeRoux, an agriculture marketing specialist at the Cornell Cooperative Extension in Ithaca, N.Y., says this is a common complaint in Ithaca, where meat shares have taken off. So he had an idea: Why not start a community freezer space to make bulk meat sales easier for both parties?

"I'm trying to reinvent an old system that was really popular in the 1940s, when not everyone owned a freezer, and then started to disappear in the '60s," says LeRoux.

In early August, LeRoux launched a pilot project called the Meat Locker with an $80,000 grant from the U.S. Department of Agriculture's Farmers Market Promotion Program. It's an amount that LeRoux says will fund two shared spaces — one in Ithaca and one in the nearby town of Corning — for around 100 members each, for a fee of $3 to $5 a month.

According to Arthur Neal of USDA's Agricultural Marketing Service, the meat locker will also serve as food distribution hub, where people can rendezvous with farmers. "As consumers seek to purchase more local foods, including local meats and proteins, projects like this will aid those efforts," he says.

At first, LeRoux says, he considered raising money to help area residents buy home freezers. But then he realized a 10x14 freezer would be more energy efficient than 100 small home freezers running at once. "[Big freezers] are the public transportation of freezing meat," he says.

For consumers like Avi Miner, a local foods educator and farmers market manager in Ithaca, having access to a unit in the shared freezer space may inspire him to buy more local meat. Miner knows many of the farmers in his area, and values high-quality, pasture-raised meat grown close to home. But he admits that he springs for "good meat" less than half the time.

"There are a lot of people, like me, who love the idea of buying meat locally, but it's a big financial step — bigger than joining a vegetable CSA," Miner tells The Salt. Paying upfront, on the other hand, "would bring the price of local meat down to the point where it becomes affordable."

Once the locker is open, Miner plans to buy a quarter of an animal for himself or go in on half an animal with friends, if they can get a better price that way.

But is there enough demand for this kind of shared meat locker outside local food enclaves and college towns like Ithaca? According to LeRoux, that question is what drove him to want to build a second locker in Corning, a smaller town that USDA has identified as a food desert. Like the Ithaca meat locker, this site will also offer individual storage units within a 10 x 14 freezer.

LeRoux expects some of the clientele will be foodies and committed locavores. But he's also hoping to attract members of the international community in Ithaca, some of whom are always on the lookout for less-common meats such as goat.

And he thinks the freezers will appeal to folks watching their budget.