Accessibility links
Did Tyson Ban Doping Cows With Zilmax To Boost Foreign Sales? : The Salt Tyson Foods said it will stop using the controversial drug, which fattens cattle, because of potential animal welfare issues. But many in the beef industry say the company is just interested in boosting exports to countries like China and the European Union, where growth-promoting drugs for meat production are banned. 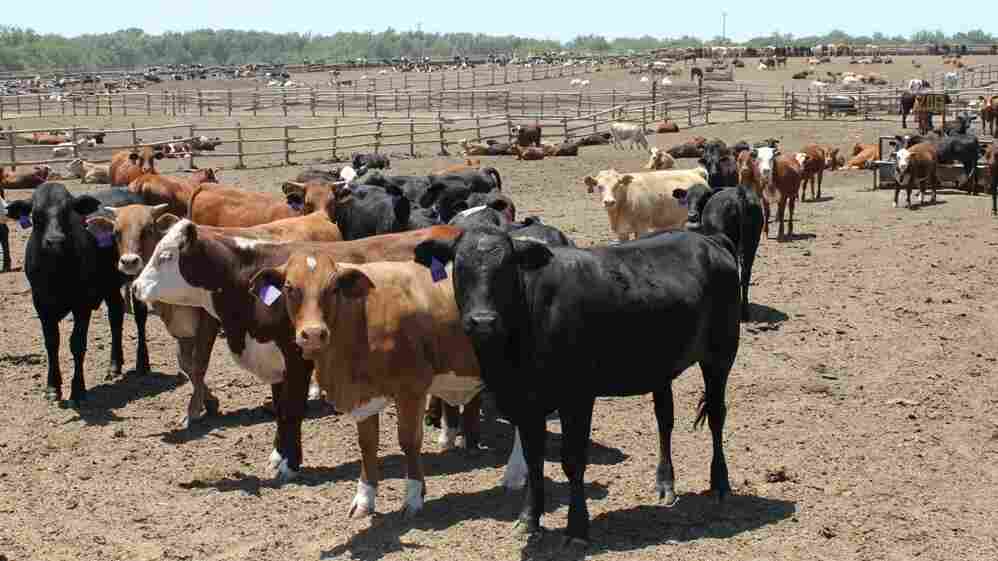 A pen at a feedlot in central Kansas that houses 30,000 cattle. Feedlots are where cattle are "finished" before slaughter, often with the use of growth-promoting drugs like zilpaterol. Peggy Lowe/Harvest Public Media hide caption 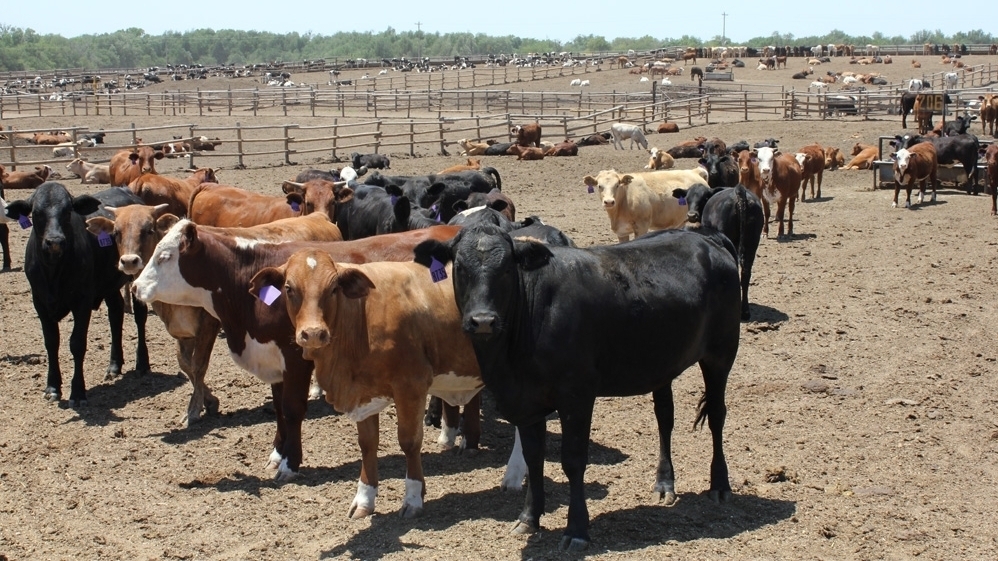 A pen at a feedlot in central Kansas that houses 30,000 cattle. Feedlots are where cattle are "finished" before slaughter, often with the use of growth-promoting drugs like zilpaterol.

Tyson Foods Inc. announced this week that it would soon suspend purchases of cattle that had been treated with a controversial drug, citing animal welfare concerns.

But many in the industry wonder if the real reason is the battle for sales in other countries, where certain drugs that make livestock grow faster are banned.

"I really do think this is more of a marketing ploy from Tyson to raise some awareness so they can garner some export business from our overseas export partners," says Dan Norcini, an independent commodities broker.

Surprising many in the industry, Tyson sent a letter to cattle feeders saying that as of Sept. 6, the company would no longer buy animals that had been treated with Zilmax, a drug that bulks up cattle by as much as 30 pounds just before slaughter. Tyson controls 26 percent of the U.S. beef supply and is the first company in the industry to make this change.

The letter cited recent reports of cattle being delivered for processing that couldn't walk or move.

"We do not know the specific cause of these problems, but some animal health experts have suggested that the use of the feed supplement Zilmax, also known as zilpaterol, is one possible cause," the letter said, adding that it wasn't a food safety issue.

The company that manufactures Zilmax, Merck Animal Health, issued a statement saying the product is safe.

"We are surprised by Tyson's letter," the statement said. "We are confident that, based on all of the available data on Zilmax, the experience reported by Tyson is not attributable to Zilmax."

Zilmax, approved by the FDA for use in livestock, is a beta-agonist and acts as a steroid, turning fat into muscle. As the Chronicle of Higher Education reported in 2012, the drug can make meat tough and tasteless. But new reports have surfaced recently suggesting that cattle are growing so large — up to 1,300 pounds — that they can't walk.

Lilly Callaway, an animal scientist who works for JBS, the largest beef-producing company in the world, told a meeting of cattle producers in Denver this week that her company is seeing increasing reports of animals fed beta-agonists as stressed.

"Truck drivers have indicated that there is a difference between loading cattle depending on the beta-agonist status of the diet," she told Feedstuffs, a weekly agribusiness newspaper. "Our plants have indicated that particular lots of cattle are showing up as 'tender-footed' — they do not want to move, seem lethargic and stiff, and have no energy."

Mike Callicrate, a Kansas cattle rancher and president of the Organization for Competitive Markets, a small group of beef producers fighting consolidation of the industry, says he wasn't surprised by Tyson's move. Consumers are growing increasingly aware of how their food is produced, he says, and they don't like what the use of what he calls "performance-enhancing drugs" to dope livestock.

"The Lance Armstrong, baseball-player type of compounds are precisely the same compounds being used in livestock production," he says. "We have killed our export markets with the use of all these growth-promoting, growth-enhancing, performance-enhancing type drugs."

China, Russia and many countries in the European Union have banned the use of these drugs in meat production. In May, Smithfield Foods, the largest pork producer in the world, announced it would cut in half its purchase of animals raised with a similar drug, ractopamine. Just a week later, Smithfield announced its sale to a Chinese company.

Patty Lovera, assistant director of Food and Water Watch in Washington, D.C., says she hopes that large companies' barring the use of such drugs will become a trend.

"It's a little bit unfortunate that it takes other countries having good standards to make an improvement in the U.S. marketplace," she said, "but at this point we'll take what we can get, I think, when it comes to how we look at the drugs that are allowed to be given to food animals."

But not everyone is happy about Tyson's decision. The last few years have been tough on cattle ranchers and farmers. They've suffered through drought drying up their hay and grass, then watched as that weather killed off corn and sent feed prices sky high.

Norcini, the commodities broker, says Zilmax was a godsend to producers, allowing them to feed the cattle less and get a better price thanks to the added pounds. He thinks Tyson is taking a big risk.

"They may appease or they may keep some people happy in ... the animal rights front. They may gain some followers and some accolades from that," he says. "But I think the cattle industry as a whole is not going to look at this particularly in a good light."

Meanwhile, Lovera and others wonder if Tyson is simply sending a message to all those countries now negotiating two large trade agreements with the U.S.

"This stuff is front and center in these trade negotiations so I just think it's really interesting to see a big player like this volunteer some change, probably to make export markets happy," she says.