Accessibility links
Three Ways Cooking Has Changed Over The Last 300 Years : The Salt When you put a librarian and a historian in the kitchen with a centuries' old cookbook, you get a lot more than recipes. You also get a sense of how much the way we eat has changed — from how we define dessert to the size of our eggs.

Three Ways Cooking Has Changed Over The Last 300 Years

Three Ways Cooking Has Changed Over The Last 300 Years 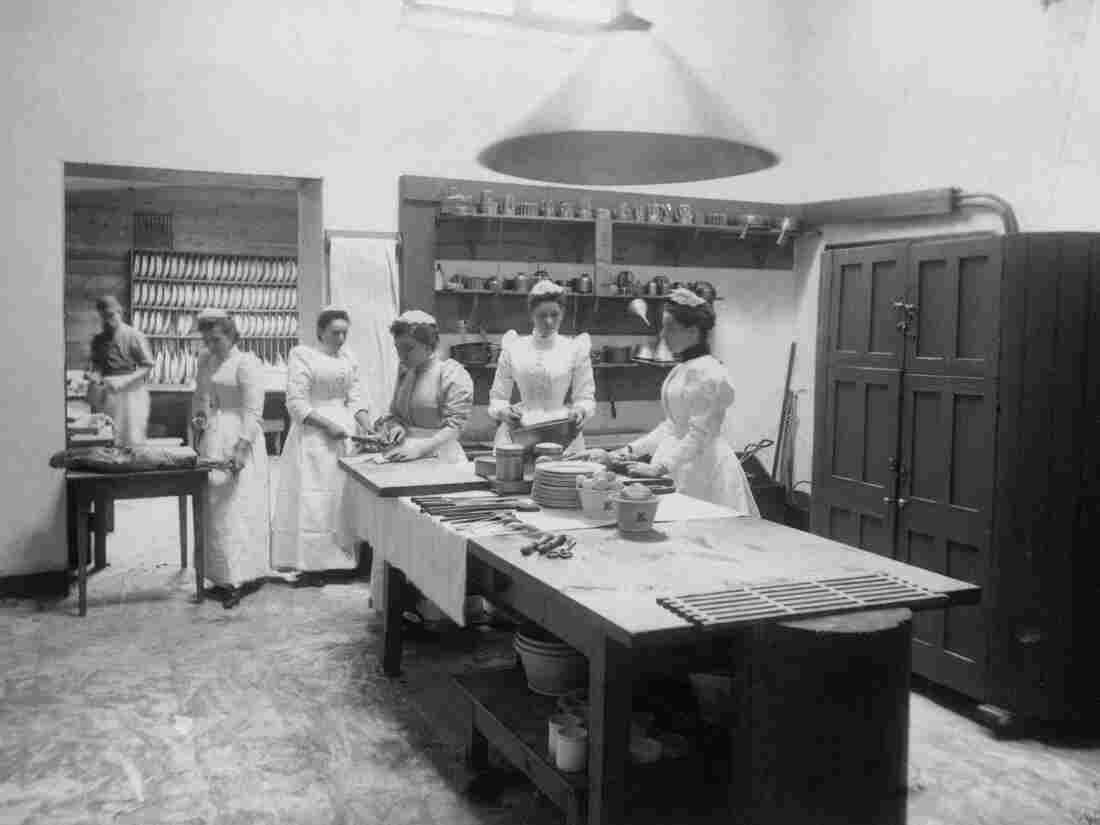 Maids at work in a large kitchen, circa 1890. W. and D. Downey/Getty Images hide caption 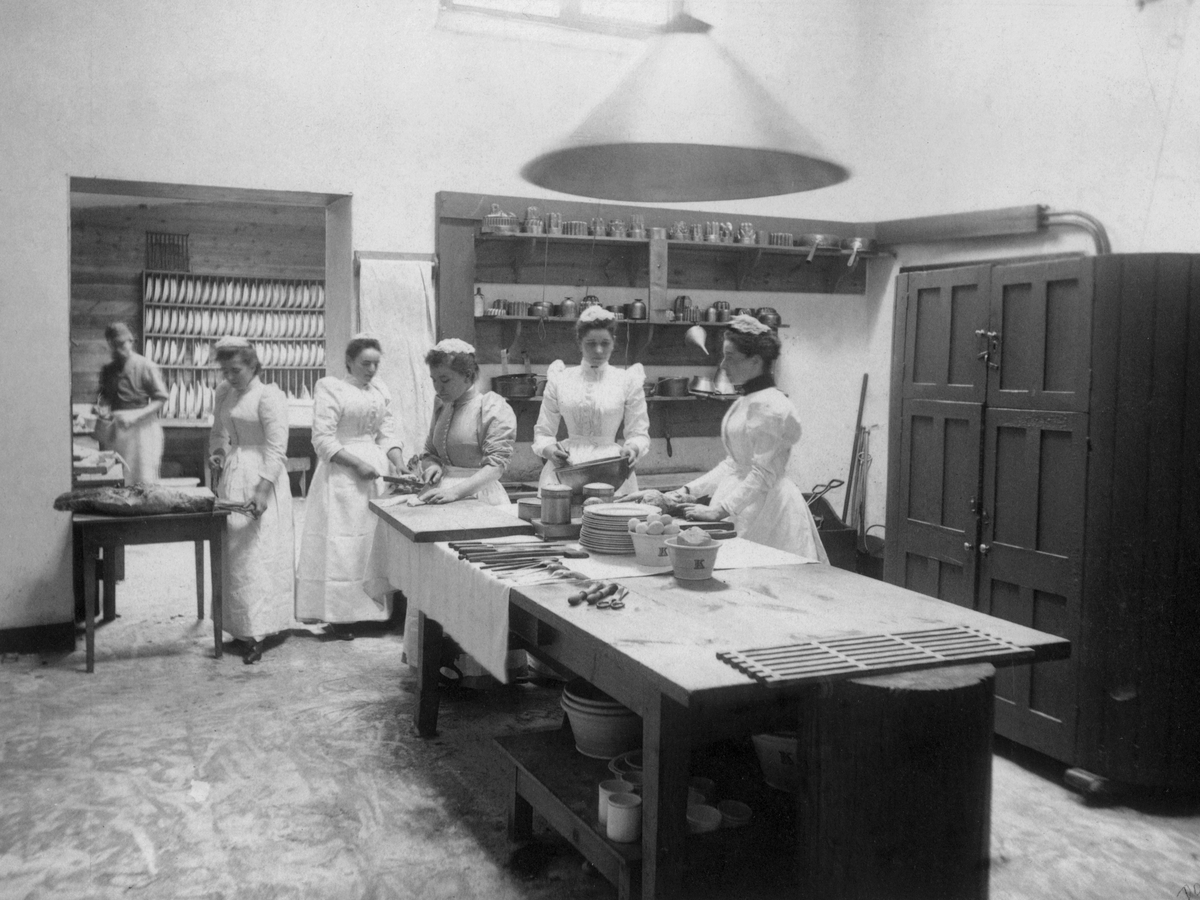 Cooking with calf's head and cow heel may not sound like the most palatable way to spend an afternoon, but it's all in a day's work for librarian Judith Finnamore of London's Westminster Archive Centre.

With help from food historian Annie Gray, Finnamore has been cooking – and blogging — her way through The Unknown Ladies Cookbook, a 300-year-old British compendium of family recipes. Jotted down by hand by several different women between 1690 and 1830, the recipes provide insights into the cooking habits of the Georgian and Regency periods. They also tell us quite a bit about how much culinary craft has changed over the centuries. 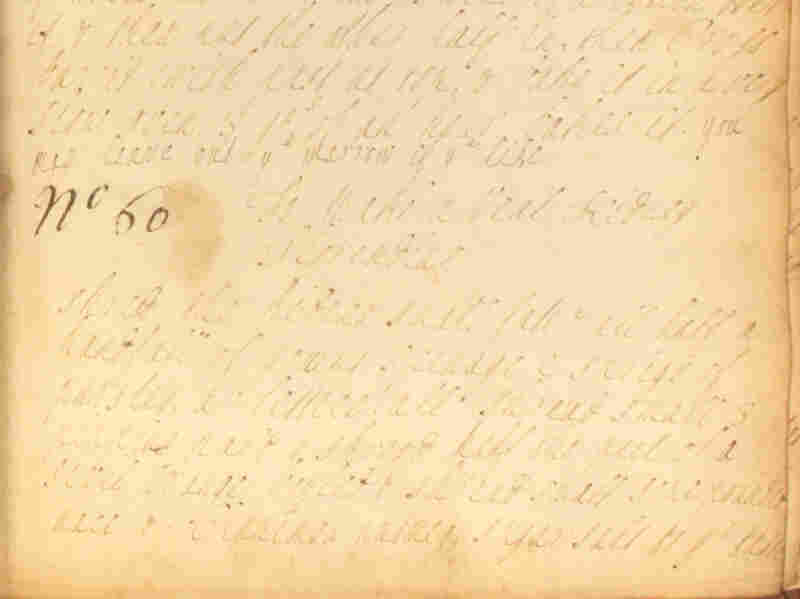 This handwritten recipe for veal kidney pie, from The Unknown Ladies Cookbook, includes a surprising combination of ingredients, including kidney, lettuce, apples, currants and rosewater. It is heavily spiced with mace, cinnamon and nutmeg and sweetened with sugar. Westminster City Archives hide caption 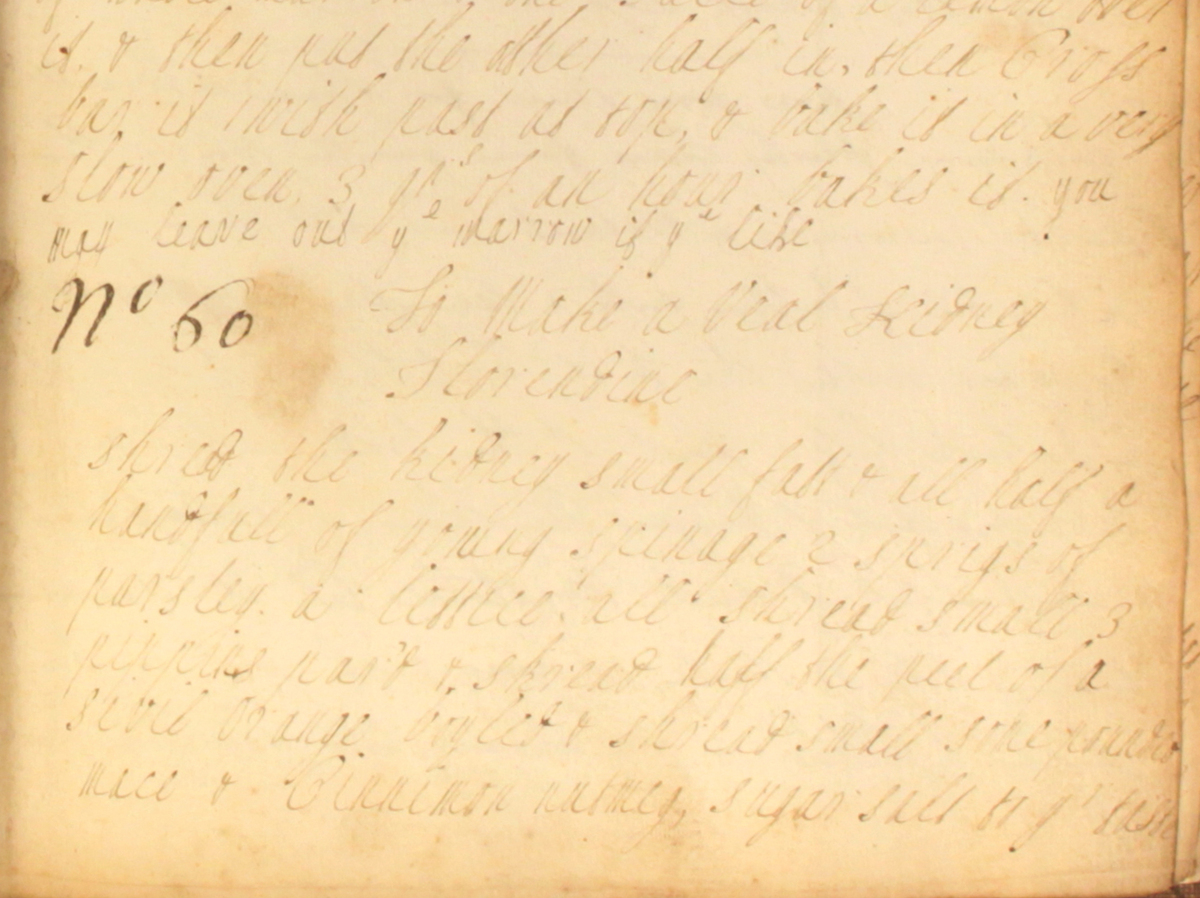 This handwritten recipe for veal kidney pie, from The Unknown Ladies Cookbook, includes a surprising combination of ingredients, including kidney, lettuce, apples, currants and rosewater. It is heavily spiced with mace, cinnamon and nutmeg and sweetened with sugar.

To Make a Veal Kidney Florentine

Shred the kidney small fat & all, half a handfull of young spinage, 2 sprigs of parsley, a lettice all shread small, 3 pippins par'd & shread, half the peel of a sivil orange boyled & shread small, some pounded mace & cinnimon, nutmeg, sugar, salt to yr taste, an handfull of currants, a large handfull of greated bread, 3 spoonfulls of sack, 3 of rose water, 3 eggs. Mix all well together & put them in a dish with puff paste at bottom & cross bar it at top. Bake it in a slow oven. This is for first course side dish.

Inventive Cooking With Carrots: These garden vegetables feature heavily in the cookbook, and were popular for lots of things beyond salad and carrot cake. Women of the Georgian period used carrots frequently because, like potatoes, carrots have a longer harvest and less spoilage. Cooks of the era also used them inventively, with recipes like carrots mashed with sugar, or carrots boiled, scooped out and filled with dried fruit and sugar, both typically served as a second course. "What we think of today as dessert, they would have served as a second course," Gray tells The Salt. "Their third course, or dessert, would be ice cream, biscuits or fruit. But today, we tend to serve those things at the same time to end a meal."

Brits Of Old Were Serious About Eating The Whole Animal: When people kept their own animals, they were much more conscientious about using as much of it as possible, because they had intimate, first-hand knowledge of what it takes to raise and slaughter their meat source. That ethos is reflected in many recipes that call for offal prepared using slow-cooking techniques to tenderize the tougher cuts. (There's even a recipe for mince pie made with cow's tongue.)

Gray says in the 20th century, people became more urbanized and squeamish, abandoning rich offal dishes such as bone marrow tart, made with almonds, cream, rosewater, candied fruit, chicken and marrow in puff pastry. But the habit also died, Gray says, because – as we've previously reported on The Salt — World War I and World War II took a heavy toll on the culinary skills in British middle- and upper-class kitchens: "Quite a lot of [these offal recipes] require a lot of cooking and processing," Gray says. "So when you start to lose a lot of servants during war times, it becomes more difficult. The skill level declines, because people only cook with the ingredients they have access to."

Dining After 'Downton Abbey': Why British Food Was So Bad For So Long

Incredibly Expanding Eggs: Some recipes call for as many as 30 eggs to bake a cake; others suggest whisking for an hour. But if you were to try out these recipes today, you'd need to use just two-thirds or even one-half of the eggs indicated, Gray says, because eggs have grown larger over the last century. As eggs began to be classed by quality and weight, farmers culled smaller chickens in favor of larger ones that produced bigger eggs.

Even in 1940, Gray says, egg cups were much smaller than they are today, indicating a gradual change. While whisking for an hour sounds like a workout, with servants to do the actual work, the women running a household wouldn't have minded. Gray says she has actually whisked eggs for a full hour, and it does make a difference in texture. So if you have servants to do it, why not?

Recipes From The Cookbook Of Unknown Ladies

'An Oyester Pye:' This recipe shows how the relative price of ingredients has changed. In the 18th century, people from all levels of society enjoyed oysters. This recipe for an oyster pie calls for 100 oysters.

"Take an hundred of the largest oysters you can get. Wash them, when opend, in [...] warm water. Strain all ther own liquor and put ye water yow wash ye oysters in likewise. Cut two large sweet breads in small bits. Have an half hundred bouled chesnuts peeled, six yolks off hard eggs, two anchovys shred, some lumps of whole marrow. Intermix all these in ye pye. Pour on ye liquor & a water glass full of white wine. Fill ye pye with what liquor it wants, with greawy. If you have not marrow, put in butter. Seasone it with salt, mace and cloves."

'To Make a Spineage Tort:' Sweet spinach tart – a surprising combination of sweet and savory ingredients. This recipe has been largely forgotten in Britain, but a very similar dish is still made in a parts of Provence during the Christmas celebrations. This would be served as a second course.

"Take 6 eggs, yolks & whites. Beat them well with a pint of sweet cream, a qr of a pd of crums of bread, a good handfull of spinage cut small, half a qr of currons, half a qr of almonds pounded wth a little rose water, half a nutmeg, half a pd of white sugar. Half a pound of drawn butter, 3 spoonfulls of brandy. Mix all well together. Lay paist thin at the bottom & sides of the dish & cross bar at top. 3 qrs of an hour bakes it."

'Lemmond Cream:' This recipe for lemon cream was a favorite with the Cooking Up History volunteers who gave it a test run.

"To four large lemmons squeesd put 3 qrs of a pd of the finest loaf sugar, 8 or 9 spoonfuls of water & a piece of the peel. Set it over the fire untill the sugar tis melted. Put in the whites of 4 eggs & strain it through a diaper napkin, doubled. Sett it on ye fire a gain & stir it all ye while. When it grows thick, take it off. Put in two spoonfuls of orange flower water. Lay some shreds of boiled lemmon peel at the bottom of the glasses."