Accessibility links
Incredibly Shrinking Avocados: Why This Year's Fruit Are So Tiny : The Salt California's crop of Hass avocados — those green fruit essential for guacamole — usually weigh a half-pound or more. But this year's avocados are the smallest in memory — some barely bigger than an egg.

Incredibly Shrinking Avocados: Why This Year's Fruit Are So Tiny

Incredibly Shrinking Avocados: Why This Year's Fruit Are So Tiny 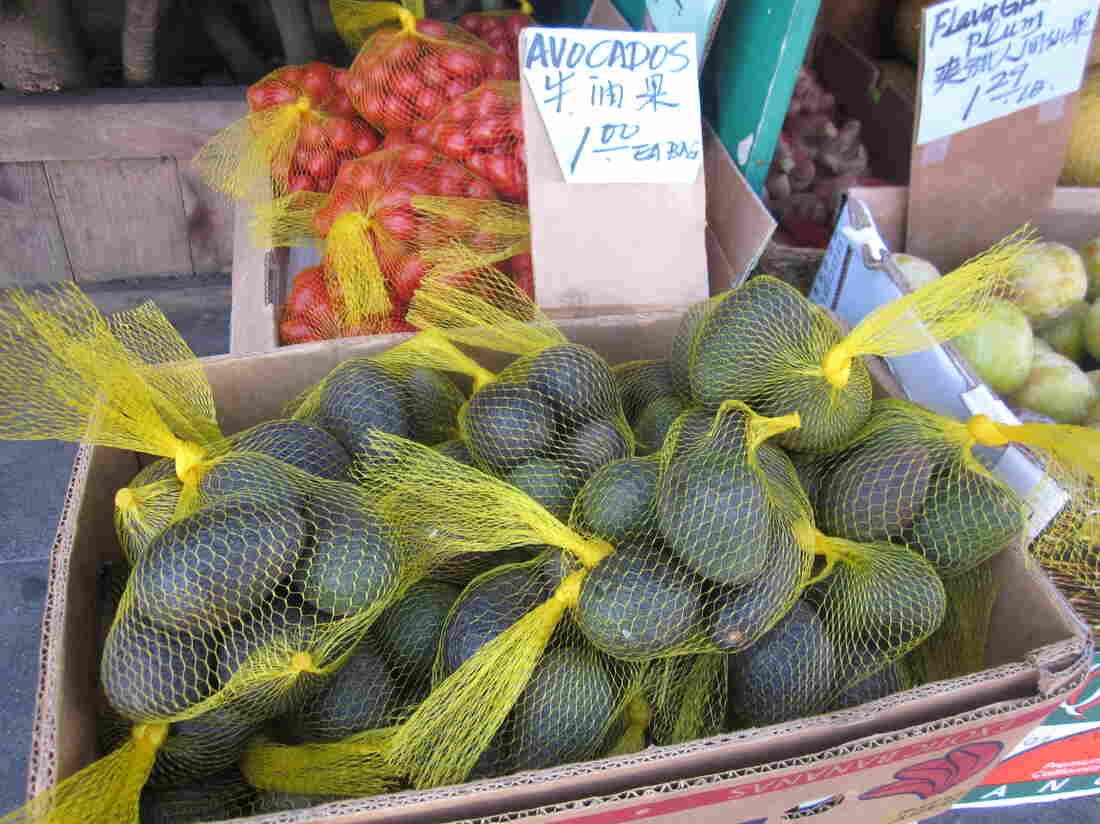 We found lots of avocados being sold six or 10 to a $1 bag in the San Francisco area. Some weighed less than 3 ounces. Alastair Bland for NPR hide caption 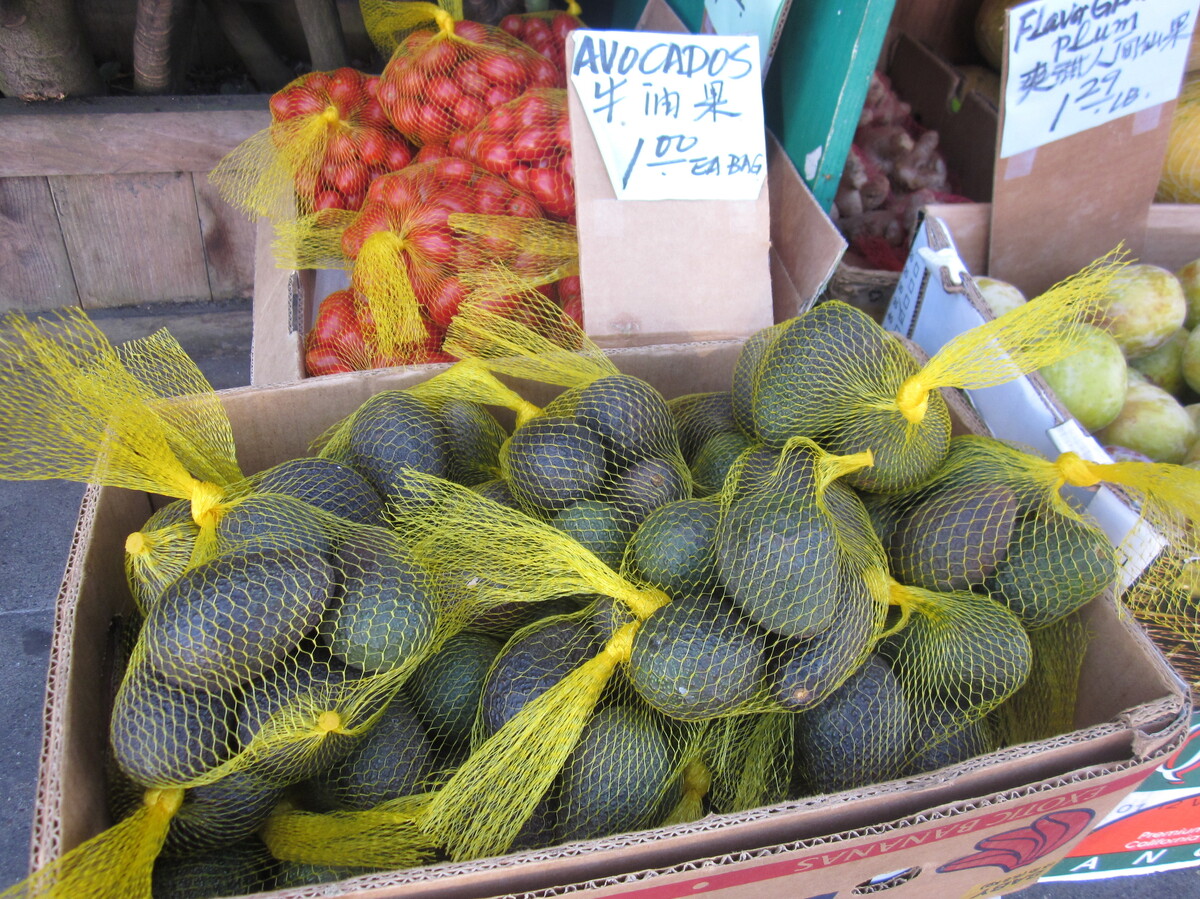 We found lots of avocados being sold six or 10 to a $1 bag in the San Francisco area. Some weighed less than 3 ounces.

What's thick-skinned and leathery, about the size of an egg, essential for guacamole and sold eight for a dollar?

No, not limes. Hass avocados. This year, anyway. These pear-sized fruits usually weigh half a pound or more. In the summer of 2013, though, hundreds of thousands of trees in Southern California are sagging with the tiniest Hass avocados in local memory — some just the size of a golf ball.

The main reason for the lemon-sized fruits, sources say, is a very unusual growing year that consisted of low winter rainfall in early 2012 (avocados spend more than a full year developing on the tree), erratic bee activity during the late spring bloom period, and lots of unseasonably cool and cloudy weather in the year since.

"I can't ever remember a season when all the avocados were this small, and that's over 30 years in the business," says Charley Wolk, a farmer with orchards in San Diego and Riverside counties. He cites a lack of rain and late pollination back in the spring of 2012 as main factors in the little avocados.

By most accounts, the fruits are about 30 percent smaller than usual. "That means less per pound wholesale," Wolk says.

Avocados larger or smaller than what is considered normal are generally less attractive to consumers, he says, and, therefore, command less money per pound. He says about 8 ounces is the optimal — and average — weight of a California Hass. A 25-pound case of such fruits usually draws $1.20 per pound, according to Wolk. With each ounce less in average fruit size, the per-pound rate can drop by 30 cents, he says.

But the positive trade-off is that this year's crop consists of more individual fruits than usual and, in fact, will probably weigh in at more than usual. Wolk says a half-billion pounds of fruit are expected by the end of October. Most years, the California avocado harvest — 95 percent of which is of the Hass variety — tips the scales at around 400 million pounds.

Gary Bender, a University of California avocado specialist and farm adviser in San Diego County, says that most years, several months after pollination, high July temperatures cause many fruits to drop off the branches. That didn't occur in the summer of 2012. The resulting abundance of individual fruits on each tree, combined with low rainfall, cool temperatures and sluggish photosynthesizing, has likely caused the stunting. Bender says that in 29 years on the job he has not seen such tiny avocados as those being picked this year.

Several growers told The Salt that 2013's avocados are weighing mostly 5 to 6 ounces — but that could be a generous overestimate. We collected avocados at several randomly selected grocery stores in San Francisco, and at each location — all independent, Asian-American owned shops — we found numerous avocados, being sold six or 10 to a $1 bag, that weighed in at less than 3 ounces, and several less than 2. 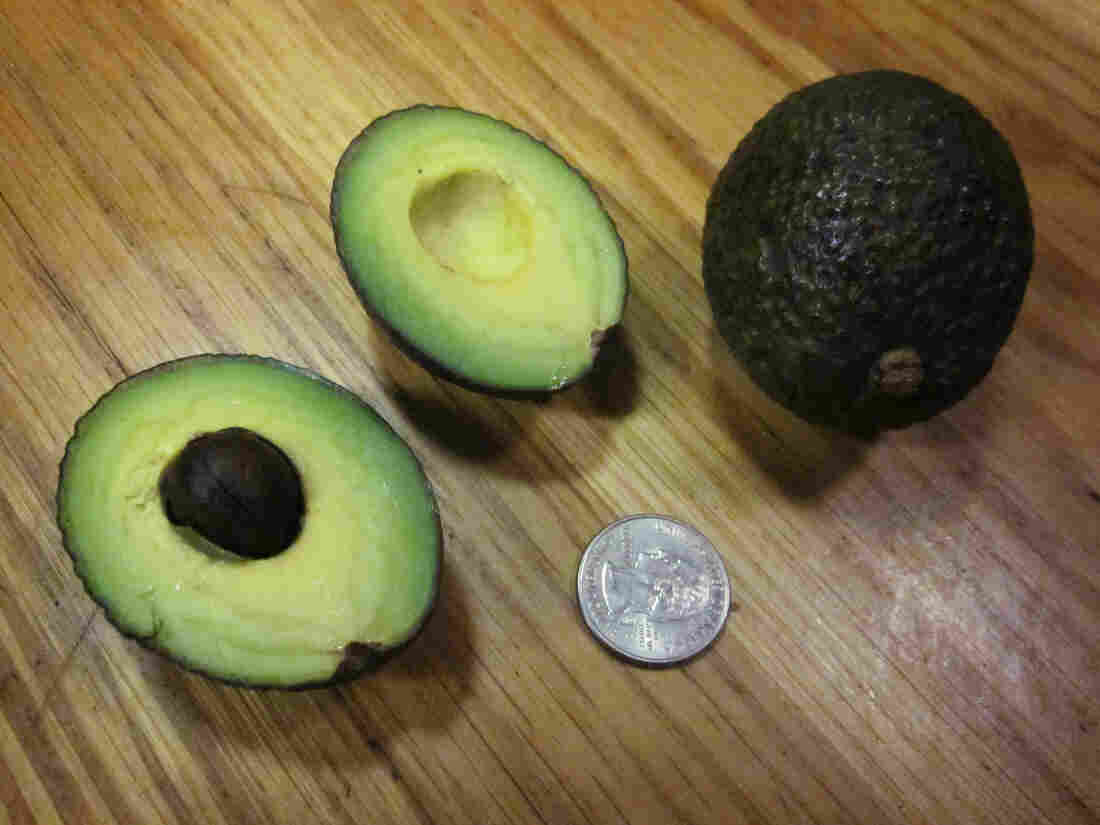 This season's avocados are the smallest in memory. We found some that were as tiny as 47 grams. Alastair Bland/for NPR hide caption 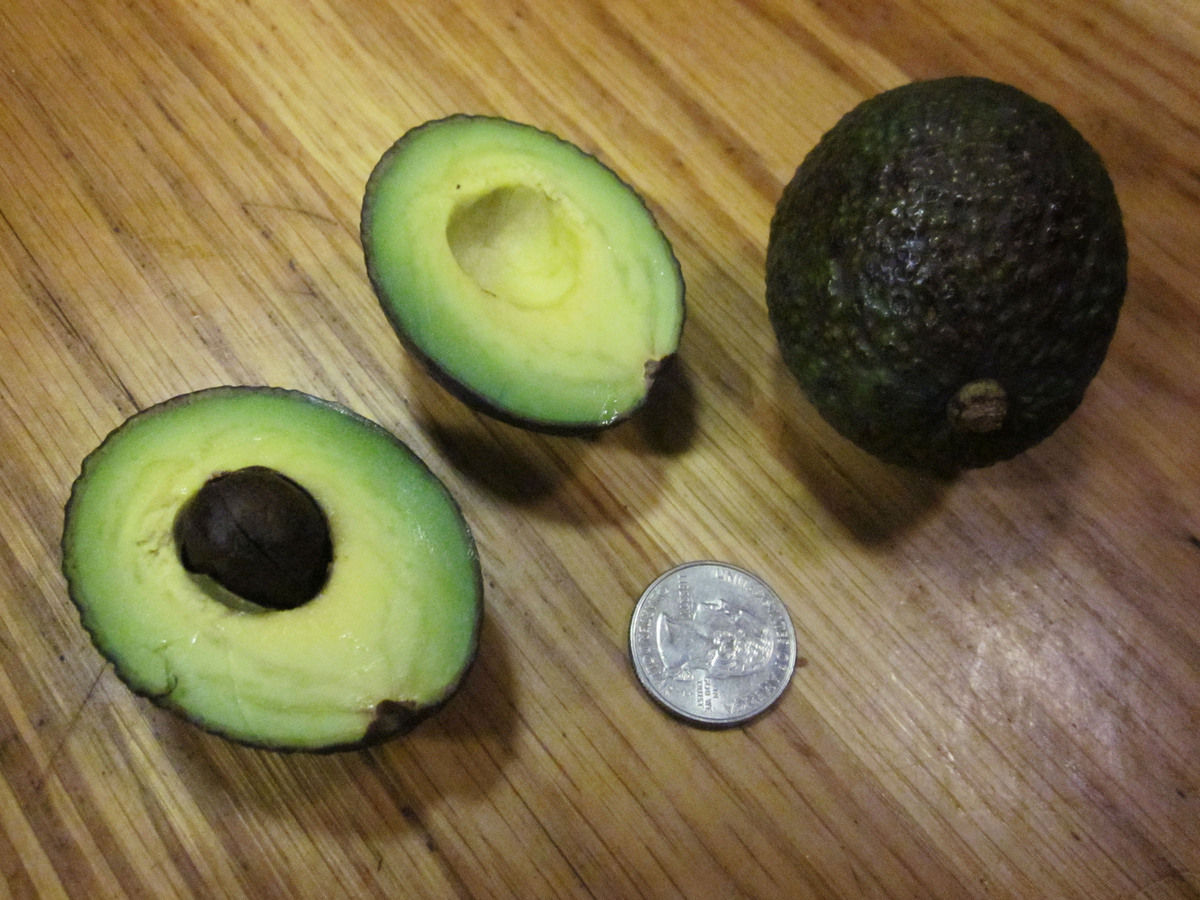 This season's avocados are the smallest in memory. We found some that were as tiny as 47 grams.

Jim Donovan, with the Mission Produce Company, a fruit wholesaler in Oxnard, says that harvesting 2-ounce fruits is likeliest to occur toward the end of the picking season, which wraps up in the fall.

Some growers, he explains, may selectively harvest bigger avocados all season and meanwhile wait for the smaller ones to grow larger. Avocados, unlike other fruits, can continue to gain size for months until they are picked.

"But eventually the farmer can't wait any longer because the tree will drop the fruit, so they do what we call a 'strip-pick,' and take every avocado left hanging," Donovan says. These tiny fruits may draw less than half the wholesale price of normal-sized avocados. Cases of exceptionally large avocados — sometimes 14 or 16 ounces each — can also draw less per pound, he says.

Elisabeth Silva, San Diego County's agricultural crime prosecutor who deals every year in a number of avocado theft cases, says there could be foul play behind the sudden flood of tiny avos. She describes a sly method of insider theft by which harvesting crews sometimes receive orders to pick only fruits larger than a certain size.

"So, sometimes they'll put those bigger fruits in the bins and they'll skim off the undersized fruits for themselves and sell them on the side," Silva says. These, she adds, can get "laundered into legitimate commerce." She says that while tiny avocados, sold in unmarked bags, could very well be stolen, grocers generally have no role in, or knowledge of, such illicit activity.

Farmers and other fans of bigger avocados may get relief next year when industry experts expect this spring's relatively low number of newly set fruits to result in fewer but larger avocados. Meanwhile, the little avocados of 2013 won't hurt you a bit. Donovan at Mission Produce points out that size and price may be down, but that quality is just fine.

"If you're willing to cut 10 pieces instead of two to make your guacamole, then you've got a bargain," he says.