Accessibility links
Eating On Mars? Be Sure To Pack The Tortillas : The Salt It's not the hard work that will make astronauts lose it on long planetary missions — it's boredom. And something that can become very boring very fast is a rote menu. A simulated Mars mission reveals why cooking for others will be vital on long space journeys, and why wraps rule. 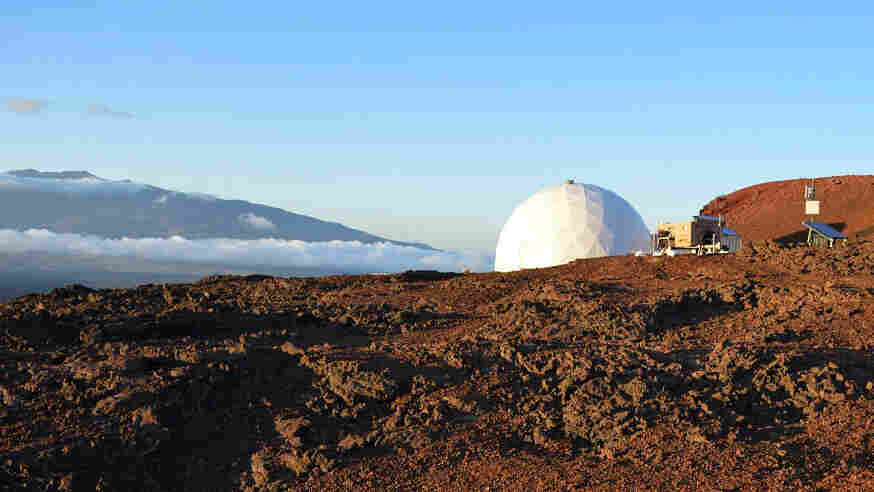 Mission to Mars: Six explorers lived in this simulated Mars habitat in Hawaii for four months, part of a NASA study to test the role of cooking and food on an extended space mission. Sian Proctor/NASA HI-SEAS hide caption 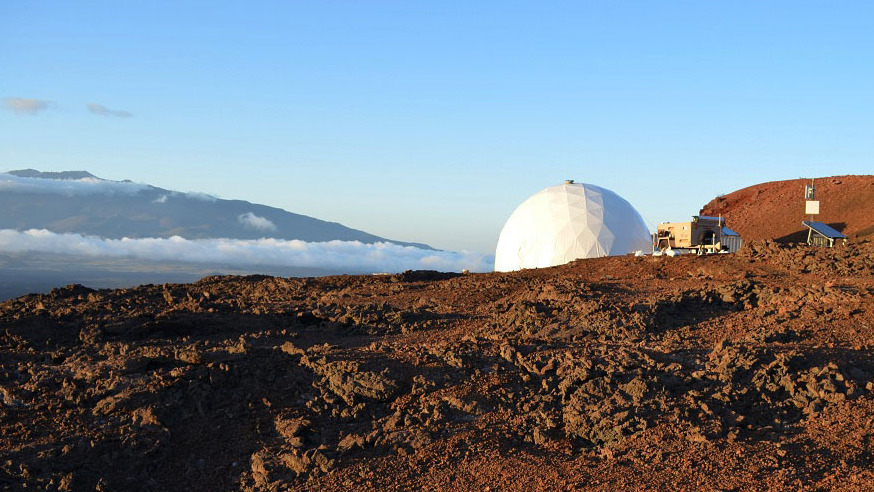 Mission to Mars: Six explorers lived in this simulated Mars habitat in Hawaii for four months, part of a NASA study to test the role of cooking and food on an extended space mission.

After several months of freeze-dried food, even the most committed carnivores would probably reach for the fresh produce.

So it's no surprise that the six explorers who were cooped up studying space-friendly foods on a simulated mission to Mars for the past four months went right for the mangoes and pineapple during their first meal outside their habitat Aug. 13.

"The freeze-dried stuff has a really nice taste, but not the right texture. It gets soft," says Jean Hunter, the Cornell University researcher who helped run the experiment, dubbed HI-SEAS (Hawaii Space Exploration Analog and Simulation.) "What they missed most was fresh fruits and vegetables," she tells The Salt.

The explorers weren't actually on Mars, of course, but in Hawaii (nice work if you can get it). They were volunteers selected from a pool of over 700 applicants with similar training and background as NASA's astronauts. These men and women lived in a geodesic dome on a lonely lava field in Hawaii, conducting experiments on sleep and tracking tropical storms. They only ventured outside to test astronaut gear for NASA.

As we reported last summer, HI-SEAS is the first mission specifically designed to study the role of cooking and food preparation on the kind of extended space missions that America is planning in the future. And while a big part of interstellar travel will focus on what we learn outside the safety of our climate-controlled habitats, everyone's gotta eat. 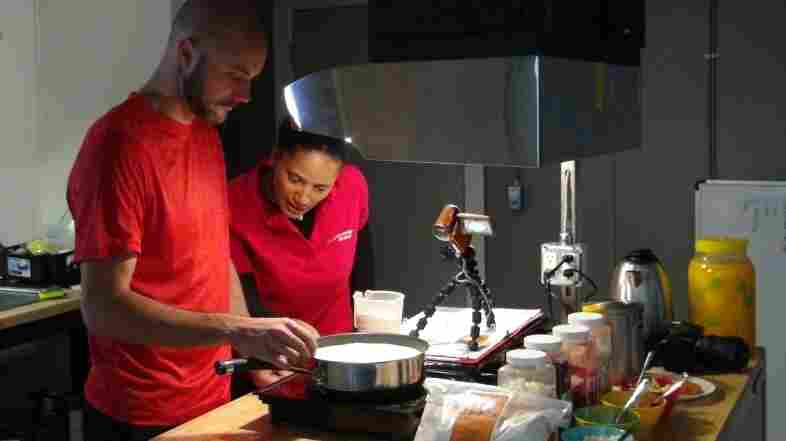 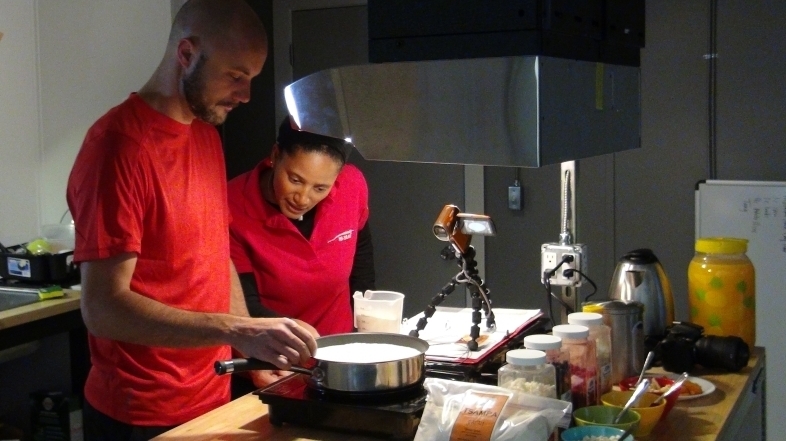 As Yajaira Sierra-Sastre, one of the explorers, explains, the goal was to conduct "a food, mood, and nasal study that investigates the relationship between food preparation time, repetition of foods, perception of food aromas, food acceptability, and food intake in a confined and isolated setting similar to what an astronaut would experience during a mission at a lunar or planetary outpost."

The "astronauts" were assigned a cooking schedule, with each responsible for a turn at the stove in between their other activities.

"We wanted them to be very busy, not sitting around studying cookbooks for elaborate dishes, because that's not reality. That's not what would happen [on a real space mission]," says Hunter.

Sure, they had many prepared meals on hand — the creamy wild rice soup and mashed potatoes were favorites, as well as the comfort of Nutella and the novelty of Tang. But HI-SEAS crew commander Angelo Vermeulen says some of the best meals were improvised and hand-held. 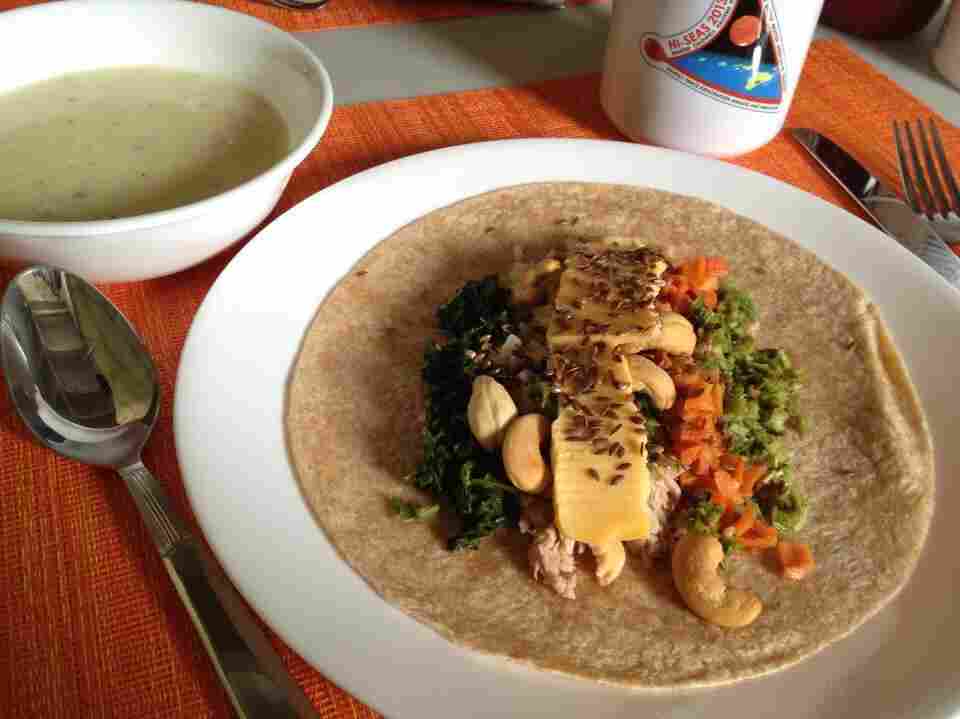 Wraps of all kinds were a big hit with the crew. Here's one take: a tuna wrap filled with rehydrated vegetables. NASA HI-SEAS hide caption 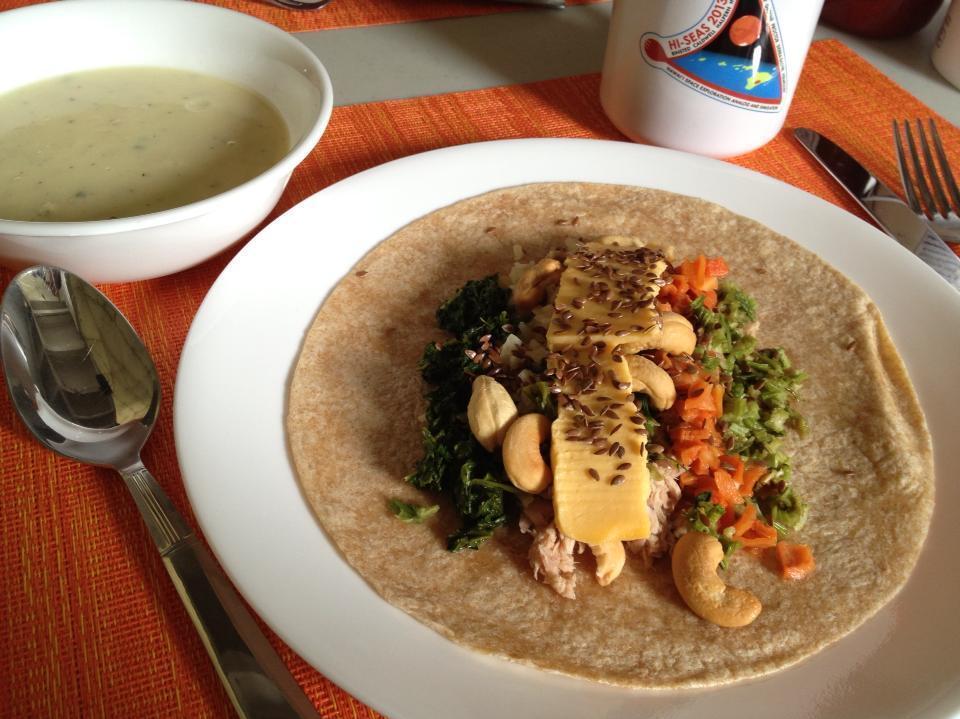 Wraps of all kinds were a big hit with the crew. Here's one take: a tuna wrap filled with rehydrated vegetables.

Some other successful meals included Russian borscht and Moroccan tagine.

The crew also enjoyed testing the two dozen recipes that the public sent in for them to try. (It's no Food Network production, but check out this video of crew members baking Hawaiian Celebration Cake using dehydrated pineapple.)

However, the mission didn't stop at just cooking and eating and mugging for the camera. The sharing of mealtimes — the chance to seek feedback from others, work together and get away from the isolation of working alone on your own project, Hunter says — made it stimulating.

The crew even had to work together to create a 3-D printed replacement part for their broken dishwasher.

There's much more to learn as the explorers are debriefed over the next few days, Hunter says, but "despite the time demands and the cleanup demands of cooking, the crew felt overwhelmingly that [it was worth it,]" she says.

After some much-needed runs on the beach and some extra sleep, the crew members will assist Hunter and the other researchers in setting up the next phase of the mission. But this time, they'll be safely back at Mission Control, watching other explorers navigate their former habitat.