Accessibility links
Fight Food Waste: Drink Rum, Matey : The Salt Pirates, pokers and alleged demonic origins — the history of rum is filled with raucousness and rebellion. To celebrate National Rum Day, we bring you tales from this drink's past, including its laudable origins as a food waste solution. 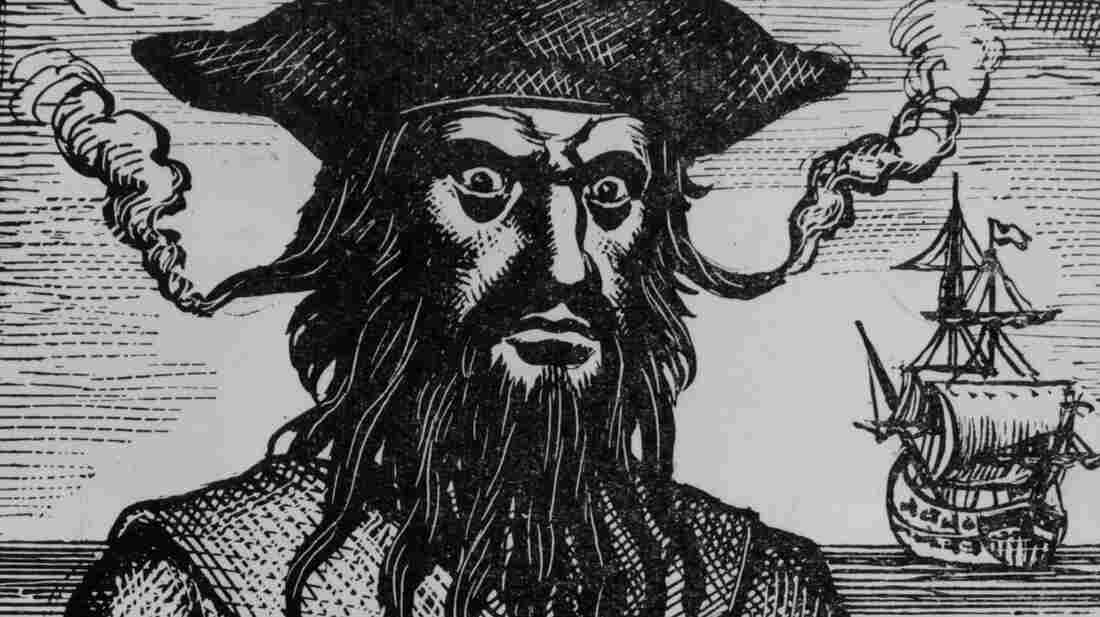 Captain Edward Teach, better known as Blackbeard, is said to have tucked slow-burning fuses into his beard and lit them on fire before plundering towns for gold and rum. Hulton Archive Circa/Getty Images hide caption 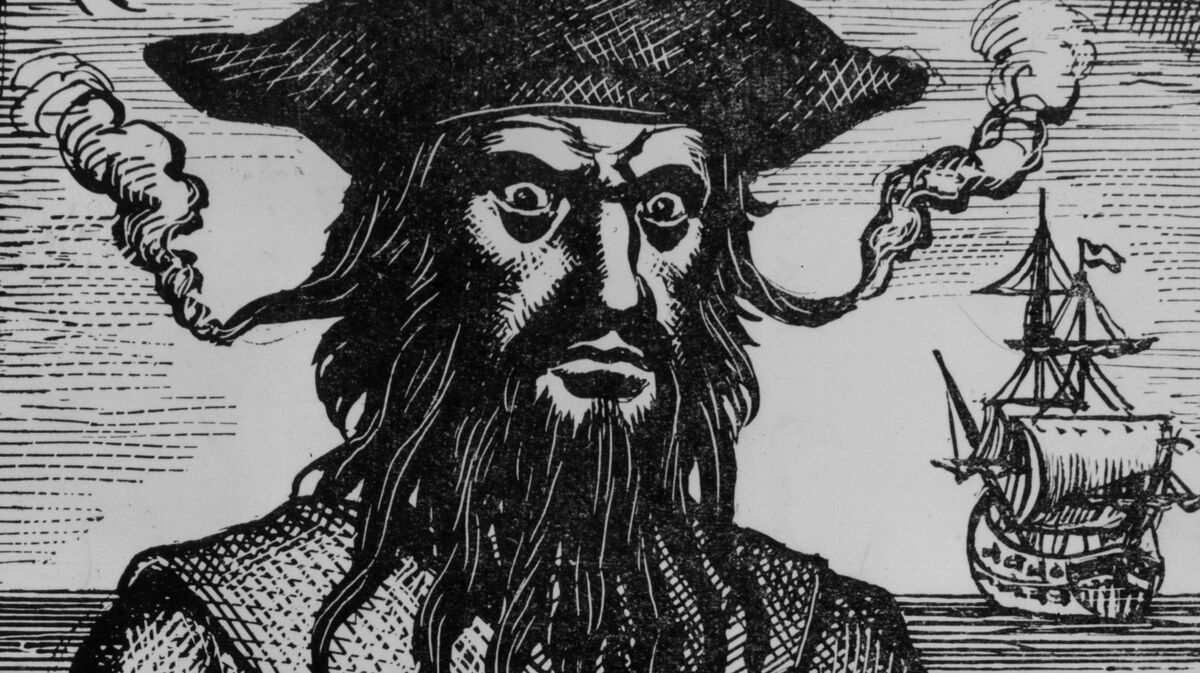 Captain Edward Teach, better known as Blackbeard, is said to have tucked slow-burning fuses into his beard and lit them on fire before plundering towns for gold and rum. 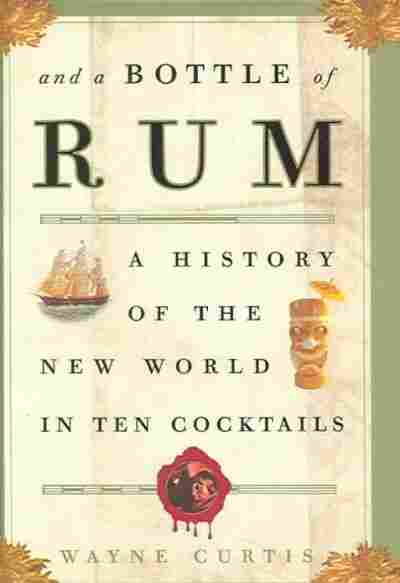 And a Bottle of Rum

A History of the New World in Ten Cocktails

The story of William McCoy sounds almost like a Prohibition-era version of Breaking Bad.

A mild-mannered shipbuilder, McCoy started smuggling booze along the Eastern seaboard during the early 1920s, only to become the top rum runner around.

He never touched his merchandise, never cut it with water, and shipped only the top-shelf liquors. In other words, he sold "the Real McCoy." 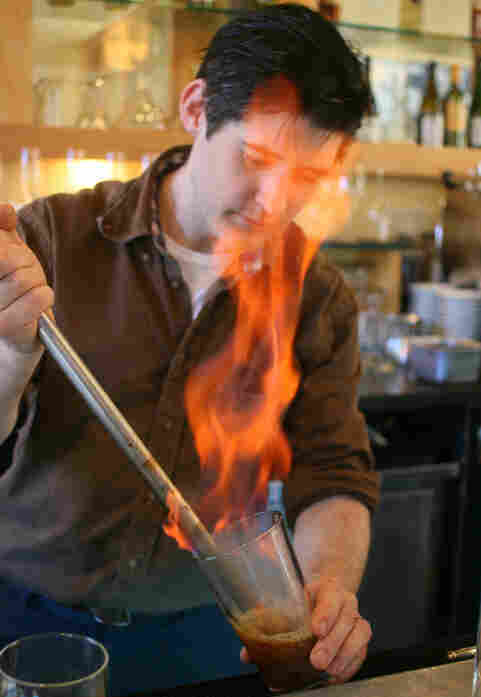 Flip back in time: Chef David Arnold mixes up a drink with a blazing-hot metal rod, a method similar to how bartenders used to make the flip cocktails that were wildly popular in colonial New England. Courtesy of Sam Meyer hide caption 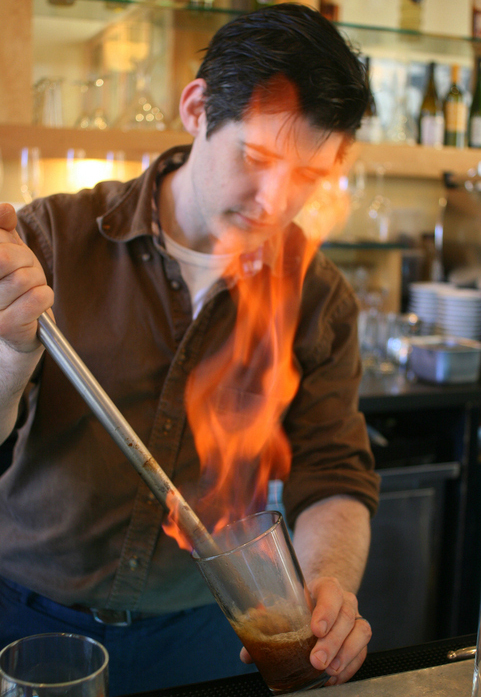 Flip back in time: Chef David Arnold mixes up a drink with a blazing-hot metal rod, a method similar to how bartenders used to make the flip cocktails that were wildly popular in colonial New England.

Such tales of renegades, rebels and raucousness pervade the history of rum. And to celebrate National Rum Day (yep, it's today), we offer you five "rum-bunctious" anecdotes that made us want to give this spring break party beverage another try.

1. It's A Food Waste Solution: In the 17th century, the world's demand for sugar exploded, and Caribbean farmers found themselves with a growing problem: molasses. Making crystallized sugar leaves behind a dark, gooey liquid that no one wanted at the time. Some farmers were just dumping the byproduct into the ocean.

Then someone, somewhere — maybe in Barbados, maybe in Brazil — figured out that this industrial byproduct ferments if you mix it with some sugary water. Just like that, the rum business took off.

In essence, sugar farmers had hit the jackpot. They were growing a cash cow in their fields and then turning their trash into booze.

2. Spawn Of The Devil? Alas, though, many of the early Caribbean rums weren't very good. "They were probably heavy, funky and grassy tasting," says Wayne Curtis, author of And a Bottle of Rum, a breezy history of the drink. "It was really seat-of-the-pants stuff."

3. How About A Hot Metal Poker In Your Cuba Libre? Nowadays, we have cocktails made with liquid nitrogen, infused with bacon and even ones that you inhale. But bartenders in the 18th century were just as creative — or gimmicky.

One of the most popular cocktails in New England those days was the flip. The bartender would mix together rum, beer and some other flavoring — molasses, pumpkin, an egg, or perhaps some milk. Then he'd stick a scalding hot ball of metal into the drink.

The tool was known as a loggerhead, and it consisted of a long rod with an iron ball, about the size of an onion, stuck on the end. Bartenders would keep the loggerhead in the fire. And when they plunged it into the cocktail, the liquid would foam, hiss and "send up a mighty head," Curtis writes in his book.

A few years ago, chef David Arnold of the French Culinary Institute invented a modern version of the loggerhead, called the Red Hot Poker. The metal rod heats up to about 1,700 degrees Fahrenheit, and then Arnold dunks it into cocktails to caramelize the sugars and add a toasty flavor, the Cocktailians blog reported.

4. Nothing Says Cocktail Like Gunpowder: Legend has it that the pirate Blackbeard, aka Edward Teach, would mix gunpowder into his nightly glass of rum, light the cocktail on fire and guzzle it.

Curtis says that's probably folklore. "But I suspect people may have added gunpowder to rum to improve its flavor," he tells The Salt. "Gunpowder has a lot of carbon in it, which can absorb the bad-tasting compounds."

This doesn't sound like a great idea to us rum newbies. But one bartender in New Zealand has tried it, and the results are surprisingly good, Curtis says. 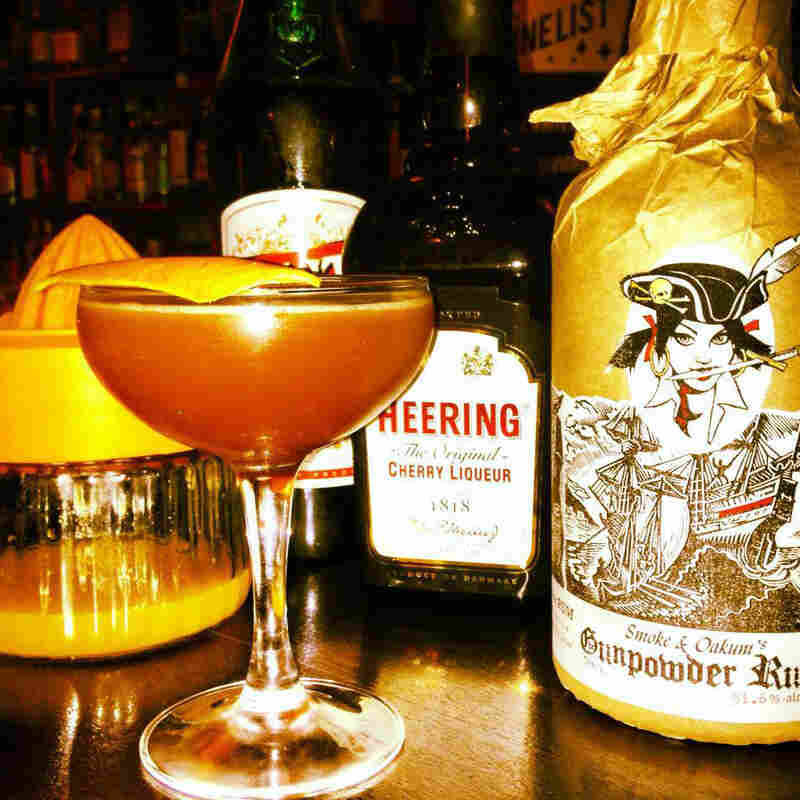 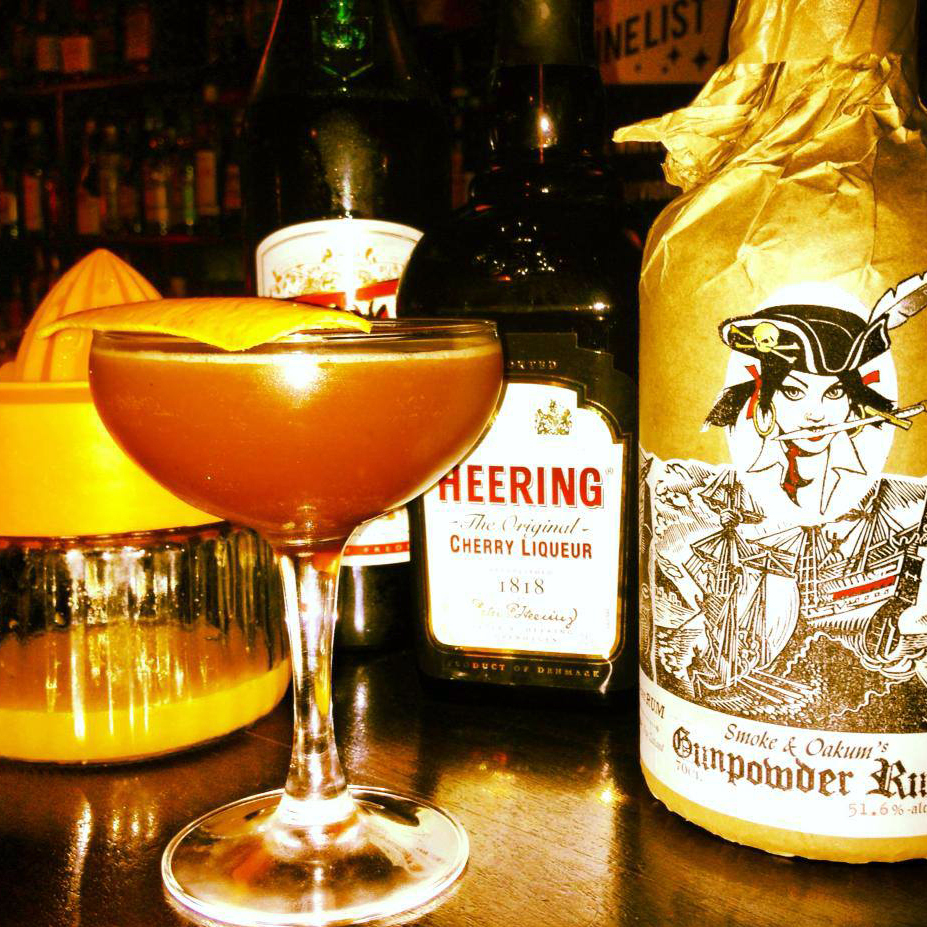 A blood and sand made with Ben Simpson's gunpowder-infused rum.

Ben Simpson at Motel Bar makes rum infused with gunpowder, leather and tobacco. Curtis has a few bottles of this Smoke & Oakum's Gunpowder Rum in his liquor cabinet, and he likes it. "You don't want to have a lot of it," he says. "But I make Manhattans out of it. It's got a lot of character."

5. Maybe You Don't Want A Little Captain In You: The marketing folks at Captain Morgan will tell you that the man behind their namesake liquor, Sir Henry Morgan, was a jovial, frolicking pirate who stole a few gold coins during the day and then threw back the spiced rum at night with his rollicking crew.

But the real captain was probably not the best drinking buddy, Curtis says.

"Captain Morgan was a brute and never shy about torturing people," Curtis says. Lionizing him on rum bottles is almost akin to having a dictator on a label, he says. "Morgan would go into a village, find who knew the most [about where gold was buried], and then torture them to death until he told them where the treasure was."

Throughout his career, Morgan destroyed 18 cities, four towns and 35 villages, Curtis writes. Oh, and he probably wasn't even much of a rum drinker until after he retired in Jamaica, Curtis says. "He died a broken-down drunk at age 53." 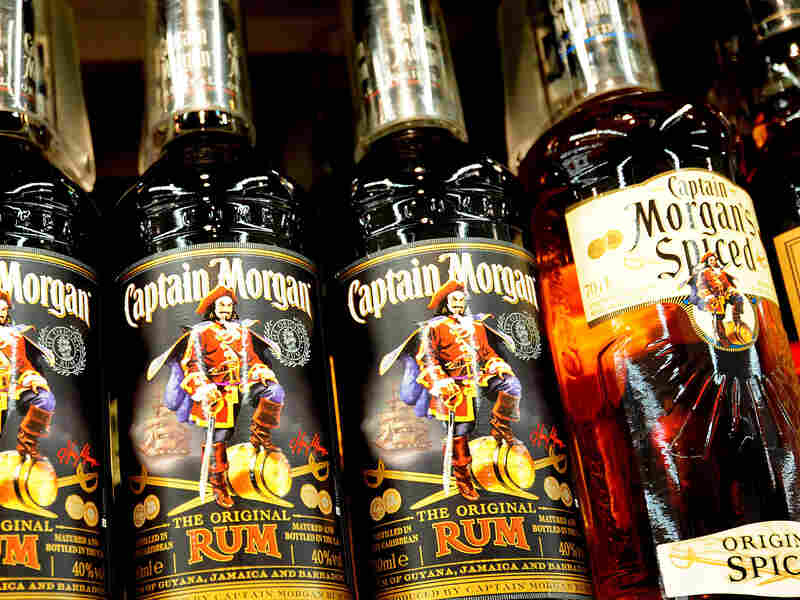 Captain Morgan rum is, by volume, one of the top-selling brands of spirit in the U.S. Rui Vieira/PA Photos/Landov hide caption 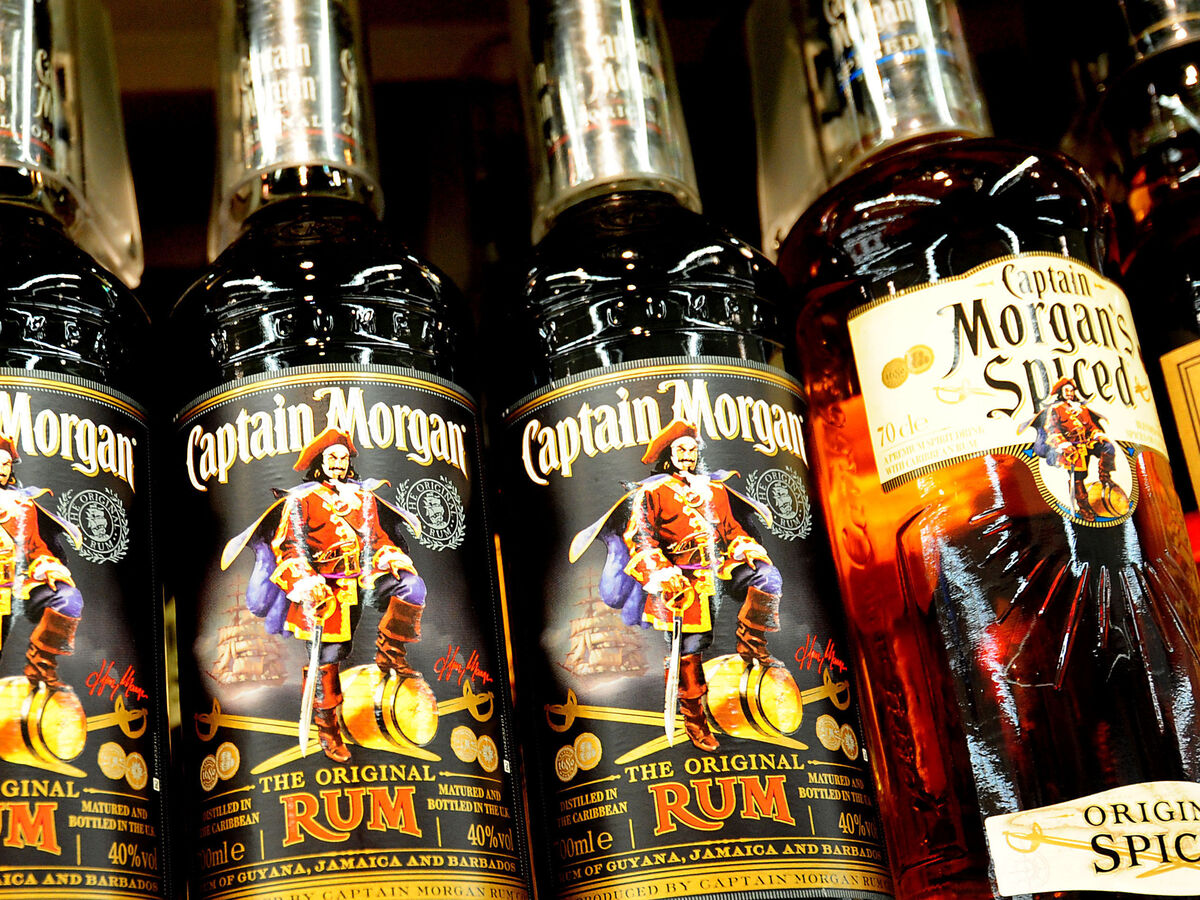 Captain Morgan rum is, by volume, one of the top-selling brands of spirit in the U.S.

Today, Captain Morgan is one of the top-selling brands of liquor in the U.S. But if you're just sticking to the Captain and the clear Bacardis, you're really missing out, Curtis says.

"Rum is coming back for sure," he says. And he starts listing off some of his favorites: El Dorado from Guyana, Appleton Estates from Jamaica, Privateer from Massachusetts and Ron Zacapa from Guatemala.

The latter distillery has a rum that, because of how it has been aged, contains some ethanol molecules that are over 100 years old. Now that's a taste of history.

Read an excerpt of And a Bottle of Rum