Accessibility links
Tortellini, The Dumpling Inspired By Venus' Navel : The Salt Legend has it that an innkeeper caught a glimpse of the goddess of love in her bedroom and then rushed to his kitchen to create an egg pasta inspired by Venus' belly button. Today the art of making tortellini is endangered, but several groups are devising creative ways to preserve the tradition. 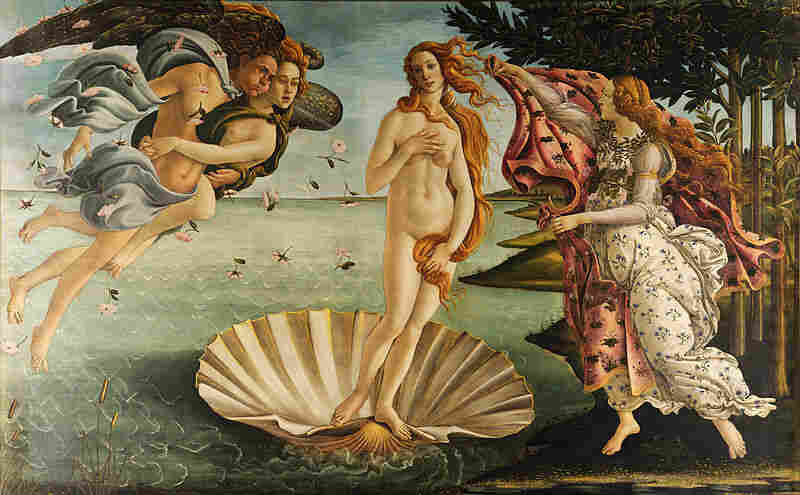 Even in Sandro Botticelli's painting The Birth of Venus, the goddess's belly resembles a plump, firm tortellino. Wikimedia.org hide caption 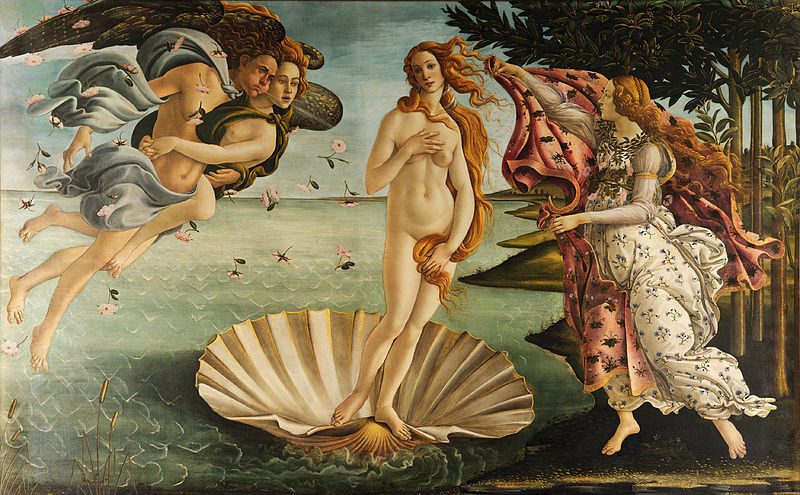 Even in Sandro Botticelli's painting The Birth of Venus, the goddess's belly resembles a plump, firm tortellino.

Tortellini — small circles of rolled dough folded around a filling — are one of the most renowned members of the Italian pasta family. In the land of their birth, the region near the Italian city of Bologna, they're strictly served as broth-like dumplings.

Possibly no foodstuff in Italian cuisine is surrounded by so much history and lore. 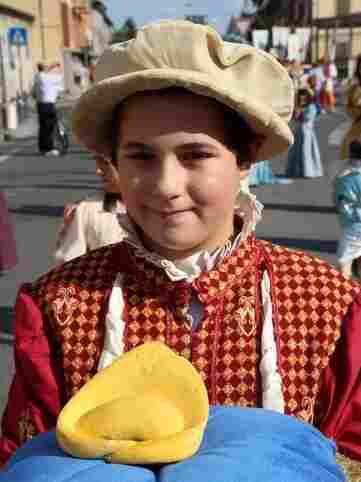 A young boy in Castelfranco Emilia, Italy, shows off a ceramic version of a tortellino during the town's annual celebration of the pasta's nameless inventor. Photo courtesy La Carbonara Blog hide caption 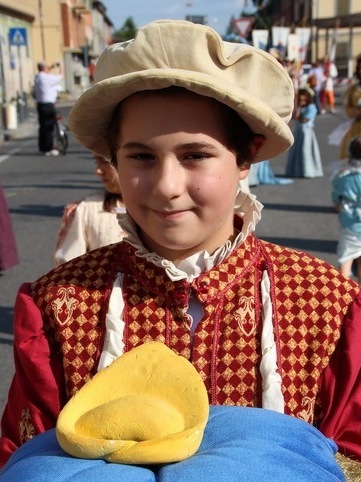 A young boy in Castelfranco Emilia, Italy, shows off a ceramic version of a tortellino during the town's annual celebration of the pasta's nameless inventor.

Legend has it that Venus, the goddess of love, once stayed at the local tavern in the town of Castelfranco Emilia, halfway between the gastronomic giants Bologna and Modena.

The innkeeper spied on his guest through the keyhole of her room and got a partial glimpse of her. Struck by what he saw, he rushed to his kitchen, rolled out a sheet of fresh egg pasta and invented a shape inspired by Venus' navel.

Every year, Castelfranco Emilia celebrates its favorite son — the nameless inventor of the most sensual of all pasta shapes. Drummers, flag-throwers and local residents parade through town dressed in elaborate Renaissance costumes. On a makeshift stage, the legend of the peeping-Tom innkeeper is more or less re-enacted. The mood is festive and suitable for children.

"Inspired by the sight of the divine navel," the master of ceremonies intones, "our innkeeper invents the prestigious ... tortellino!"

While its origins may not be in antiquity, the first known tortellino recipe dates to 1570.

Gianni degli Angeli is the president of the San Nicola Association, which has taken on the task of safeguarding the local region's renowned culinary traditions.

He says the No. 1 symbol of the local gastronomic culture is the tortellino. "In times of poverty and hardship, we ate tortellini only at Christmas, Easter and at weddings, because the filling is made of costly ingredients like prosciutto and parmesan cheese," he says.

Tortellini are an integral part of family life in the Emilia region, says Massimo Bottura, chef and owner of a three-Michelin-star restaurant in Modena. "I grew up under the kitchen table escaping my older brothers at my grandmother's, where flour fell on my feet."

Turning Flour And Eggs Into Tortellini

Women from Castelfranco Emilia, Italy, demonstrate how they prepared 180 kilograms of tortellini for the 2012 London Olympics.

At an international gathering of famous chefs, he said that tortellini bring out a competitive spirit. "Every family has its own recipe for tortellini, more Parmigiano, less Parmigiano," he says. "I don't put prosciutto. I want mortadella. There are more discussions about tortellini in our family, in every Emilian family, than about politics."

Politics and soccer are way outranked in Emilia by the desire to eat well — very well.

Making tortellini is an elaborate operation and has long been the domain of women known as sfogline. The word derives from sfoglia, the sheet of fresh egg pasta that is painstakingly rolled out by hand.

Grazia Battistini is 63 years old, and she's been a sfoglina for some 50 years. 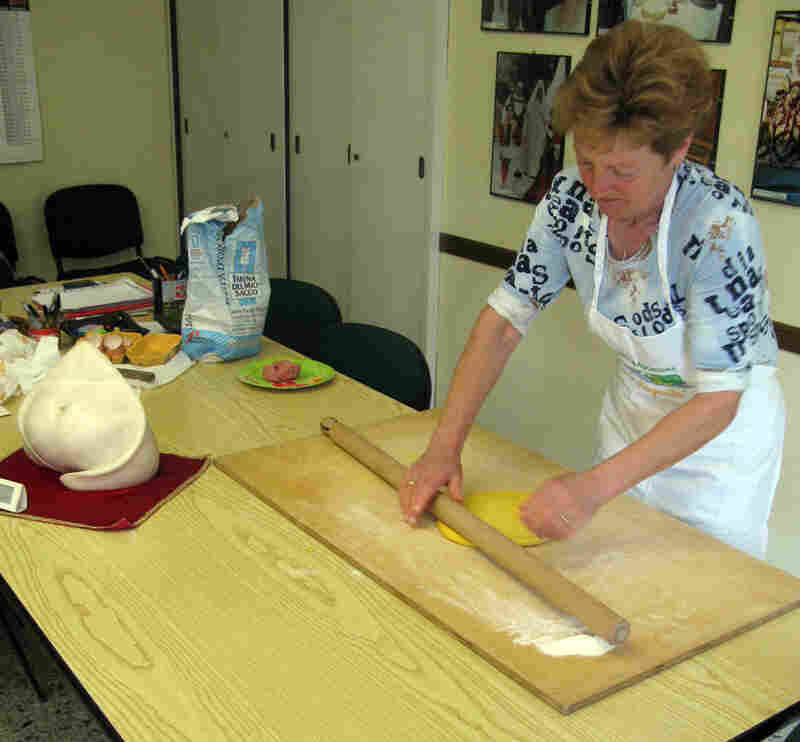 Grazia Battistini, 63, has been been making tortellini as a sfoglina for about 50 years. A statue of the ideal tortellino shape sits in the foreground. Sylvia Poggioli/NPR hide caption

"Grandmothers and mothers handed down the tradition to daughters and granddaughters. We started when we were 7 or 8 years old," she says. "If we couldn't reach the tabletop, they gave us a stool to stand on. Little by little, we learned to roll and then to cut the pasta. We had to be careful not to cut our fingers."

For most of her life, Battistini says, making fresh egg pasta was an activity that involved the entire family. "It was an occasion for socialization," she says. "We were all together, men, women, children, everyone working together collectively."

Battistini gives us a demonstration on a wooden tabletop.

"For every 4 ounces of flour, we use one egg," she says. "We make a crater in the center of the flour, and we break the eggs in the center and whisk briskly with a fork."

Battistini then starts mixing and scraping, and kneading the dough mostly with the palm of her hands — for at least 10 minutes. Once it's smooth and in the shape of a ball, she sets it aside to rest and starts on the filling, a mixture of prosciutto, mortadella, pork loin, eggs, Parmesan cheese and nutmeg.

Battistini then returns to the sfoglia. Her entire body sways, rhythmically and sensually, as she stretches the dough over and over again with a rolling pin until it forms a large paper-thin sheet, not more than 1 millimeter thick.

When the sheet is ready, Battistini starts cutting it in strips and then into little squares 3 centimeters per side. She puts a dab of filling in the center, folds the square into a triangle, presses it, then rolls it around her index finger — out comes the belly-button shaped dumpling.

Like most Italians, Battistini has little patience for culinary experimentation and observes a rigid dogma in the kitchen. 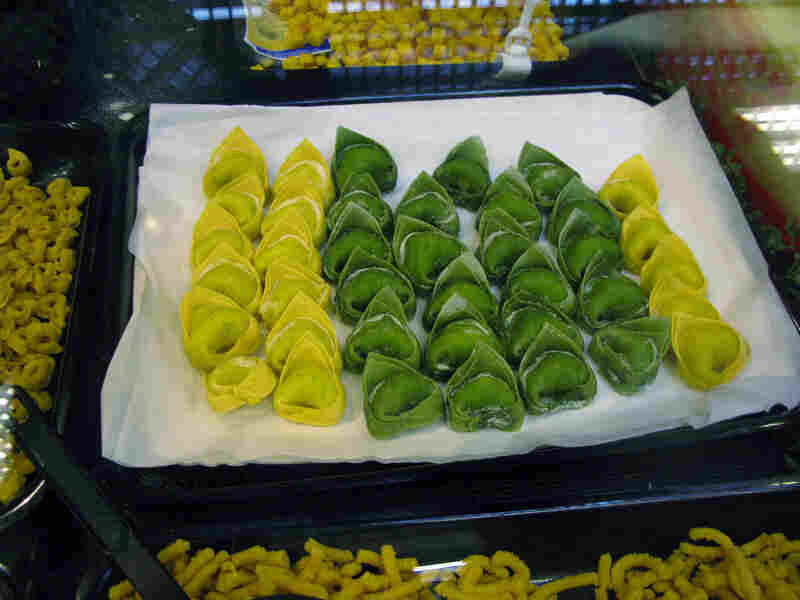 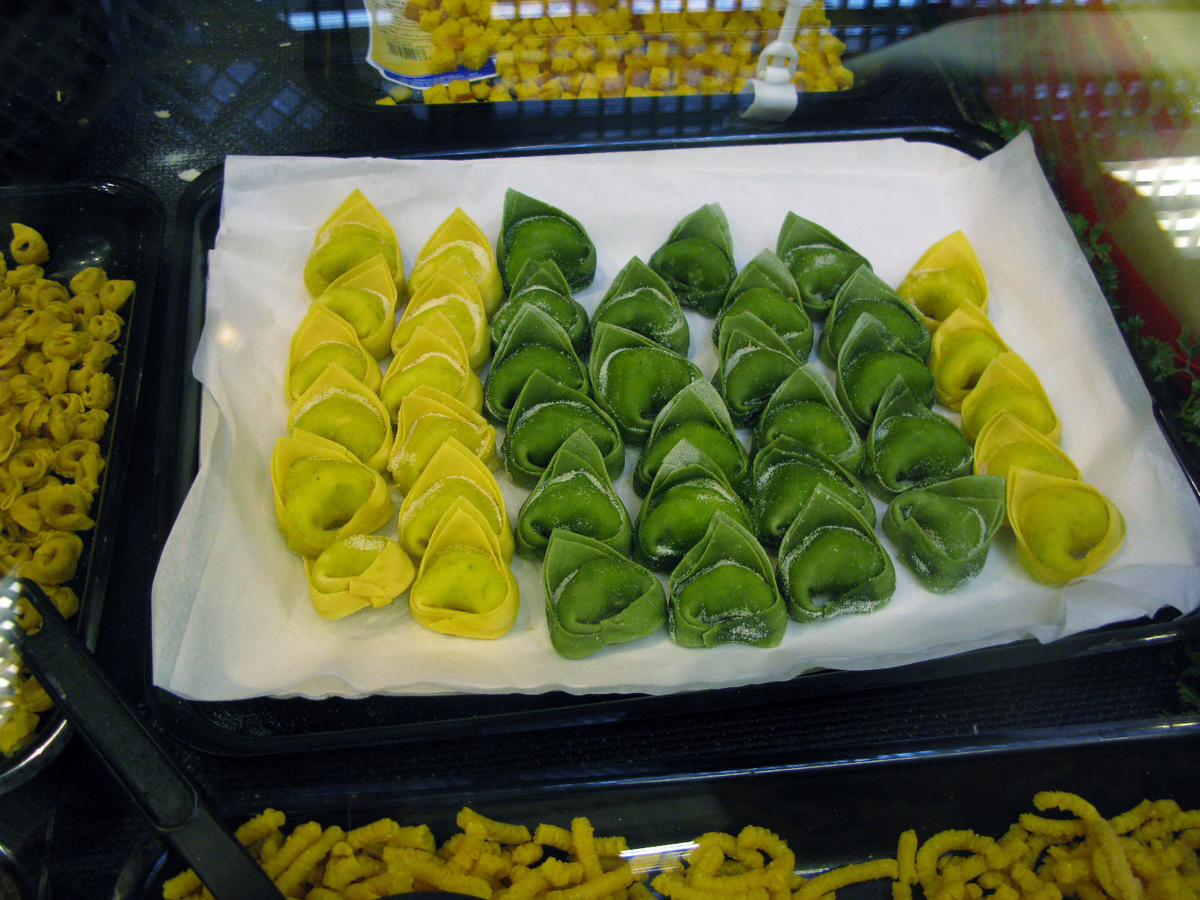 Hand-made tortelloni – the larger size — are displayed at a grocery store in Castelfranco Emilia, Italy.

"The tortellino can only be served in broth, that's what tradition teaches us. Of course, some people today serve it with butter, cream or tomato sauce, but then they're killing the taste of the filling."

Once upon a time, a young man seeking a wife wanted first and foremost a master sfoglina. But starting in the 1960s, women started working outside the home, and many no longer know how to make fresh egg pasta.

The art of making tortellino is endangered.

Now, a group of young graphic designers from Modena has produced an app to safeguard the art of making tortellino, its history and the role in plays in the local culture.

Lucia Barbieri says it's aimed at teaching everyone how to make tortellini.

"For example, men are showing a keen interest in making tortellino," Barbieri says. "When I get together with a group of friends to make pasta, the men are always most enthusiastic as they learn an art that always belonged to women alone."

Meanwhile in Bologna, a new business opened last fall in the center of town — it's a tortellino-to-go joint, appropriately called Tortellino Bologna.

Open every day until midnight, it caters to students, office workers and even housewives. Customers can order online.

It's the brainchild of Federico Spisani, who left his job in a bank to embark on an effort to safeguard his grandmother's culinary traditions with a contemporary twist. He has enlisted an army of sfogline — several of whom are in their 80s — to prepare fresh pasta every day. Servings come in Styrofoam cups.

"I try to unite the Italian quality of food — the best, in my opinion, in the world, — in a very fast-food way, cheap and fast," Spisani says.

As we leave, two well-dressed, middle-aged women enter the shop circumspectly and, probably hoping nobody will recognize them, they order two servings of takeaway tortellino.