Accessibility links
Julia Child Was Wrong: Don't Wash Your Raw Chicken, Folks : The Salt The doyenne of TV chefs imparted much wisdom to American cooks, but one piece of Child's advice you should ignore is to wash your raw poultry before cooking. It spreads germs. Everywhere. 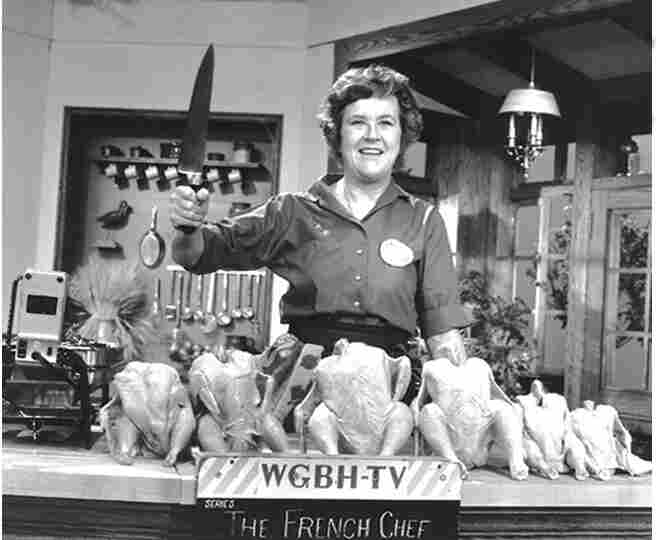 Julia Child poses with "the chicken sisters" before an episode of The French Chef in which she teaches us how to roast a bird. Courtesy of Paul Child/PBS hide caption 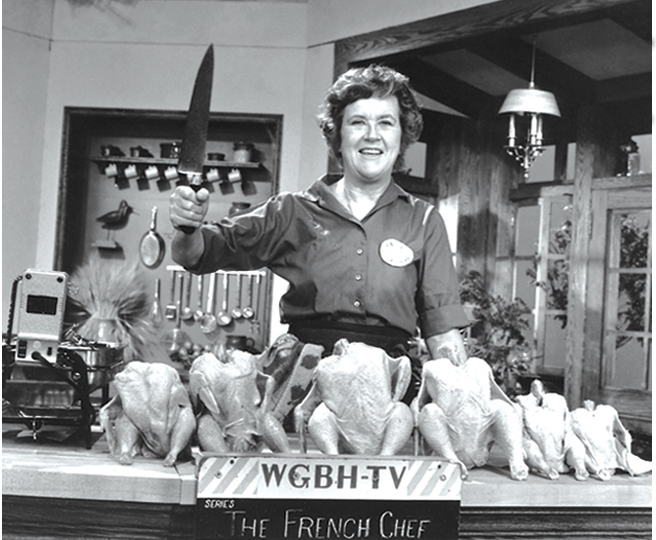 Julia Child poses with "the chicken sisters" before an episode of The French Chef in which she teaches us how to roast a bird.

It seems almost sacrilegious to question the wisdom of Julia Child.

First with her opus Mastering the Art of French Cooking and later with her PBS cooking show, the unflappably cheerful Child helped rescue home cookery from the clutches of convenience food. She taught us how to love — and take pride in — making something from scratch.

And yet, in at least one important kitchen skill, Child got it dead wrong: rinsing raw poultry.

"I just think it's a safer thing to do," Child tells viewers in one clip from The French Chef in which she shows us the ins and outs of roasting chicken.

Ms. Child got many, many things right. Washing her birds before cooking was apparently not one of them.

"Oh, no!" says Drexel University food safety researcher Jennifer Quinlan when I inform her that Child was in the pro-bird-washing camp. "I don't want to take on that."

Yet take on the doyenne of TV chefs she must. For Quinlan is on a mission to get America's home cooks to drop this widespread habit of washing poultry before cooking.

That's because washing increases the chances that you'll spread the foodborne pathogens that are almost certainly on your bird all over the rest of your kitchen too, food safety experts say. We're talking nasty stuff like salmonella and Campylobacter, which together are estimated to cause nearly 1.9 million cases of foodborne illness in the U.S. each year.

Some studies suggest bacteria can fly up to 3 feet away from where your meat is rinsed — though you can't necessarily see it. If that thought alone doesn't give you pause, perhaps this slimy "germ vision" animation will do the trick:

But fear not: All you have to do to kill these unwanted bacteria is to cook your meat properly (a thermometer can help — chicken needs to reach an internal temperature of at least 165 degrees Fahrenheit) and keep your utensils and cooking surfaces clean.

Quinlan and her collaborators at New Mexico State University's Department of Media Productions have created a new public health campaign to get the word out about why washing poultry is a bad idea. Her focus-group surveys, conducted as part of a research project funded by the U.S. Department of Agriculture, suggest as many as 90 percent of people rinse their raw birds — even though the USDA has advised against it for years. The practice is slightly more common among minorities, she says, but pretty much everyone does it.

And Quinlan expects some people will continue to cling to their bird-rinsing ways. Some people, she notes, just do it because they think their chicken is slimy. "If your chicken is so slimy that it needs washing, something is wrong," she says. "Other people say, 'That's just how I was taught to do it.' "

It doesn't help, she says, that many celebrity TV chefs (not just Child) and cookbooks call for this as a first step. But science, says Quinlan, is really giving the lazy a free pass — nay, an imperative — to cut out this step.

And some people for whom raw-chicken-meat baths have been a source of marital strife may welcome Quinlan's message wholeheartedly.

As my colleague Dan Charles told me (sorry, Dan, I'm outing you here): "I never did [wash my chickens], but then my wife* forced me to. So as soon as this thing is posted, I'm sending it straight to her."

* Footnote: Dan insisted I note his wife is lovely.