Accessibility links
Turning Off The Spigot In Western Kansas Farmland : The Salt If Kansas farmers keep pumping water out of the High Plains aquifer as they have in the past, the amount of water they can extract will start to fall in just 10 years or so, scientists predict. That will cause big changes in the agricultural economy. But reducing water use now could help delay and ease that disruption. 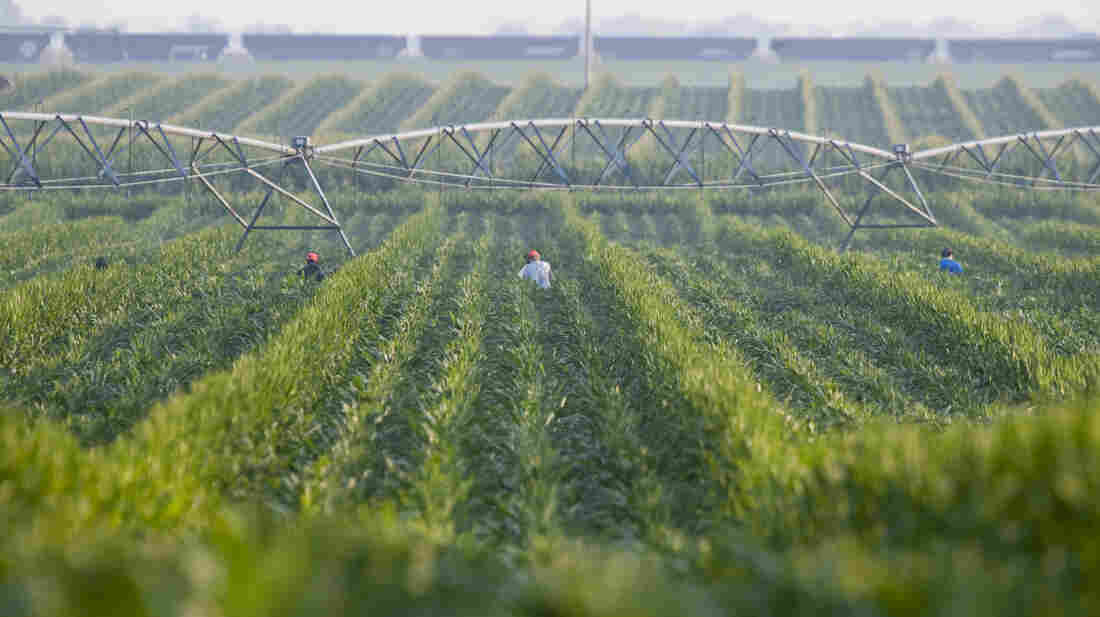 An irrigation pivot waters a corn field in Nebraska. Many farmers in Nebraska and Kansas rely on irrigation to water their corn fields. But the underground aquifer they draw from will run dry. Nati Harnik/AP hide caption 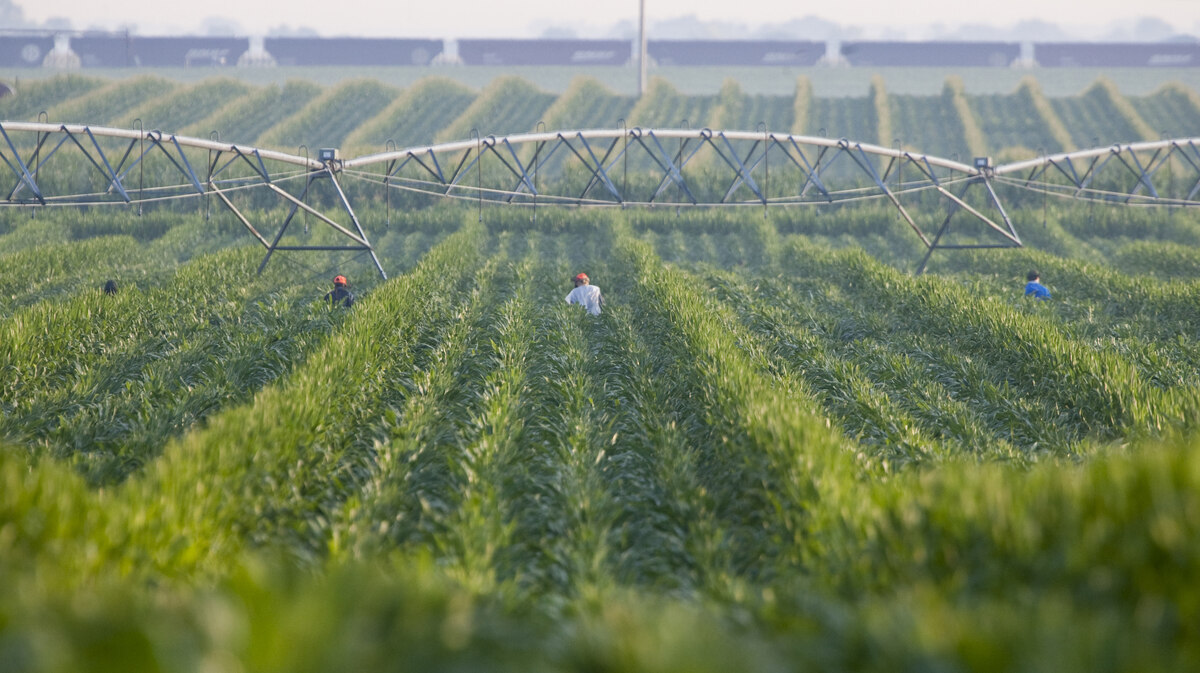 An irrigation pivot waters a corn field in Nebraska. Many farmers in Nebraska and Kansas rely on irrigation to water their corn fields. But the underground aquifer they draw from will run dry.

Across the High Plains, many farmers depend on underground stores of water, and they worry about wells going dry. A new scientific study of western Kansas lays out a predicted timeline for those fears to become reality. But it also shows an alternative path for farming in Kansas: The moment of reckoning can be delayed, and the impact softened, if farmers start conserving water now.

David Steward, a water expert at Kansas State University, says that he and his colleagues started this research project with a specific kind of person in mind: "The family farmer who's trying to see into the future, and trying to pass on his or her land to their grandchildren."

Farmers in western Kansas have good reason to worry about the future. They know that big irrigated fields of corn in this part of the country are taking water out of underground aquifers much faster than rain or snow can fill those natural reservoirs back up.

Steward decided to come up with better estimates for how soon the aquifers will go dry and how that will affect farmers. He got together with experts on growing corn and raising livestock. "We were trying to provide a little bit better glimpse into the future, so that people would have a better idea how to plan," he says.

According to their calculations, if Kansas farmers keep pumping water out of the High Plains aquifer as they have in the past, the amount of water they're able to extract will start to fall in just 10 years or so. They'll still be able to continue harvesting more corn for another generation, though, because technology — better irrigation systems and genetically improved corn — will let them use that water more efficiently.

But after that, even the latest technology won't save the corn fields. Irrigated fields will start to disappear, followed by cattle feedlots. The long expansion of agricultural production in western Kansas will end.

Yet Steward and his colleagues also lay out some alternative paths that the farmers of Kansas could take. For instance, if farmers reduced their water use by 20 percent right now, it would take a big bite out of their corn production, but production then would resume growing. It wouldn't peak until 2070, and then it would decline much more gradually. "If we're able to save as much water as possible now, the more we save, the more corn we'll be able to grow into the future," Steward says.

These predictions appear in this week's issue of the Proceedings of the National Academy of Sciences.

The exact numbers are new, but the issue of water conservation is a familiar one in western Kansas. Thirty years ago, local governments in several parts of the region set up groundwater management districts — essentially, committees for discussing ways to attack the problem.

Mark Rude, executive director of the groundwater management district for southwest Kansas, says that discussion can turn emotional "because there's nothing more fundamental to the local family farm than the water supply."

At the same time, he says, the families on those farms are worried about the future. They want their grandchildren to have plenty of water, too.

Rude says, in his district, they've discussed lots of alternatives for how to reduce water use: cuts in irrigated acres; cuts in the amount of water used on each acre. But it's mostly talk so far, rather than action, for a very practical reason. His agency may not have the legal authority to force farmers to cut back on their water use.

Those farmers own rights to water the way they own land. Any rule that tries to restrict that right could be challenged in court. "The last thing people really want to see is simply a whole lot of court cases," Rude says.

The groundwater management districts have been trying to avoid that outcome by coming up with plans everyone can support.

There's a model for this. In one small area in northwestern Kansas, farmers have agreed to use 20 percent less water for the next five years. "It's an experiment, and a lot of people are watching that," Rude says. "And of course, that figures prominently in the conversations about, 'If we were going to do it, how would we do it?' "

If they can't come up with a plan for cutting water use, of course, eventually the natural laws of hydrology will step in. Farmers will use less water when the wells go dry.