Accessibility links
The Latest Frontier In Gourmet Salt, From The Lowest Point On Earth : The Salt Spas and beauty products have long touted the health benefits of floating in the buoyant Dead Sea waters and slathering its thick black mud on your skin. Now an Israeli company is promoting Dead Sea salt as a healthful gourmet product, in part because of its high mineral content.

The Latest Frontier In Gourmet Salt, From The Lowest Point On Earth

The Latest Frontier In Gourmet Salt, From The Lowest Point On Earth 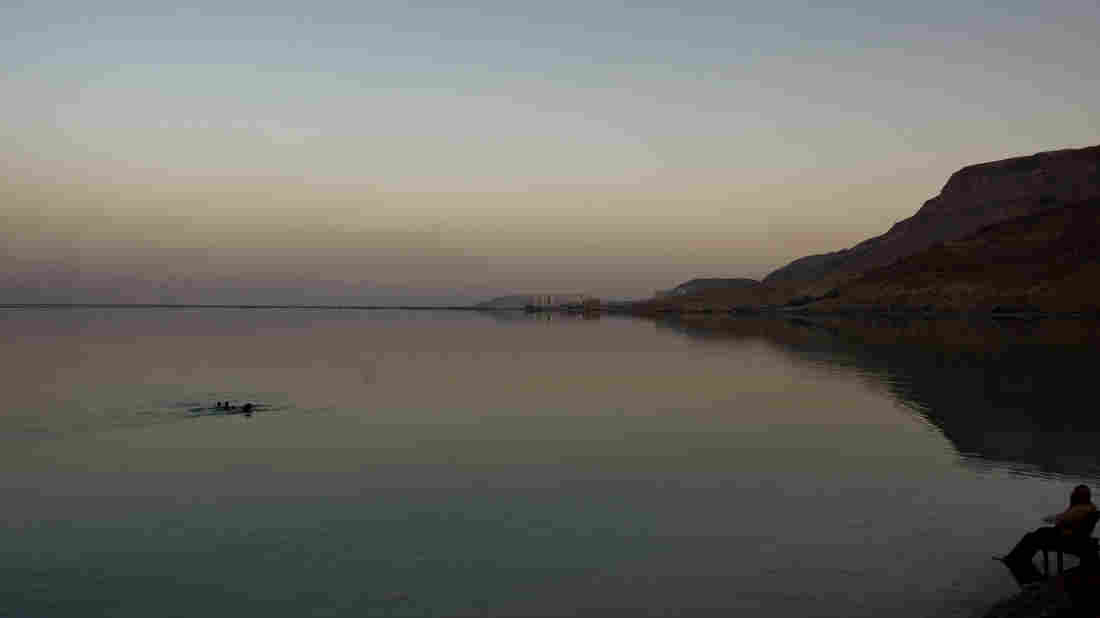 An Israeli man bathes in the Dead Sea. Spas have long touted the health benefits of the Dead Sea. So does Naked Sea Salt. Sebastian Scheiner/AP hide caption 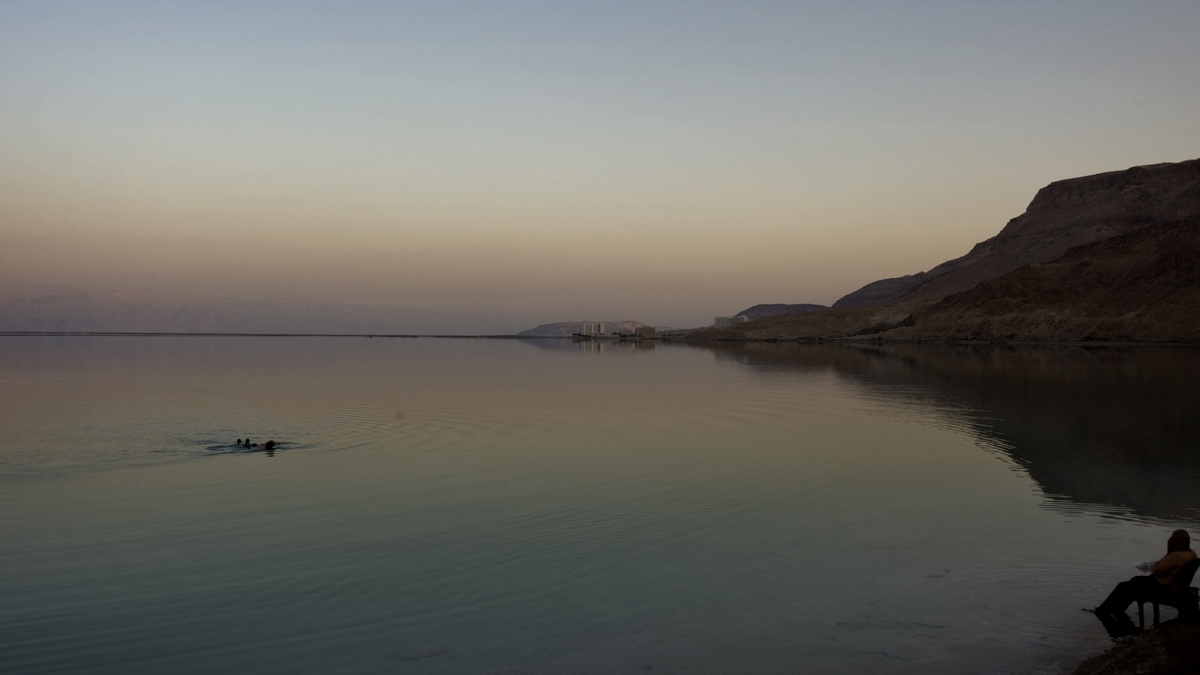 When you go to the Dead Sea for a float in its extraordinarily buoyant waters, signs warn you not to drink a drop. "Did you swallow water?" one Dead Sea do's and don'ts list asks. "Go immediately to the lifeguard."

I've never sipped the stuff, but on one visit — it's less than an hour's drive from Jerusalem, between Israel, Jordan and the Israeli-occupied West Bank — I did pry several chunks of salt off an encrusted rock along the shore and took them home in a plastic cup. I thought they might grind up nicely and add an exotic taste, plus an interesting conversation piece, to our table.

But one big lick changed my plans. The salt burned my tongue a bit, like the Dead Sea water does to cuts on your body when you're floating. My casually harvested chunks also left a bitter aftertaste at the back of my throat.
So when I heard about someone marketing Dead Sea salt as a gourmet specialty, I was curious. It turns out that Israeli entrepreneur Ari Fruchter's salt from the Dead Sea is different. 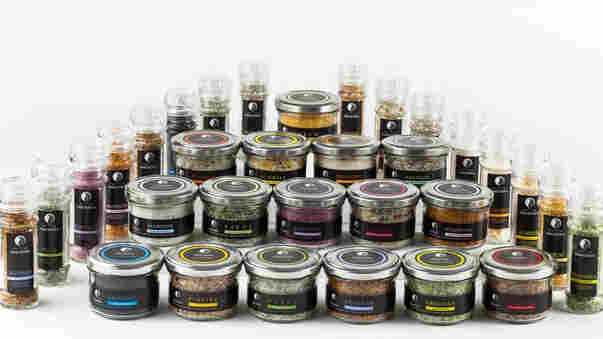 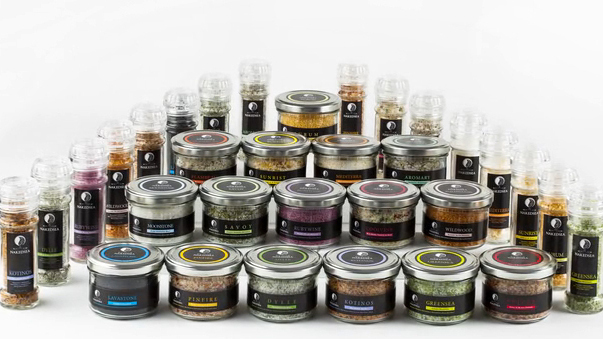 Naked Sea Salt offers an array of flavored salts, including garlic and ginger, sweet orange and chili, even carbon.

He buys the basic salt from a Palestinian company, West Bank Salt, that's been in the business for decades. Dead Sea brine is pumped into ponds. Eight months of evaporation leaves rock salt crystals that can be milled for food. West Bank Salt recently began providing salt to another Israeli businessman, who flavors and packages it for local markets.

Fruchter discovered this product early in his research (when he was still trying to figure out if Dead Sea salt was edible) and joined in. He created Naked Sea to market Dead Sea salt as a gourmet product internationally and direct to consumer through online specialty food sites. Naked Sea's flavors include garlic and ginger, sweet orange and chili, even carbon.

"I'm crazy about sushi, so I mix that with rice," he says. "That's fantastic. And I always put the Merlot salt on steak."

Fruchter recently left a high-tech career to enter the world's growing specialty salt market. He branded his stuff Naked in honor of a controversial art project — hundreds of nude people photographed in the Dead Sea — that he did with photographer Spencer Tunick two years ago. Over the four years of preparing that project, Fruchter faced political pressure from conservative religious political leaders and a local partner who pulled out of all logistic management at the last minute.

"I was almost dead afterward, it took so much out of me," Fruchter says. "And I realized that by virtue of what I did, I became one of the biggest Dead Sea evangelists in the world."

Fruchter first became aware of how unique and fragile the Dead Sea environment is during the photography project. He plans to support environmental research with a percentage of salt sales.

The Dead Sea is the lowest place on Earth. And it's getting lower: Water levels are receding, worrying many environmentalists, as well as spa owners, whose businesses tap into beauty products made from Dead Sea minerals and mud.
Bath and beauty products from the Dead Sea have always touted health benefits. So does Naked Sea Salt.

"Salt from the Dead Sea contains 32 different minerals, 21 of which are uniquely concentrated in this salt, in higher levels than in any other," the company says in marketing materials. "All of these are important to your body. Minerals like: magnesium, calcium, iron, potassium, manganese and zinc."

But nutrition scientists say the claimed benefits of higher levels of even important minerals should be taken with a big grain of you-know-what.

Most sodium people eat — about 70 percent — comes from hidden salt in processed food, says Richard Wood, a professor of nutrition at the University of Massachusetts, Amherst. The rest is from naturally occurring sodium. Just a bit in our diets comes from the shaker.

Even if someone ingested the maximum amount of sodium a body could take in one day exclusively from Naked Sea Salt, Wood calculates that the amounts of potassium, calcium, magnesium and other important minerals would be too low — often less than 1 percent of the recommended daily allowance — to make any difference to a person's health.

"Either very minimal, or uncertain," says Wood, who based his analysis on a lab report Naked Sea got of its salt's mineral content.

But one reason there are higher mineral concentrations is because Dead Sea salt has less sodium than regular table salt — almost half as much.

Oh, and there's one more mineral in Dead Sea salt that I should note: bromide, which Naked Sea mentions in its FAQ. Bromide is a mineral that occurs naturally in ocean water, and at much higher concentrations in the Dead Sea — thousands of parts per million versus 65, says Mokoto Mukai of Cornell University's Department of Food Science. Bromide can potentially cause health problems, although Mukai notes that an average adult can safely consume about 24 milligrams a day.

Naked Sea's Fruchter says consumers shouldn't worry: The bromide, he says, is separated from the salt crystals in the harvesting process and doesn't show up in the chemical analysis of the final product.

Although Naked Sea Salt aims to grow into a profit-making business, Fruchter is raising money on Kickstarter to help fund the first full-scale production run and start selling, directly to consumers, in the U.S. He says the crowdfunding is both a way to expand people's knowledge about the Dead Sea and to test the market for edible products from its waters.