Accessibility links
Dumplings Taste Better When Filled With Memories : The Salt Just about every culture has dumplings. For the Polish, it's pierogi, and as Morning Edition editor Renita Jablonski writes, this little dumpling plays a big role for many Polish-Americans in preserving and celebrating their heritage. 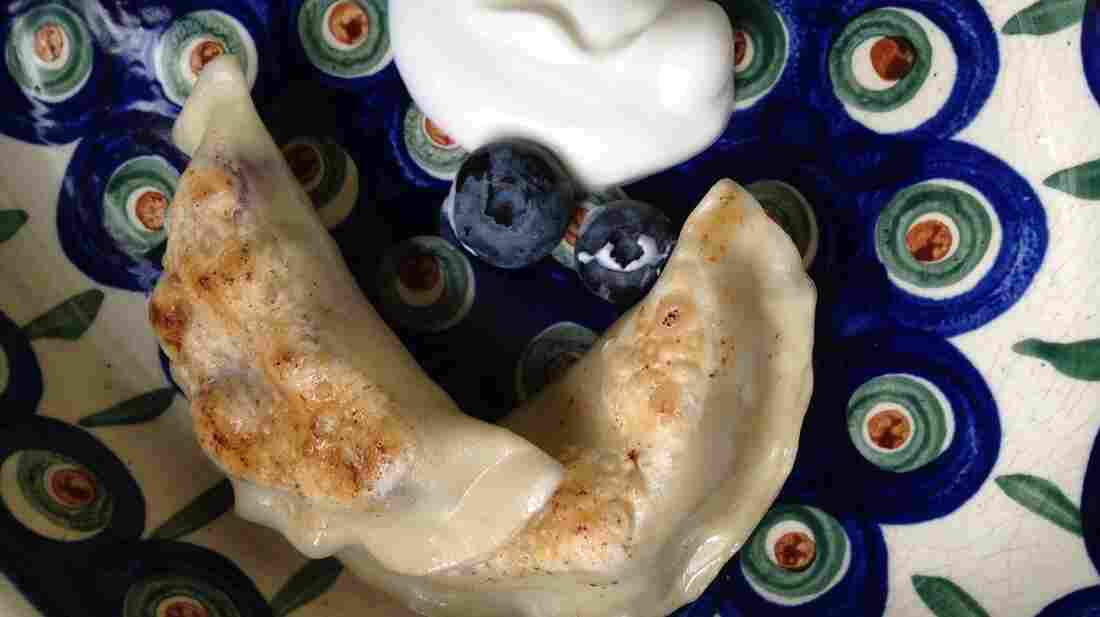 Just about every culture has a dumpling. For many immigrants and first-generation Americans, dumplings serve as a delicious taste of home and heritage. Pierogis are the Polish take on the form. Allison Aubrey/NPR hide caption 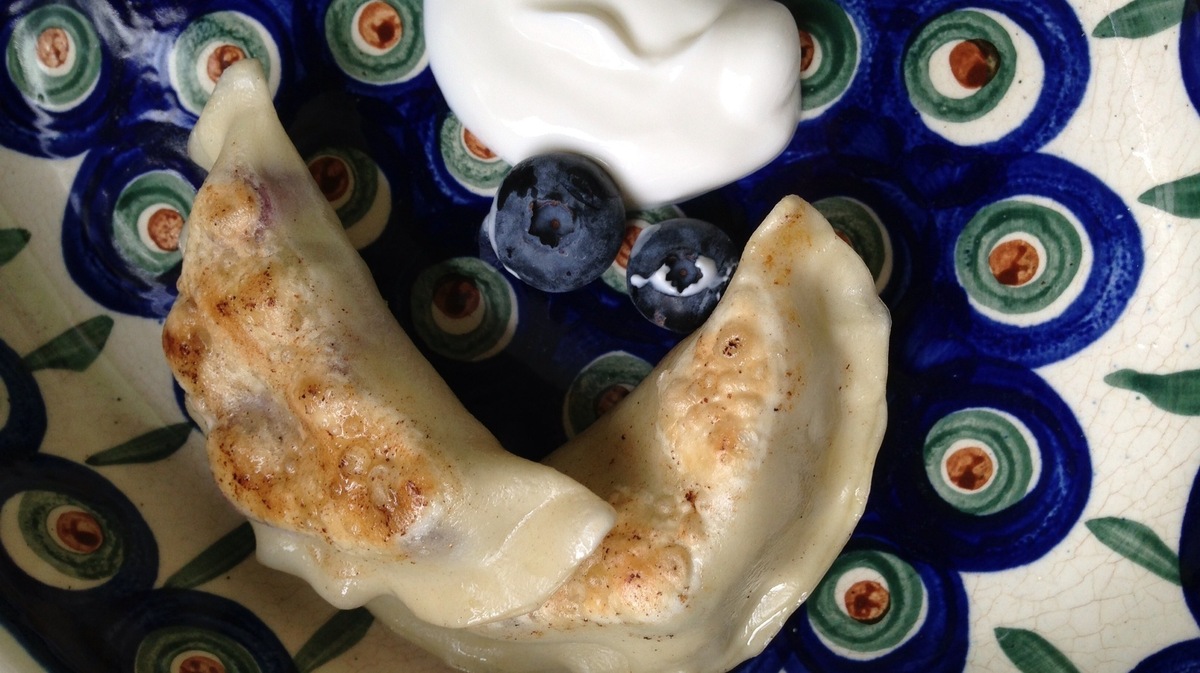 Just about every culture has a dumpling. For many immigrants and first-generation Americans, dumplings serve as a delicious taste of home and heritage. Pierogis are the Polish take on the form.

Most kids leave Santa cookies. My brother and I would try to bribe him with an extra treat: a couple leftover pierogi from our Christmas Eve dinner.

Instead of sugar plums, pierogi danced in my head. And while I never admitted it in my letter to Santa, I was an accomplished pierogi thief. While they were kept warm on the stove ahead of our guests' arrival, I could lift the cover to the pan that cradled them without making a sound, liberating one to scarf down before my Polish mother walked back into the kitchen. My lips gleamed with a mix of butter and Bonnie Bell lip gloss.

I don't pilfer pierogi ahead of dinner anymore. I recognize now that everyone should get an equal taste of this dumpling joy. And I now savor each bite, especially the bites where the edges have become perfectly crisp.

Like chef Marta Mirecki in Allison Aubrey's Morning Edition story (you can hear the story by clicking on the audio above), I am a first-generation Polish American. While I have adored pierogi since I can remember, my heightened appreciation didn't happen until I actually started to help my mom make them. My arms were sore for days after the first time.

It turns out a rolling pin and pierogi dough can rival any upper-arm workout. The dough needs to be rolled thin so it doesn't overpower the precious filling inside. There's nothing fast about the pierogi process. Once the dough is perfectly rolled out, it's time to grab a drinking glass, flip it over and use the rim to cut out circles. Those circles come to embrace the perfect kiss of filling — the possibilities are endless.

Mashed potatoes and cheese? Of course. 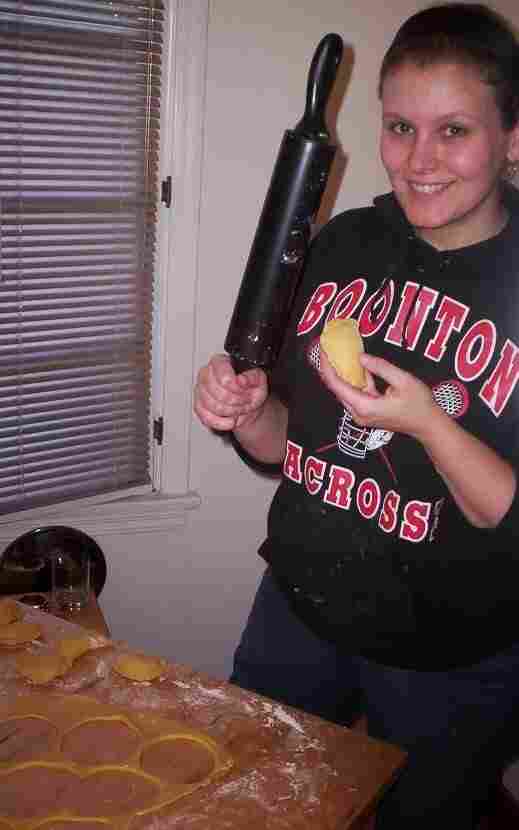 Sauerkraut and mushrooms? You had me at sauer ...

The trick is to plop down just the right amount of filling so that the circle folds into a half-moon with enough room to pull, pinch and seal the edges together into a lovely ruffle. And then one by one, they are lowered into boiling water. I always loved that the pierogi let you know when they're ready by floating to the top.

The perfect pierogi finish usually means frying them up in a little butter (or a lot). Sautéed onions or bacon can be a nice touch. A sweet filling of fruit can be heightened with a sprinkle of sugar.

I wish I could offer a recipe at this point, but it really resides in my mom's head. When I make pierogi on my own, I end up calling my mom at least five times. My questions to her are posed half in Polish, half in English. By the third call my sleeves are covered in flour.

Luckily, Marta Mirecki has a wonderfully detailed recipe for her babcia's (grandma's) pierogi, which you can find below.

My own daughter is due to arrive any day now, and I realize it's time to have my family's recipes better preserved. Like Mirecki, I spent my childhood deeply immersed in Polish culture. From age 5 to 17, I attended Polish school every Saturday morning where I studied the language and performed in a Polish folk dance group. I marched proudly in various Cleveland parades wearing colorful traditional costumes, my head adorned with floral wreaths. I was lucky to spend a couple of childhood summers in Poland with my mother's family.

When she is old enough, I will share photos of this past with my daughter. I can't wait to take her to visit my Ohio hometown, where she can hear me speaking my first language with my parents. But she will be removed by generations and geography from that rich Polish culture I grew up with.

And so pierogi have become so much more than one of my favorite foods. As with so many Americans with ties to other countries, for me, a simple dumpling is a connection to the past, and one of the only tangible (and oh so tasty) things left to pass along to future generations.

2 cups sifted flour, plus extra for dusting and kneading

Step One: Mix the Dough

Combine flour and salt in a large bowl.

Beat egg lightly and mix into flour with a spatula. Add water, starting with 1/2 cup.

Once the dough comes together, turn out onto a lightly floured surface and knead gently for a few turns. Add flour as needed.

To knead the dough by hand: Form the dough into a ball. Smush the ball down with your palm pushing away from you, then reform the ball and continue smushing down on it. Add flour a little at a time as needed, and use your dough scraper to loosen the dough from the work surface if it starts to stick. If at any time the dough gets too springy, then cover it with a cloth and let it rest for about 10 minutes. Continue kneading until the dough is even and smooth.

To roll the dough by hand: Roll the dough as thinly as you would like with a rolling pin. Flour the rolling pin, dough and work surface just enough to keep everything from sticking. Cut the dough into rounds using a round cutter or drinking glass. Gather up the dough scraps and roll and cut rounds a second time. Don't roll out the same piece of dough more than twice, though.

To roll the dough with a pasta machine: Cut the dough in half or thirds and cover the portion you're not working with. Set the rollers one setting smaller and pass the dough through. Continue rolling the dough thinner, one setting at a time. Do not fold the dough, and do not pass more than once per setting. Roll the dough as thin as you would like. A middle roller setting is good, such as setting 5 on a machine that goes to 9. Cut the dough into rounds using a round cutter or drinking glass. Gather up the dough scraps and roll and cut rounds a second time. Don't roll out the same piece of dough more than twice, though.

Keep a small cup of water, a small pile of flour (a teaspoon or two), and a small towel handy. Using a small spoon, pile about a teaspoon of filling slightly off-center. Wet your finger with water and run it along the edge of the round. Fold the dough over the filling and press it shut with your fingers. If you just wet the edge of the dough and it will not seal, then dry your finger, dip in a little flour and run that along the edge. Wipe your fingers clean of flour and filling as you go. Any filling that you get on the outside of the dough will not come off when you boil the pierogi.

When sealing the pierogi, be mindful of a few things:

Any of these can cause your pierogi to break open when cooking.

Once the pierogi are filled and sealed, dust with a tiny amount of flour and brush off as much as you can. Lay on a parchment lined sheet while you finish a few more.

Gently lower the pierogi into a pot of boiling water with about a tablespoon of oil. Don't crowd the pot and don't boil the pierogi hard; they should simmer gently. Boil them for a few minutes--the exact time will depend on how thick you rolled your dough, so test one by itself first to get the timing right. Once the pierogi float they are almost ready.

Remove the boiled pierogi with a slotted spoon and drain for minute or so in a colander. If serving right away, turn them with a little oil or melted butter before piling in a bowl or on a serving plate.

Make your pierogi filling ahead of time and refrigerate. The filling will be easier to handle if it's cold. Also you will go crazy if you try to make the filling and fill pierogi on the same day. Babcia may have done it that way, but she had years of practice.

Enlist a cooking buddy! Making pierogi is so much easier and more enjoyable when it's a team effort.

Pierogi puff up a little when cooked, so keep that in mind when choosing what size to make them.

While there's nothing wrong with using a drinking glass to cut your pierogi, consider buying a set of round cutters. The variety of sizes will be very handy when you are deciding what size to make your pierogi.

Make one or two pierogi completely from start to finish. Check for your filling's seasoning, the thickness of the dough, and the pierogi's overall size after they are cooked.

If your enthusiasm flags and you still have dough left, you can wrap it tightly in plastic wrap and refrigerate for up to two days. Bring the dough to room temperature before rolling it out.

one stale roll or several pieces of stale bread