Accessibility links
Don't Panic! Your Questions On (Not) Washing Raw Chickens : The Salt Our story on the food safety risks posed by rinsing raw birds — a step advocated by many chefs and cookbooks — inflamed passions and prompted many questions. Here, we tackle some of your most frequently raised concerns. 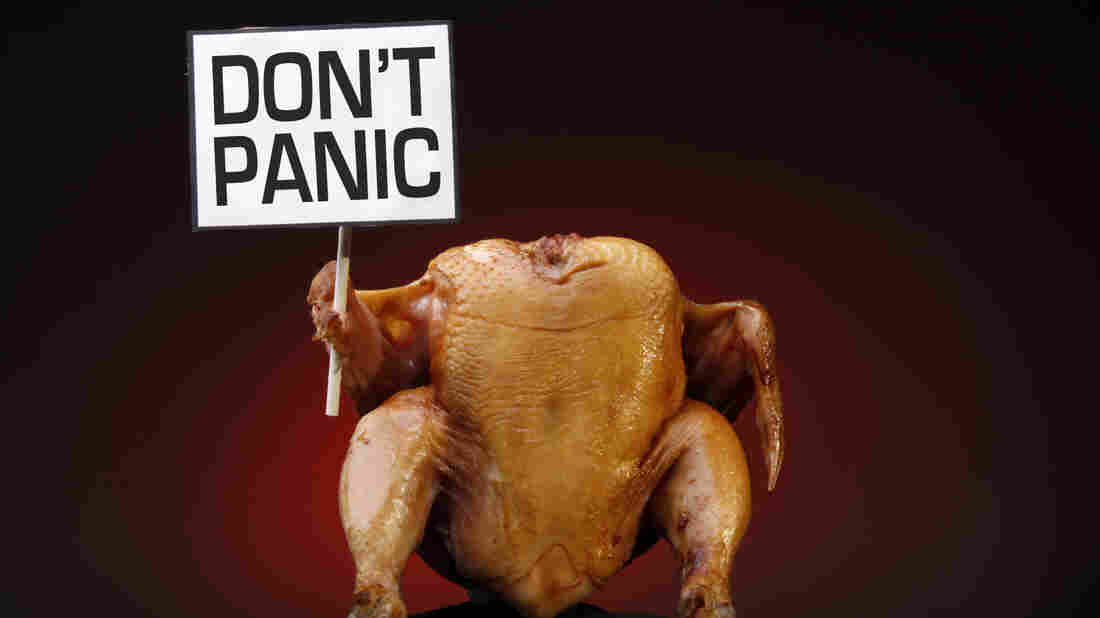 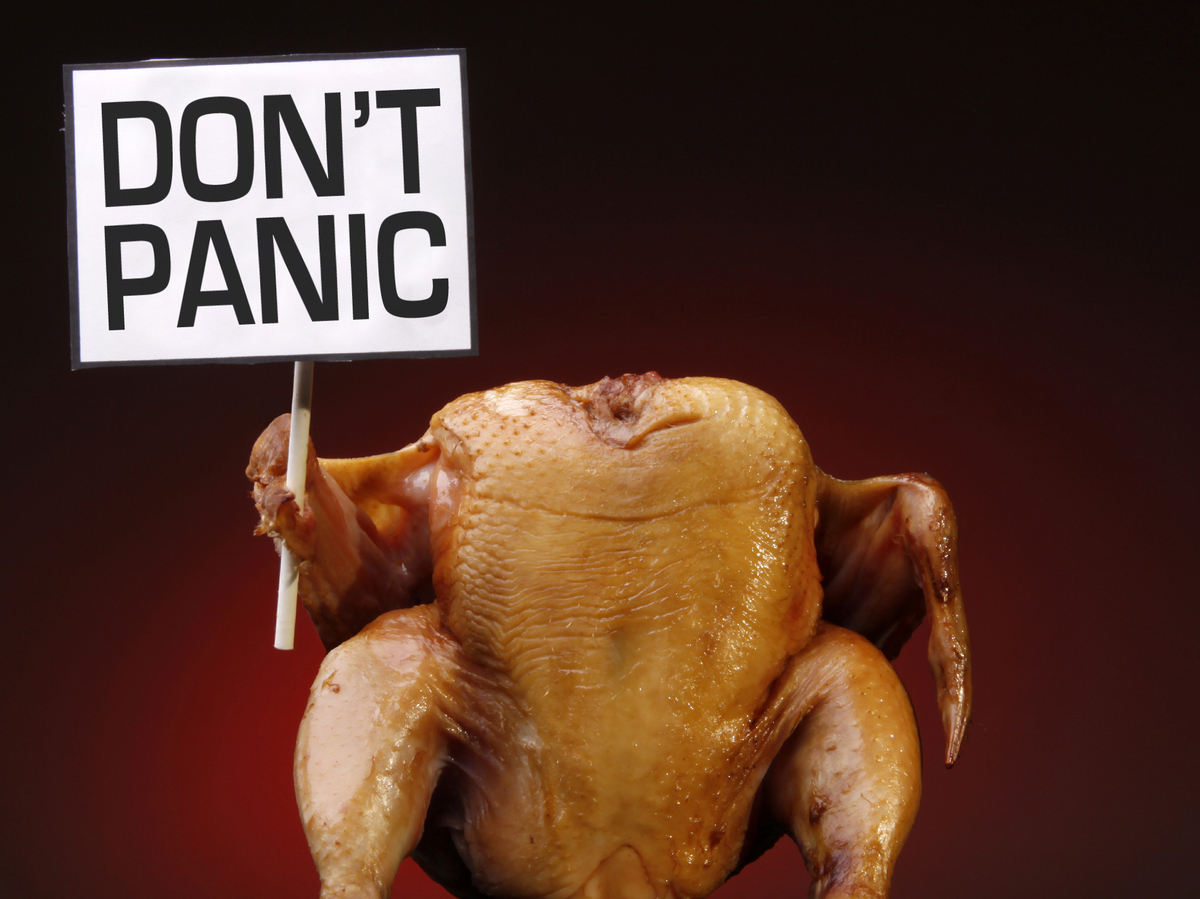 Without meaning to, I seem to have sparked a "small #chickensh*tstorm," as food writer Michael Ruhlman put it, with my recent post about why you shouldn't wash your raw poultry. The strong, even vituperative responses to the post surprised me. I didn't anticipate that Americans would be quite so passionate about poultry hygiene.

To be absolutely clear, the advice not to wash your chickens is longstanding. The U.S. Department of Agriculture has been cautioning against the practice for many years, and food safety experts widely agree it's a bad idea, because it raises the risk of spreading dangerous bacteria found on raw poultry all over your kitchen. As we told you before, food safety researchers say cooking your bird until it reaches an internal temperature of at least 165 degrees is the only thing you have to do to kill the bacteria found on raw birds.

Still, chicken washing is a part of most people's kitchen routine — including top chefs, many of whom recommend the practice in their TV shows and cookbooks. (My story used Julia Child as a famous example — though Jacques Pepin, we should note, publicly questioned his good friend Child on the value of this habit.) And from comments on The Salt and elsewhere on the Internet, it's clear that many of you still have questions about what to do with your raw birds — or are just downright resistant to dropping the rinsing habit.

So, in an effort to clear the confusion and tamp down any panic, I've asked food safety researcher Jennifer Quinlan of Drexel University to help tackle some of the most frequently asked questions. Seriously, folks, there's no reason to freak out.

Is it safe for me to marinate, brine and/or kosher poultry before cooking to enhance the flavor?

Of course. Go ahead and prepare the chicken whichever way you like, Quinlan says, but be aware that any liquid you use — be it a marinade or whatever — will then be contaminated with dangerous bacteria. Treat it as such. Use the basic rule of "separate, don't cross contaminate." In other words, use the same common-sense precautions that apply whenever you handle raw meat.

I rinse or marinate my chicken in a lime/lemon/or vinegar juice wash. Doesn't that kill the bacteria that might splash off the bird?

No, there's no reason to think that adding a bit of acid to your water will kill the pathogens present either in the rinse or on the chicken, Quinlan says. Marinate for taste, if you like, but not for safety. And treat the rinse or marinade as a contaminated product — throw it away with caution.

What if I run the faucet water very slowly when rinsing my chicken, and I always disinfect my countertops and kitchen sink thoroughly with bleach afterward? I should be fine, no?

Food safety researchers haven't really defined a "safe water speed" for rinsing raw poultry. Any time you introduce water or a rinse, you are disturbing the bacteria on the raw poultry and making it likelier that those buggies will fly off your meat and onto some other kitchen surface — or onto you. "I can't make you not take the risk, " Quinlan says, "but you need to know what you are dealing with." If you rinse your chicken out of safety concerns, just stop, she says, because you are making it less safe. If you are doing it to enhance flavor, that's fine, but use proper precautions.

Sometimes my chickens come with gross bits — specks of blood and whatnot — or they seem somewhat slimy after I've removed the giblets from inside. I know you say I shouldn't, but I can't imagine NOT rinsing the chicken in these cases, so I'm just going to keep on doing it.

"Try it once and see if it really makes a difference," Quinlan says. "And if you don't notice a taste difference, then all that time you spend washing and sanitizing — ask yourself why you're really spending time doing that."

Quinlan says some people have told her they rinse to remove the taste of chlorine from their birds. If that's the case, she says, "you need to change where you're getting your chicken." A chlorine smell, she says, might mean a bird was dunked in the stuff to make it last longer — so stay away from that butcher or vendor.

If I don't rinse the slime off chicken before I cook it, the meat will be too moist to brown properly. If I can't rinse the bird, what should I do?

"If that's really an issue, just take a dry paper towel and blot it off," Quinlan says. (This is one piece of Julia Child's poultry advice that you can safely follow, she says.) Wiping is better than rinsing, she says, because it doesn't agitate the bacteria on the bird in the same way.

Does this advice just apply to poultry? What about red meat or fish?

Yes, the same risks and cautions apply when it comes to rinsing meat, pork or fish, Quinlan says.

This is silly: If the problem with washing a chicken is that the splashing water gives bacteria a chance to hitch rides on water droplets, isn't it just as risky for me to wash my hands in the sink after handling the chicken?

"The difference is that you can't cook your hands — and soap and water really will wash most of the bacteria off of you," Quinlan says. The bacteria that ends up on your hands after handling raw poultry is just a tiny fraction of what's found on the bird itself, she says. "If you've thoroughly washed your hands for 20 seconds with warm water and soap, that should do the trick."

Conventionally raised chickens may come covered in dangerous bacteria, but I only buy organic chickens, so they've got to be safer, right?