Accessibility links
Tlacoyos: A Mexican Grilled Snack That Tempted The Conquistadors : The Salt Tlacoyos are a doughy corn tortilla of sorts that's cooked on a grill. Whether enjoyed on a plastic plate as street food or fine china in a high-end restaurant, it's been a favorite snack for centuries.

For the last in a summer series of grilled food from around the world, we head to Mexico, where a small doughy treat is found everywhere from street corner grills to high-end restaurants. It's called a tlacoyo (pronounced tla-COY-yo) and although it may sound novel, it's an ancient food that's older than Hernan Cortes.

To taste the best tlacoyos, I was told I had to go to Xochimilco, the sprawling suburb in southern Mexico City. Juana Pina Gonzales has been selling them in the region for 25 years. She only uses blue corn masa — the dough used to make a tortilla — and stuffs the dough with all kinds of fillings, including smashed pinto or fava beans, a potato puree, mushrooms or a light cheese similar to ricotta. 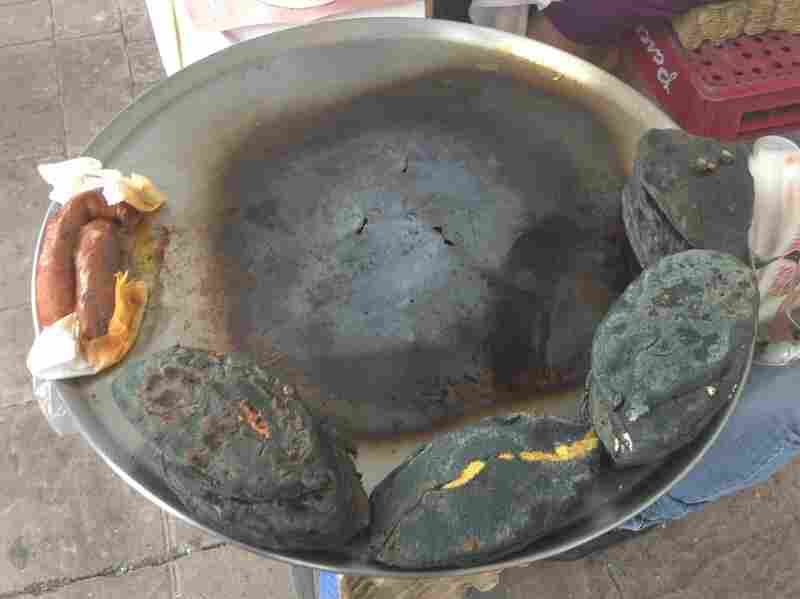 Tlacoyos can be filled with beans, potatoes, mushrooms or cheese and are often topped with grilled cactus, onions, cilantro, and salsa. Jasmine Garsd for NPR hide caption 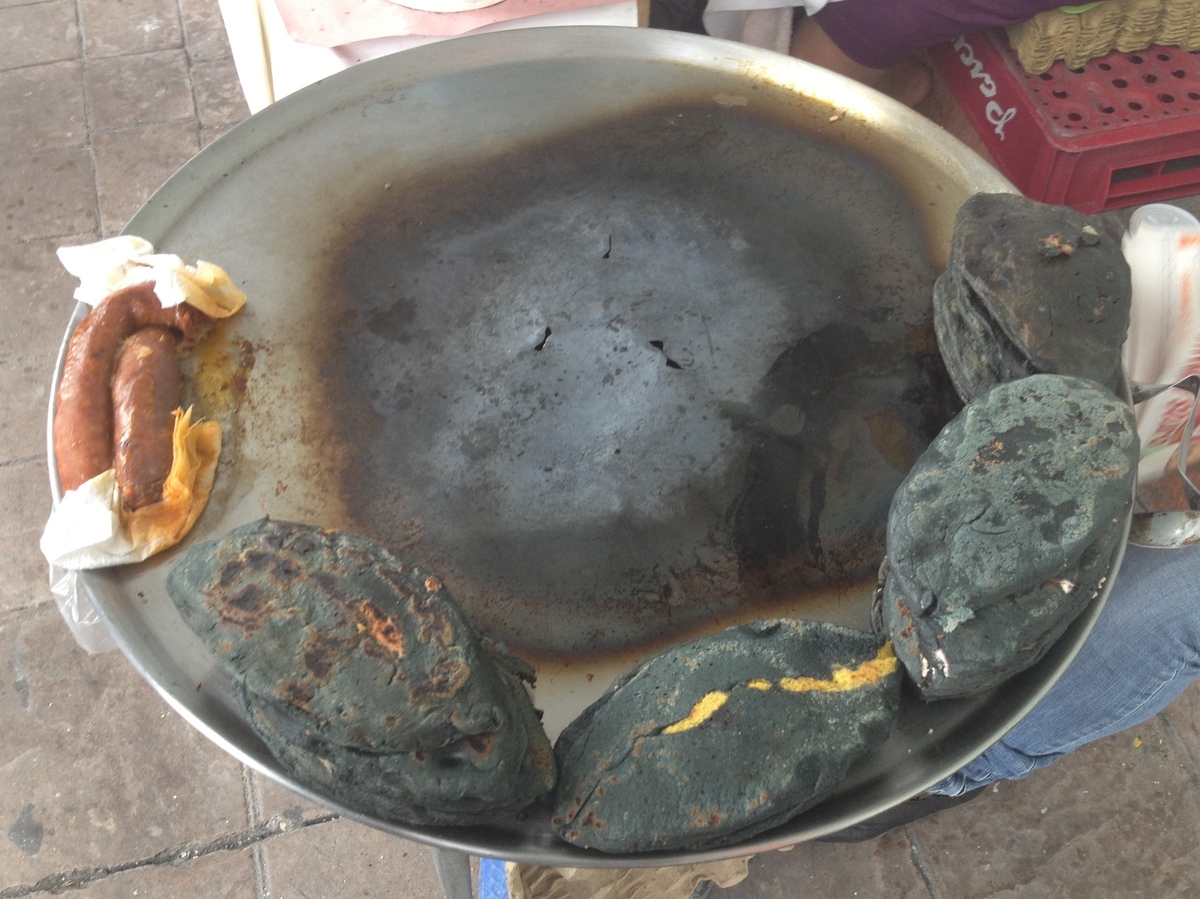 Tlacoyos can be filled with beans, potatoes, mushrooms or cheese and are often topped with grilled cactus, onions, cilantro, and salsa.

Once filled, she shapes them into a small oval with pointed ends so they look like little footballs, grills them on a hot comal — a smooth round griddle — then wraps them in cloth towels before she puts them in big wicker baskets and heads to the market.

She says she usually sells all 40-50 dozen she's made in about four hours. While Pina's are still warm out of the basket, I really wanted one hot off the grill. So I headed to the market's open food court, where a roving guitarist serenaded customers sitting on rickety benches around a dozen small food stalls. Each is equipped with a large hot grill teaming with all types of Mexican antojitos, or snack food; quesadillas, tacos and of course, hot steamy tlacoyos.

Isabel Salazar Cabrera claims her tlacoyos are the best and original, because her mom was the first to ever sell tlacoyos in Xochimilo. She says they're the best because of the way she cooks the bean filling, but can't share the recipe since it's a family secret. 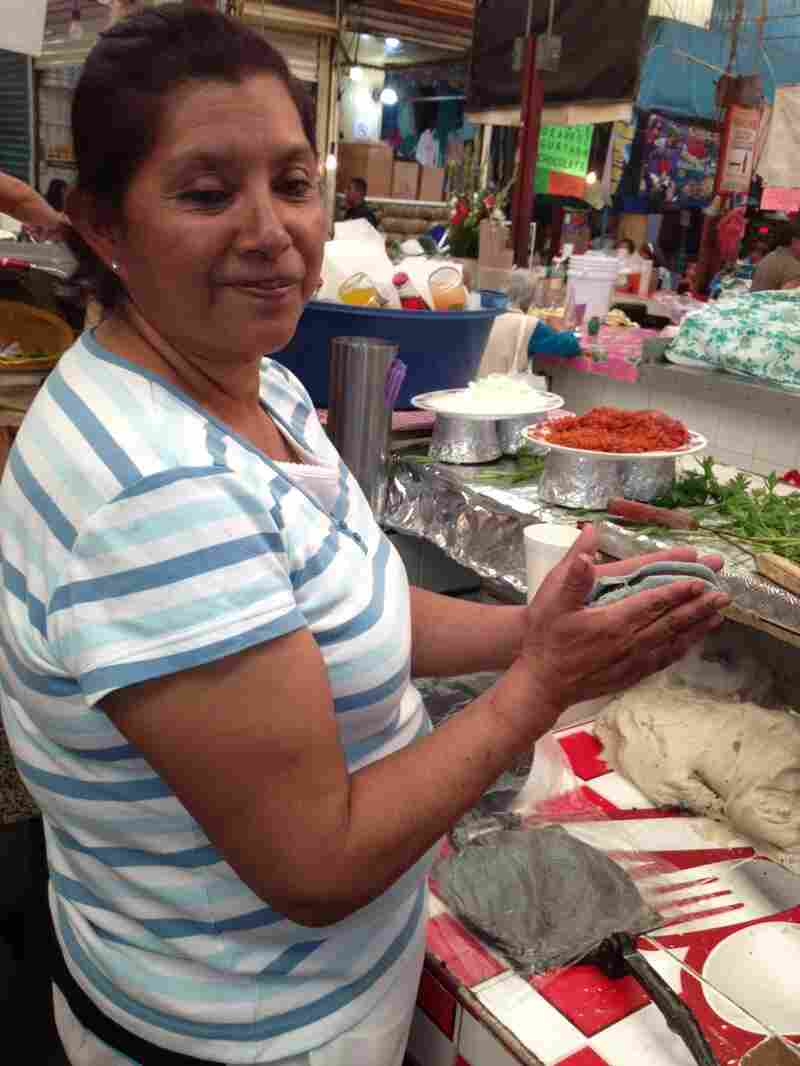 Isabel Salazar Cabrera says her tlacoyos are the best because of the way she cooks the bean filling. She says her mom was the first to ever sell tlacoyos in Xochimilo, a suburb in southern Mexico City. Carrie Kahn for NPR hide caption 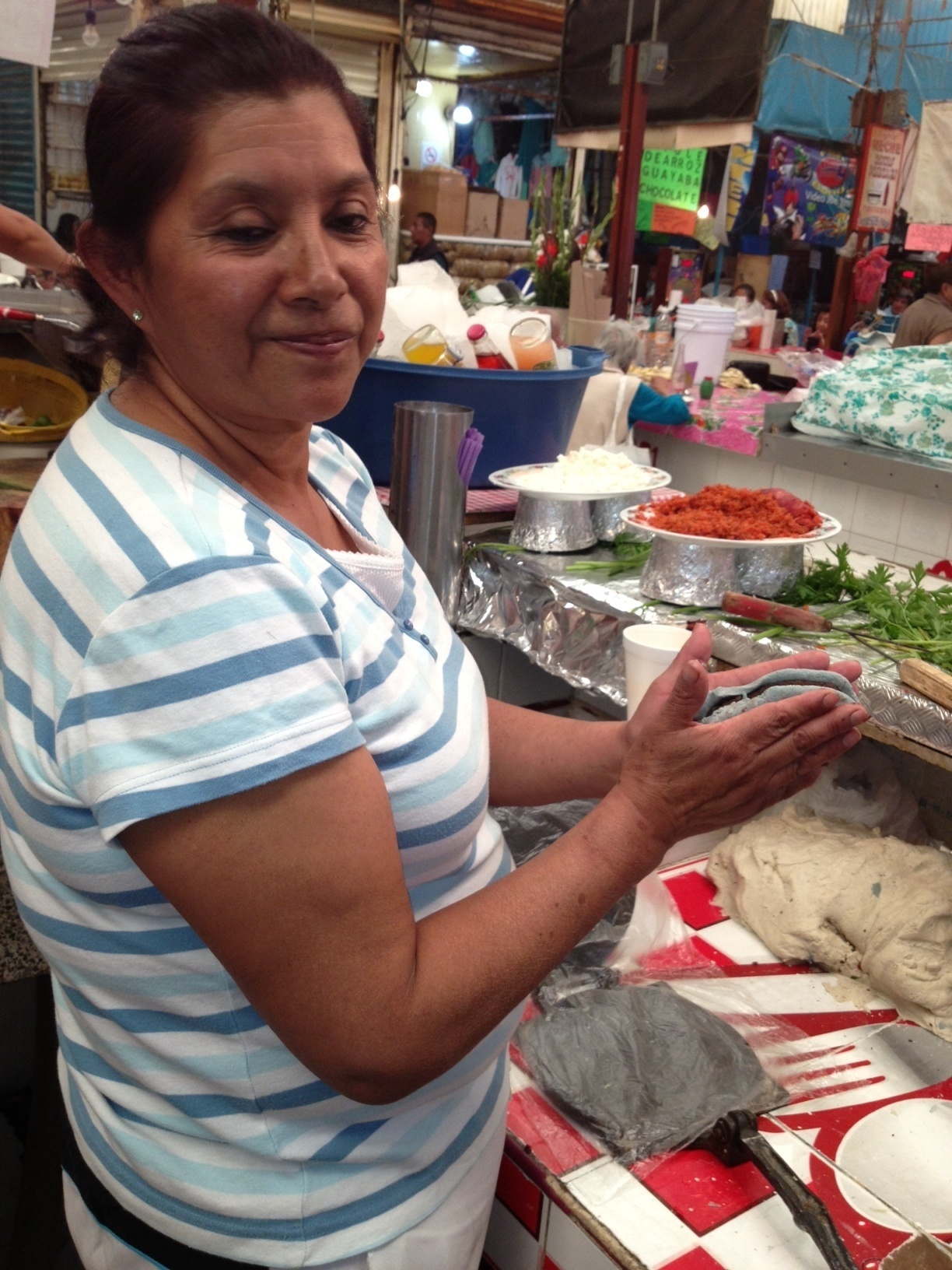 Isabel Salazar Cabrera says her tlacoyos are the best because of the way she cooks the bean filling. She says her mom was the first to ever sell tlacoyos in Xochimilo, a suburb in southern Mexico City.

She says tlacoyos have been the favorite food for generations. Her mom told her stories about making the tlacoyos for the farmers who worked the fields or Chinampas of Xochimilco, the floating gardens in the freshwater canals that made this southern stretch of the Mexico City valley so famous.

But Edmundo Escamilla Solis, a historian at the Culinary School of Mexico, says tlacoyos date back even further. He's seen the small corn masa treats mentioned in the writings of the conquistadors of Mexico in the 16th century.

He says Hernan Cortes and other Spanish chroniclers wrote about Mexico's indigenous outdoor markets and the stuffed corn masa breads sold in small food shacks. He says back in those days, tlacoyos were not only healthy — pre-Hispanic street vendors never used oil to grill them like now — they were also ideal to eat in a hurry or to take on long trips. He jokes that tlacoyos are the first fast food of the Americas.

While pre-conquest Mexicans may have eaten their tlacoyos in a hurry, chef Martha Ortiz prepares a more leisurely tlacoyo experience at her high-end restaurant in Mexico City's swanky Polanco district.

"We are going to make it beautiful with a small Mexican fish, sardina, and a beautiful Mexican salad," she says.

Topped with rich cheese and cilantro, Ortiz says she likes to dress up and surprise her clientele to the food of the streets.