Accessibility links
Now A Test Can Tell If Your Pricey Cup Of Cat Poop Coffee Is Fake : The Salt The world's most expensive coffee can cost $600 a pound, and it comes from — there's no delicate way to put it — civet poop. But how do you know if what you're shelling out for is the real deal? Chemists have come up with the world's first cat poop coffee test.

From gross to gourmet. That pretty much sums up civet poop coffee.

The beans are literally harvested from the feces of the tree-dwelling civet cat in Indonesia. The idea is that a trip through the animal's digestive tract partially ferments the beans and imparts a much-sought-after flavor to the coffee.

The exotic processing makes the coffee, called Kopi Luwak, exceptionally rare — and expensive: Think $600 per pound. And thus, experts suspect that much of what's sold as civet coffee on the market is actually either fake or made from low-grade beans.

Now biotechnologists in Japan have developed the first chemical test to differentiate predigested coffee plucked from civet poop from regular beans picked from trees. In the process, the team also uncovered some clues about why Kopi Luwak is one of the most prized coffees in the world.

There's been a big debate here in the U.S. about whether the strange brew is worth the hefty price tag, not to mention the cruel conditions in which civets are farmed to produce it.

Much ado about nothing? Left: civet poop coffee beans. Right: a cup of java brewed from the stuff. Claire O'Neill/NPR hide caption

Some professional coffee buyers call Kopi Luwak a gimmick and think its quality doesn't stand up to the hype. "One of the strongest arguments against this coffee — and one that seems to meet a general consensus within the industry — is that it just tastes bad," Lily Kubota of the Specialty Coffee Association of America wrote on the society's website.

But biotechnologist Sastia Prama Putri of Osaki University in Japan couldn't disagree more. "Kopi Luwak is exquisite," she tells The Salt. "I normally can't drink black coffee. I need milk and sugar. But I can drink Kopi Luwak black."

Putri argues that counterfeit coffees are giving the civet poop coffee a bad name. So she and her colleagues in the lab of Eiichiro Fukusaki went searching for a chemical fingerprint that could uniquely identify the gut-processed beans. "We want to be sure people around the world can try the real Kopi Luwak," she says.

The team ground up 21 different coffees from Indonesia, including seven Kopi Luwak varieties, and then measured the flavor compounds inside the beans.

Fans of civet coffee, like Putri, say it's smoother and less bitter than a regular cup of joe. But her team's testing found that predigestion of the beans in the civet's gut didn't significantly alter the compounds that contribute to coffee's bitterness, like quinic acid, caﬀeine and caﬀeic acid.

What the predigestion did change was the citric acid levels present in the ground-up beans. The gastric juices and enzymes in the civet's gut boosted citrus acid levels twofold, Putri says. 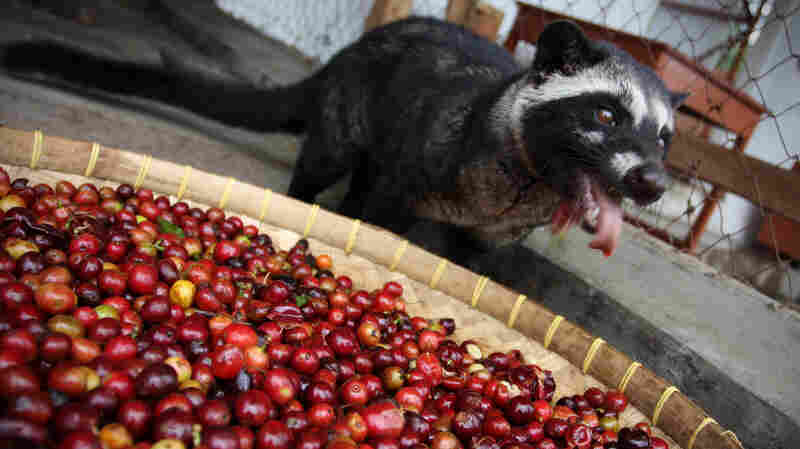 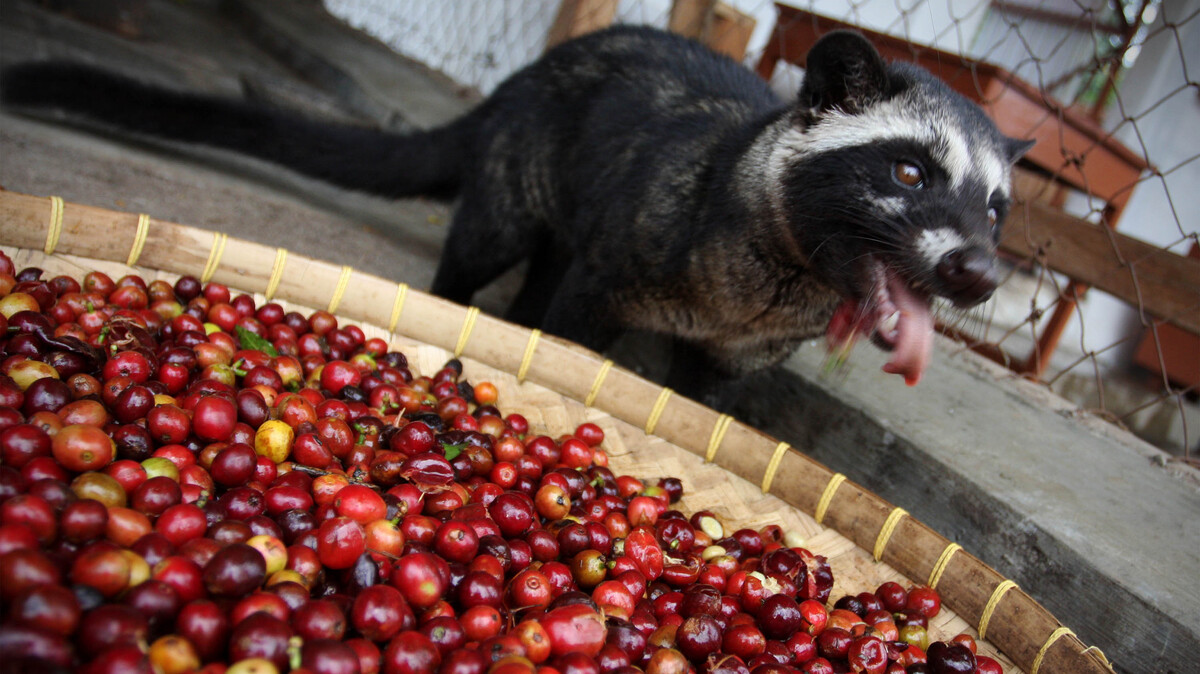 A civet cat eats red coffee cherries at a farm in Bondowoso, Indonesia. Civets are actually more closely related to meerkats and mongooses than to cats.

By measuring the citric acid concentration, together with that of malic acid and the ratio of two other compounds (pyroglutamic acid and inositol for all your flavor buffs), the team could successfully separate the real McCoy coffee from the fakes. It reported its findings in the Journal of Agricultural and Food Chemistry.

So could a boost in citrus acid be the secret behind Kopi Luwak's appeal? Perhaps, says coffee buyer Mark Overly, who runs Kaladi Coffee Roasters in Denver and blogs at The Coffee Heretic.

"Citric acid is highly prized in coffee," Overly says. "It has a nice lemony quality. It brightens a cup of coffee and makes it more lively — much like with a good glass of orange juice."

Ironically, he says, citric acid is an indicator that the beans are fresh and clean. "Having more of it in the civet coffee seems counter to what I thought sitting around in the cat's digestive tract would do," he says.

But still, the extra acid doesn't change Overly's mind about the civet poop coffee: He refuses to touch the stuff. "I won't taste it. I won't put it in my roaster," he says adamantly. "It goes against my philosophy about having clean coffee" — by which he means the unadulterated flavor of pure coffee beans.

Although he's never tried civet poop coffee, Overly says he was turned off by the thought of it — or really, the stench of it — 20 years ago. "Back in 1993, I helped an Indonesian farmer transport some of the civet coffee, and I remember the reek that came off the bags of beans," he says. "Even after the beans were cleaned, they had a wretched smell. I remember thinking, 'People drink this? Are you kidding me?' "