Accessibility links
Purple Sweet Potato A Contender To Replace Artificial Food Dyes : The Salt Consumers are demanding "natural" food dyes, and scientists say the purple sweet potato is the most promising source of pigments to make them. But it may be a while before your red Popsicle is made with this kind of vegetable-based dye. 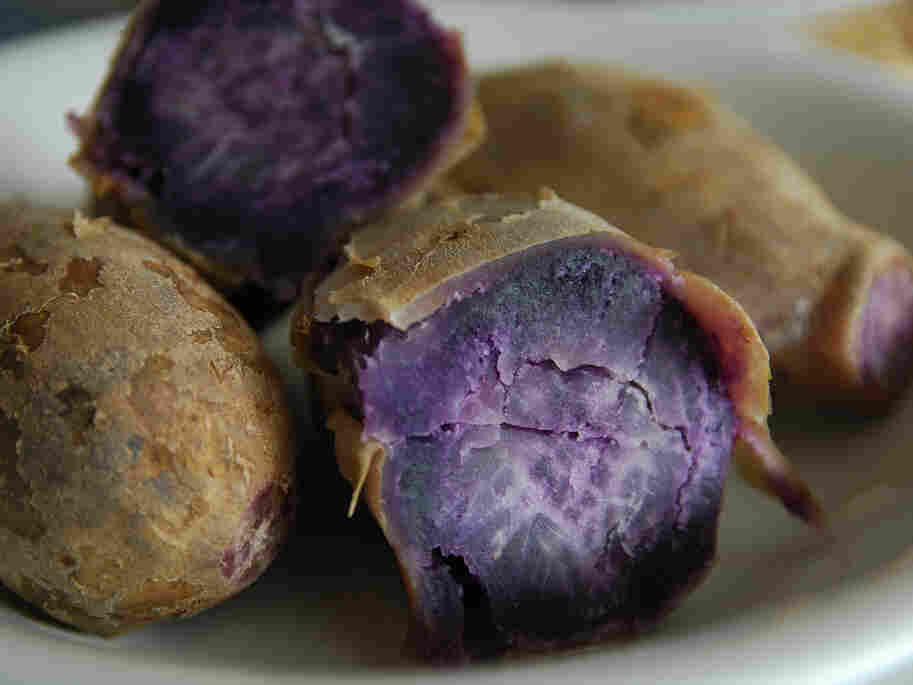 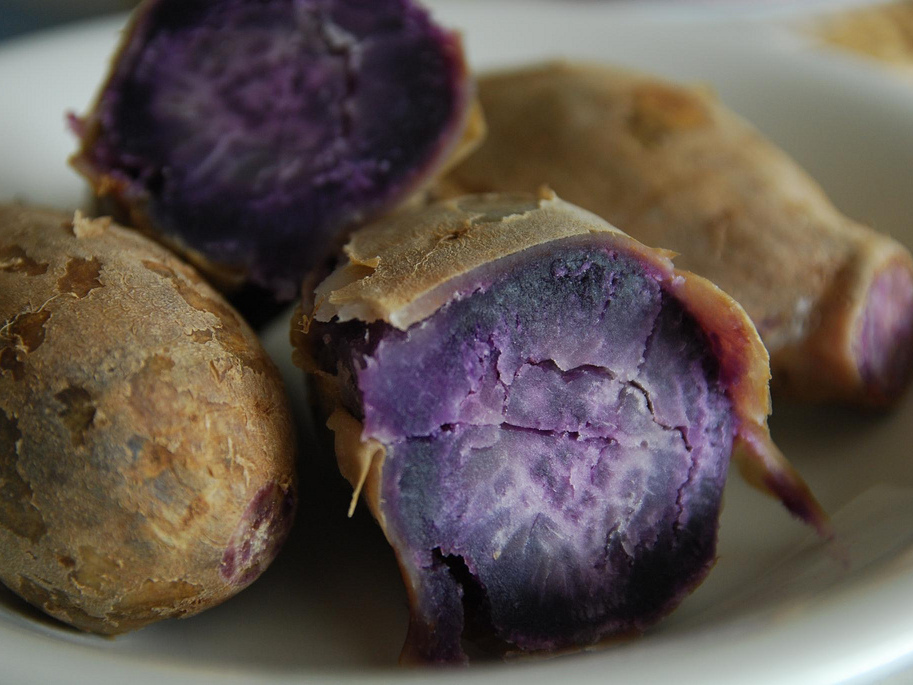 Food chemists say that pigments from the purple sweet potato are becoming a "natural" alternative to synthetic food dye.

We've grown accustomed to choosing our food from a spectacular rainbow — care for an impossibly pink cupcake, a cerulean blue sports drink or yogurt in preppy lavender?

But there's a growing backlash against the synthetic dyes that give us these eye-popping hues. And now scientists are turning to the little-known (and little-grown) purple sweet potato to develop plant-based dyes that can be labeled as nonthreatening vegetable juice.

Stephen Talcott, a food chemist at Texas A&M University, leads the research into extracting the pigments from purple sweet potatoes to dye foods.

"Our work with purple sweet potatoes has been going for a couple of years, partially in response to a trend within the food industry to move away from synthetic colors — primarily shades of red," Talcott said Sunday at a press conference at the American Chemical Society National Meeting & Exposition. "Purple sweet potatoes are a great alternative."

Talcott says purple sweet potato pigments are unique because they have "tremendous" color stability. In other words, they have more intense color and a wider color range — from raspberry red to grapelike purple — than other deeply hued fruits or vegetables. They're also well-suited for food products because they have a neutral flavor — unlike grapes, which have good color but bitter tannins. The sweet potato pigments even boast slight health benefits — they are mildly anti-inflammatory and anti-carcinogenic, Talcott notes.

But these pigments aren't exactly easy for scientists to extract, one reason there isn't more of this dye around. The hard texture of the potato makes the pigment hard to get to, which is what Talcott's lab has been trying to crack.

Another problem is the supply. Few farmers grow purple sweet potatoes, and the dye currently costs about $136 per pound.

But Talcott argues that as consumers learn to scrutinize their food labels more carefully, they'll push the food industry to grow the natural food coloring market.

Some parents are increasingly seeking out natural food coloring, out of fears about how the lab-made dyes affect children — though there's little scientific evidence to back such fears up. Back in 2011, a Food and Drug Administration advisory panel found that the current scientific data did not show that artificial food dyes cause hyperactivity in most children.

Still, food advocacy group Center for Science in the Public Interest asked the FDA to require that the label of a food containing color additives read "Artificially Colored" on the package next to the product name — something the agency already requires of many artificially colored products.

Even some "natural" dyes, like a red dye made from the cochineal bug, don't make the cut for some consumers. Back in 2012, we reported that Starbucks was ditching the dye — which is made from crushed bugs — after vegetarians and others protested that they had no idea their Strawberries & Creme Frappuccinos were tinted with bug extract.

Other companies continue to use cochineal, however, and CSPI is lobbying Groupe Danone, which makes Dannon yogurt, to replace the bug-based dye with more of the fruit advertised on the yogurt's label.