Accessibility links
Pets Or Livestock? A Moral Divide Over Horse Slaughter : The Salt Horse slaughter is banned in the U.S., but thousands of American horses are shipped to Canada and Mexico for slaughter every year. Investors argue restarting the practice in the U.S. would be better for business and offer a more humane end for horses that are neglected under the current model. 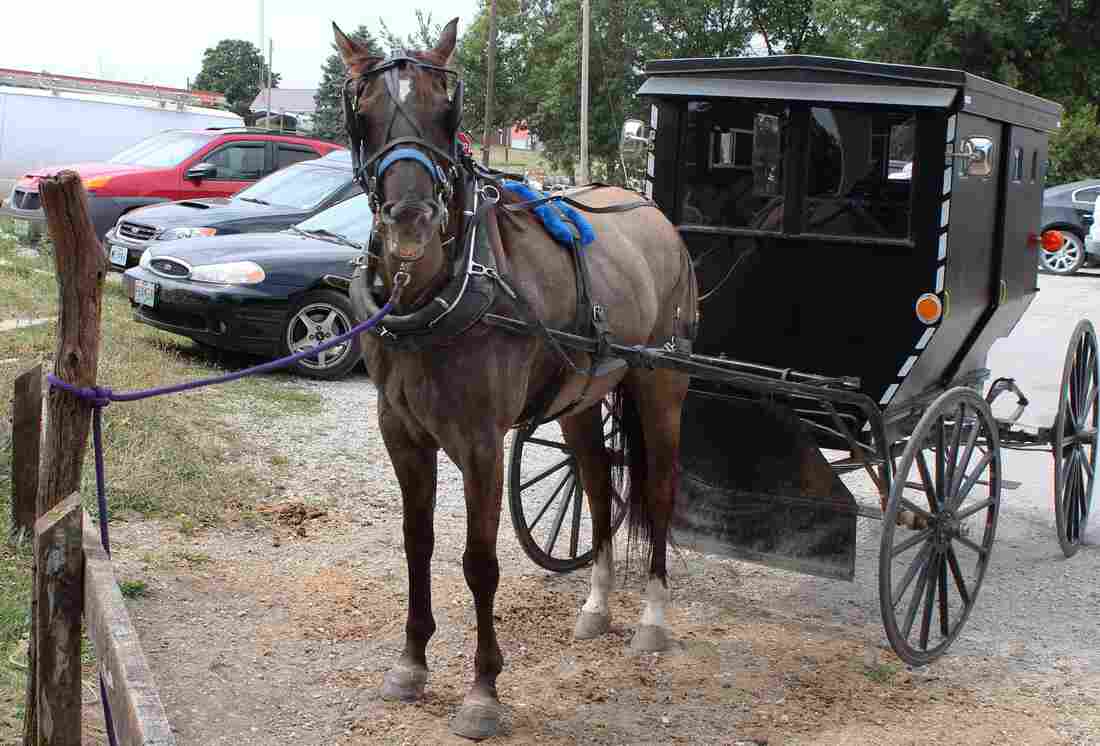 Jamesport has the largest Amish community in Missouri, and horse-pulled buggies are often parked alongside cars. Horse owners in the state are divided over whether to allow horses to be killed for meat in the U.S. Frank Morris for NPR hide caption 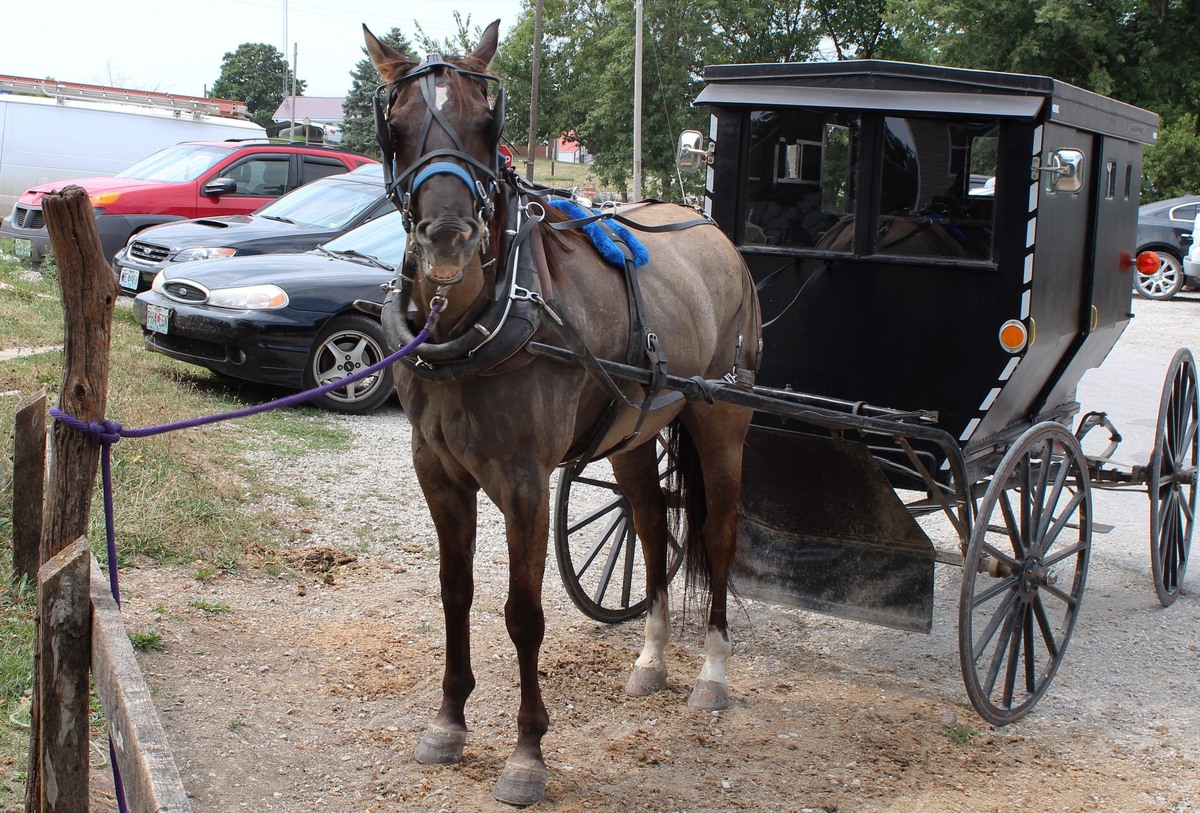 Jamesport has the largest Amish community in Missouri, and horse-pulled buggies are often parked alongside cars. Horse owners in the state are divided over whether to allow horses to be killed for meat in the U.S.

Few Americans eat horse meat, and many don't like the idea of slaughtering horses. But a handful of investors are struggling to restart the horse-slaughter industry in the U.S.

Thousands of American horses are already slaughtered in Mexico and Canada each year for their meat, which gets shipped to European and Asian markets.

Proponents of reviving U.S. slaughterhouses argue that the move would be good for the horse business, and more humane than the long, harsh trip across borders. The issue cleaves horse owners into two camps: those who view horses as pets, and those who see them as livestock.

Cynthia MacPherson, who led efforts to kill two proposed horse slaughterhouses in southern Missouri, says it would be like killing pets.

"If you said, 'I'm going to open a puppy mill to breed dogs because people in China and people in France want to eat dog meat,' I think there'd be a big public outcry. And that's what we have here," she says.

Public opposition has hounded the horse industry since Congress funded inspections for slaughterhouses in 2011. U.S. Humane Society President Wayne Pacelle argues that horses suffer more than other animals at slaughter. He also contends that the meat is dangerous, since horses can be treated with drugs not allowed in animals raised specifically for food.

"We have standards. We have values in society. You don't just opportunistically harvest whatever animal is around," Pacelle says.

Sue Wallis, a Wyoming lawmaker with a dozen horses, says there are two "very different styles" of meat production going on. She says fattening animals fast — and slaughtering them young — is the modern way to produce meat. Horse slaughter, she says, follows an older model.

China's Horses May End Up In Russia's Kabobs

"Chickens for eggs, lambs for wool, cows for milk, horses for work, and when their useful, productive life has passed, then you turn them into meat," she says.

For Wallis, horses are livestock first and companions second — more assets than pets. And that's common in rural areas.

In Jamesport, Mo., horse-drawn buggies park next to cars. Elmer Beechy, a wiry man sporting a faded black hat and a beard, runs a shop that sells horse equipment.

"I really love horses. But when they're no good to me, what are you going to do with them? We don't want to take 'em out back and shoot 'em," he says. "They may just as well be slaughtered, and get some use out of them."

Until they were shut down, domestic slaughterhouses provided a ready market for old, hobbled or unruly steeds. It made horses more valuable. Beechy says shutting them down has caused a glut of unwanted and neglected animals.

"There's a lot of horses out there in the pasture, hurting. Some of them linger three or four years, suffer every day. And the slaughter's the best place for them," he says.

Domestic slaughter, he means. The long hauls to slaughter plants in Canada and Mexico can brutalize the animals, and burn up the sellers' profits. So thousands of horses have been abandoned on Indian reservations, cow pastures and public lands.

"People will just stop and open the trailer and turn 'em out and drive off," says Jim Smith, who maintains a wild horse refuge in the Missouri Ozarks. As far as he's concerned, the solution lies in opening what he calls "killer plants."

Farmer and businessman Dave Rains shows off his homemade "knock box," a lightly padded steel cage built to confine a horse that's about to be shot in the head. Necessary business, he says, but not work he's looking forward to.

"It's hard, but it's a better end than a slow, painful death, and that's what a lot of these horses are going through right now," he says. 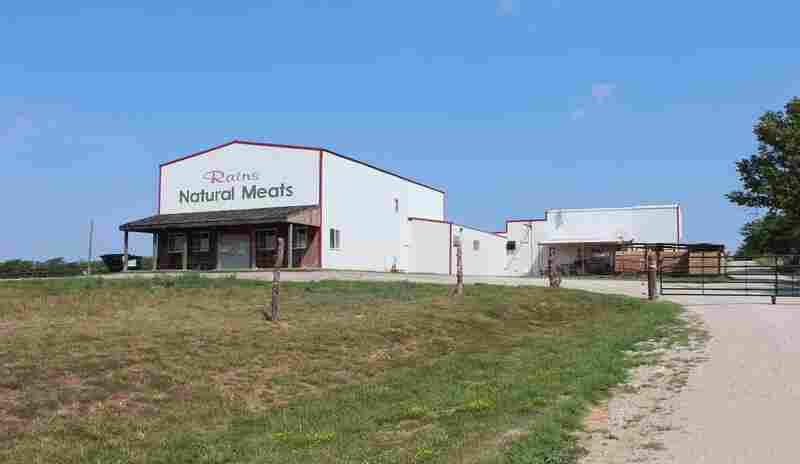 Dave Rains owns a would-be horse processing plant near Jamesport, Mo., but a lawsuit has prevented him from getting his business running. Frank Morris for NPR hide caption

Rain's finances are suffering, too. He built a processing plant on the corner of his farm near Jamesport for naturally raised beef and pork. When big companies saturated that marketplace, he put in for a permit to butcher horses. He expected to be in business this time last year.

"I knew there'd be some opposition, but I never dreamed it would be at the level that it has been," Rain says.

A lawsuit, backed by the Humane Society, now stands between Rains and a state permit. A plant in New Mexico is also embroiled in litigation.

Rains has picked up work driving a school bus to help make ends meet and keep his own saddle horses fed, while he waits to find out whether horses will once again be slaughtered in the U.S.