Accessibility links
The Secret To Making It Through A Yom Kippur Fast? Kreplach : The Salt Jews across the world are sitting down to a big meal before Friday's Yom Kippur fast. And many of them are eating kreplach. Some say these strange-sounding-yet-good-tasting dumplings are a holiday meditation on our inner and outer selves. Or maybe they're just a delicious example of the peasant cooking of Eastern Europeans. 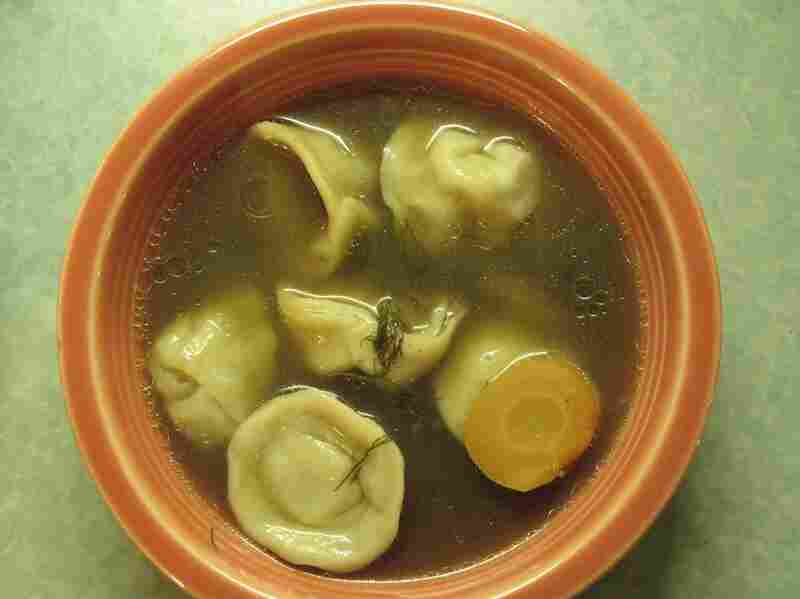 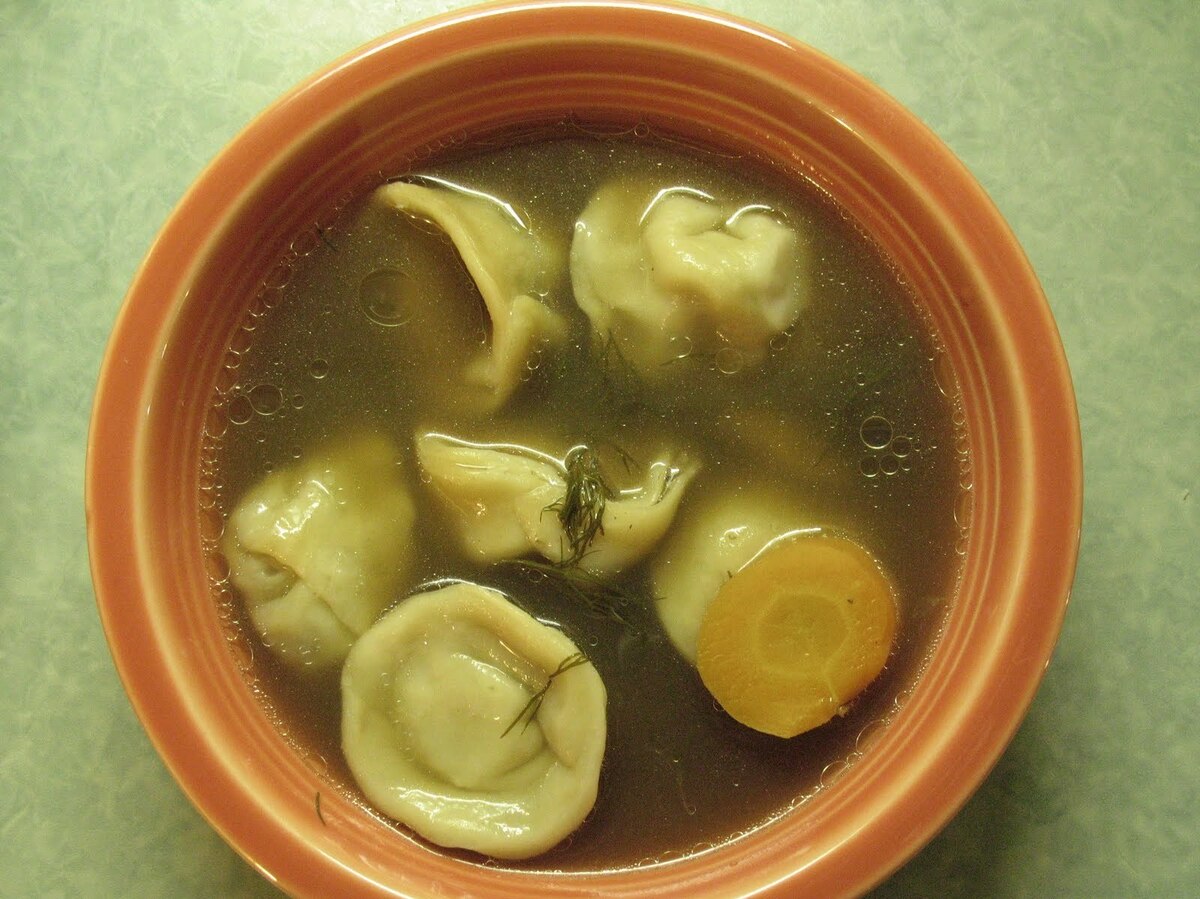 To mark the Jewish holiday of Yom Kippur, the day of atonement, Jews fast from sundown to sundown. But before the sun sets, friends and family gather to enjoy one final meal. And for the Jews of Eastern Europe, that meal traditionally includes kreplach.

Kreplach — krepel is the singular — are little dumplings, sometimes known as "Jewish wontons." Like the Chinese dumpling, they're filled with meat, wrapped in dough and added to soup. (For more on dumplings, check out NPR's Dumpling Week.)

There are cheese-filled variations and pan-fried preparations (good for leftovers the next evening). Some Jewish scholars say the dumplings have special meaning for Yom Kippur: The filling and its wrapper together serve as a sort of meditation on our inner and outer selves as we approach a sacred holiday. More simply, it's tradition.

Many Jewish grandparents today grew up eating kreplach prepared by their own mothers and grandmothers. But few make them anymore, and for good reason — kreplach are a lot of work. "My mother worked forever — hard labor!" says Muriel Silverstein, a resident of the Rose Schnitzer Manor retirement community in Portland, Ore. "She would grind the chicken or the meat herself, and stuff the little pieces of dough, and then she cooked them and put them into the soup."

According to deli owner and cookbook author Nick Zukin, that effort embodies some of the hallmarks of peasant cooking — finding flavor where you can. For his latest book, The Artisan Jewish Deli at Home, Zukin pulled together recipes from around the country — from cooks who sneak Sririacha into the Russian dressing on that Reuben, to those who still make the classics the way their grandmothers taught them. 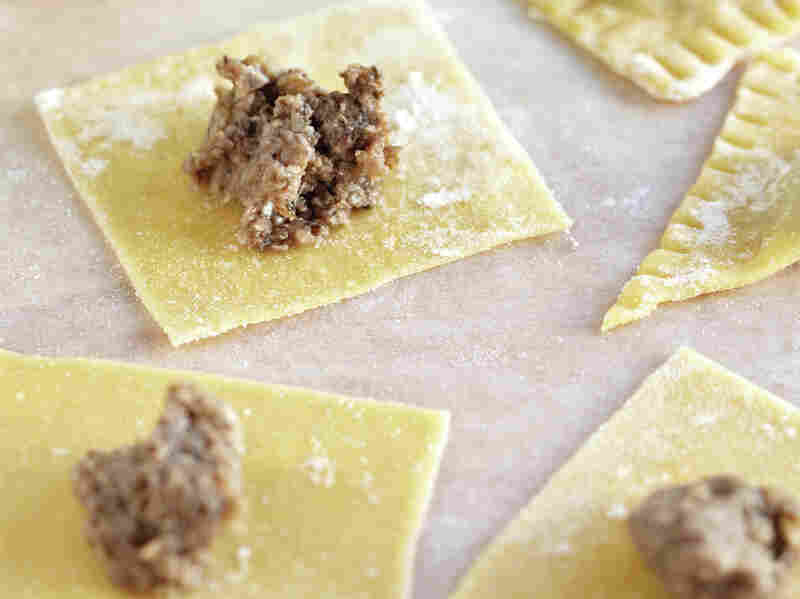 Kreplach, a special Jewish holiday dish that can be made essentially out of leftovers. Courtesy of Caren Alpert hide caption 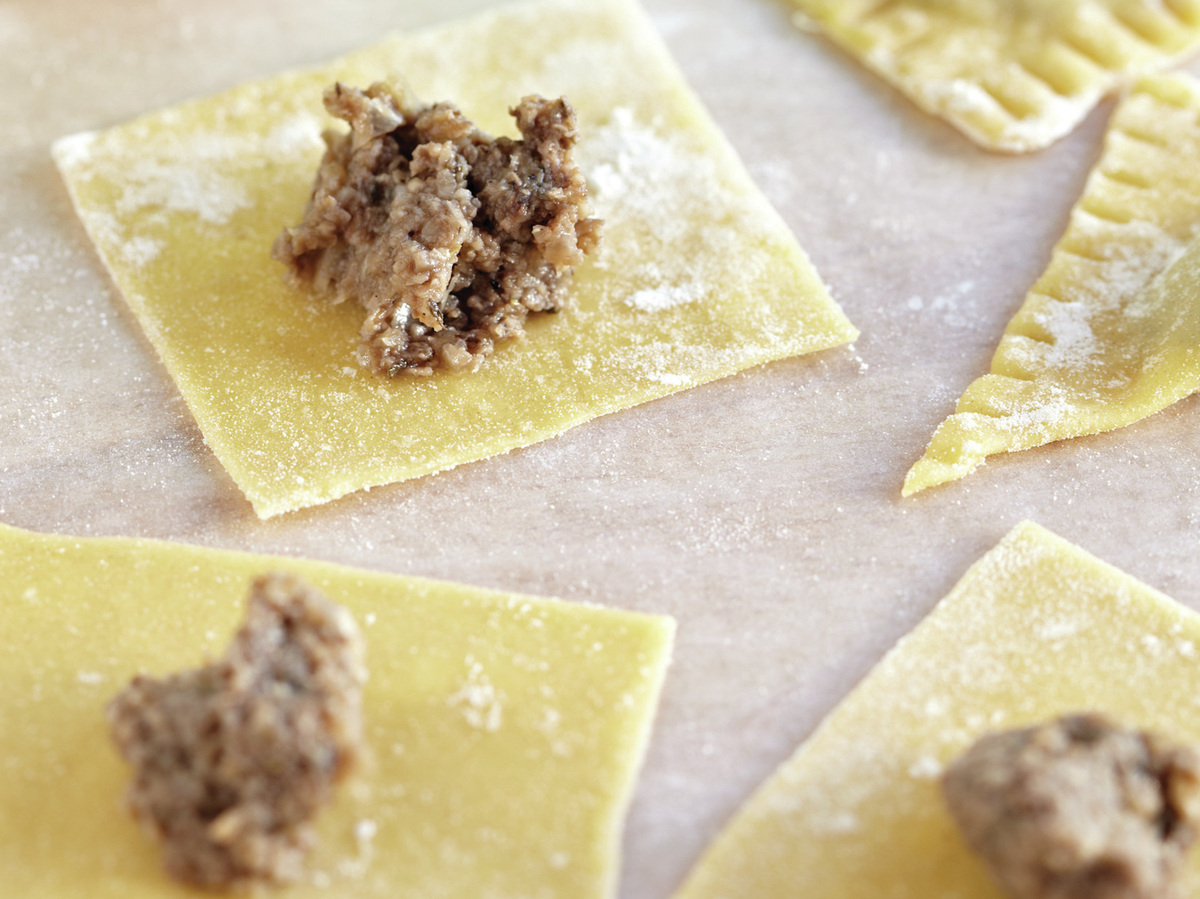 Kreplach, a special Jewish holiday dish that can be made essentially out of leftovers.

To make kreplach, Zukin fries onions in chicken fat — schmaltz — until they're just at the edge of burnt, to get that really deep flavor, which he calls "sweet dirt." Zukin says you can use leftover brisket, or the tough chicken at the bottom of the soup pot. The meat is ground up (traditionally with an old-school meat grinder, or by hand with a hackmesser), along with some cooked vegetables, maybe a bit of chicken liver.

These additions help stretch the meat, letting you get a few more servings from the valuable protein, and they also add back in a bit of moisture and flavor. It's how you make a special holiday dish out of what is, essentially, leftovers.

The end result is a thrifty little package with a surprisingly complex flavor. "The chicken schmaltz is the high note, or the treble, the liver is the bass, and the beef is the tenor," says Zukin. "Yes, Kreplach Symphony No. 1."

But, of course, the theory of kreplach harmony only goes so far. So we brought Zukin's kreplach back to the experts at Rose Schnitzer Manor for the real test. For the most part, they passed with flying colors, although there were differing opinions on the levels of salt, and whether a food processor had rendered the filling too smooth.

Ultimately, kreplach isn't just about how finely you've chopped the filling, or how thin you've rolled the dough. It's about a special occasion, and, as resident Shelly Petcher explains, knowing someone special made them for you. "That was a way a lot of grandmothers showed their love for the family." And that love — and those kreplach — can sustain you, until the sun sets and the Yom Kippur fast comes to an end.

This recipe comes from Nick Zukin, a riff on the one he adapted for The Artisan Jewish Deli at Home. Zukin stresses this is just a template and can easily be tweaked to accommodate any leftovers you may have. It makes about 150, but they freeze beautifully.

½ pound chicken livers, trimmed of any membrane and dried with paper towel (optional)

salt and pepper to taste

In a large skillet, heat the fat over a medium-high flame. Add the onions, along with a sprinkling of salt, and cook, stirring occasionally to break them up, until the onions soften and become translucent. Turn the heat down to low, and continue to cook until the onions get an even, deep brown color, ~40 minutes. Stir only as needed. Set aside to cool slightly.

While the onions are cooking, heat a skillet to a high heat, and add a splash of fat. Add the livers (beware of spitting oil), and cook until they brown, then turn and brown on the other side. You want to get some color, but don't overcook — you want to just feel the beginnings of firmness. Set aside to cool slightly.

In a food processor, pulse the leftover brisket until it's in small shreds but still has some texture. Remove and set aside. Add the carrots and parsnips, onions, and liver, and pulse until somewhat smooth, with a bit of texture (you can also chop everything in a grinder, if you have one). Remove the mixture, and combine with the brisket. Season to taste with salt and black pepper, adding additional schmaltz or broth to moisten the mixture if needed.

Combine the flour and salt in the work bowl of a food processor. Pulse to distribute the salt. Add the eggs and 1 tablespoon water and process until a ball forms, 15 to 30 seconds. If after 15 seconds the dough doesn't begin to form a ball (it will probably appear sandy or pebbly), add a little more water (just a teaspoon at a time) without stopping the machine until a ball forms. Turn the dough out onto a lightly floured work surface and knead until the dough is smooth and supple, about 2 minutes. Form the dough into a ball, and then use a knife to divide it into 4 equal pieces. Shape each piece into a fat disk. Wrap each disk in plastic wrap and set aside at room temperature to rest for at least 20 minutes, and up to 3 hours, before using.

To shape the kreplach: Roll out the first ball of dough, either by hand or using a pasta machine. Roll until you can almost read through it (usually the next-smallest setting on a pasta machine, or until your arm nearly falls off by hand), using additional flour for dusting as needed. If the dough resists, let it relax for a minute, then come back to it.

When the dough is thin enough, use a sharp knife to cut it into 2-inch squares. Place a small amount of filling in the center of each square (~2 teaspoons), and fold the dough over it. Moisten the edges of the dough with water or beaten egg, and fold over, crimping around the filling to squeeze out the air. Press the edges to seal (with either your fingers or a fork). You can bring the two small angles together, for a tortellini shape, or leave as a triangle. Place the shaped kreplach on a flour-dusted tray, and repeat with a remaining dough and filling.

To cook the kreplach: bring a large bowl of salted water to a boil. Gently plop in the kreplach, and adjust the heat so that it is simmering but not violently boiling. Cook the kreplach until the pasta dough is tender, a few minutes after they've risen to the top. Remove with a spider or slotted spoon, toss with a bit of oil or schmaltz, and spread out on a sheet pan so that they don't stick. Serve in hot soup, or freeze for future meals.