Accessibility links
Atkins Hopes To Ride Paleo, Low-Carb Craze To A Comeback : The Salt Atkins Nutritionals says a renewed faith in the low-carb approach to dieting is helping the company grow again. It has launched a low-carb frozen food line and is plowing millions into advertising to win back dieters. 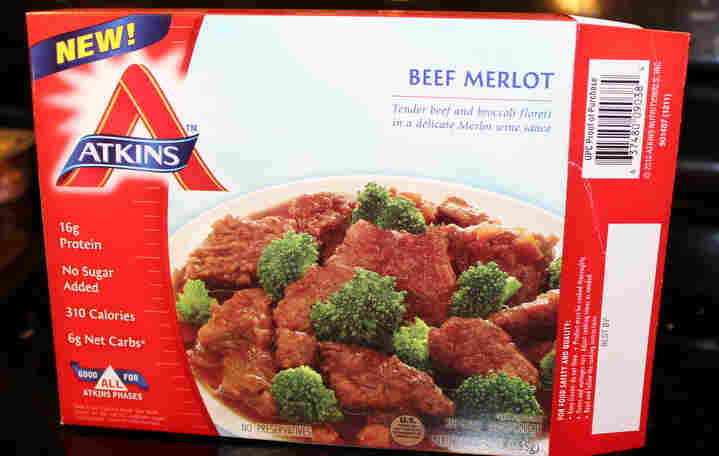 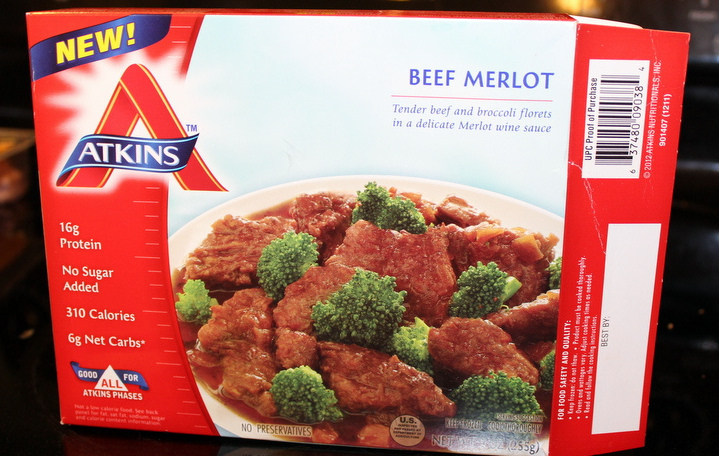 A Beef Merlot dinner from the Atkins frozen food line, launched in January.

A decade ago, Atkins was undeniably the fad diet of the moment: Back then, nearly 10 percent of Americans said they were either on the low-carb weight-loss plan or had tried it.

But after Dr. Robert Atkins, its namesake and mastermind, died of a head injury in 2003, the brand went downhill fast. Nutritionists berated the plan for promoting saturated fats and cholesterol-rich foods. Sales of Atkins books and food products dropped precipitously. And Atkins Nutritionals filed for bankruptcy in 2005.

The brand changed hands a few times and was eventually bought by private-equity firm Roark Capital Group. In the meantime, the low-carb vs. low-fat diet debate continued to simmer. And then, in June 2012, the scales of science began to tip in Atkins' favor. A study published in the Journal of the American Medical Association found that patients on a low-carb diet kept weight off longer than those on a low-fat diet. (This still doesn't mean you should load up on bacon, which is what many misguided Atkins followers did in the past.)

Now Atkins Nutritionals says this renewed faith in the low-carb approach is helping the company grow again. Sales of Atkins' branded products have grown by nearly 44 percent since 2011, according to the market research firm IRI. And the folks at Aktins are also hoping that the popularity of the paleo diet, which overlaps with Atkins in a few ways, can give the brand a boost.

"The resurgence of low-carb and paleo ways of eating definitely enhances our presence even more," Jennifer Livingston, spokeswoman for Atkins Nutritionals, tells The Salt.

Part of the Atkins strategy to win back dieters is through a frozen food line launched in January, which the company says is the first low-carb frozen food line on the market. Atkins Nutritionals has also hired a new ad agency and is plowing tens of millions of dollars into advertising, according to Advertising Age.

Livingston notes that the Atkins diet and the paleo diet are not identical: A huge part of the Atkins diet is its line of processed food, like the Chocolate Caramel Crunch bar, which paleo devotees would disdain. But Livingston says the diets share an affinity for protein as a nutrient-dense food that promotes satiety. "Like paleo, we are also rooted in eating whole foods, lean protein, vegetables and fruits," Livingston tells The Salt.

But how realistic is a true Atkins comeback? While scientists may be less skeptical about the benefits of a low-carb diet, for consumers, it's still just as tough to kick bread, cake and pasta as it was in 2003. And as we've reported, there's a growing body of scientific evidence suggesting that carbs may be addictive.