Accessibility links
Move Over Vodka; Korean Soju's Taking A Shot At America : The Salt It's the top-selling spirit in the world, but you've probably never heard of it. That's because Jinro soju does less than 5 percent of its sales in the U.S. Now, they're looking to expand that presence — by a lot. "We want to be in every store," says one marketing manager. "That's our main goal." 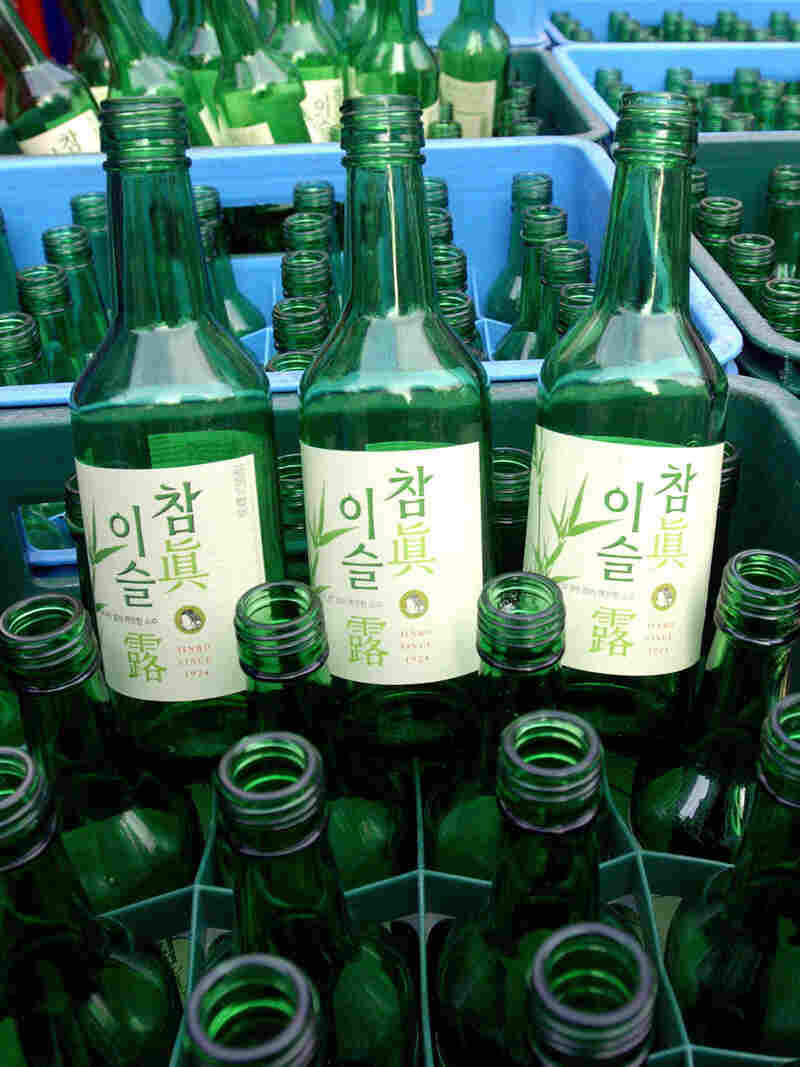 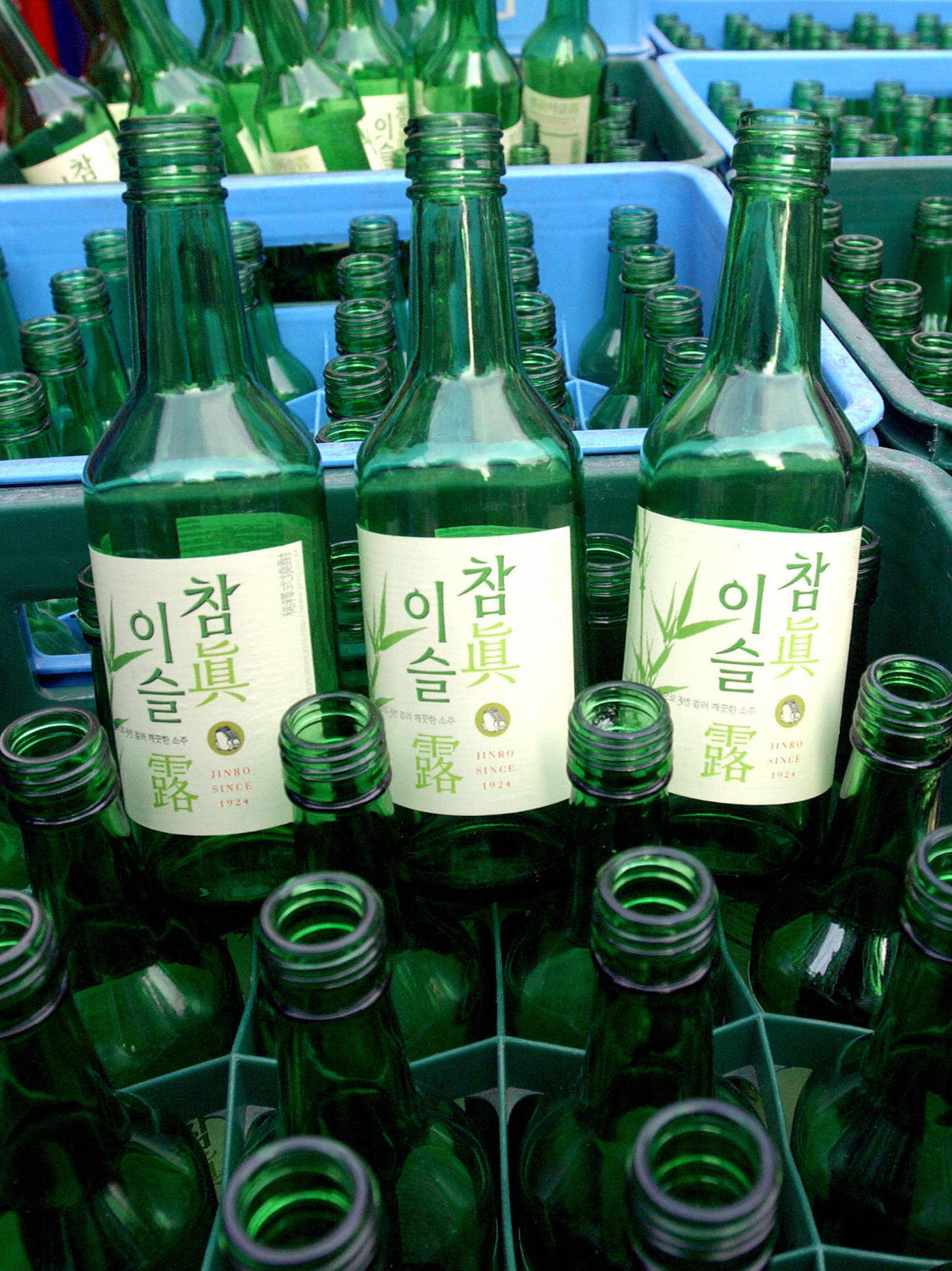 Every year, the trade magazine Drinks International puts out a list of the top-selling alcohols in the world, and in the category of spirits, there is one brand that more than doubles the sales of its closest competitor every year. Smirnoff, Jack Daniel's and Bacardi don't even come close.

That top-seller is South Korea's Jinro soju, a clear spirit traditionally made of rice. It's about 20-percent alcohol and has a light, slightly sweet taste. The reason you've probably never heard of it is because Jinro does less than 5 percent of its sales in the U.S. It makes up for that by dominating the market in South Korea, and doing brisk business in Japan and China.

Now, Jinro's American operation wants to expand, and it's getting some help from a major spokesperson — Korean pop star PSY, whose "Gangnam Style" music video is now closing in on 2 billion views.

"The Korean culture is now becoming the hip culture," says Patty Kang, who runs advertising strategy for Jinro America. Kang, who is herself Korean-American, she says she recently saw this play out at a K-Pop concert in L.A.

And, of course, Kang says, Korean-Americans are already sold on Soju.

"I mean, we're not alcoholics, so we don't have it at every single meal, but if it's any type of gathering — friends, family, whatnot — Soju is always there," she says. "It just goes with the food."

In an effort to reach people who have no connection to Korean culture, Jinro has partnered with the Los Angeles Dodgers and started selling soju at games. They've also got PSY up on billboards around L.A.

"We want to be at every store. Like everybody could just go into a store and see soju there," says Tae Kim, sales and marketing manager for Jinro America. "That's our main goal."

But Hamish Smith — deputy editor of Drinks International and the author of this year's report — calls that goal unrealistic. He says there is a precedent for a new spirit entering the American market: In the 1950s, vodka was a foreign alcohol trying to make it big in the U.S. and now it's the top-selling spirit here.

"You might argue that if vodka could do it — a Russian-Polish spirit, white spirit — then why not?" Smith says. "But I kind of feel like that place has been filled."

Soju has one key advantage over vodka, though, and that's alcohol content. Because it's around 20 percent, restaurants in some places don't need a full liquor license to sell soju, just a beer and wine license, which is easier and cheaper to get.

Bank of Venice, a bar in California's Venice Beach, sells soju versions of mojitos, margaritas and other cocktails. Bartender Megan Cross explains, "if you take vodka, its characteristics are colorless, flavorless, odorless. That's premium. So soju, in some respects, is the same, but just lower proof. So it lends itself to be manipulated."

And even though soju has less alcohol content, the bartender can always just double the volume. But it isn't always an easy sell on tourist-heavy Venice Beach.

"It's hit and miss," Cross says. "Because of our location, you are getting the people that just want to get wasted, that just want a shot of Jameson. And it's hard to say, 'I'm not full liquor [licensed], but I have soju.' And it's like, 'What language are you speaking?'"

Still, they must be doing something right. Thomas Elliott, who owns Bank of Venice as well as another bar that mixes soju cocktails, says the decision to serve soju has nothing to do with Korean culture and everything to do with his bottom line.

"It's absolutely a business decision," he says. "It's either have an alternative for your customers who want a different kind of a beverage, or not be able to serve them."

Despite lingering skepticism, there's every indication that Jinro will outsell all its competitors again next year, with or without the U.S.