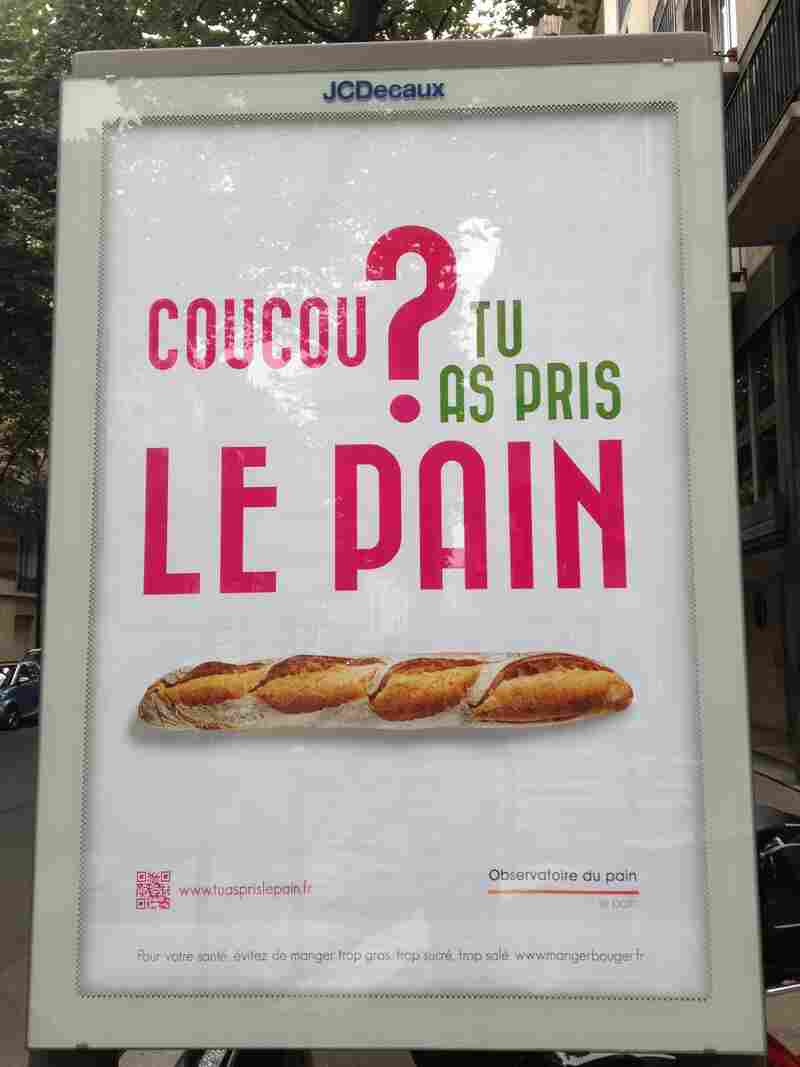 The campaign slogan is plastered on billboards and inscribed on bread bags in 130 cities around France. Eleanor Beardsley/NPR hide caption 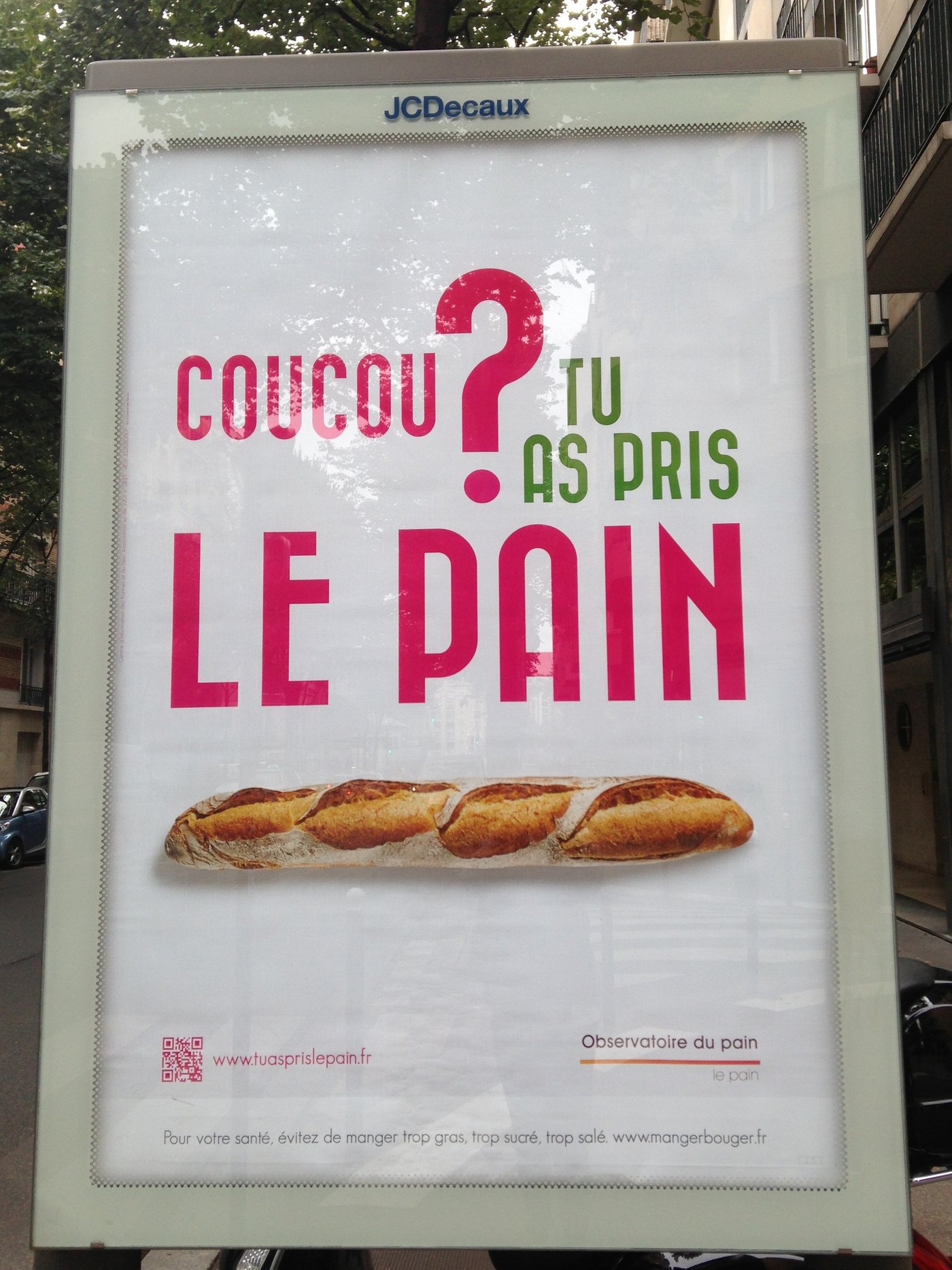 The campaign slogan is plastered on billboards and inscribed on bread bags in 130 cities around France.

The French, it seems, aren't eating bread the way they used to. The average French person consumes just half a baguette a day, down from a full baguette 40 years ago.

Bernard Vallius, who heads the group, says it used to be that people ate a sit-down lunch and dinner with family or friends every day. Now people — especially the young and those who live in cities — eat sandwiches or skip lunch altogether and snack, he says.

He calls bread the silent pivot of every French meal. And the bread lobby has launched a campaign to make it speak up. Inspired by the California Milk Board's campaign, "Got Milk?" the Observatoire du Pain came up with the slogan, "Cou cou, tu as pris le pain?" which translates roughly as, "Hi there, did you pick up the bread?"

The slogan is plastered on billboards and inscribed on bread bags in 130 cities around the country. "What we want to do is just to make sure that people have the reflex, going home at night, to buy the bread. That's all," says Vallius. 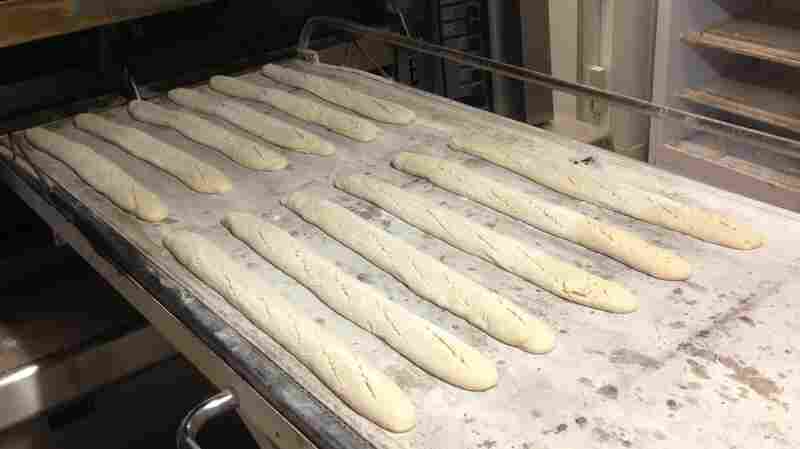 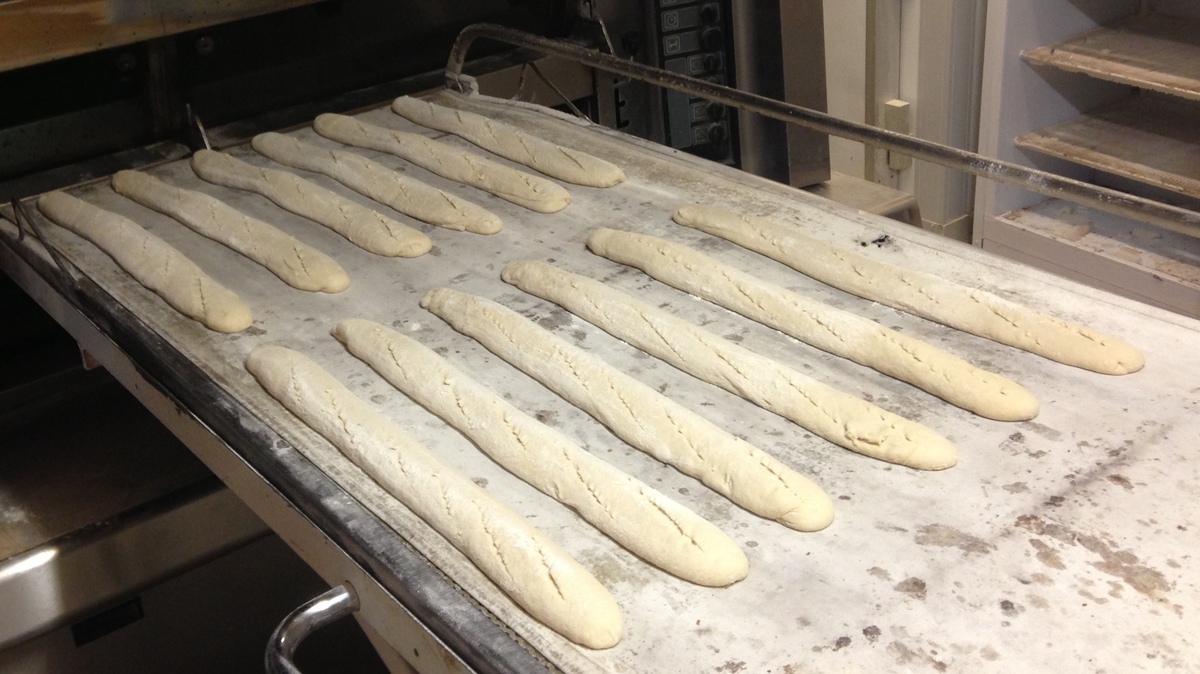 Baguettes head into a giant oven at Le Grenier a Pain Bakery.

Sisters Elsa and Emmanuelle Condet own the most popular bakery, or boulangerie, in my 15th arrondissement. They haven't even heard of the campaign, but they hardly need it. Most days the line to buy their bread stretches out the door and down the street.

The bakery's front room is filled with toasted baguettes in baskets and shelves of round and other style breads. One side of the shop displays an array of gorgeous cakes and pastries. All the classics are there — chocolate éclairs, Paris-Brest, choux a la crème.

The women don't come from a family of bakers, but their mother made fresh bread every day. "We were woken up every morning by the smell of fresh baked bread," says 36-year-old Elsa Condet. She says they employ several bread and pastry makers and have a real savoir-faire in the bakery.

She says the secret is that everything is made from scratch, with no preservatives, on the premises. "It takes five hours to make a baguette, from the moment you weigh the ingredients to when you take it out of the oven. And that's the key: time. The longer you let the dough rest and ferment, the better the bread will be."

While all French bakers used to do it that way, mechanization took over in the 1960s and '70s, and many boulangeries even bring in frozen dough to bake what are known as industrial baguettes. They're white, contain additives and are often pretty tasteless.

But a decline in quality has also led to the emergence of a new breed of artisanal bakers devoted to doing it the traditional way.

The sisters do take advantage of modern baking machinery, which they say saves a lot of effort and time. For example massive wads of dough are no longer kneaded by hand — or foot — Emmanuel says jokingly. There is a machine to do that now. Another one cuts the dough in equal parts, and another shapes the long baguettes.

But even with machines, you still need an experienced baker, say the sisters. To keep the bread size and consistency standard, the water temperature must remain the same. But it's not the same temperature outside, says Emmanuelle. "So the baker has to feel the weather, and depending on whether it's hot, rainy or cold, you have to adjust the water."

Aside from industrial bread, there's another trend that sends shivers up any traditional baker's spine. More and more people like their baguettes softer and undercooked. The Condets say this is a result of inroads made by artificial supermarket loaves. And they say they're trying to educate their customers about good taste. "They see that in a little better cooked bread, flavors come out. Don't eat it burned out white, but caramel," says Emmanuelle.

The vast majority of French people, especially Parisians, still pick up their bread at the neighborhood bakery. France enjoys the highest density of independent bakeries in the world — 32,000 — and the French consume around 10 billion baguettes a year.

The Bread Observatory's campaign website says bread is part of French civilization and a staple of health and conviviality. And it's especially important if you're watching your weight. That's right. There's no Atkins diet philosophy here. Every French person knows you should never cut bread if you're on a diet.

Sprightly looking octogenarian Christiane Serpagli has come in to buy her daily demi-baguette. She is 89 years old but looks more like 79. She says she's been coming here for 17 years. "Bread is vital for me. In the morning I always eat half a baguette with lots and lots of butter," she says with a laugh. "I've never worried about gaining weight."