Accessibility links
Raising Tastier Sea Urchins For Foodies And The Environment : The Salt A scientist in Birmingham, Ala., is trying to help overharvested sea urchins, considered a delicacy in many parts of the world, find their way back to a restaurant near you. He's developed an urchin farm to help grow them more sustainably and a special feed that gives them a sweet umami taste. 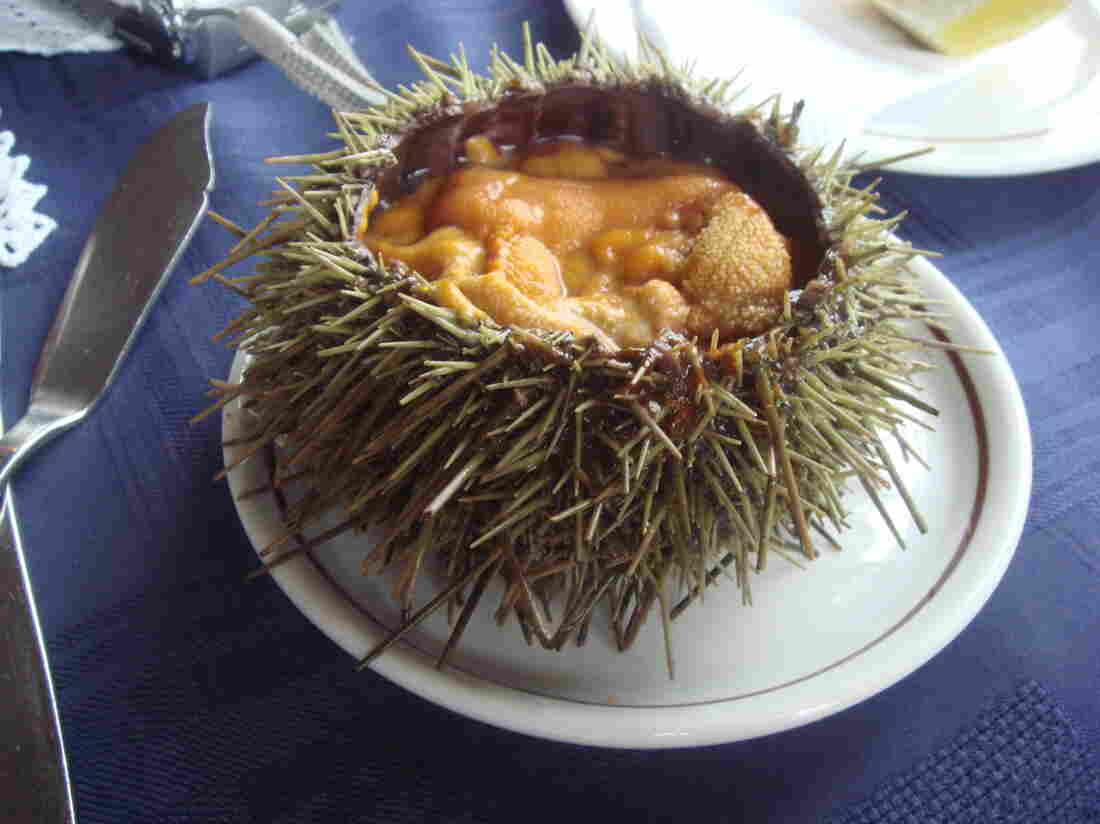 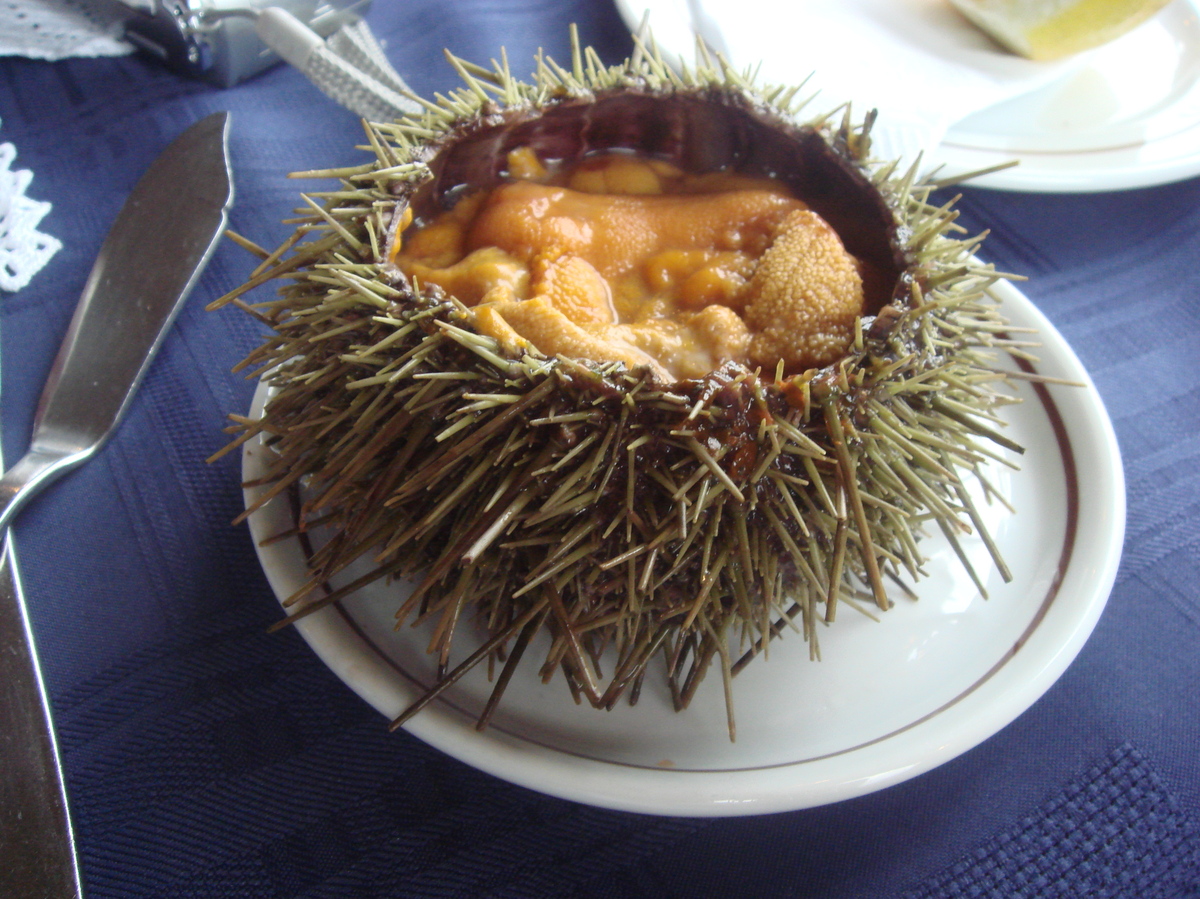 Sea urchins are considered a culinary delicacy, but supply can't keep up with demand.

Sea urchins are considered a culinary delicacy in many parts of the world, including Japan and the United States. The market for this "foie gras of the sea" is growing rapidly — so fast that supply can't keep up with demand.

But a scientist in Birmingham, Ala., says he's found a solution: He's built a sea urchin farm in his lab and has even developed a food for them to make them taste better. Now, he wants to take his tasty urchins out of his farm and into restaurants across the country.

Deep in a basement at the University of Alabama at Birmingham, biology professor Stephen Watts opens a door into a large, wet room that smells — well, fishy. Inside, hundreds of spiny sea urchins sit in large blue tanks. Each urchin lives in a small cage that's about 3 inches high with different colored tags attached. The tags detail the different diets that Watts and his team feed these sea creatures. As I look into one of the cages, I see an urchin using its feet, which look like tiny tubes, to eat something that resembles spaghetti.

"They're slow eaters," Watts says. "And they'll start at one end and eat it much like a rabbit might eat a carrot, from one end all the way to the other."

Watts started his sea urchin farm nearly two decades ago as a sustainable solution to a big problem: Sea urchins have been so overharvested that, in some areas, their numbers will never recover. For instance, during the heyday, in the mid-1990s, Maine fishermen harvested about 50 million tons of sea urchins each year. These days, 90 percent of the original urchin population off the coast of Maine has permanently disappeared, Watts says. 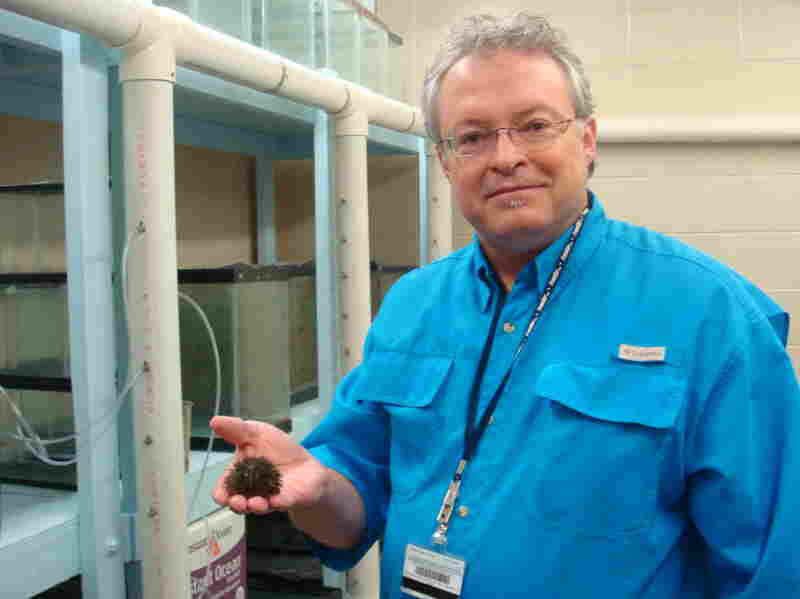 Stephen Watts, a biology professor at the University of Alabama at Birmingham, has been growing sea urchins in a lab for nearly two decades as a way to address overharvesting. Maggie Martin hide caption 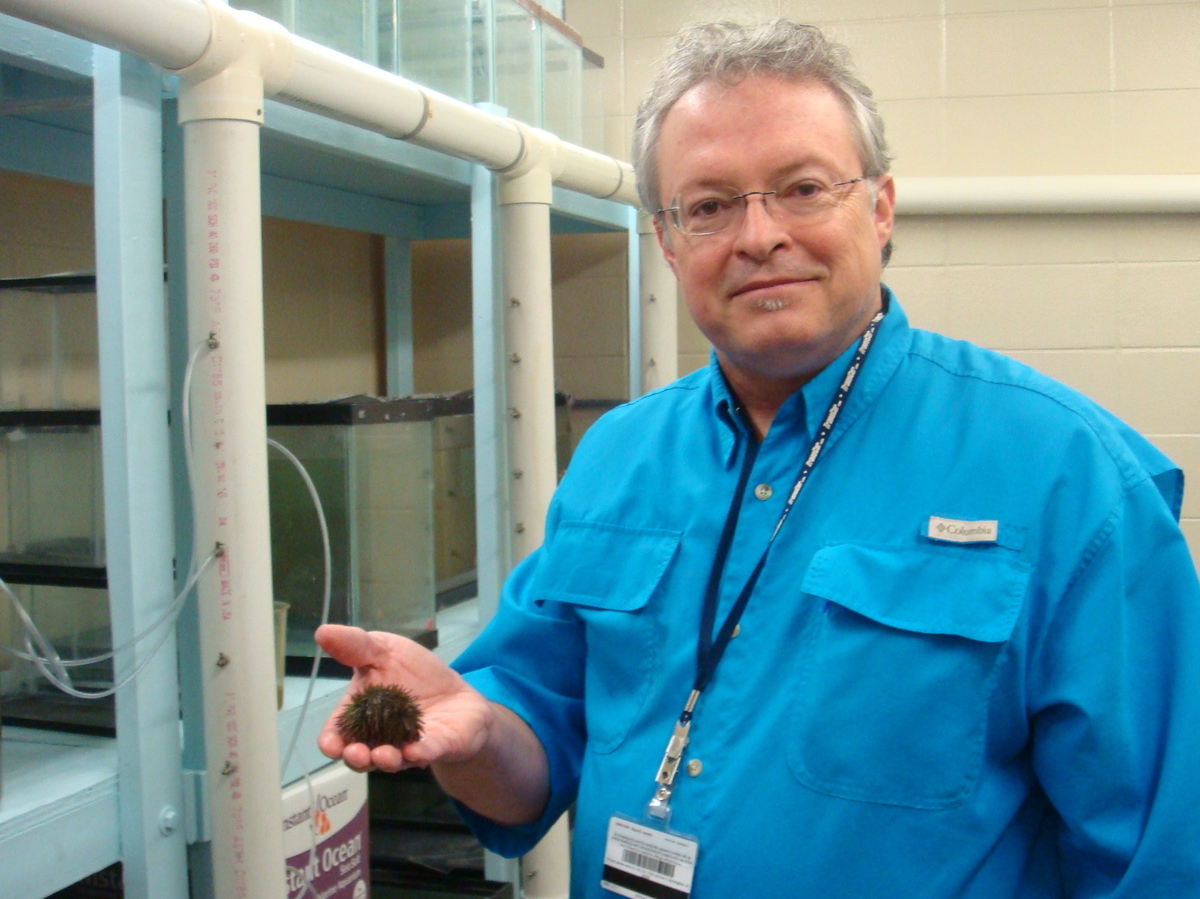 Stephen Watts, a biology professor at the University of Alabama at Birmingham, has been growing sea urchins in a lab for nearly two decades as a way to address overharvesting.

A few floors above his sea urchin farm, Watts pulls out metal trays with plastic bags filled with those spaghetti-like strands the urchin was eating earlier.

Watts says urchins, like many animals, are what they eat. And that's exactly what he's counting on. He's created a special feed to make his sea urchins taste better. Watt's feed contains essential nutrients that sea urchins would normally get from sea kelp.

So why not just feed the urchins kelp? Scientists used to do that, Watts says, but then they realized it could lead to overharvesting of kelp. When Watts started experimenting with feed a few years ago, he noticed that it seemed to change the taste of the urchins. So he decided to bring in someone with a more refined palate to confirm whether he was really onto something.

That's where the Hot and Hot Fish Club in downtown Birmingham comes in. Owner Chris Hastings, a James Beard award-winning chef, has been Watts' unofficial taste tester for about two years. (Every so often, diners at the restaurant will also get to savor a sample.)

So far, Hastings says, he's been impressed: "It was not only sweet, not only delicious, but it had that great umami — those flavor characteristics. I was pleasantly surprised."

With a stamp of approval from Hastings, Watts feels confident enough that his sea urchins will be successful in an open market.

But Glenn Richey, a member of the state's seafood marketing commission who also teaches at the University of Alabama in Tuscaloosa, warns that the feed Watts created for his urchins could potentially hurt him with consumers who have become increasingly wary of foods that have been altered or changed. The fact that the sea urchins are lab grown, not wild caught, Richey notes, might also prove to be an issue.

Meanwhile, Watts is facing another obstacle: money. Although his research is federally funded, that same money cannot be used to commercialize his product. So Watts still needs to find investors willing to help take his sea creatures out of the lab and onto a restaurant menu.