Accessibility links
Students Win Seed Money To Make Flour From Insects : The Salt The students plan to make the nutritious "power flour" with grasshoppers, weevils and caterpillars. Their goal is to make insect-based food products available year-round to people living in some of the world's poorest slums. 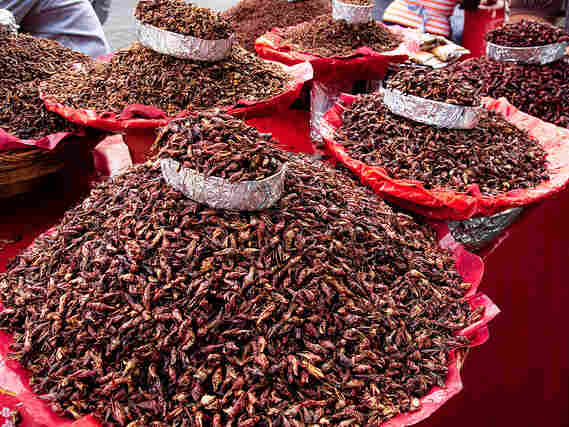 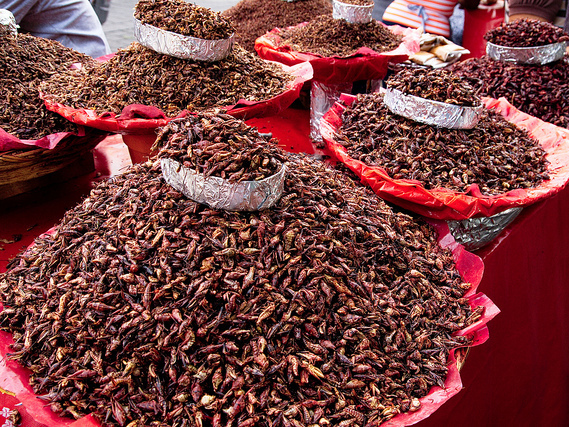 MBA students from McGill University in Montreal are building a company to mass produce grasshoppers, seen here at a market in Oaxaca, Mexico.

Mohammed Ashour has a big order to fill: By March 2014, he has to deliver 10 tons of grasshoppers to customers in Mexico.

He and four other MBA students at McGill University in Montreal have a plan to farm insects in poor countries and turn them into flour that can be used in everything from bread to corn tortillas. And on Monday, former President Bill Clinton handed them $1 million to make it happen.

The team, which includes Ashour, Shobhita Soor, Jesse Pearlstein, Zev Thompson and Gabe Mott, received the Hult Prize for social entrepreneurs at the Clinton Global Initiative's annual meeting. The seed funding will go to their project, Aspire Food Group, which aims to make insect-based food products available year-round to people living in some of the world's poorest slums.

The project is launching at a time when a lot of people are looking to spice up the idea of eating super-nutritious insects, which some are calling "mini-livestock." From the San Francisco Bay Area to Holland, insects are inspiring restauranteurs, entrepreneurs (check out the grow-your-own-locust kits) and researchers. As The Salt reported in May, the United Nations agricultural arm released a report supporting iron- and protein-rich insects for dinner because of their nutritional, environmental and economic appeal.

Making Food From Flies (It's Not That Icky)

"It's really been more of a niche market and geeky academics and gourmet chefs," Ashour says.

But he says that's changing, and there's now a market for his mass-produced insects. They've already held tortilla taste tests and have partnered with Inalim, a company based in Oaxaca that makes condiments like maguey-worm salt. Inalim will take care of packaging and distribution. "Our job will be farming the grasshoppers," says Ashour.

The first step is to collect a starter crop of grasshoppers from infested alfalfa fields, then distribute them to a group of farmers on the outskirts of Oaxaca. The farmers will be supplied with insect-farming containers, an idea the Aspire Food Group borrowed from a technique in Thailand involving garbage bins. Ashour says the containers look a little like Ikea closet units.

Lick your lips, locavores. "Power flour," as it's called, is going to be made with only "locally appropriate bugs." In Mexico, that means grasshopper. In Ghana, it'll be the palm weevil; and in Botswana, caterpillar.

Ashour says originally the group wanted to just stick with the cricket. "When this was in the armchair phase, we liked the idea of taking one insect and popularizing it everywhere." The cricket, he says, "has a great resume," in that it's easy to farm, and can be found almost anywhere. "But in Mexico, people don't eat crickets; they do eat grasshoppers."

What's next for him and his colleagues after getting the prize? "We have to go as soon as possible to Mexico to initiate the breeding," says Ashour. "By the end of March 2014, we'll have 10 tons."