Accessibility links
Birch For Breakfast? Meet Maple Syrup's Long-Lost Cousins : The Salt Want to top your pancakes with something other than maple? The alternatives vary, depending on the types of trees in a region. There's Kahiltna birch syrup made in Alaska, blue spruce pine syrup from Utah and Georgian black walnut syrup. 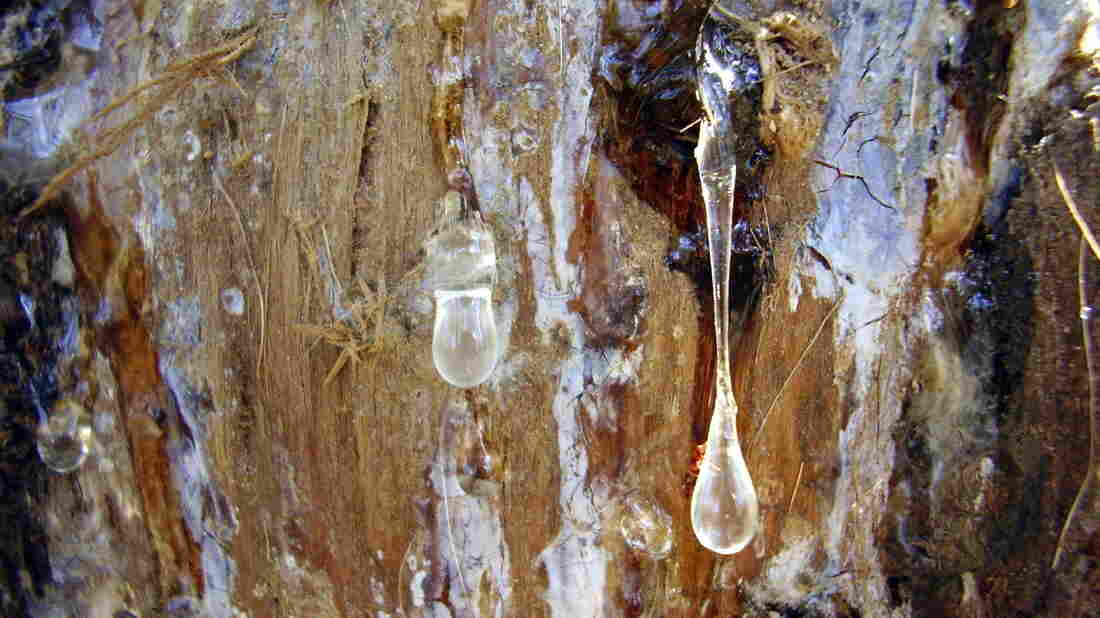 Beyond maple: Sap drips from a pine tree. Around the nation, producers are making syrup from the sap of pine, birch, even black walnut trees. iStockphoto hide caption 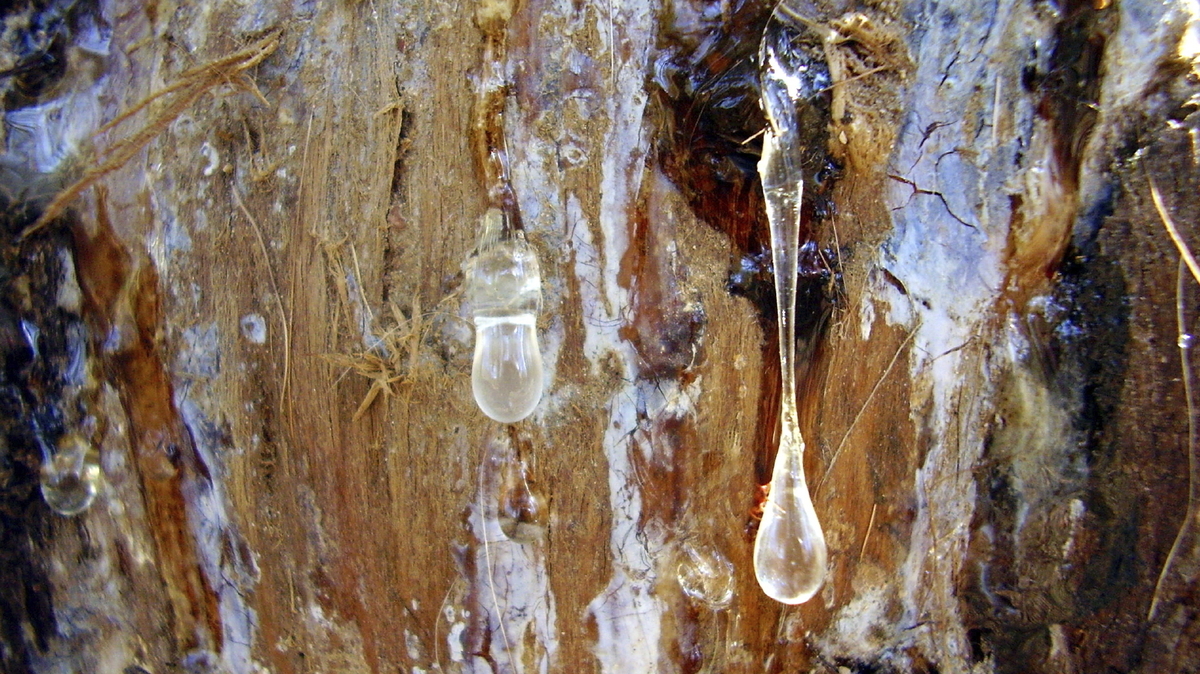 Beyond maple: Sap drips from a pine tree. Around the nation, producers are making syrup from the sap of pine, birch, even black walnut trees.

Americans have a longstanding love affair with maple syrup. According to the USDA, production of the sticky stuff in the United States totaled 3.25 million gallons this year. However, it isn't the only tree syrup that's available to drizzle on your short stack or sweeten your latte.

The Aunt Jemima alternatives vary, depending on the types of trees there are in a region. There's Kahiltna birch syrup made in Alaska, blue spruce pine syrup from Utah and Georgian black walnut syrup.

"I've made syrup from yellow birch, white birch and butternut trees," says Sam Thayer, a professional forager and author of The Forager's Harvest, who lives in, fittingly, Birchwood, Wis. 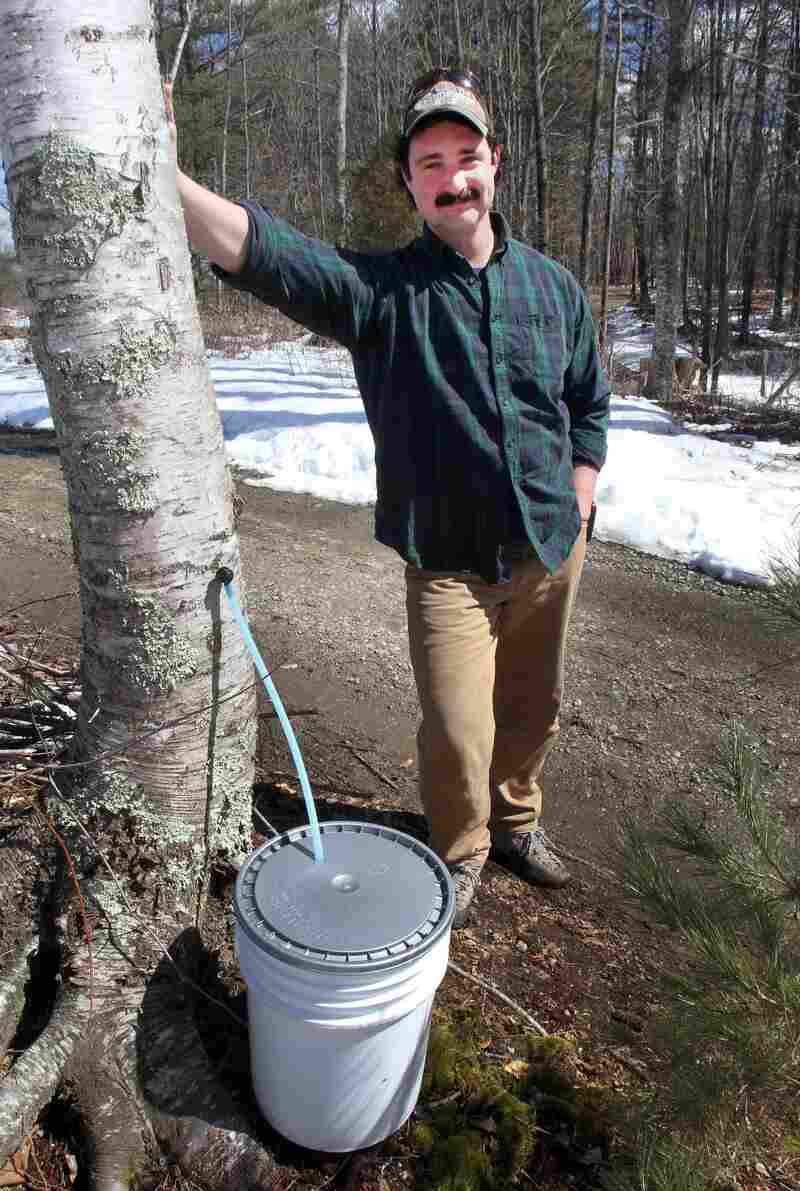 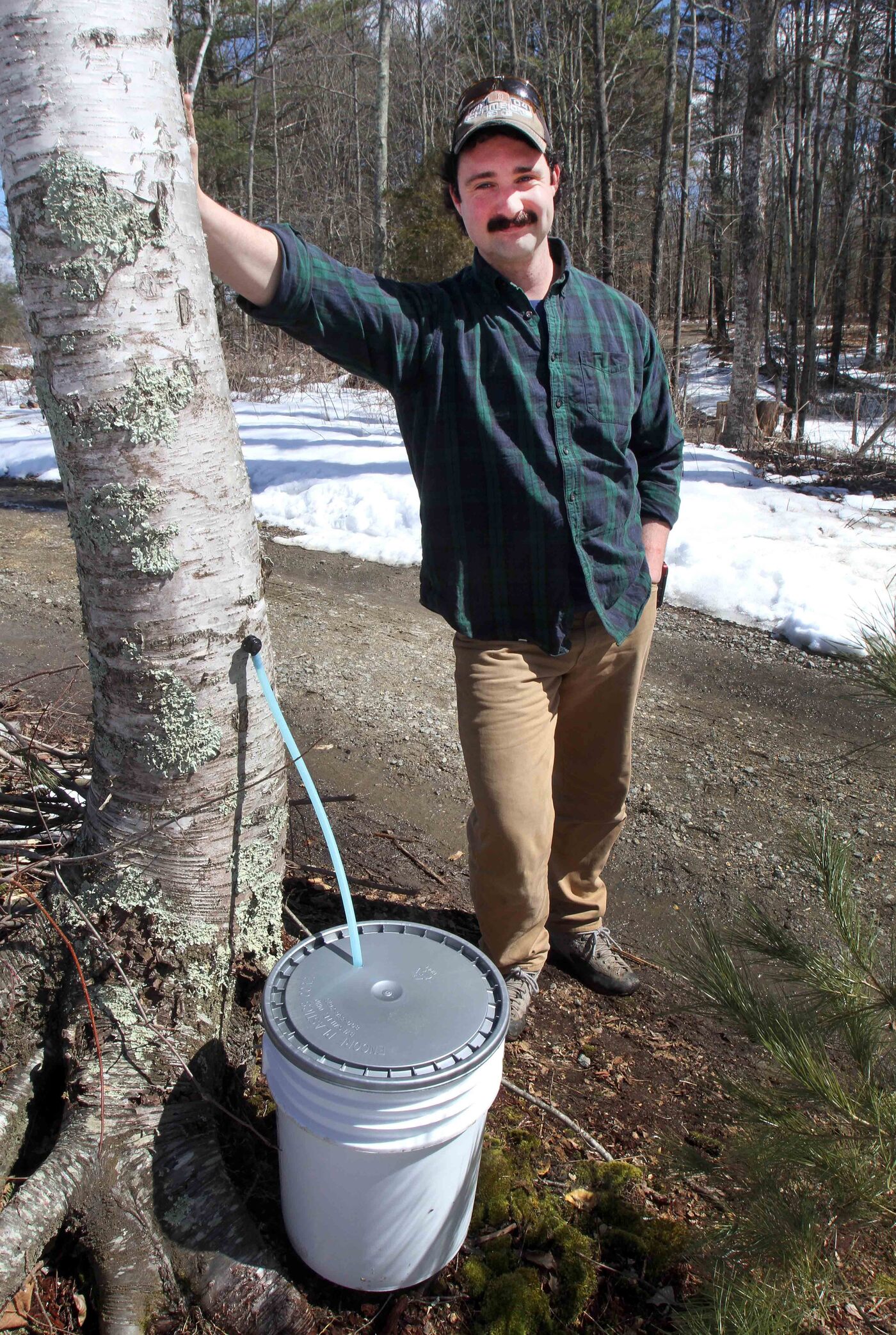 David Moore of the Crooked Chimney sugarhouse poses in front of one of his tapped white birch trees, in Lee, N.H. Moore produces commercial birch syrup.

Like sugar maples, these trees possess a sweet sap that can be boiled down. Producers generally collect the clear liquid using traditional maple sugaring methods. During the spring thaw when the sap is running, they drill a hole in the tree's trunk, put in a spout, and hang a bucket.

The time, effort, and expense that goes into harvesting up to 100 gallons of birch syrup to produce a single gallon explains why you don't often find it on supermarket shelves. "It's not that no one is interested," says Thayer. "It's that the price is prohibitive, because it's harder to make."

Another consideration is flavor. "Though you can barely tell butternut syrup apart from maple syrup," says Thayer, "my birch syrups taste like you mixed molasses with concentrated apple juice."

Dina Falconi, author of Foraging & Feasting: A Field Guide and Wild Food Cookbook, makes black walnut syrup in the Hudson Valley region of New York with her husband. "It's slightly astringent and bitter, so it's not a mainstream flavor," she says.

By comparison, maple syrup not only has a palate-pleasing flavor, but it's relatively easy to find enough trees together to economically produce syrup. 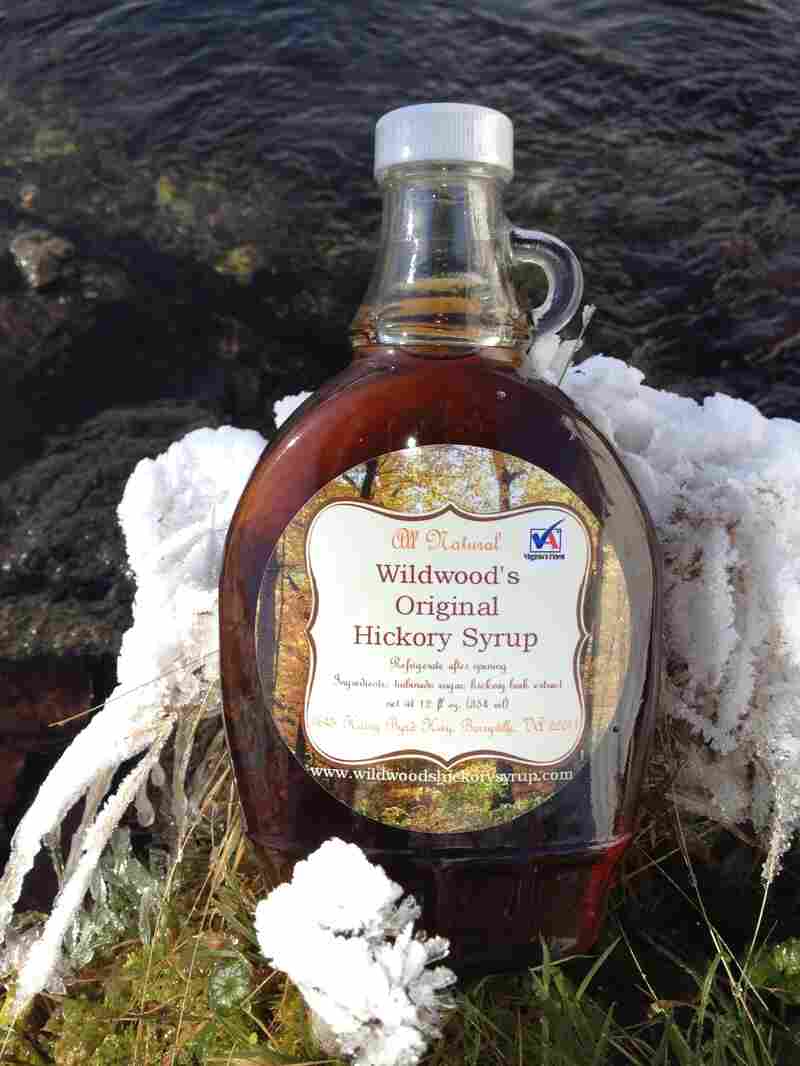 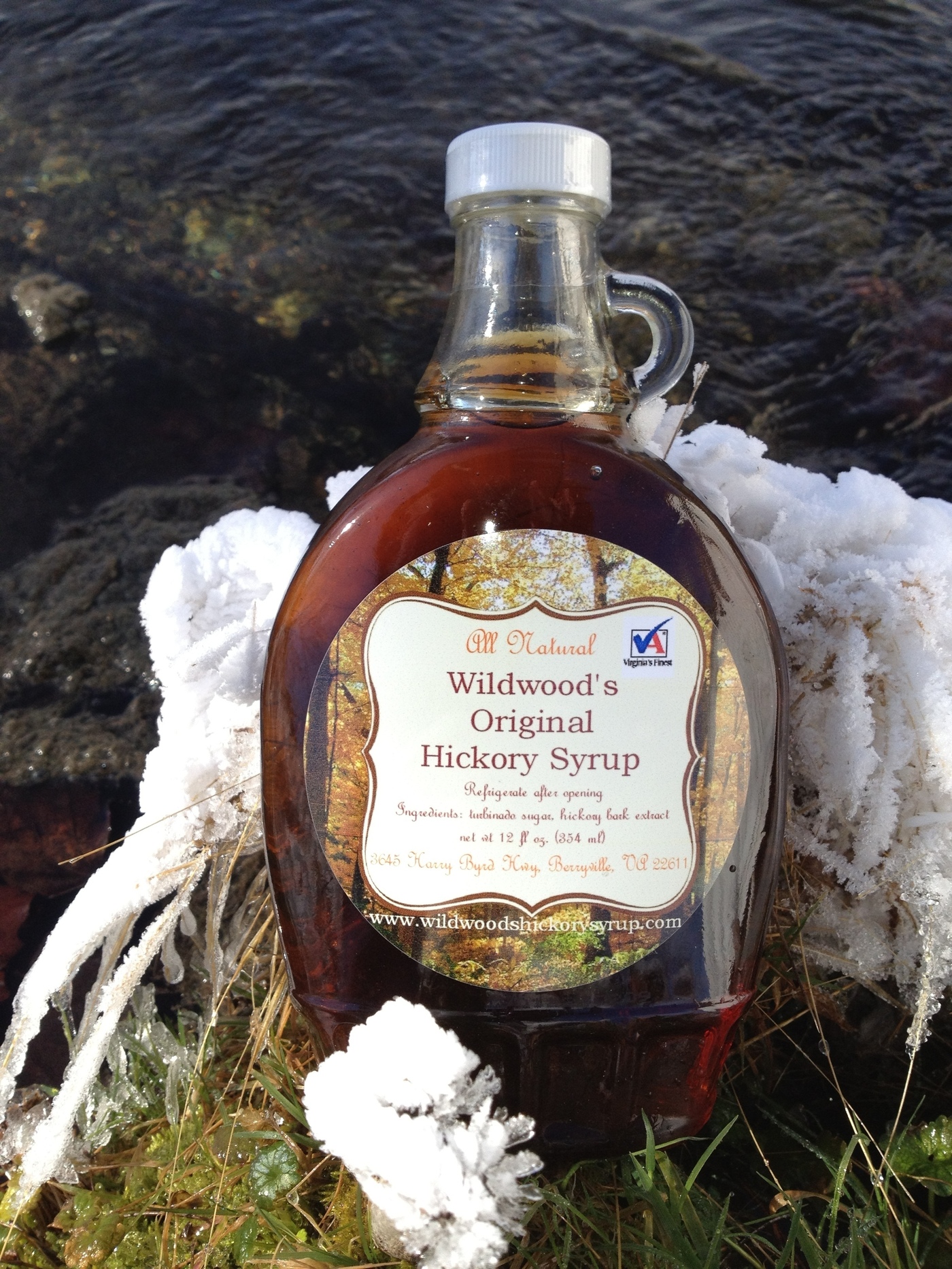 Essence of hickory bark and simple syrup are used to make Wildwood's Original Hickory Syrup. Its maker, Travis Miller, describes the flavor as "a little woodsy, with a smoky background."

"Maple syrup's popularity partially comes down to the prevalence of the trees," says Thayer. "Before the colonization of North America, sugar maples were the most prevalent plant by biomass in the regions that are now our maple-producing regions. No other broad leaf tree came close in terms of its abundance."

Syrups don't necessary come from saps, though, and they're not all traditionally used as a sweetener. "The Iroquois used to make what they called a 'concoction of the bark' from hickory trees to treat arthritis and headache relief," says Travis Miller, co-owner of Falling Bark Farm. "They'd make a poultice with it or inhale the steam."

These days, Miller and his wife, Joyce, produce Wildwood's Hickory Syrup as a maple alternative. Though they originally hand gathered the naturally shedding bark from shagbark hickories in the woods surrounding Berryville, Va., they now source it from a supplier.

First, the bark is scrubbed clean and roasted to enhance its flavor. Using a pressurized process, flavor is extracted and then made into a tea. Since there's no naturally occurring sugar, this solution is infused into simple syrup. The results, according to Travis, "are a little woodsy, with a smoky background."

Most of these regional alternatives to maple remain just that — regional, though more of these syrups are coming onto the market.

For their part, the Millers sell their smoky hickory syrup online, at farmers' markets, gourmet groceries, and historical sites, such as Mount Vernon and Monticello. Travis says that "99.99 percent of the people we come into contact with have never heard of it. But when they taste it, it evokes memories for them. One guy just told me that it reminded him of his grandmother's log cabin in Tennessee."