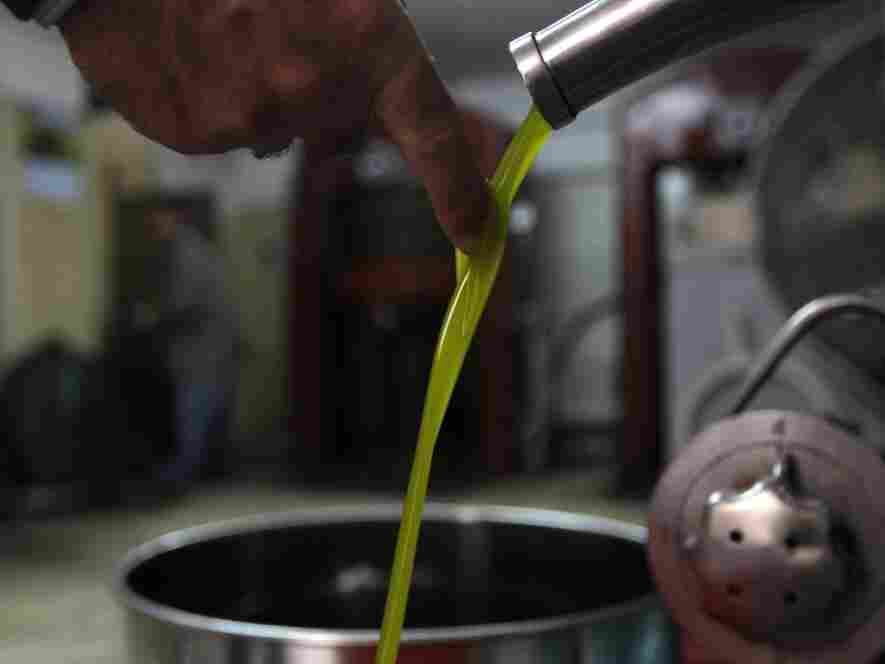 Experts say lots of factors determine how quickly an oil deteriorates — from the variety of the olives, to how the oil is produced and stored. Matthias Schrader/AP hide caption 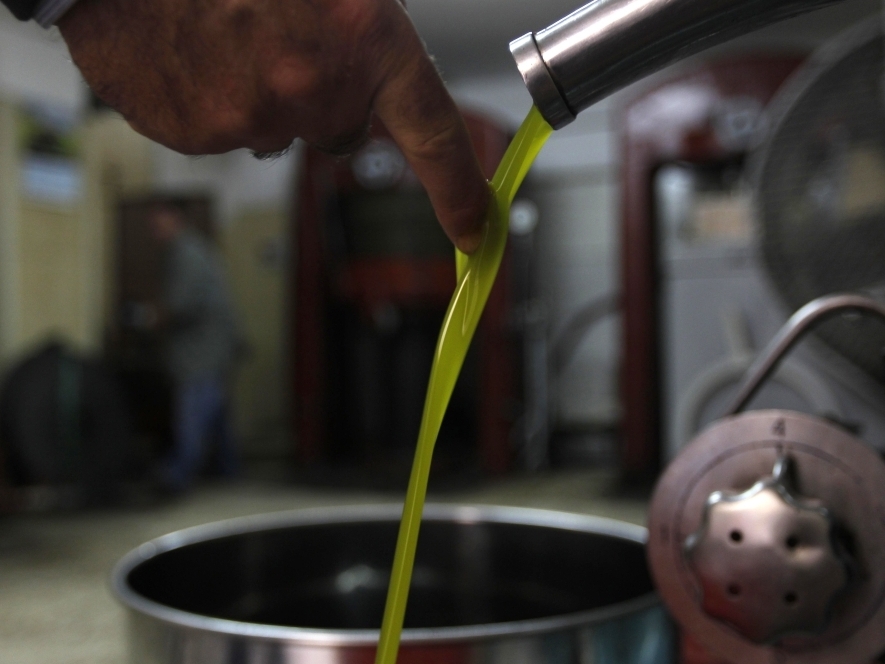 Experts say lots of factors determine how quickly an oil deteriorates — from the variety of the olives, to how the oil is produced and stored.

The Mediterranean diet is a pattern of eating that lately has become a darling of medical researchers. It includes vegetables and grains, not so much meat and, of course, generous portions of olive oil.

Mary Flynn, an associate professor of medicine at Brown University, says the evidence that olive oil is good for your heart has never been more clear. "Olive oil is a very healthy food," she says. "I consider it more medicine than food."

She points to a big study published earlier this year in the New England Journal of Medicine where researchers in Spain had men and women in their 50s, 60s and 70s who were at risk of heart disease follow one of three diets.

"So, they could compare the three diets: Was it nuts, was it olive oil or was the low-fat diet beneficial?" says Flynn.

And what researchers found was that a Mediterranean diet rich in olive oil cut the risk of heart attacks and strokes by 30 percent. The nut group, which was consuming olive oil as well, did well, too.

"The fact is, there are a huge range of benefits of real extra-virgin olive oil," notes Tom Mueller, who has spent the last six years investigating and writing about olive oil. He says olive oil is good for two reasons: It's mostly unsaturated fat, and extra-virgin oil, which is the highest-grade and least-processed form of olive oil, contains a whole range of other beneficial plant compounds called polyphenols.

But here's the catch: Unfortunately, it turns out that more than half of the extra-virgin olive oil imported into the U.S. has been shown to be substandard.

"The fact is, it's quite often just very low-grade oil that doesn't give you the taste of the health benefits that extra virgin should give you," Mueller says. 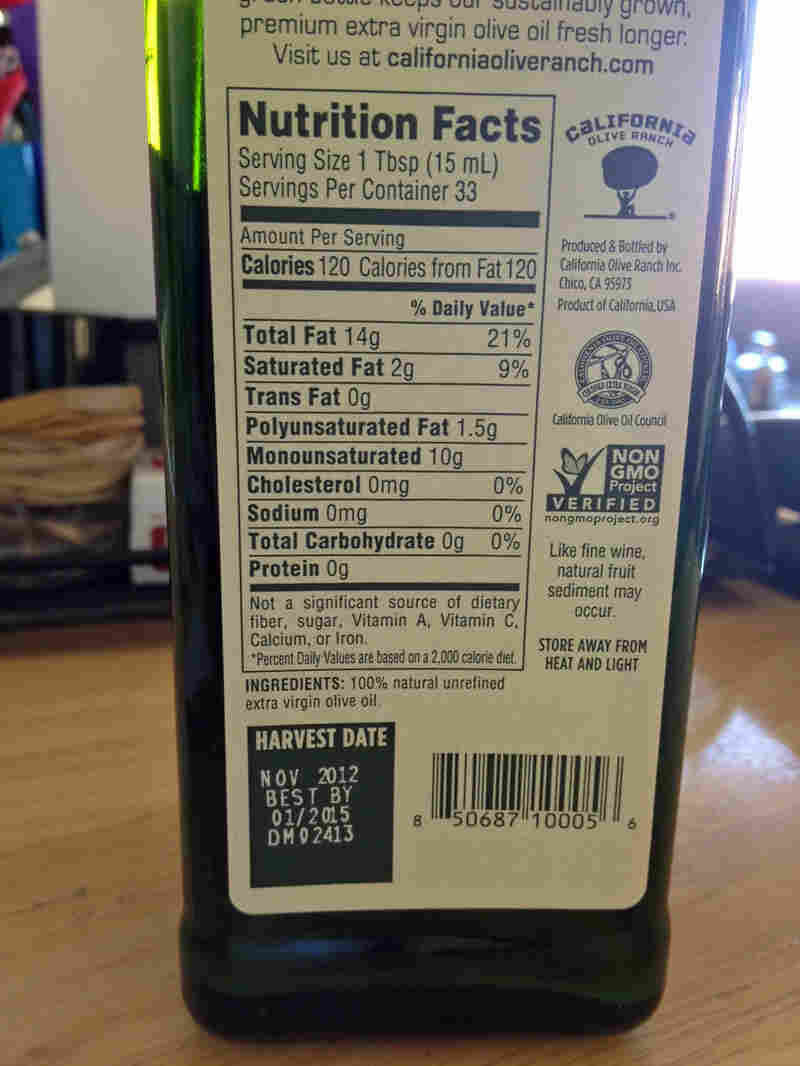 In fact, a study from the University of California, Davis, found that 69 percent of imports tested failed to meet a U.S. Department of Agriculture quality standard.

And Mueller says in some cases the oil is just too old. By the time imported olive oil reaches us, it has often been shipped from place to place and sometimes not stored well. Even if it's not noticeably rancid, many of the heart-healthy compounds have degraded and fizzled.

"Extra-virgin olive oil is fresh-squeezed juice — it's a fruit juice — therefore freshness is a critical question," he says.

Mueller says the U.S. Food and Drug Administration used to police olive oil imports to ensure producers were meeting quality and freshness standards. But those efforts have fallen off.

So, where does that leave those of us who want to get our hands on the healthy stuff?

Well, for starters, Mueller says look for brands that carry a harvest date on the bottle. California Olive Ranch oil, which is sold in lots of chain supermarkets nationwide, has a date clearly stamped on the back of the bottle.

Gregg Kelley of California Olive Ranch says every single bottle produced by his company includes the date that olives were harvested to produce the oil in the bottle.

And he says the olives were pressed very quickly, so the oil is really fresh.

"The most important thing for consumers to remember when they're purchasing extra-virgin olive oil is that it is not wine: It does not get better with age. It's never better than the day it was produced," Kelley says.

Now, as long as the olive oil is properly stored, the freshness will hold in the bottle at least for a while. Some bottles now carry an expiration date. 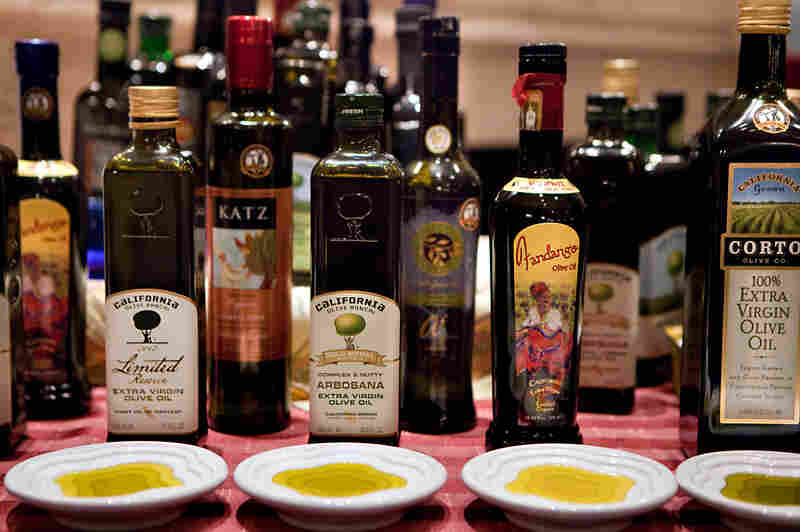 But as soon as you open the bottle and expose the oil to oxygen and light, it will slowly start to degrade. So, Mueller says, don't make the same mistake his family made.

"I grew up with terrible oil; I had a huge tin in my grandparents' cabin and that was olive oil for me — it was moldy and fusty and there for years," he says.

Experts say a lot of factors determine how quickly an oil deteriorates: everything from the variety of the olives, to how the oil is produced and stored

But generally speaking, "we usually see that oil is no longer good after four to six months after opening," says Selena Wang of the UC-Davis Olive Center.

Oils with the highest levels of heart-healthy compounds tend to be pungent and peppery. Mueller says if the oil stings the back of your throat a little that tells you the beneficial polyphenols really are there.

"Once you have that taste, you get used to the bitterness and pungency, you never go back," says Mueller. "It's a completely different experience."

And a healthy one, too.